Back in November 2018 I posted a link to a video of the deflection on a katana blade as it cuts through some rolled-up matting. [stderr]

It is always impressive to watch steel deflect. The stuff is like thick clay when it’s heated above normalizing temperature (over 1800F, roughly) but when it’s been hardened and tempered it comes alive and every work-piece has its own resonant frequency and generally it won’t bend unless you put it in a vise and use leverage, or hammer on that. I am thinking of that right now because I spent the afternoon experimenting on a little letter opener blade made from scrap, and damn is it stiff and tough. It looks like it ought to snap from hand-strength alone but trying to break it bare-handed would result in a trip to the emergency room and now is a bad time for that. 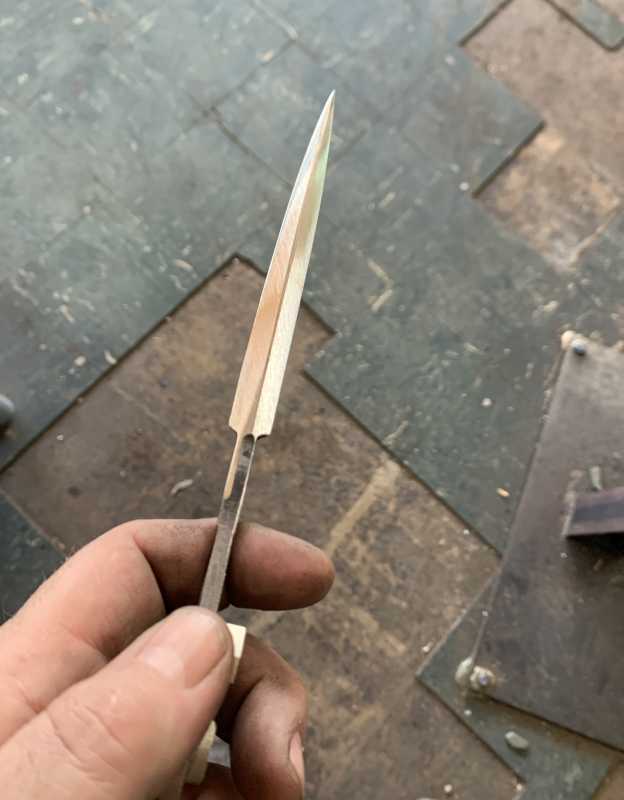 it’s practically an arrowhead (only about half ground)

There are varieties of “internet tameshigiri” that I shy away from watching. One of the worst, in my mind, are the ones where there is someone cutting and, on the other side of the target, there are a bunch of people sitting around watching. Sitting right where, you know, the end of the blade is going to come whizzing like a vengeful flying hunk of death if the sword fails during the cut. There was a tragic accident many years ago, in which a master swordsman – legitimately, a serious and very experienced person – had the blade disassemble from the handle and fly into the crowd, killing a little girl and injuring several other people. The master committed suicide some time later. It’s also one of the reasons I have trouble watching Forged In Fire – Doug Marcaida may know how to adeptly wield little whacking sticks but he handles a sword like it’s a baseball bat and it’s just scary to watch when you know that a) there are other people in the room and b) the blade was made under time pressure. Because “hurry up and make blade faster!” is exactly the way to get good results from people. Ugh. I’m embarrassed for Marcaida who, obviously, is a martial artist who understands “practice” yet has apparently declined to give more than a passing thought to sword-handling.

Walter Sorrells, another modern swordmaker, thinks about this stuff carefully and does lots of testing; I respect him and his work. At some point someone was asking him about tameshigiri and he explained that he could make a sword that cut mats incredibly well, by making it thin with very flat bevels, but it would be weak if you tried to use it to parry or if you hit the target at anything other than a perfectly correct angle. When your angle is not perfect, the blade can deflect, which makes the angle sharper, which makes it deflect more, which makes the angle sharper until the blade bends permanently or snaps. A proper katana blade ought not to snap like that because the steel at the edge is the only part of the blade that is hardened – although I’ve seen fancy-looking Japanese-style blades that have hardening patterns all over them, for appearance, which might mean that the blade has some built-in fracture-points. Keep that one away from Doug Marcaida.

Anyhow, this one is pretty intense.

As my friend Eric V.S. said, “will they begin making armor out of diet coke bottles next?”

There are a fair number of martial artists on instagram who appear to me to be waving swords around, as if they are cheerleaders’ batons and not lethal weapons. One of the things the swordsman is attempting to achieve in iaijutsu practice is precision – exact alignment of the blade, tip stopping exactly in the right spot as if it’s nailed there, body and blade movement focused so as to maintain control while doing something that is dangerous even to the wielder. It drives me completely nuts when I see someone waving a sword around like its a toy – I think I blame the wushu schools of Chinese swordsmanship as demonstrated in Crouching Tiger, Hidden Dragon – whirling a dull blade around like it’s a weedwhacker or something. That fosters bad habits because it’s one great big bad habit.

Swordsman accident: The blade of a katana is held in place with a single (sometimes double) peg called a “meguki”. That whole mass of razor-sharp death depends on a little piece of bamboo a bit thicker than 1/4″ and about a 1″ long. The reason that it works at all is because all of the other pieces of the sword are carefully fitted to the blade so there is basically zero “play”, which means that the impact transfer from blade to handle and furniture is very even. Ideally. Cutting practice hammers even a well-made blade/handle pretty hard and you can induce wear that is more or less invisible. This is why many of the samurai had special battle handles for their swords, which were basically wrought iron, with an iron meguki: you don’t want your sword to spontaneously disassemble in a the middle of a battle. The reason the master swordsman killed himself was because he knew that the rest of his life, he would serve as an example to others of what not to do.

Always a Complainer » « A New Effort