We continue the saga of the splintered resin/wood bowl.

To get to the bottom of the bowl, we have a problem: it’s what the chuck holds onto. You do not want to get a hand or tool near, or embroiled with, the chuck when it’s spinning. So, what to do?

I’ve seen a variety of such arrangements, usually involving nice pads and urethane rubber, but I decided that, since I was going to further polish the inside of the bowl, it didn’t matter if I scraped it a bit. So I made a plywood disc that fit into the mouth of the bowl and attached the chuck ring to the plywood, then put another plywood disc in the recess at the back and pressed the whole thing together with the tailstock. 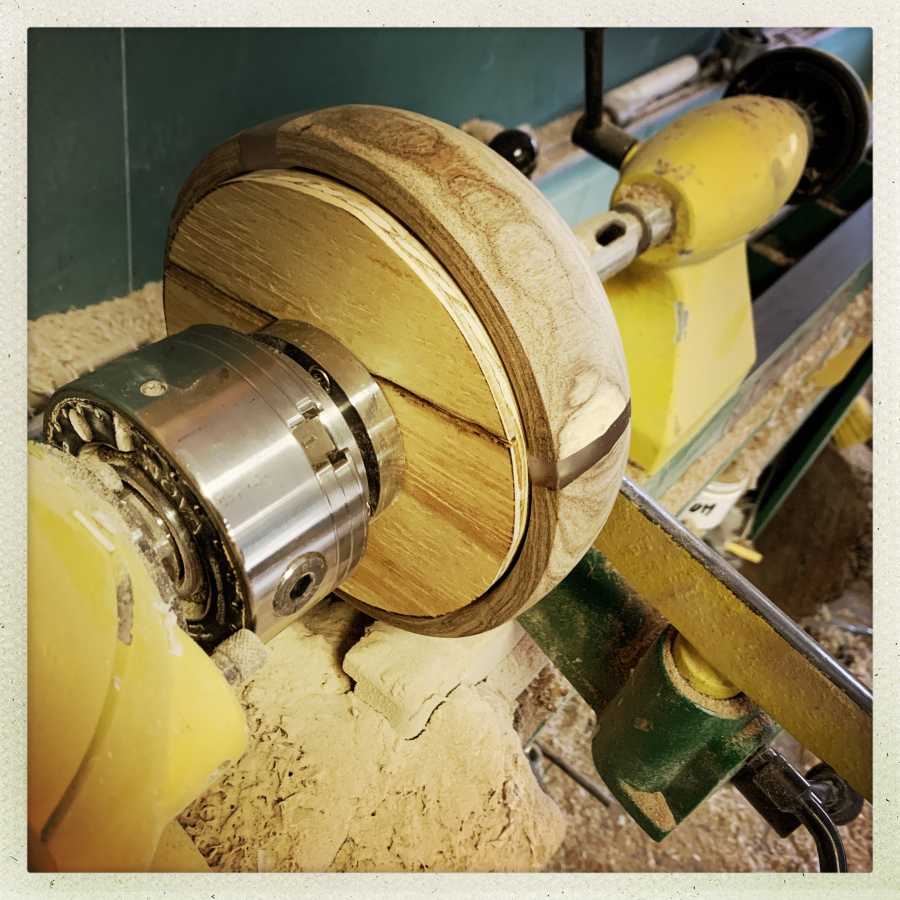 I was surprised how smoothly it worked; the pieces fit so well that there was no wobble in the bowl at all, although I was painfully aware that there was an exposed edge of plywood there, which would act like a saw on anything it came in contact with. So I put the work-rest forward and carefully shaped the bottom with the skew chisel, then sanded it with a block of wood with sandpaper glued to the front. 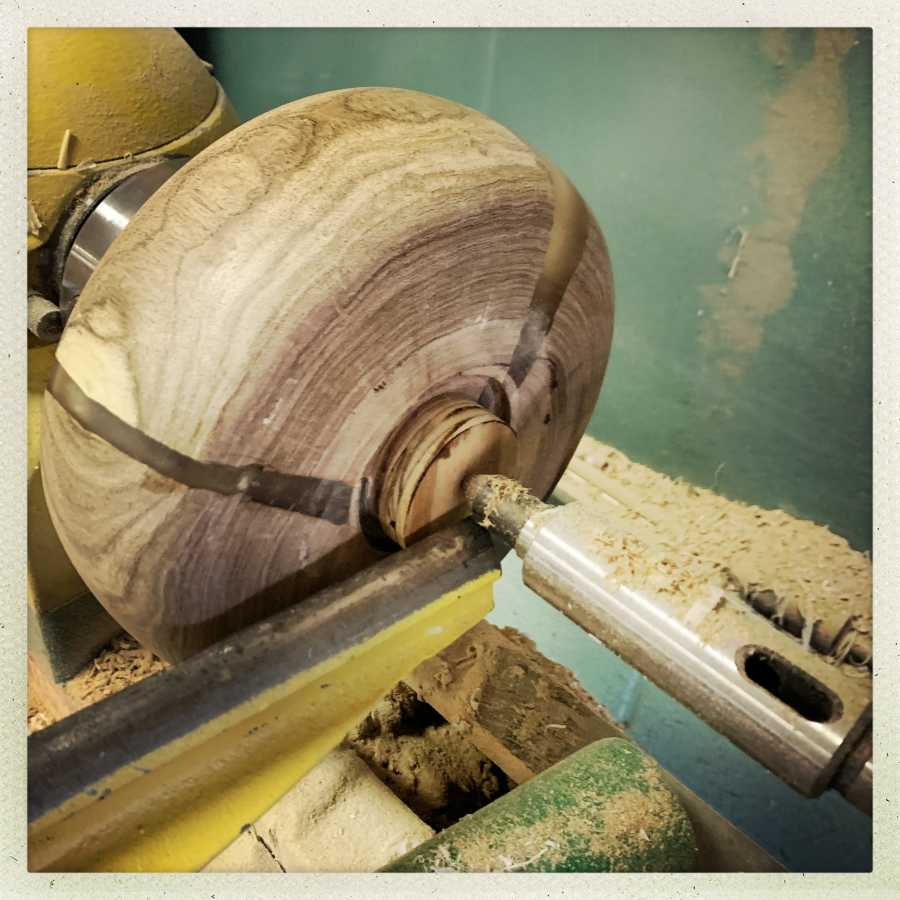 After that, I felt mightily chuffed. I had managed to do some hard things and everything was turning out lovely. There were a few chips from the carbide bar on the inside of the bowl, and I decided I’d flip the thing around and give it just a touch with a round-nose dull scraper, then sand it and call it done.

I was getting tired and I stuck the scraper in at the wrong angle, it bit, and the bowl shredded apart in an instant, sending wood flying around the room like confetti.

Fortunately, I have adopted a policy of never standing on the axis of my work, so mostly all the big pieces of wood shot past me on their way to somewhere else, but I got a pretty good lesson in “don’t do that” and “here’s why.” I already emphasized using chisels with long handles so I don’t need to get close to anything that’s moving, and I feel that decision is vindicated. 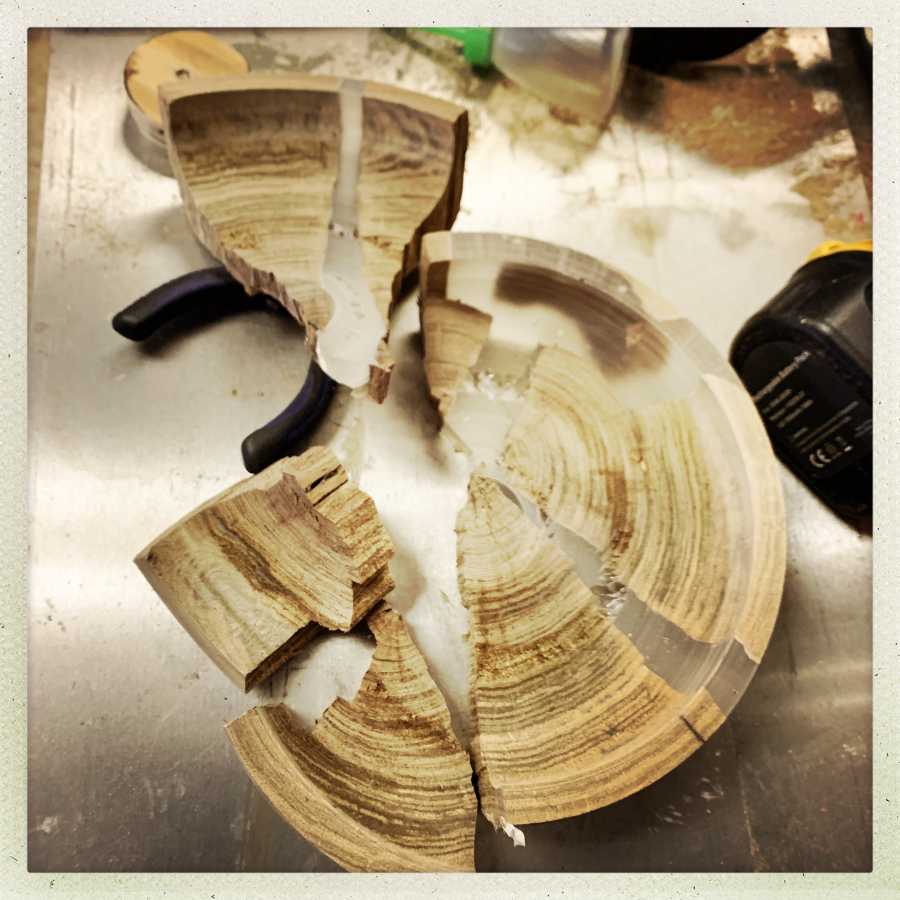 That’s tough material, and the lathe just ripped it apart like it was an eggshell. You can see the huge gouge in the face (near the center, around 3:00) where the scraper bit.

This last picture is interesting: 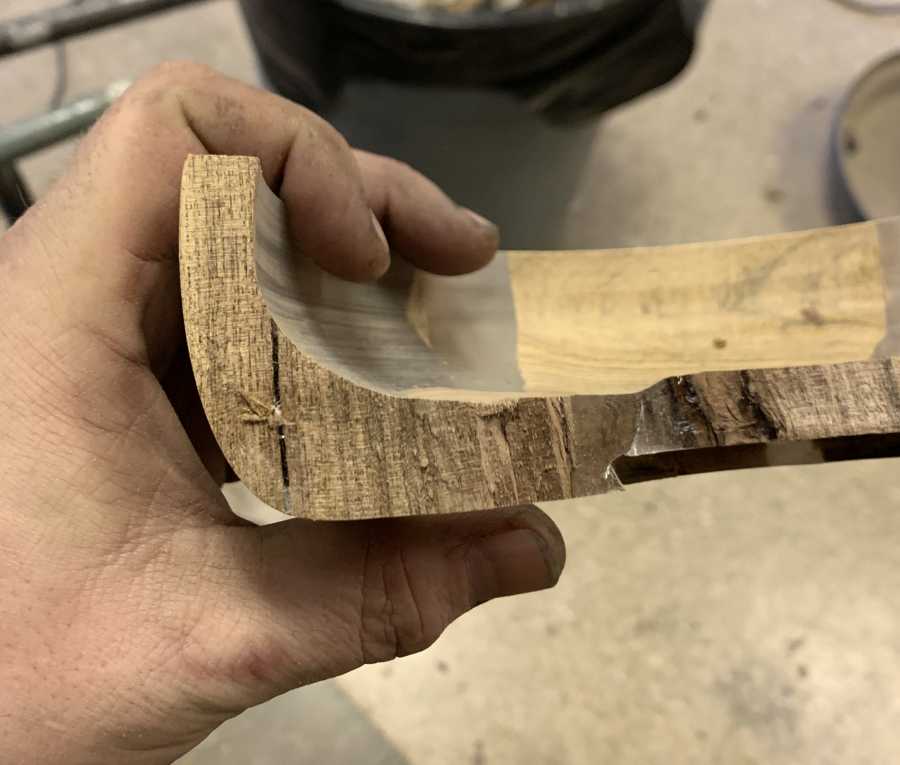 You can see the lovely dovetail I carved into the bottom recess (with a parting tool) and the graceful curve of the inner bottom. I was really happy about that and now I know what it’ll feel like when I do it again. I took some of the chunks and beat on them and stomped on one, to see if it was just that the material was fragile, but the chunks were still very strong. It’s just that the lathe and the scraper were even stronger. There’s a lot of leverage there.

Live and learn, so long as ye live.

One of the reasons I wanted to describe what is otherwise a massive failure is because I think a lot of the craftspeople on youtube don’t talk about the projects that failed. They wind up looking a lot more successful than perhaps they really are, that way.

Sunday Sermon: Not So Good For A Dry Run » « Another Resin Composite