There are a lot of woodturners on youtube that mix wood and resin, then turn it on the lathe.

It seems pretty easy but it turns out, it’s not. There are subtleties and I’m trying to navigate them, just for the heck of it. I have a bunch of other stuff on my bench that I should be working on but I’m distracting myself and blaming the coronavirus and the Trump administration.

This is an early experiment: I had a piece of wood that was heavily cracked and I worried that it might fly apart under the chisel. So I put it in a ziploc bag with some resin and vacuum cycled it a couple times to drive the resin into the cracks. Then, I made a sort of cup-oid from it. 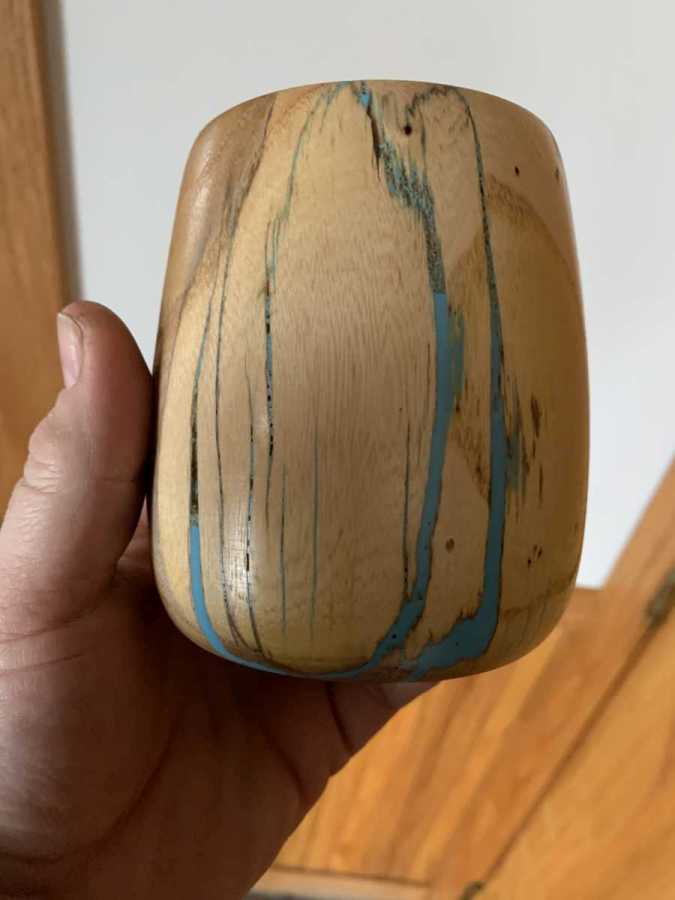 As you can see, it kind of looks like poo where the resin didn’t go. It appears to me that there just are not enough big areas of resin – larger regions of different material would be more dramatic.

So, back in December, I took some bog oak and arranged it in a bucket by gluing it to the bottom, then poured resin over it. It was too big to put in the vacuum chamber to I just let it take its chances. It came out looking promising so I finally got around to attaching a chuck ring to it and giving it a go. 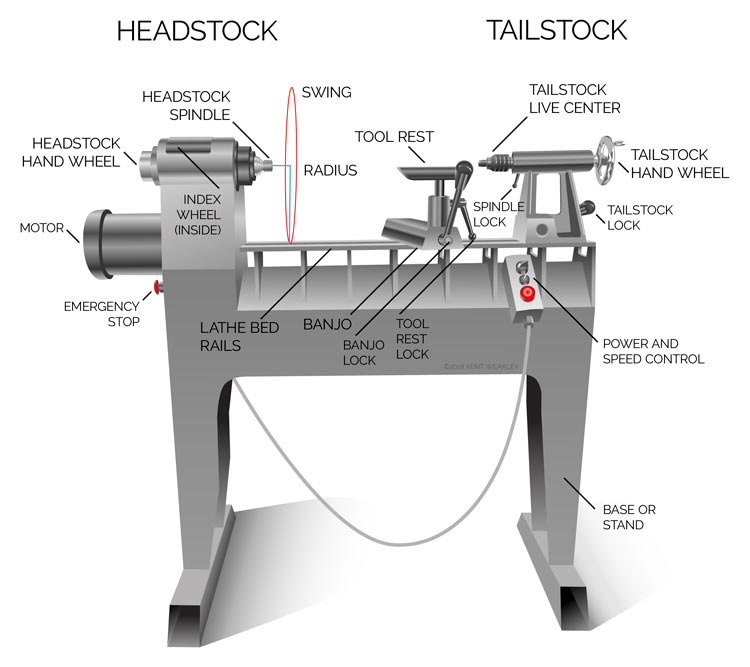 Let me digress briefly into “chuck ring”; in the 1970s when I learned to turn wood, you attached the object between a spiked taper and a smooth spike that the piece could spin against. [turnabowl] So, you had a spike in the tailstock and a driving spike in the headstock and woe betide you if the spindle lock on the headstock was loose because the spike might loosen and the whole thing would launch itself across the room at you. Nowadays we use a chuck that looks sort of like a machinists’ chuck you’d find on a metal lathe, which locks into a metal ring that you attach to your work-piece with screws. Or, if the work piece is the right shape, you just chuck it right in and crank the chuck tight and turn away, without a supporting center in the tailstock. 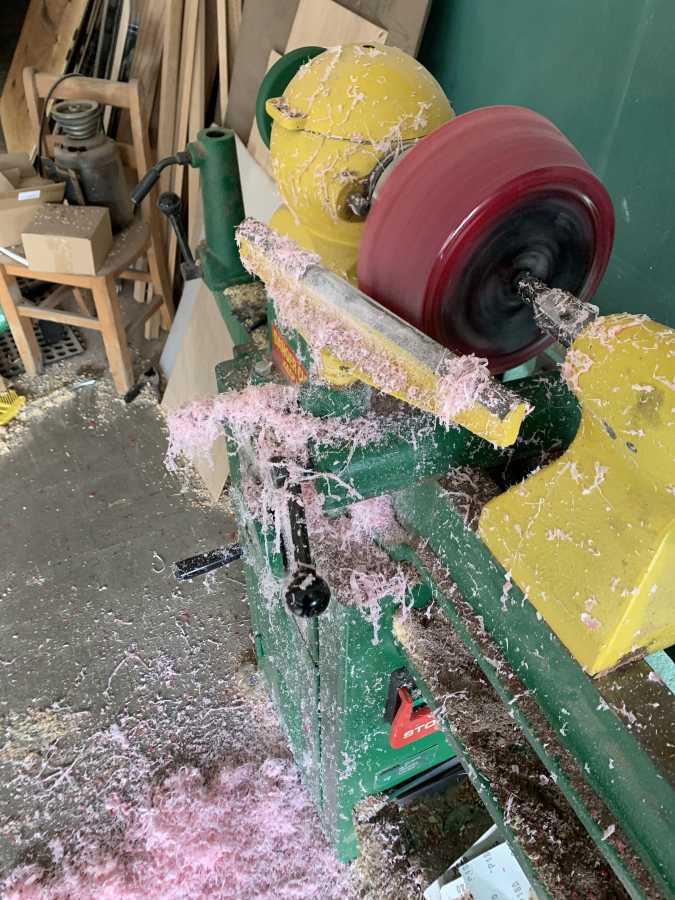 It’s going 1200rpm there but you can see the center on the tailstock pretty clearly. The ring is on the other side. The really great thing about the ring is that it’s mounted very positively, so you can take the work off the chuck, bring it home and mess with it, then it’ll go back on and still be balanced correctly. This is not precision machining. It’s really convenient and the use of the chuck has greatly changed how woodturning is done; it’s safer and more reliable and accurate. 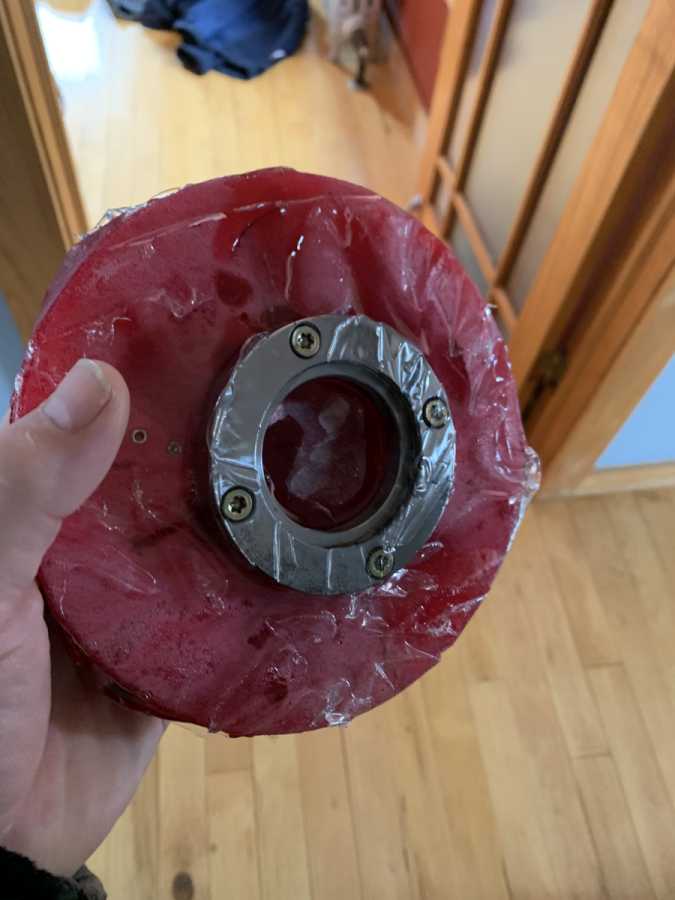 The screws are going into the part of the wood that is going to be the open end of the bowl, so that’s all going to get removed. What you do is do most of the shaping with the ring screwed in, then remove the ring, flip the bowl around, and attach it to the chuck from the other side of the gonna-be-a-bowl-eventually-thing. That is done by using a chisel to make a large clear round area with a lip, and you grab it with the chuck by putting the chuck’s teeth inside the lip and opening the jaws to grab it. It’s also a very positive grip assuming your work piece is not going to splinter completely to pieces.

You can see that lip in this picture: 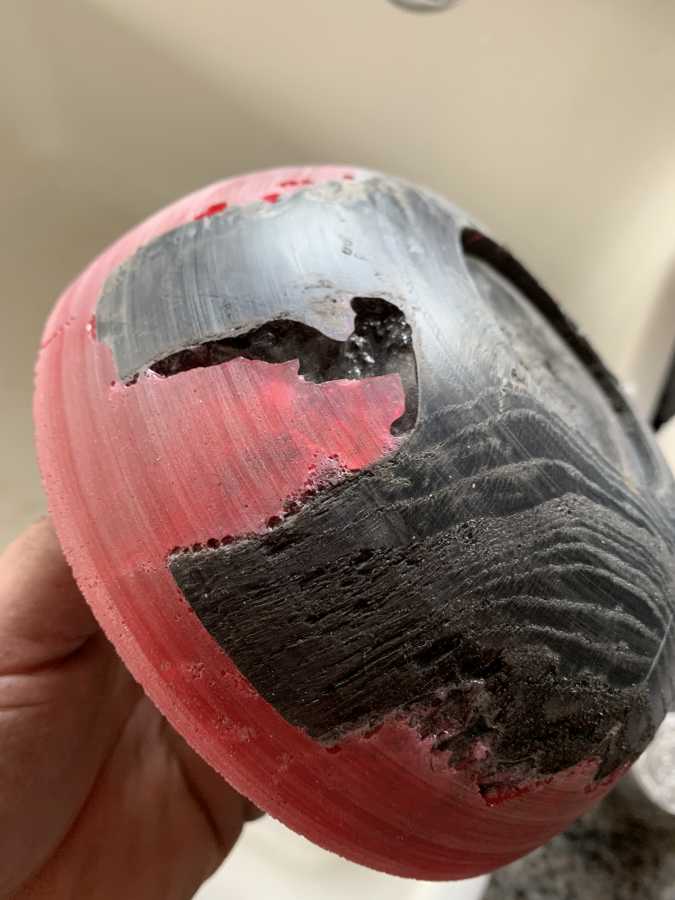 You can also see the problem: there are big voids in the resin. The chisel catches in them and chops great big pieces of resin off and they go shooting all over the room and the Marcus. Resin is really tough and so is bog oak and I had to keep resharpening my chisel every few minutes.

The thing was clearly heading toward disaster so I decided to take it home and try to flow some more resin into the voids. Right when I was deciding that, the chisel caught the chuck and the whole thing came off and flew right at me at 1200rpm, hitting my left hand and bouncing past my shoulder. And that’s why I use long-handled chisels – I like to work at a distance with my body offset from the line of fire. The resin, by the way, was completely unbothered by the bouncing; that’s some tough stuff. The back of my thumb did some bleeding and looks like it’s been chewed on by something but it’s very minor in woodworker/knife-maker’s terms so I more or less declare it as “does not count.” 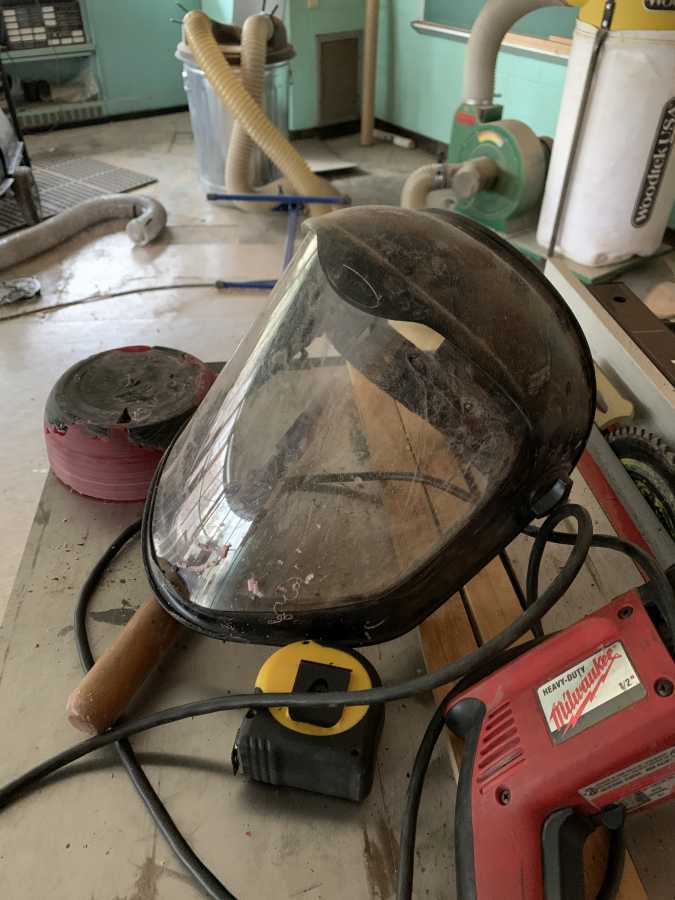 I wear one of those face-shields that covers your chin and neck, which is a good idea when you are working on things below the level of your shoulders. There are stories of people who wind up with a skew chisel in the neck, but I assume that’s a fairly rare outcome involving lots of bad luck or foolhardy practices.

Last night I made a small batch of clear resin and poured it into a heavy duty ziploc bag, then added the work-piece, squeezed the air out, and wrapped it with tape to keep the bag in contact with the wood. 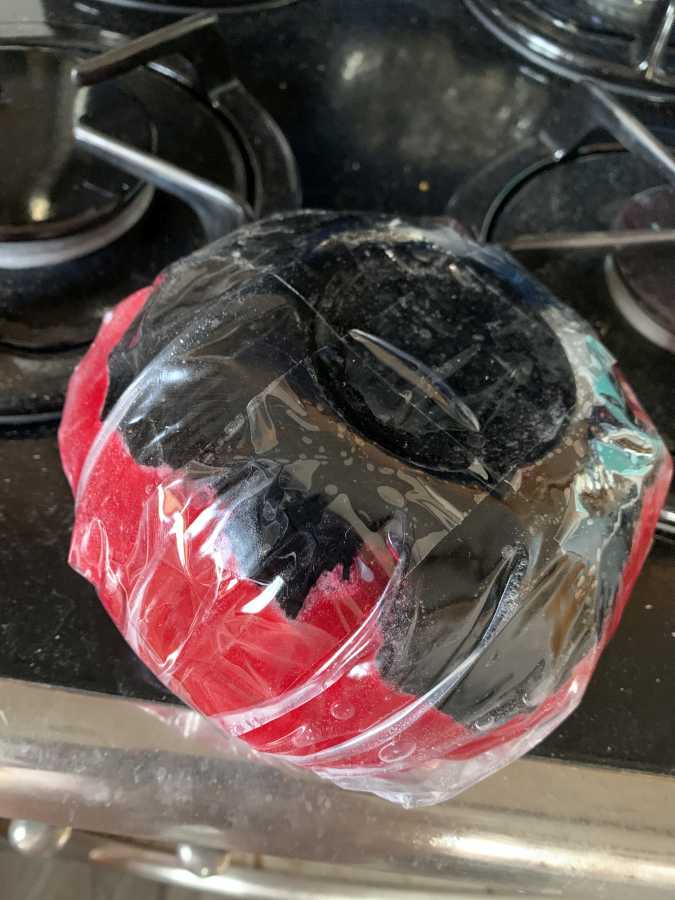 This morning when it was cured I pulled the bag off and it looks like I filled those pesky holes. 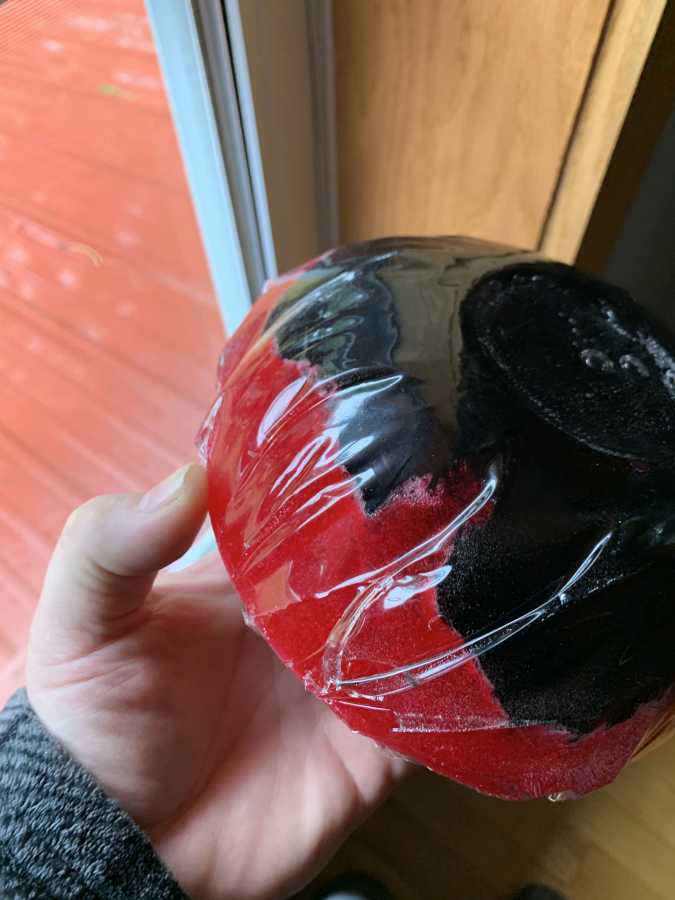 I’m going to have to clean the resin off the chuck ring but that’ll be easy work with a scraper. Another thing I notice is that the resin is not rock hard; maybe it’ll cut better. Now, I am wondering if part of the trick of the youtubers is that they start turning the next day and maybe the resin has not fully hardened. That would make quite a difference.

This is what self-isolating looks like at Badger Forge; it looks like someone was lathing on a muppet: 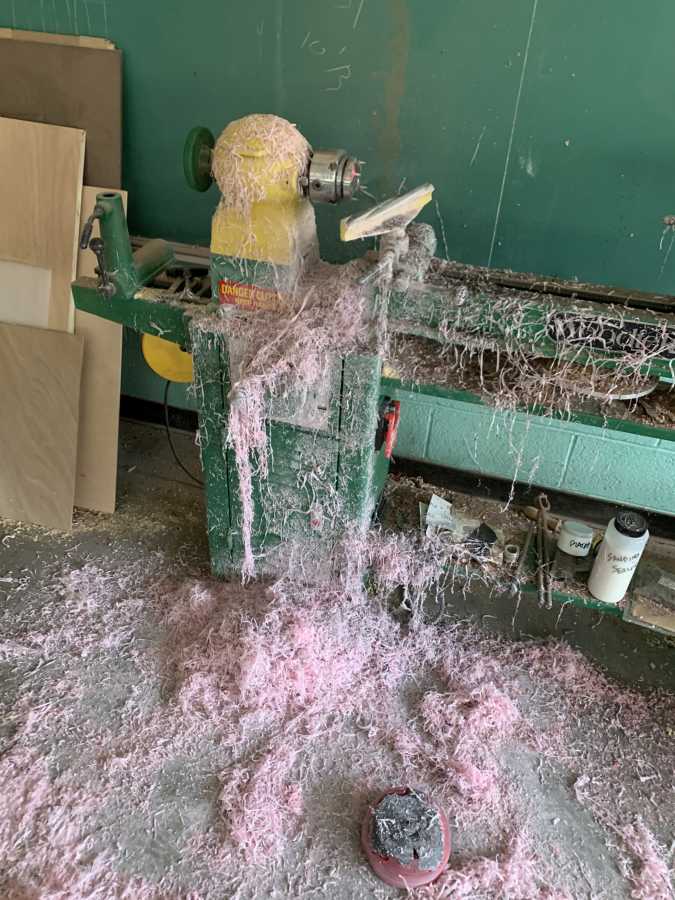 You can see the work piece on the floor, and the screws and ring sticking from the chuck. That photo was taken right after the darned thing hit my hand.

I may see if I can get over to the shop tonight and give it another turn. But I have a bunch of stuff I have to do today and I seem to be sitting in front of the computer, writing, instead.

Yes, I also wear a breath filter. Because that strandy stuff is pure coronavirus. Well, I don’t want to breathe it.

That looks like a hellacious mess but it’s really not bad. I have little hand sweepers, a big shop broom, and a shop vac and it takes less than a minute to round all that stuff up and throw it away. The tough part is the bags of sawdust; the dumpster service does not like those. Traditionally, around here, I’d set up a burn can, but I’m trying to be thoughtful of the environment.

Masked and Anonymous » « Some Rambles on Rousseau