This is going to end badly, mark my words.

In case you aren’t familiar with maritime law, piracy is when you seize someone else’s ship in international waters – unless you’re a government and you’re doing it as part of “sanctions”, i.e.: an economic blockade. In that situation, maritime law is superceeded by Mao’s law, which says “power comes from the barrel of a gun.” 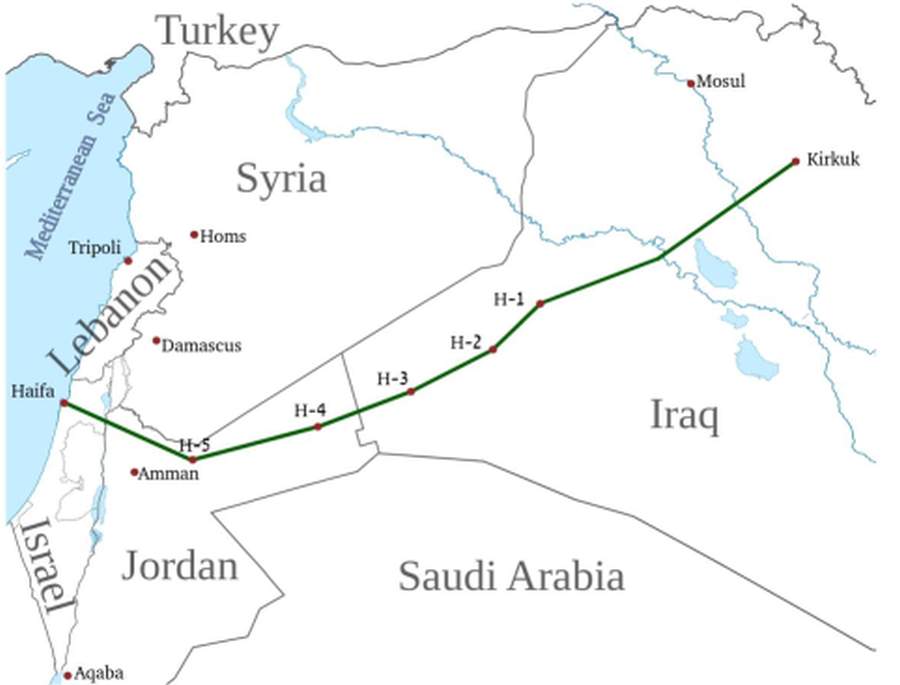 When international sanctions are declared on an oil-rich country, it amounts to an external price control on their goods: they can no longer “legally” ship the oil without going through a middle-man, i.e.: paying a substantial tax. The North Koreans main source of international currency is selling coal or missile technology, which the US has fairly successfully blockaded. In the case of Iran, it’s oil. If you talk to someone like Gwynne Dyer, who tracks geopolitics, it’s more specific than that: the European powers and Saudi Arabia are trying to prevent Iran from establishing a pipeline distribution system to the Mediterranean via Syria, that would allow Iran to sell cheap oil to Europe without any controls on it.

In case you’ve forgotten: all of this is to “free” the Iranian people from an oppressive regime. I.e.: it’s humanitarian. Keep that in mind.

So, July 5, British marines stormed aboard an Iranian oil tanker near Gibraltar. [capt]: 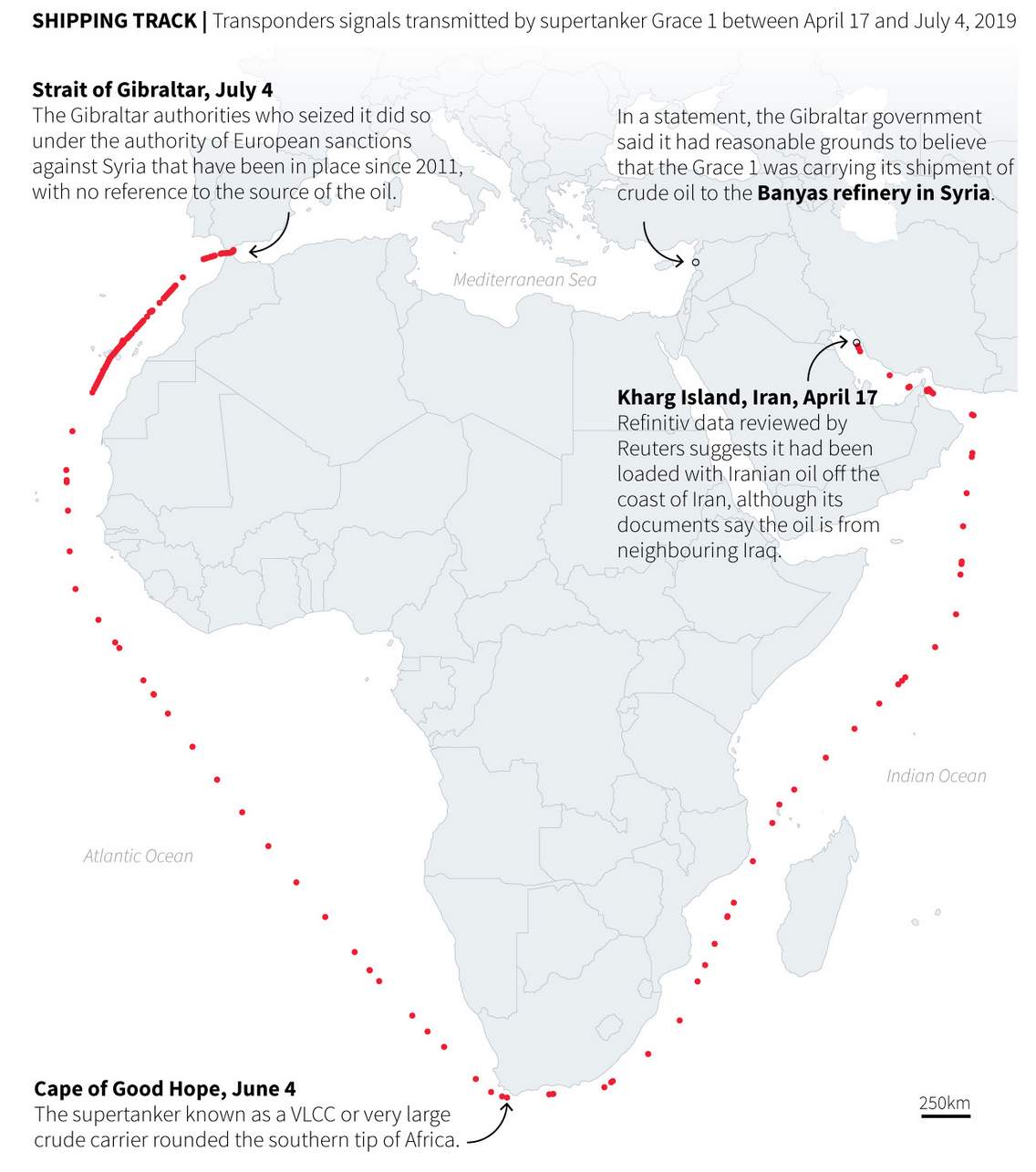 “Take the long way around”

This seems to be particularly cruel: let them go the entire way around the Cape of Good Hope and then stop them at Gibraltar.

The British say that they’ll let the ship go if Iran promises that the oil is not destined for Syria, and Iran points out that the ship was rented and it’s just carrying stuff and, besides, the British are acting like pirates. The whole issue of the ship’s registry (Panama) is irrelevant because it’s Iranian oil in it and that’s what matters; never mind that the whole notion of ships being “registered” to sail under the flag of some nation or other is a sop to nationalism in order to guarantee safe transit on the high seas. [The Grace 1 is Iranian owned, Panama registered and crewed by Indians]

Where Iran screwed up is they didn’t label it a “freedom of navigation exercise” like the US navy does when they sail warships into China’s back yard. Well, as Mao didn’t quite say, “the key word there is ‘warships’.”

That’s all the context for earlier this week, when Iran attempted to (apparently) capture a British oil tanker on July 11. [cnn] The British “happened” to have a military ship standing by, which foiled their plan. Presumably the Iranians now realize that their communications security systems have been totally backdoored by NSA and GCHQ and that the HMS Montrose was standing by for a reason. There was:

A US aircraft was overhead and recorded video of the incident

I bet. The Iranians walked into a trap; they are lucky nobody was killed.

HMS Montrose “got between them and issued a verbal warning to withdraw.

Nothing encourages small boats to withdraw like a verbal warning from a frigate that is pointing 30mm guns at them.

That summarizes the state of play in the early opening moves of the game. The most recent move was Iranian, in which they appear to be going for a trade, by grabbing another Panamanian-registered ship, the Riah, which they claim is smuggling oil. [guard] That’s actually fairly normal – remember how I said, earlier, that “sanctions” and “tariffs” are just externally imposed price controls? It’s a fairly well-known thing that tankers buy oil, sail off, then turn off their transponders and offload the oil to another ship at sea for a handy profit. In fact, Russians do it all the time – smuggling oil to: North Korea. [bi]

The transfers in October and November indicate that smuggling from Russia to North Korea has evolved to loading cargoes at sea since Reuters reported in September that North Korean ships were sailing directly from Russia to their homeland.

“Russian vessels have made ship-to-ship transfers of petrochemicals to North Korean vessels on several occasions this year in breach of sanctions,” the first security source, who spoke on condition of anonymity, told Reuters. 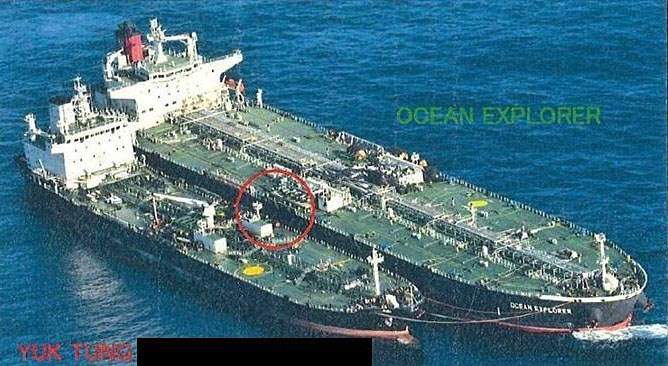 The Yuk Tang (N Korea) offloading from the Ocean Explorer

There are websites operated by nerdy people who track oil tankers and their transponders. [tankertrackers] This stuff is an open secret, i.e.: it gets published about in the newspapers. [jakarta] Iranian and other oil gets smuggled all over the planet:

A tanker carrying Iranian fuel oil in violation of U.S. sanctions has unloaded the cargo into storage tanks near the Chinese city of Zhoushan, according to ship tracking data on Refinitiv Eikon.

The discharging of the nearly 130,000 tonnes of Iranian fuel oil onboard the tanker, the Marshal Z, confirmed by a representative of the oil storage terminal, marks the end of an odyssey for the cargo that began four months ago.

See what I mean about sanctions amounting to externally-imposed price controls? I don’t see why the US and Britain don’t just send a payment demand: “Hey, send us our cut of the transaction” issued by a sleepy-eyed guy in a raincoat. Basically, that’s what’s going on. And all of this is for the “Freedoms” of the Iranian people.

The ship transponder tech sounds interesting. Apparently some of these smugglers are able to squawk a fake registration. So the Yuk Tang disappears and a few days later the Summer Sun shows up in the same area. This whole thing sounds remarkably like 18th-century smugglers, pirates, and slavers – except that now they have anti-ship missiles that can sink eachother from over the horizon.

What can I say? That’s brilliant! It’s nice of NPR to make sure we understand that the Iranians didn’t seize one of their own ships. After all, that’s certainly a possibility.