Yesterday I discovered that I have a sort of a rareish medical condition. From the sound of it, its a medical condition that’s easy enough to have; and I ought to be able to not have it happen again if I am thoughtful.

I woke up in the morning and had to go to the bathroom, so I slid out of bed, grabbed a swig of orange juice from the glass on the night table, and walked to the other room, sat down and started doing my thing. How shall I say this? I really had to do my thing pretty badly and it started going quite well indeed. In other words, I was not constipated or anything like that – it was, in fact, a great relief. It was such a relief that it felt quite good and, (at least I am pretty sure this is what happened) I took a breath and kind of pushed a bit. Then, I woke up on the floor, in a pool of blood. 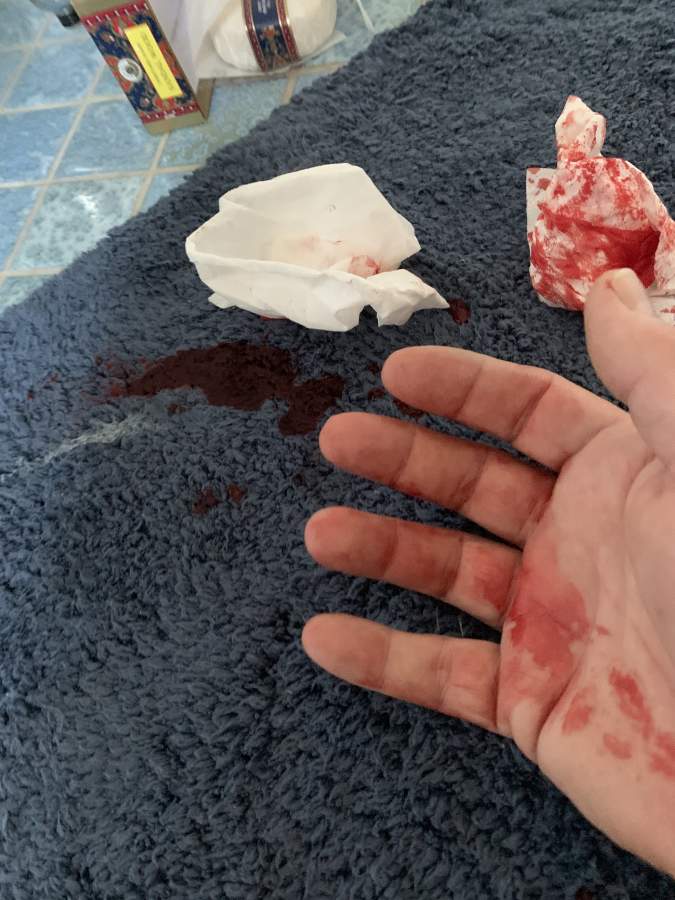 My glasses were broken and my right eye was fogged and I couldn’t see out of it (turns out it was full of carpet fuzz) My first thought was that I’d had a stroke so I thought I’d see if I could control my phone (which is why I took a picture) – so far, so good. After some blinking my eye began to work again and I was able to stick some kleenex on the bleeds to reduce them while I did some damage assessment. I know head wounds bleed a lot, and the fact that I wasn’t showering blood all over the place meant it was pretty minor. But it wasn’t so minor as all that. I didn’t seem to be having a heart attack because I hear those are very distressing and painful and I’d probably not have regained consciousness at all.

So I googled, “why did I faint when I pooped?”

Surprisingly, that query dropped me to several explanations of what had happened. It’s called “vasovagal syncope” [mayo] and, the short form is: don’t take a deep breath and don’t push. The pressure on your diaphragm combines with your full lungs and can compress your chest enough that it spikes then drops your blood pressure and -pop- you’re out like a light. When I was a kid in high school some of the other kids would do a similar thing, where you breathe fast a few times then hold your breath and another kid presses on your sternum and -pop- you’re out. I never did it because it didn’t look like a whole lot of fun. In fact, this 2017 article [s] points out that it can injure you rather badly. My past experience with passing out and falling down led to a broken jaw wired shut for 2 months, so I can already attest to that.

This has actually happened to me once before but I chalked it up to too much red wine the night before, and dehydration something something. 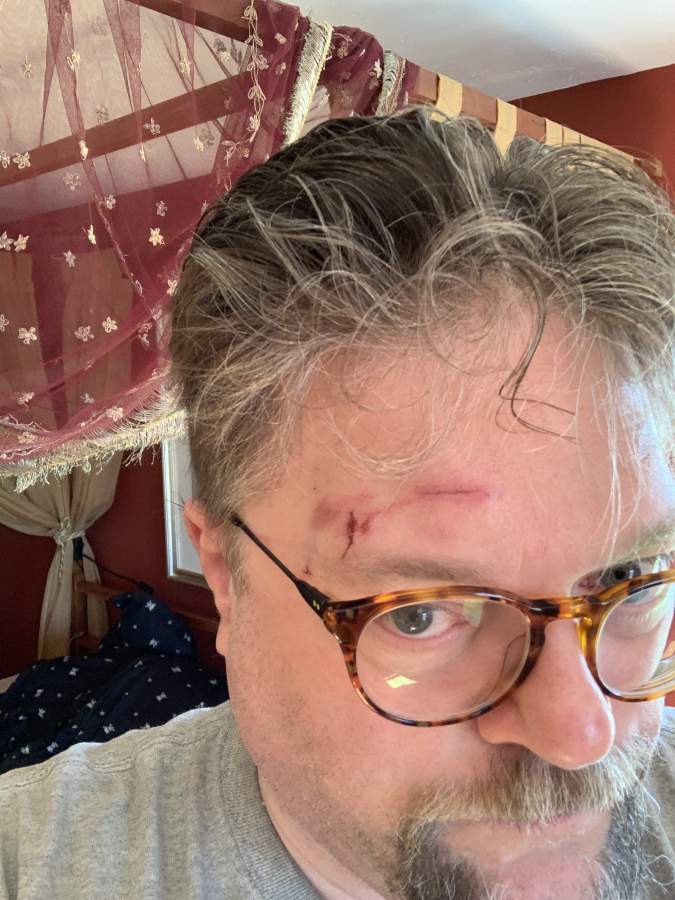 That’s not a scar, that’s an experience point

I took the rest of the evening easy and drank a lot and rested, then when everything stopped leaking, I took a shower and cleaned up the obvious mess so I could do a damage assessment. The longish vertical cut is where the broken arm of my glasses (on the frame) went into my eyebrow and the contusion is probably the frame. Lucky me, I didn’t hit anything harder or at the wrong angle.

So now we all know “don’t push!” is good advice.