Maybe the Tennessee police have become homeopaths. If homeopathy worked, this would be a problem. [nbc]

It appears that the police have hit upon a not particularly clever way to get meth users to not flush their stash down the toilet when the cops knock on the door: 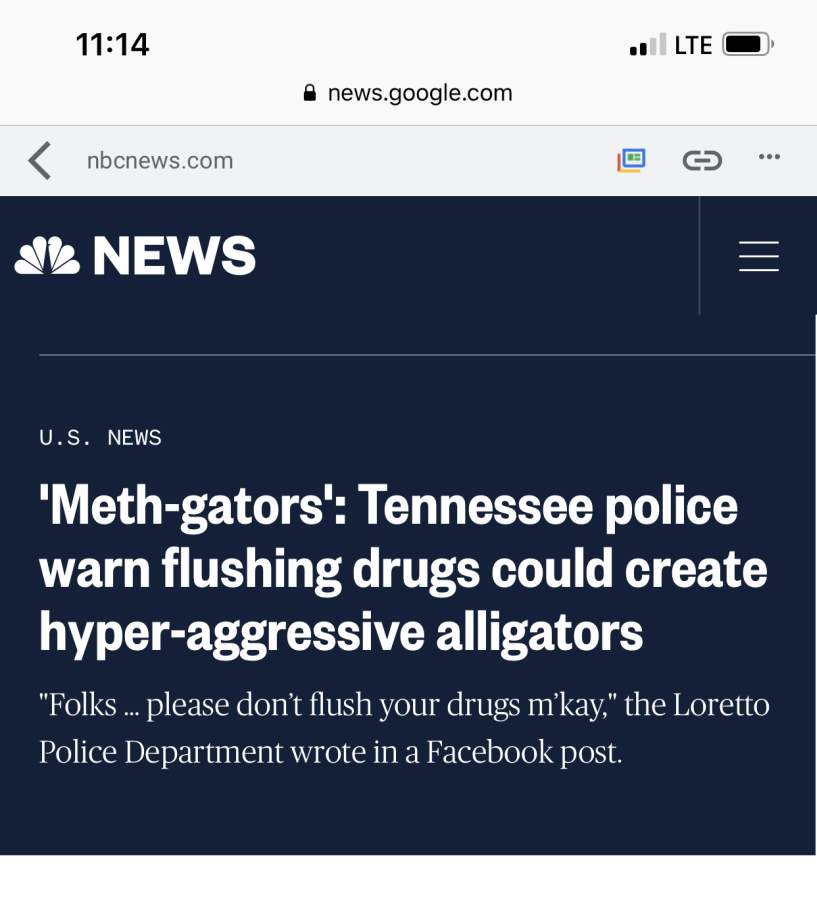 I know you’re already thinking about the dilution that’s going on, and have realized that this is completely bogus. I suppose if you had an alligator living in your toilet bowl, it might be a realistic problem, but otherwise you’d have to flush some truly massive amounts of meth – which would mean that, first, you’d have to have truly massive amounts of meth. Amounts of meth that would clog your toilet, which would be a giveaway when the cops finally hammer the door in.

My transactions with alligators have been limited by my desire to avoid alligator/Marcus interactions. They seem to be pretty much like any critter: they want to be left alone and enjoy a good nap and will chomp the hell out of you if you annoy them or look like breakfast. One thing I do know is that reptiles can generally move much faster than you expect, when they decide to. Since I don’t know what a safe distance from an alligator is, I’m opting for about a thousand miles.

Alligators are pretty tough and, like any critter, they’ll try to thrive and survive if they find themselves someplace odd. Like, in a sewage processing center in Clearfield County, PA (this processing center is about 12 miles from my house, and 1 mile from the grocery store where I usually supply): [weare]

Residents in Clearfield County have been seeing an unusual site the past few days.

An alligator was spotted on Friday swimming around at the sewage authority in Mineral Springs.

The Fish and Boat Commission from the North Central Region tried to capture the reptile on Sunday, but was unsuccessful.

We’re told the gator was illegally released into the water.

The sewage authority has hired a licensed pest control agent to help the authority.

If anyone has any information on who may have released this alligator, they are to call the North Central Region office of the PA Fish and Boat Commission.

This violated my “ideal Marcus/Gator distance” by a large margin. Fortunately, the ‘gator appears to have not been meth-addicted, because the pest control agent was able to survive – but so far, the creature is at large. It’s about 3 feet long. Apparently, the pest control agent tried to lure it using a roadkill skunk. I.e.: they are feeding it so it gets bigger. Since this is Pennsylvania, I expect it will end with someone shooting it.

UPDATE: The alligator has been deported back to Florida [wjact]

Loustalot and Sunderland tried baiting the gator and snagging it with a fishing hook. After several unsuccessful attempts, they tried using a boat.

“My buddy Dave (Loustalot) paddled and maneuvered me into position and I saw the water turn,” Sunderland said. “I dove my neck down in there and slid sideways and we had him in the net.”

“I got the gator pinned in the corner and five minutes later the gator was in the boat and taped up,” Loustalot said.

The alligator was transported by officials with One Dog at a Time to Forgotten Friend Reptile Sanctuary in Lancaster.

In Pennsylvania, we treat alligators better than non-white humans.

In other “alligators where people think they don’t belong” news, there’s an alligator outbreak in Chicago that has also been contained: The Humboldt Park Gator [swi]

CHICAGO (AP) – Police say an expert from Florida has captured an elusive alligator in a Chicago public lagoon.

The reptile, nicknamed “Chance the Snapper,” was first spotted last week and photos soon started showing up online. Investigators don’t know why the animal, which is at least 4 feet (1.2 meters) long, was on the loose in Chicago.