If you’re not overreaching, occasionally, you’re probably not fully exploring your options.

Something gave me the idea of challenging Mike Poor to a “straight razor bake-off” so I promptly did. I have no idea what Mike came up with but it’s going to be pretty good. To make matters more exciting, Mike posted about the challenge and several other bladesmiths asked if they could play. I’m not sure what the final field looks like (it’s smaller than the Democratic candidacy for 2020) but there are several professional bladesmiths involved, and Fans of the Forge has agreed to serve as judges.

My first attempt failed. Or, rather, I failed it. The metal came out great and as I was grinding it, I dropped it on the floor. It landed on its spine so I thought, “whew” until I picked it up and saw that a great big crack had formed across the edge. So much for that. I use it as a box cutter now. 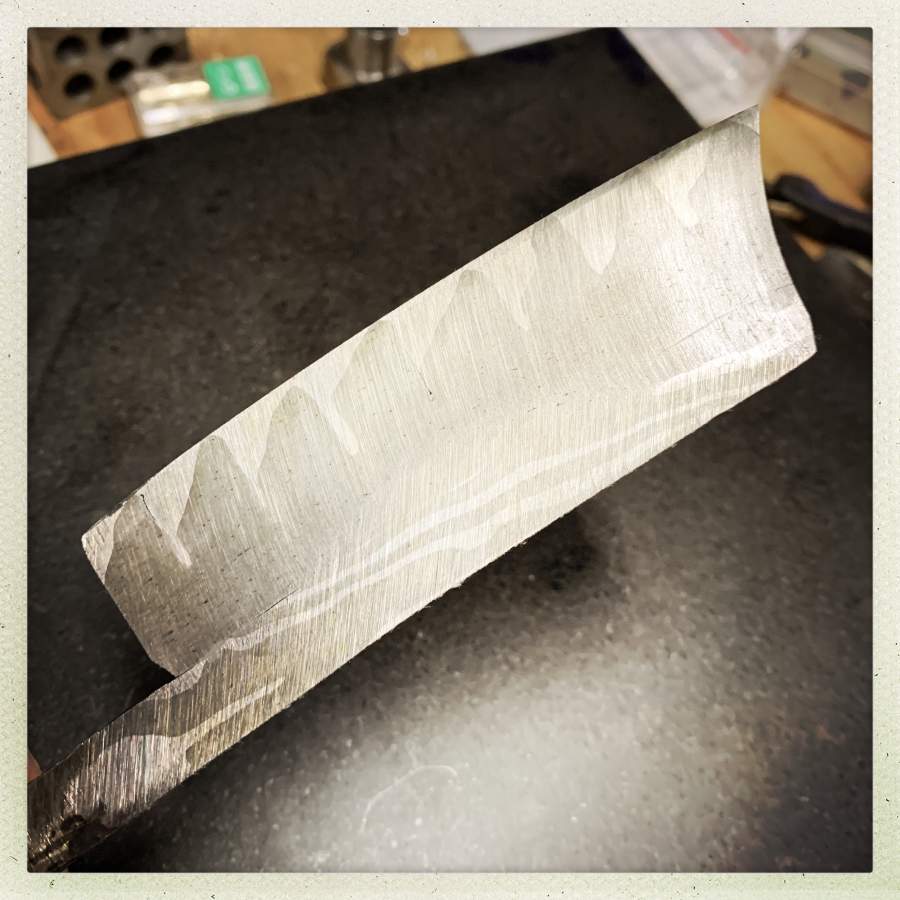 To get the sawtooth pattern, I took two pieces of 1095 in a vise and hacksawed away madly, then laid them up on either side of a chunk of 15N20 and welded it down. You can see there are still weld-lines in there; more grinding took them out. It was perhaps a bit flashy but I liked the idea.

There was one problem with that concept, though: as I hollow-ground to the edge, the teeth started to get thinner and thinner and I nearly lost them completely. The sawtooth design is probably OK for a thicker blade but not a razor or a cooking knife. It’d be fun to make a sword blade like that.

Attempt #2 I decided to go for “classy” or something, and made a bar of 1″ x 1″ damascus from 1095 wire rope. I let Mister Happy Dancing Bandsaw cut that up into 1″ cubes, which I arranged into face up, face horizontal, face vertical pattern, then welded back into a bar. My thinking was that there’d be these cool patterns on the sides from the vertical wires in the rope. As it happened, I got some texture but not really much. Oh, well. I was running out of time for another attempt so this was going to be the horse I had to ride. 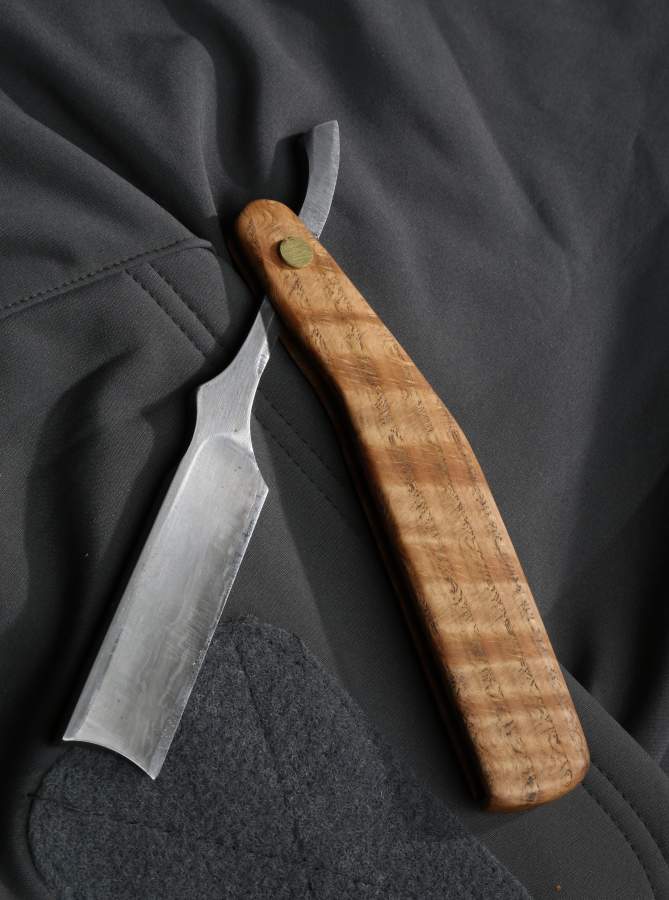 The wood of the cover is red oak; I have this piece of highly figured oak which has grain running in all directions. Initially, I assumed that the cover would get thin and the grainy oak would be strong and stiff, but as I shaped the cover, it seemed to want to stay chunky. I do this sort of thing entirely by feel with very little planning.

So, that’s my arrow fired. I sent pictures of to Fans of the Forge and I’ll wait and see what the other entrants wind up looking like.

We didn’t want to have any kind of prizes or voting, simply a panel of experts saying “this is the best and here is why.” But Mike suggested that the winner is to be “paid homage” by the runners-up. So I decided, naturally, that appropriate homage would be a Tshirt. I’ve got a small number of custom “Badger Forge” tshirts in production and I’ll post a picture of one when I get them.

All in all this was a fun and frustrating effort, but it dragged me kicking and screaming into a new direction and made me think about hollow grinds a bit differently. So, it’s win/win all around.

Because the grind-lines on a razor are its most visually recognizable feature, most razor makers brace the blade against the wheel so that there is an absolute minimum of angle shift. I guess I was being arrogant (pride comes before a fall and all that) and thought I could freehand it, which I did. But it shows. Also, razor blades have to be hard, hard, hard, which means that getting the scratches out sucks, sucks, sucks. That’s why a lot of razors have grind-marks in the concave surface. I made a wooden “plug” that matched the grind of the blade and attached it to a profile sander and let power tools do what they are supposed to do. There are still scratches, naturally.

I’m sure as hell not going to try to shave with this thing. It’s pretty darned sharp but I’m a fan of safety blades because that’s how my toxic masculinity rolls. This thing may need a home; do any of you use a straight razor? Note the careful wording: you could probably use this razor tactically, it’s pretty big. But for it to be “tactical” I’d have had to dye the cover black and parkerize the blade a deeper shade.

Technical notes on product photography: since I was sending photos in for judging I didn’t even clean up minute pieces of dust or adjust contrast or deepen the shadows. This is right off the camera, resized.

Control-Z » « Off to Cape Canaveral