We decided to quench swords in order of length, shortest first.

In that case, nambokucho-style goes last. Prasant’s blade came out with a gorgeous curve, light and strong, configured like a tachi. Then Neil’s blade came out perfect. We were on a roll. Mike’s blade came out fine (but… I’ll get to that) and then I appear to have let mine soak up too much heat because it completely hardened. For a cooking knife that would be fine – no hamon, so what? – but for a sword, it means it’s one impact from snapping in half. It is completely unacceptable.

What do you do, in that case? You re-normalize the metal to relax it. Heat it evenly and slowly to around 1550F then keep it there for a while, straighten it back up, and let it cool slowly. This is also “annealing” the steel; it becomes soft and malleable afterward. Then, you sand off the oxidized metal and re-clay the blade and try again. The problem is that normalization takes a couple hours, as does re-claying and letting the clay dry. Around quitting time today, my sword was still standing in the corner with the clay drying. 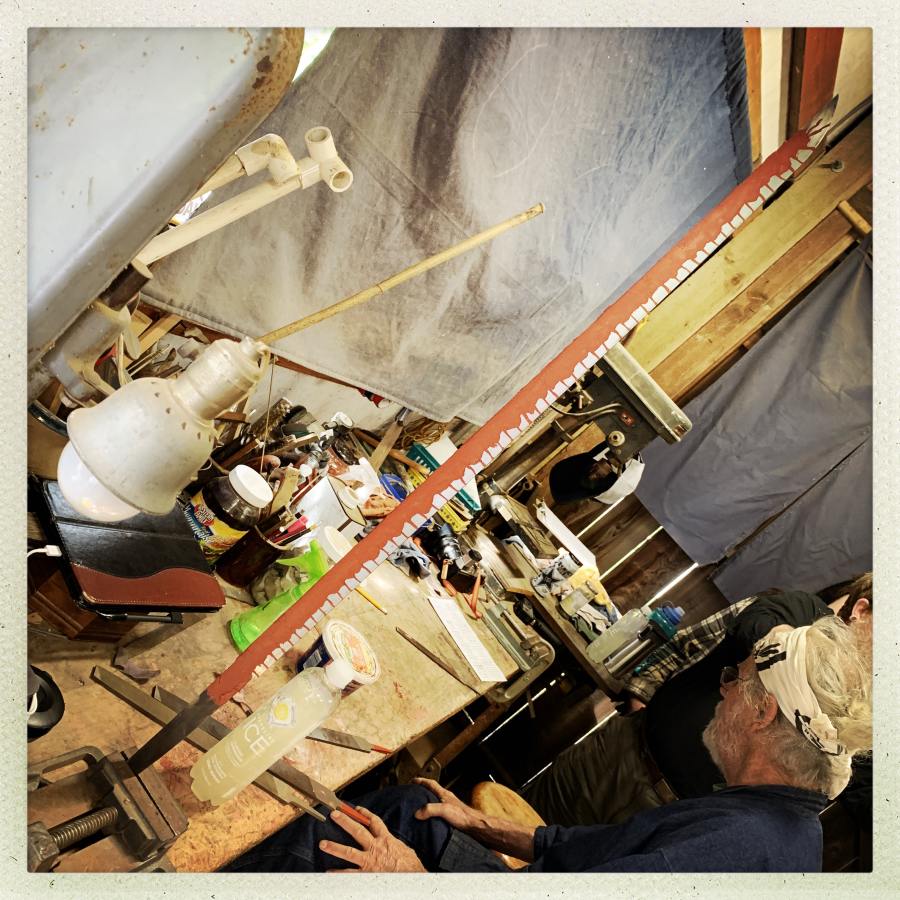 That’s what the blade looks like before it has taken on any curvature. That’s as it was forged and rough-ground and filed. It’s basically a straight stick. The clay is on the back and there are small tendrils (“ashi”) toward the edge, to help make small areas that will not be completely martensite. Once it’s quenched and the martensite phase grain develops, the martensite grains are larger than the pearlite grains in the back (under the clay) the edge pushes itself away from itself and the entire blade takes on a graceful curve. 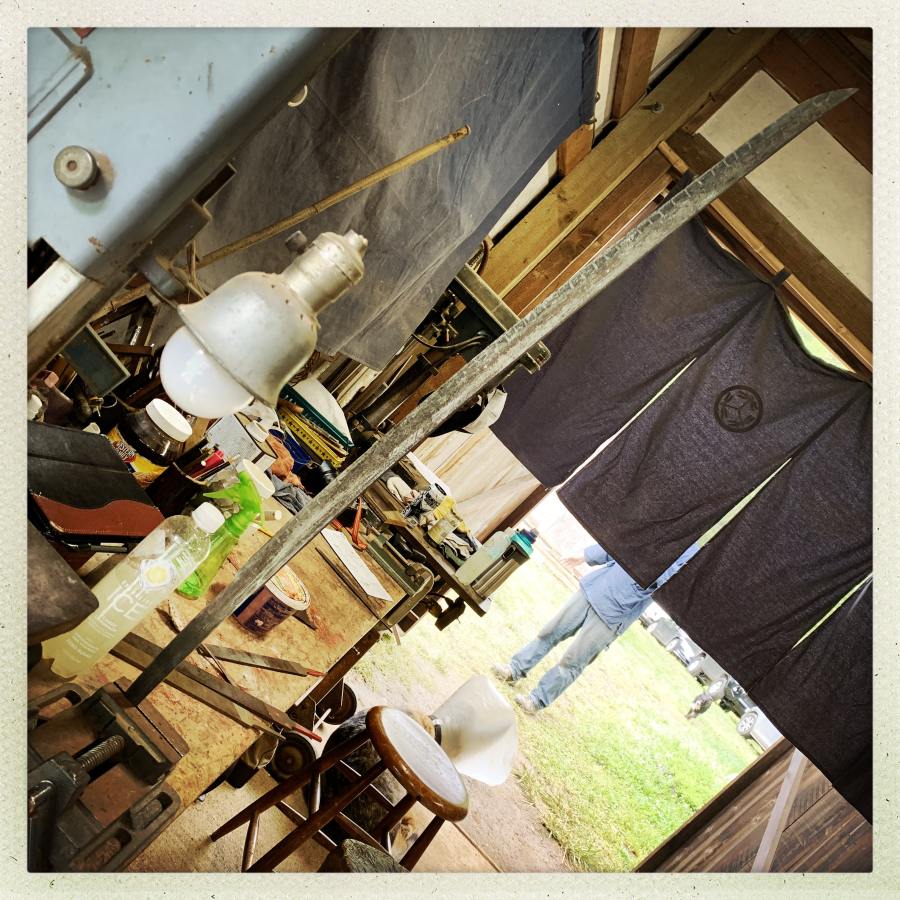 Supposedly graceful, anyhow. That’s my blade – it’s completely hardened and needs to cool off before I normalize it and try again.

The curvature can be controlled by moving the temper-line (“hamon”) closer to the edge or moving it back, which makes the martensitic area larger but increases the chance that the blade might crack because the softer, stronger back is thinner.

All that brings me to Mike’s blade, which quenched and looked great, with a big swooping tachi-like curve. Everyone was happy at first until some closer examination set in. There were spots where the back of the blade was hard, and it turned out that the temper line ran all the way up from the edge to the back and back down. Each of those spots is a potential snapping-off waiting to happen. Worse, the blade took a nasty bend right at one of those points. That meant that bending it back was not an option because, with a martensite band running from the edge to the back, trying to bend the blade would almost certainly snap it. After a lot of analysis, the decision was collectively reached to re-normalize Mike’s blade and try again.

Tomorrow morning we’ll have a quick quenching session and, whether it works or not, we’ll go our separate ways.

One of the things I noticed in this process was that the instructors (Michael and Gabriel Bell, and John) agree about everything. If I take my blade to Gabriel and say “what should I do next?” he might point at a spot and say, “bring that up a bit on the sander.” If I got to Michael Bell, he will say exactly the same thing. So would John. This is exactly the opposite from economists, dieticians, or feng shui practitioners, who have no consistent understanding of what they are looking at. I ponder this and conclude that this is what knowledge looks like. It’s not simply practice and practicality, it’s a shared understanding at a deep level of expertise. 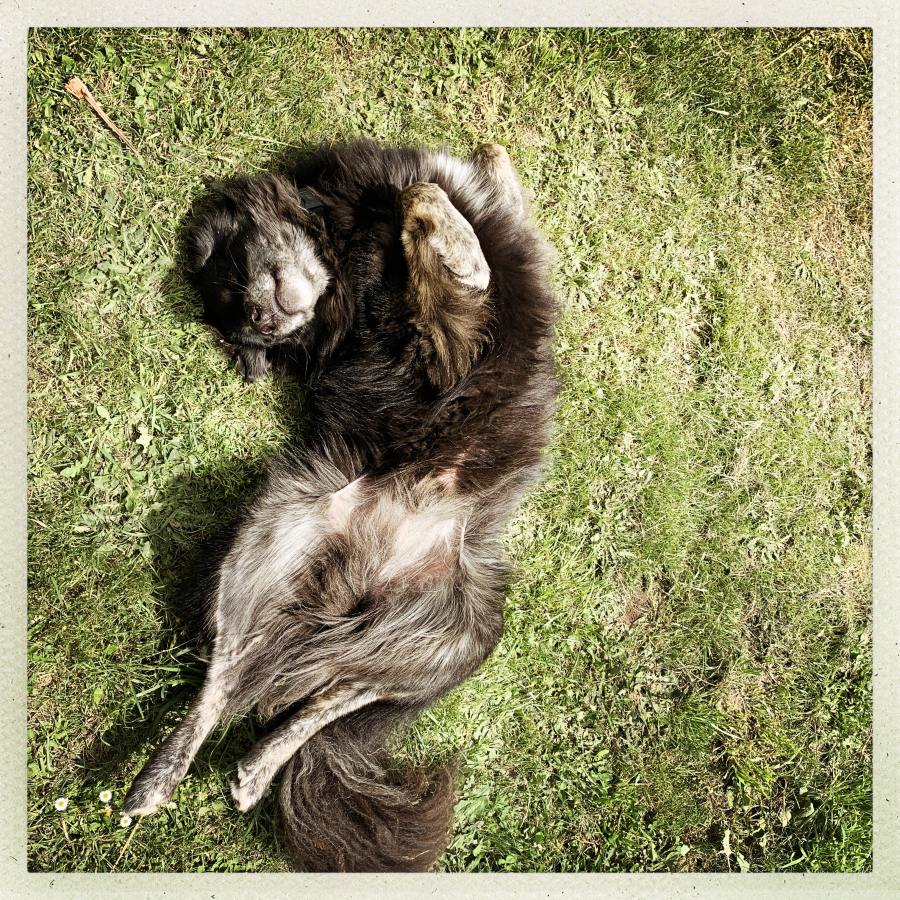