I don’t feel that my hammer control is very good, but once the shape of the blade gets refined, good control is more and more important.

The entire day wednesday is heating the blade in spots, then tweaking the shape. Each time you hit it over ${here} it causes a change over ${there} and then you have to adjust that, in turn. For example, you might want to make the blade a bit wider, by hitting on the metal close to the center of the body, with the hammer at an angle – that drives the metal from the body out toward the edge, but it also thins it and lengthens the blade a tiny bit. In fact, there is no way to hammer the blade back to being shorter, so everything amounts to slightly lengthening it, over and over. There are tapers that need to be established everywhere in the blade – tip to tang has to be tapered as well as the overall thickness across the back, and the width from the back to the edge. The more symmetrical it is at this stage, the less grinding will be necessary. I like to grind and I’m very comfortable with it (more so than with a hammer) but you can’t just start grinding until all the metal is in the right place. 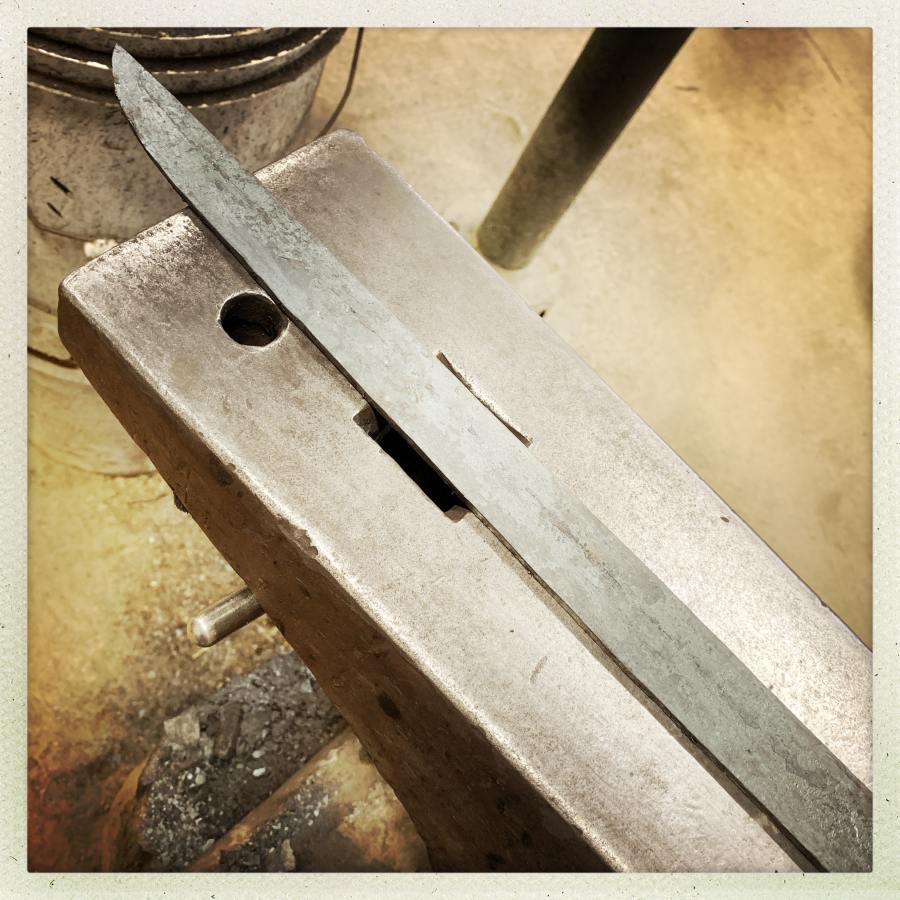 The instructors are magical. At one point I was having trouble getting a certain piece symmetrical and asked Michael Bell for help. He made a few gentle taps ${here} and over ${there} then straightened the back on the anvil and it looked perfect. Then, I went back to trying to make it more perfect. This part of the process is humbling because you realize quickly that you’re chasing a standard of perfection you’ll barely ever be able to fully achieve – but you have to or you’re wasting your time. Then, when you think it looks as right as it can, Gabriel Bell will point out “it’s too thick ${there}” and yo can see it’s totally too thick right where you thought it was fine a few seconds ago.

After that, around quitting time, I normalized the blade. That’s when you release any stored up forces in the metal by bringing it up evenly to around quench temperature, and let it cool slowly. Since the blade is longer than the forge that means slowly moving it in/out until you get it evenly heated, then putting it edge up to rest on the hot upper surface of the forge (which is about 600F) for an hour or so. Some of the guys snapped pictures of me normalizing my blade, but I don’t have them yet, so here’s one of the other students working on normalizing his: 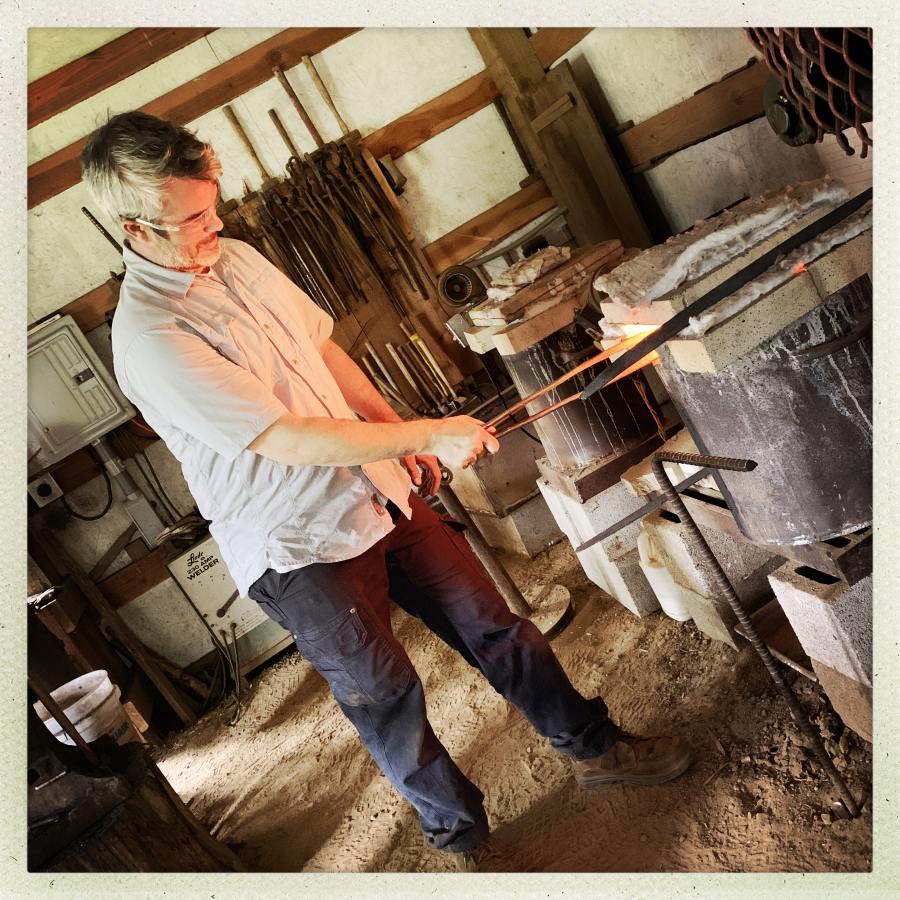 The shop is full of endless fascinating things! This is a big chunk of bloomery iron that someone sent Michael Bell. They’re refining their own iron using the Japanese method, and are hoping to sell tamahagane to swordsmiths that want the steel without having to do that part of the process. It’s full of inclusions and voids but it’s iron. To turn that into workable steel for a sword, it would need to be worked with a lot of carbon, to absorb it, then folded repeatedly to distribute it evenly through the piece. 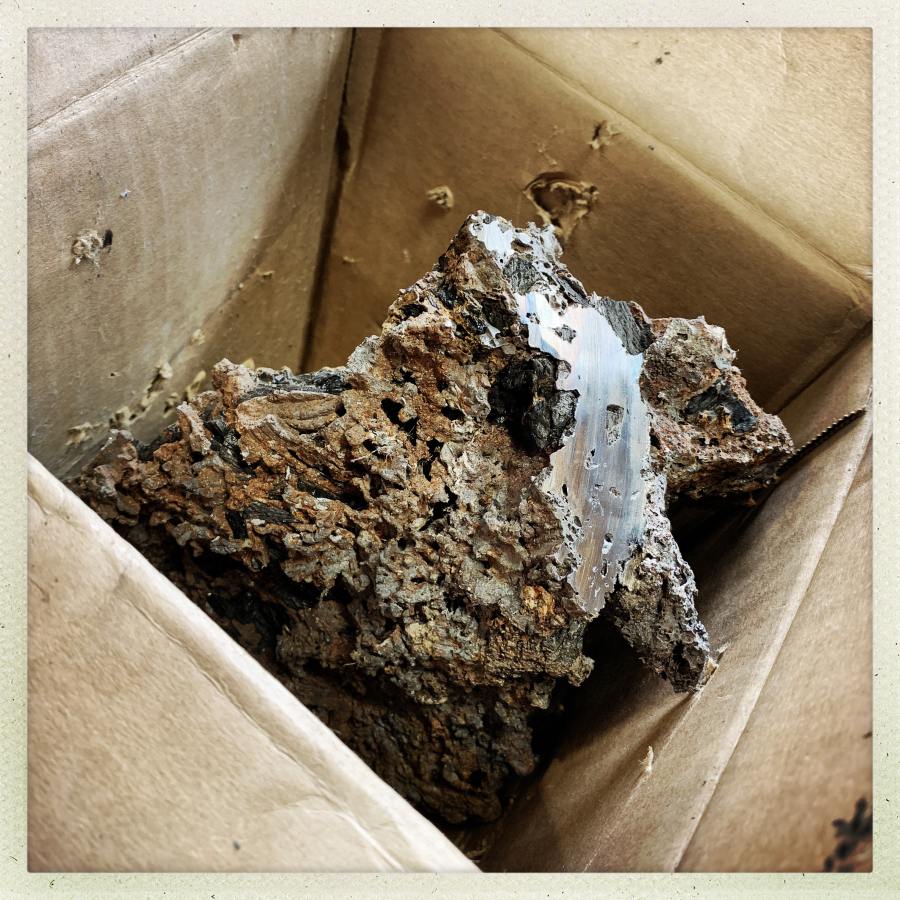 Today we are going to grind the scale off and take the blades to the sander/grinders to start making some of the surfaces ready for quenching.

One characteristic of nambokucho-style blades is that they usually have a full-length bo-hi, or lightening groove. The groove increases the surface area of the blade and lightens and stiffens it. But forming it is a process that involves extreme patience. Once the blade is quenched the back edge will still be mostly unhardened, and you use a scraper to grind the groove into the steel. 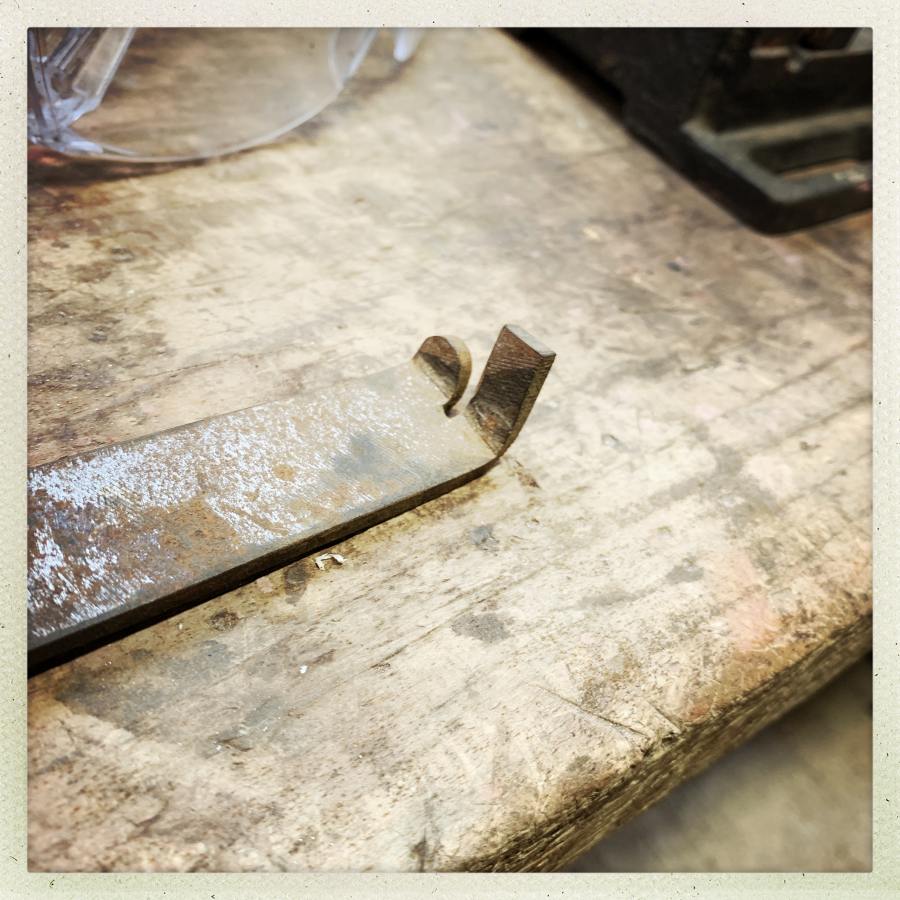 That’s the tool: a file that has been cut and bent so that one piece will run along the back of the blade, and the rounded surface will scrape away the steel. This is described as an agonizing process that takes about a week to complete, and it’s why nobody likes to make nambokucho-style blades any more. “Oh, boy!”