This weekend I’ve got a guest coming to the forge; we’re going to try to make him a seax. It’s going to be a lot of fun watching someone else work while I take pictures and drone advice at him.

Meanwhile, I have been pondering if I want to change the way I usually mount a handle. I’ve been doing it the same way for 20+ years, now. Maybe it’s time to experiment a bit. I spent a few hours messing around trying to sculpt some things in clay, so I could see what they’d look like. It turns out I am not a sculptor. Finally, I decided I’d just make a couple pieces out of metal and see how they looked, then figure out how to duplicate them if I liked them.

I’ve also been pondering things like guards and pommels, which I normally don’t do – but a seax has a guard, so that’s something to think about. I had the idea we could just flatten down a piece of gooby and cut a guard with a coping saw. Ha ha ha, I crack myself up: the piece of gooby I picked was wrought iron/1095 high layer damascus and the coping saw blade polished a spot, got warm, and died. Have I mentioned that wrought iron is really tough stuff? And it’s a doddle compared to something like S7 tool steel. 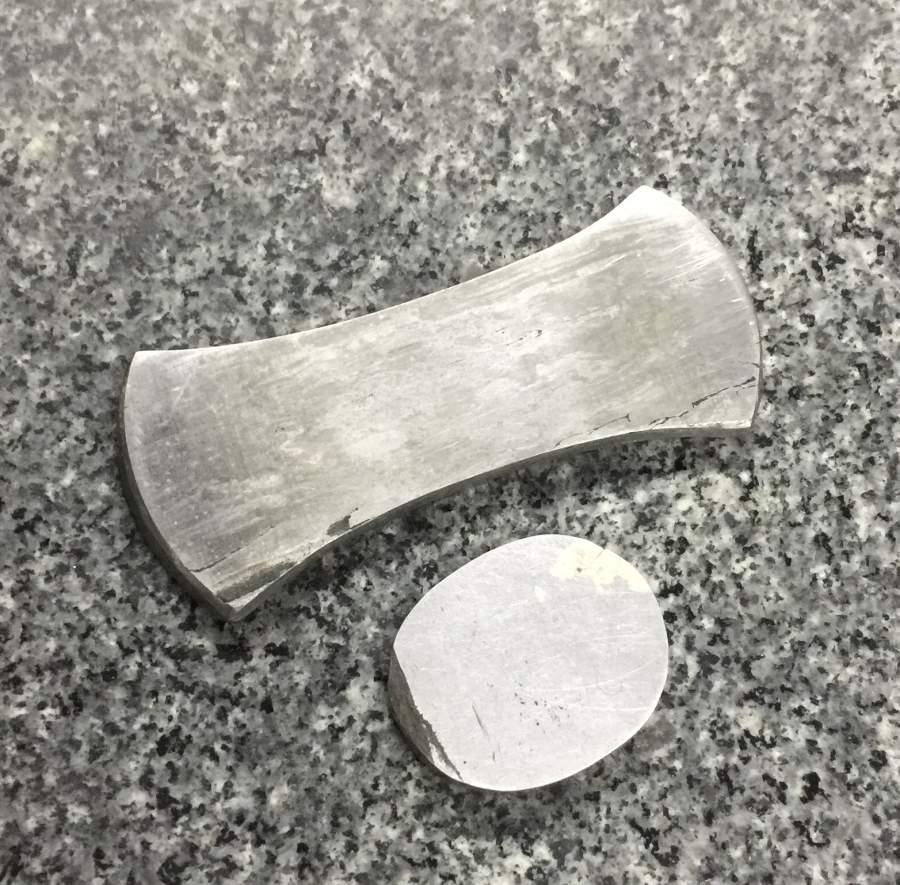 Eventually I resorted to the tried and true method of chopping big hunks away from it with a cutoff wheel then roughing it with an angle grinder, and then detail-sanding it on the belt sander. A little piece like this is a pain to work with because it’s got no thermal mass and heats up pretty quickly. Fortunately, my dunk-bucket was near freezing temperature so it cooled off pretty fast. After an hour or so I had a pommel cap of sorts and a guard of sorts.

One of the other ideas I’ve been thinking over is casting bronze. So I’ve decided to make an archive of all the guards and pommel caps that I design. I’ve been making little silicone molds from the pieces, that way I can cast beeswax in them and do a greensand open mold casting (or get some investment and make a really nice mold). I am not sure if this is a good idea but it may save me hours someday.

Then I started noodling with the idea of forming a copper band that sort of overlapped like a shaker steam-formed wooden box. Maybe I could put a pin in it if I get fancy. So I asked myself “what would Torbjorn Ahman do?” and decided to make a mandrel. I took a chunk of S7 tool steel (heinously tough stuff) from my metal collection and spent about 2 hours grinding it and shaping it into an approximation of the handle where the cap would fit. 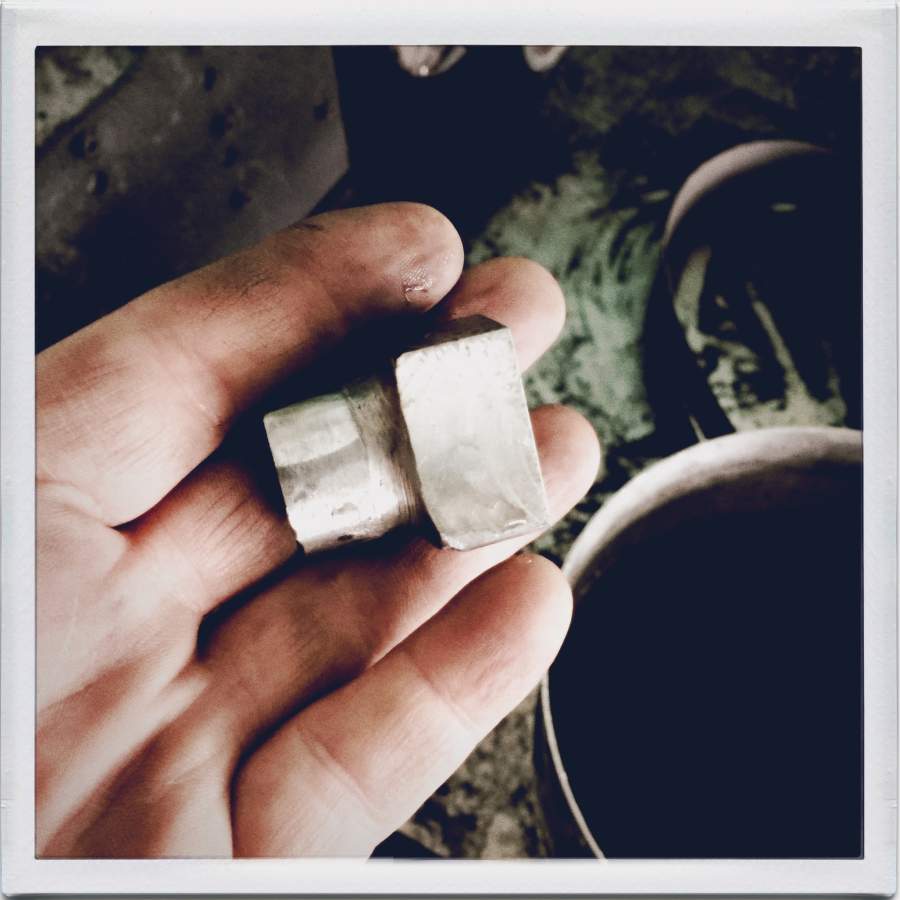 I left it nice and square so it could go in a vise. Admittedly, this is the sort of thing that a milling machine is for, but I don’t have the skill to do a shape like that, freehand. It’s not round, so using the lathe to clean it up isn’t an option, either. Besides, I’ve never dared attempt to lathe metal. 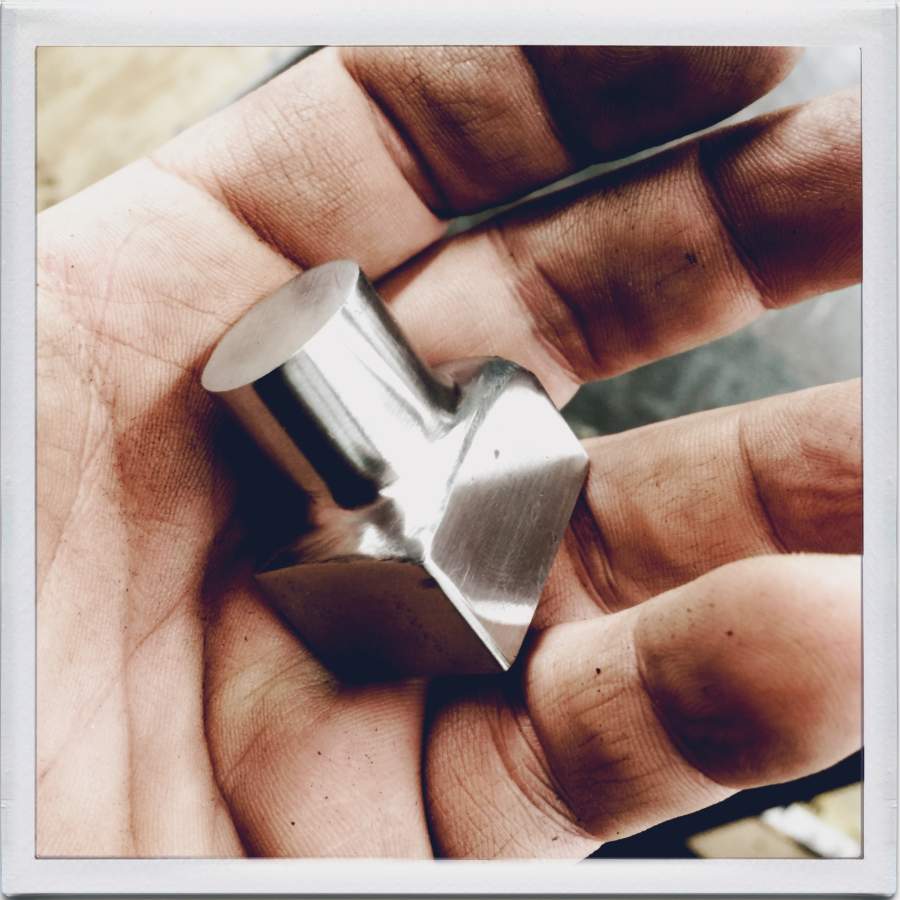 A nice thing about working something like S7 is that it’s very hard to screw up. Because, to “screw up” you have to remove a lot of metal, and that’s not easy – it’s all slow going, which makes it thoughtful and relaxing work. I popped the forge on and heated the mandrel and quenched it, then heated it back to golden color to temper it. It’s basically so tough, now, that about all I can do is polish it. So, I did that.

There’s a problem with this approach, which is that I’m standardizing the size and shape of my handles, if I use the mandrel for shaping end caps. Perhaps I will make another or two someday. It is hard work but it’s meditative and relaxing to make sparks fly. 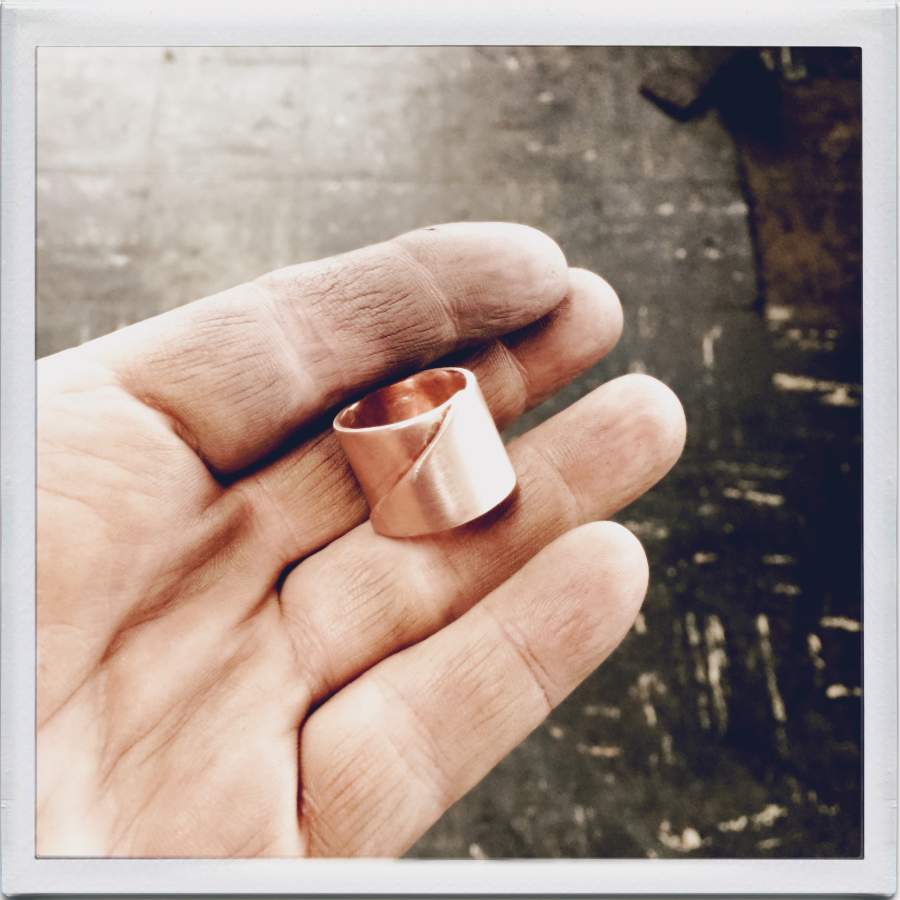 Then, I took a strip of paper and measured the length of stock I’d need, cut a piece of copper, clamped the mandrel in my vise, and held one end of the copper in some flat pliers while I tapped it into shape with one of my little hammers. As I got the metal most of the way around, I ground down the point where it would overlap (a bit) so it wouldn’t make a bulge. After that, I just hammer-stretched it and tightened it by stroking the hammer-strikes so they pushed the metal over and around. Using a fine file, I de-dented it with little gentle strokes, then switched to sandpaper: 600 grit, 1000 grit, 3000 grit, and then steel wool. It looks lovely, I think, but it may be a bit too chunky for a sushi chef’s knife. There’s an easy way to find out, though!

Since I might want to cast these in bronze or sterling I made a silicone mold of it, too. Before I put it in the mold, though, I modified how the mold will come out, by altering the object with clay. Sneaky, huh? I filled in the lap-line by packing clay into it, so when it’s cast it’ll look like it was brazed. Then, I made a cap-piece by putting the wrapped piece down and tamping clay into the base of it with a square-ended rod. It that works, for castings, it is going to be so much easier than cutting and fitting a copper base, because the copper base should probably fit on the inside of the piece, not the bottom (so the braze-lines are less visible) – that will mean a bit of filing and fitting.

A little while ago I decided to go down to the kitchen and make some tea, and I discovered that I hadn’t done a good job setting up the mold-box. This is what I call an “unauthorized silicone excursion.” It’ll peel right up in the morning but I’m a bit sheepish. I’ll just top off the mold box and the mold will be fine. I have another silicone mold compound from smooth-on, which is supposed to hold strength and shape up to 500F, which means it can handle light casting like tin or sterling. If I can directly cast those caps, that’d be great. There’s an alloy called “brittania metal” (mostly tin, I think) that is also low temperature and looks like sterling. Best of all, it’s $20/lb. I really want to try bronze or shakudo.

I have a trip to Stuttgart next week (speaking at IT-Defense conference) the 2-9 and I’ll have my shop-guest until sunday, so I may not reply to comments or post on my usual schedule. After that I have another trip to Luxembourg and then California.