Atomic lighter. Do we need to discuss this further? 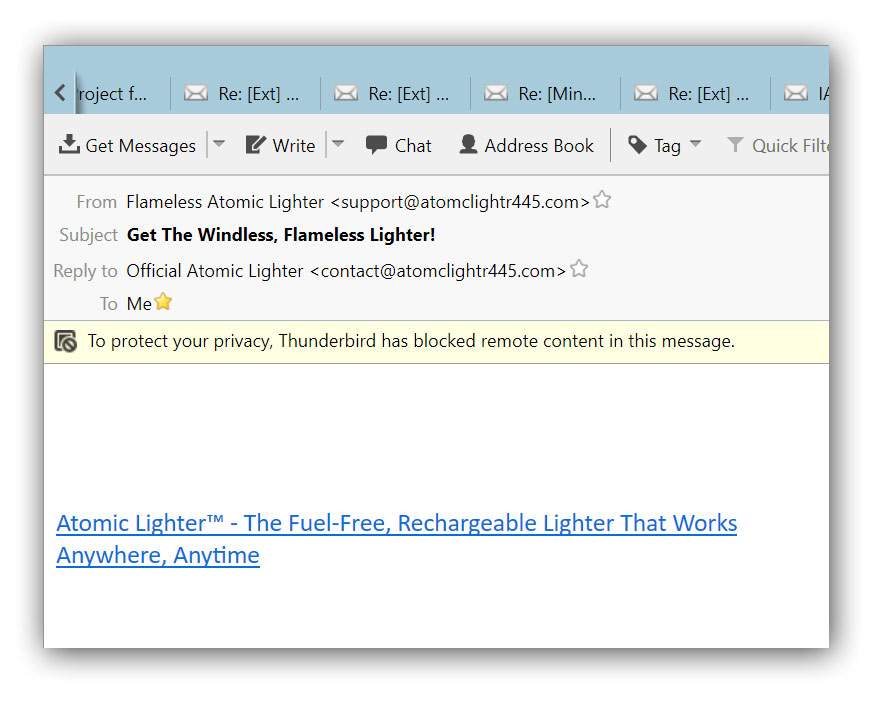 It occurs to me that a “flameless lighter” might be one that simply does nothing. Or, perhaps it is a thin iron needle: it oxidizes a bit slowly, for a lighter, but it’s flameless and it produces a little bit of heat and doesn’t need refueling for a long time.

By the way: isn’t it nice of thunderbird to block remote content in these messages? A few times I’ve looked at the source code for some of these messages, and felt like I needed to soak my keyboard in bleach.

Lately I have been pondering a question, which is “is spam a security threat?” Naturally, I think it is and furthermore I think that the only person who would argue otherwise is probably a spammer or a first amendment extremist. I am generalizing; not all spam is a security threat, but there is a percentage of it (like the previous chunk of spam I posted) where they try to get you going and coming: if you click the ‘unsubscribe’ option it takes you to a malware drive-by download.

I remember the heady days when the internet became “a big thing” (I was on the internet in 1980 and I have witnessed most of the trajectory so far) and people were going around saying it was going to change the world for the better. Perhaps it has – if our problem was ma1e enhanc3ment – but mostly I feel that it has turned into a swamp full of rotting tires, empty beer cans, used condoms, and industrial waste. Welcome to the future!