It’s safe to say that anyone with a shred of sense is horrified by Trump’s idea of having a military parade “bigger then the French one.” 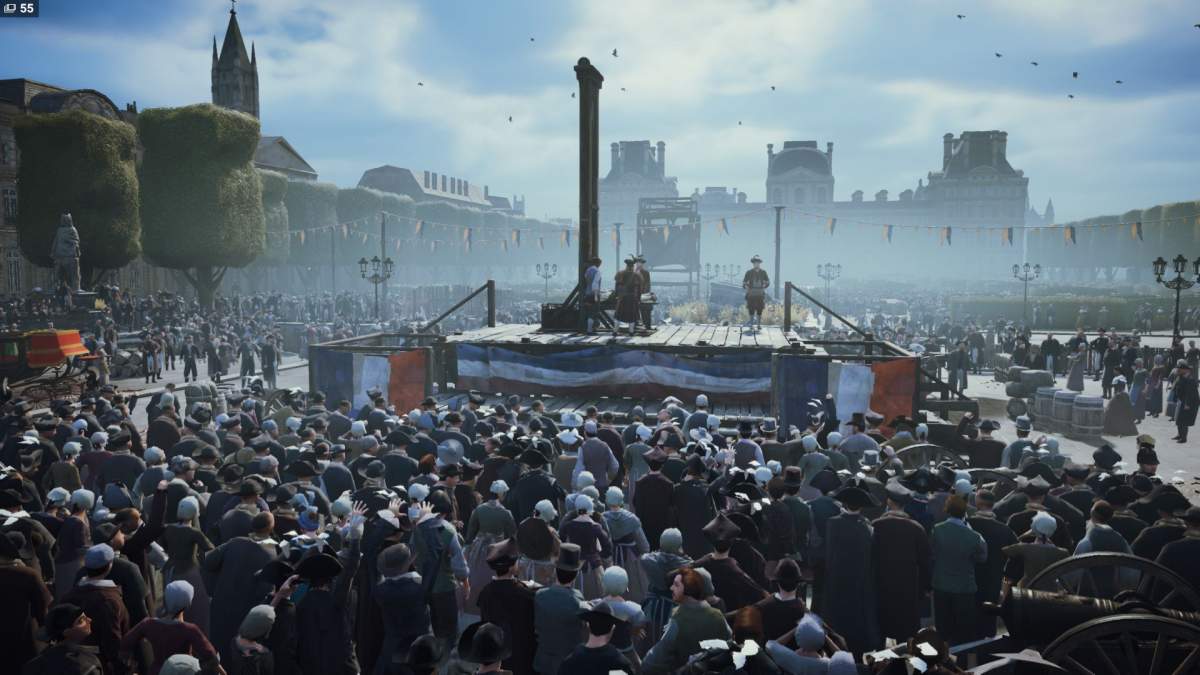 Doesn’t the idea of pulling a huge amount of military force into Washington, DC, seem like a set-up for a military coup? I’m sure that if Obama the stealth muslim Kenyan “manchurian candidate” was trying to have a parade in Washington, there would be gun-toting fringers all over the place, ready to defend their precious bodily fluidsliberties.

I actually do worry, slightly, that such an event could be a prelude to a putsch. I am much more concerned about a military/intelligence take-over than any other kind of threat. In part, that’s because it’s pretty clear to me that politicians from both parties are perfectly happy to make any compromise necessary in order to enhance their proximity to real power.

Hitler and Röhm’s original plan for what became “The beer hall putsch” was to strike when the military was planning a big parade in Munich on November 4th, 1923. Hitler’s plan was incompetent: a small force of stormtroopers were to seal off the military units, trapping them in the streets in a cross-fire with machine-guns. Whereupon, they were going to somehow be enticed to surrender en masse instead of breaking out through the buildings and starting a general melee between the 200 or so stormtroopers and several thousand regular army troops. The face of European history would have been changed – nobody would have ever heard of Hitler – if that had happened. But, the point remains: it’s a bad idea to have potential radical strong-men parading around capital cities with armed, formed, units of troops.

Following the “beer hall putsch” Hitler realized that a military coup was not the path to power – subverting the political system was. For all that many call Trump a “fascist” that’s what worries me most about him: he has an uncanny sense for subverting the system from within; possibly the only thing that is preventing him from a major power-grab is that he’s not as competent as Hitler was. And, in case you don’t know, I think Hitler was remarkably incompetent.

A competent coup was Napoleon Bonaparte’s coup on the 18 Brumaire – Bonaparte convinced the Revolutionary Council that a Jacobin revolt was coming the next morning, so the Council “strategically re-positioned” themselves to a place of safety, leaving young Napoleon in charge of all of the regular troops in Paris. The next day, he attempted to exercise authority and form a government, but was stoutly resisted by Jacobins (the original “leftists”) however, god was on the side of whoever had units of grenadiers and artillery, which happened to be Bonaparte. I hate to sound like a paranoid, but I can see events playing out similarly in Washington, right down to Congress’ taking to their heels and running for safety at the threat of an imaginary left-leaning force. At least they understand that, to proper Jacobins, both the Democrats and the Republicans belong up against the wall in a final bipartisan stand. 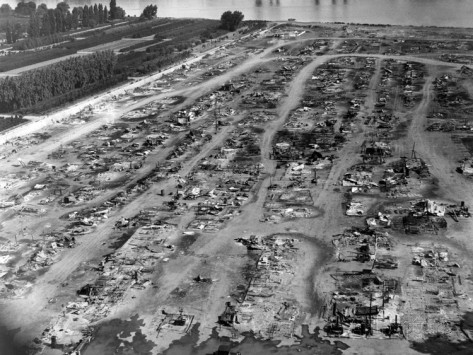 One army chases out another: the Bonus Army’s camp, bulldozed and razed, Anacostia flats, DC

Dwight Eisenhower was no stranger to running military troops through Washington. As a young soldier he was part of the force (along with Douglas MacArthur and George S. Patton) who went in to Washington and crushed the “Bonus Army” – depression-era veterans who had no jobs and noplace to go, who had camped out in Anacostia flats near where the Watergate Hotel is now.

Eisenhower’s inauguration included a military parade that’s right out of every petty dictator’s playbook. Remember that Eisenhower was – for all of his sanctimonious words – a militarist and imperialist who greatly expanded the military/industrial complex that he warned everyone about, as he walked off the stage. 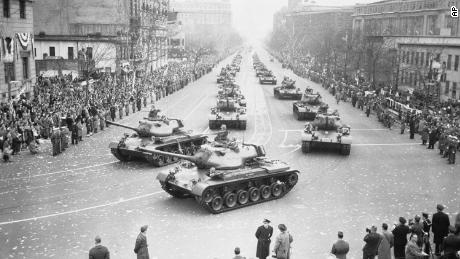 By the way, the tanks at Eisenhower’s inauguration were M-60 “Patton” tanks; the same type we occasionally glimpse the Egyptian military driving, and which the Turks are currently driving around in Afrin near Manbij. Those old death-traps are up against one generation-old antitank guided missiles; they may as well be made of cheddar cheese for all the protection they offer.

John Kennedy’s inauguration also had a military march. Kennedy was the “New Camelot” president who – with the advice of a host of counsellors – got the US more deeply stuck into the Vietnam War. Somehow, he remains a hero to many Americans, in spite of having nearly provoked WWIII by stationing medium-range ballistic missiles in Turkey and Italy, right in the Soviet Union’s back pocket, which encouraged the Soviets to respond in kind with missiles in Cuba. Kennedy managed to broker a deal with the Soviets that they would appear to back down unilaterally – doubtless Kennedy was already angling for re-election. An American president negotiating with the Russians to manipulate public perceptions before an election? It would never work. 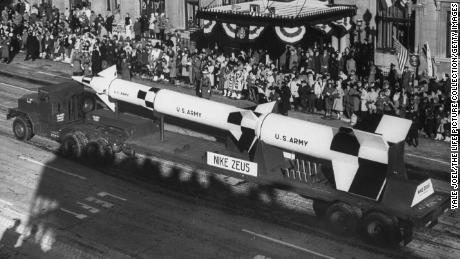 Missiles on display at the Kennedy inauguration

After Gulf War I, the US had a sort of a WWII-style ticker-tape parade in New York, [la times] celebrating the US’ brave victory at returning the lines on the map back to their original position, and slaughtering Saddam Hussein’s army, which was generally about Vietnam War-vintage, and completely outgunned and outclassed. The parade was pretty much like if Mike Tyson beat up PeeWee Herman and held a Roman-style victory parade afterward.

There was some grumbling, even from a Desert Storm veteran, Army enlisted man Jeff Benton of Milwaukee. “I think the celebration and things going on are a little too extreme,” Benton said. “The parade is sort of a campaign boost for Bush and the Republicans.” 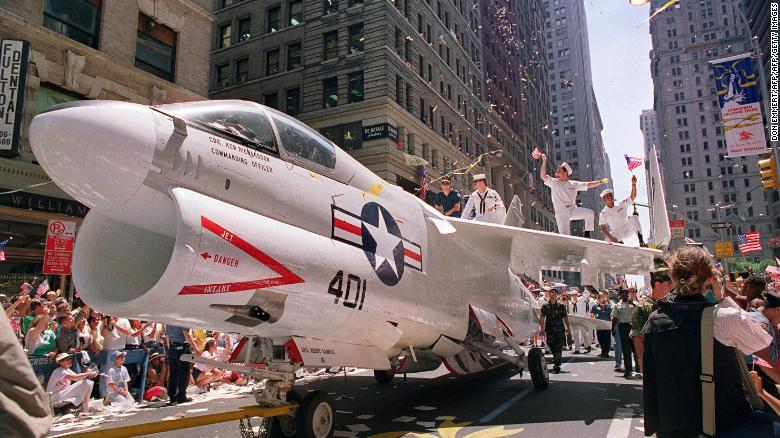 I see no glory in any of this. But it’s nothing new for dictators to want to rattle their sabers a bit and make scary noises. After all, Caligula had a “triumph” in Rome in which gauls dressed as goths were paraded as prisoners, and sea-shells collected on a beach were offered as evidence of Caligula’s forces triumphing over even Neptune.

The conspiracy theorists generally don’t pay much attention to history (except through a very long-distance distorting fun-house lens) so they probably can be spun up about the threat of a military parade that’s a cover-operation for a coup. I wonder which side they’d be on?

The Nike Zeus antiballistic missile pictured on display at the Kennedy inauguration is a bit of cheesy propaganda. For one thing, you’ll notice there’s no erector system on the carrier; the missile is just sitting there on display. Secondly, it’s almost certainly just an empty frame or even a mock-up. It had better have been – antiballistic missiles need to get off the ground on very short notice and generally that means they aren’t liquid-fuelled (at that time most liquid fuels depended on liquified oxygen) – you can’t sit around for an hour filling a rocket while rockets are coming in to destroy you in 30 minutes. Nobody, but nobody, would take a solid-fuelled rocket into downtown of some urban area; the thing is a gigantic roman candle.

Monday Meslier: 108 – It is False That The Dogma of Another Life Can be Consoling; and if it Were, it Would be No Proof That This Assertion is True » « The Weird Story About Russian Hackers and The Pee Tape