I’ve often wondered how accurate such polls are; I see no reason to believe that lawmakers answer them, and don’t just hand them off to an aide. Presumably, the aides hate them with the suppressed rage of a minion, and fill the polls out with the most surrealist answers they can think of. But we see over and over in human affairs that, once the mental inertia of a belief system begins to shift and people are willing to say they don’t agree, it falls apart fairly rapidly. 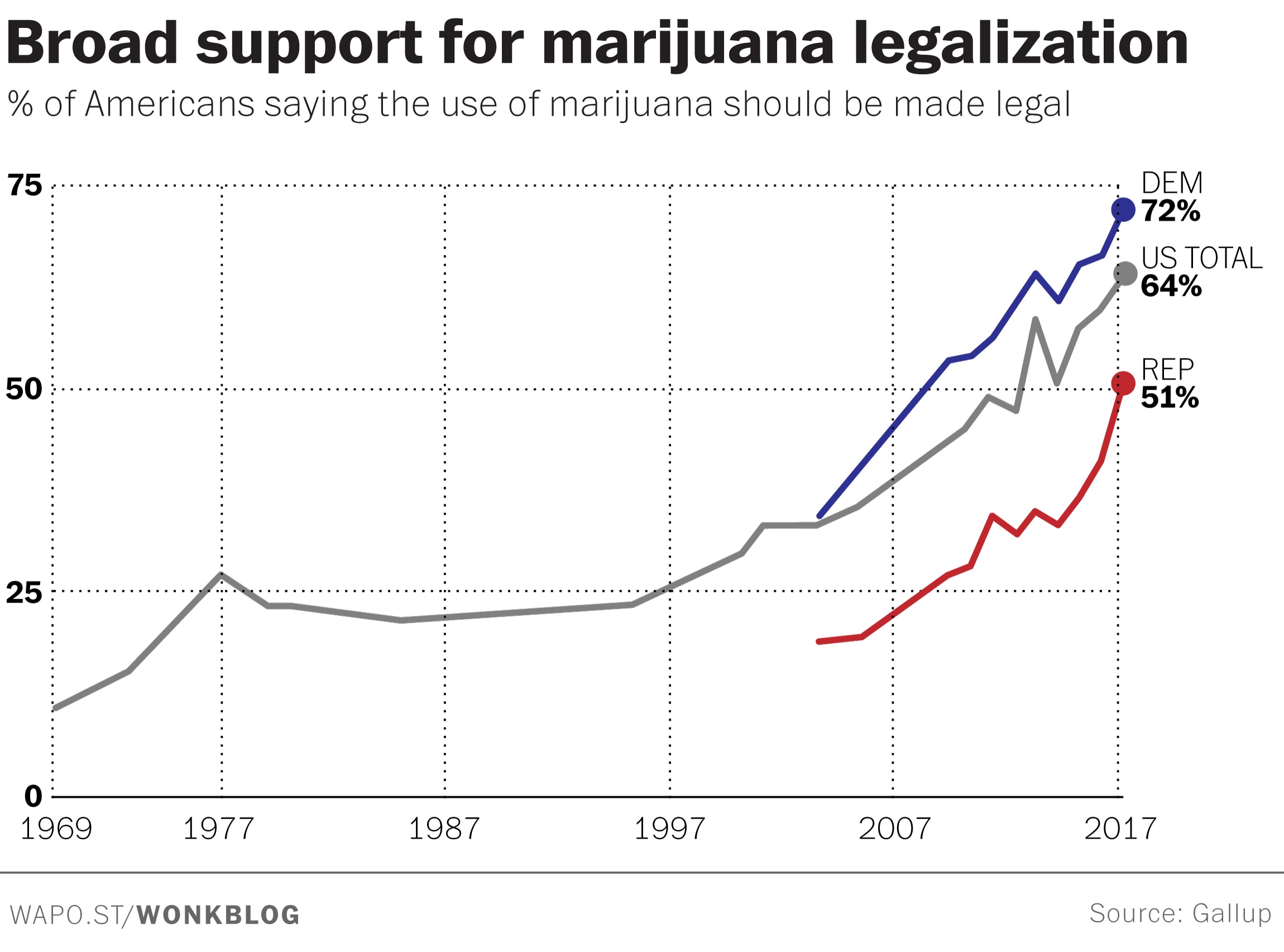 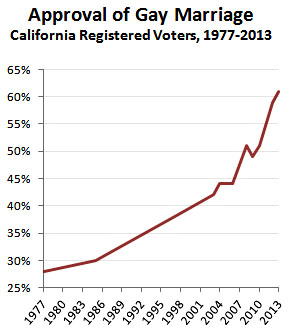 The change in approval rate, there, looks a lot like that for gay marriage, and – for all that there are annoying and regressive hold-outs – that flipped surprisingly quickly.

It seems to me like marijuana legalization is going to happen, and happen fairly hard except for in North Carolina, or Oklahoma (where it grows wild and my friends who live in Stillwater have to annually go around their yard with RoundUp and kill it) – the War On Drugs is switching to the War On Immigrants, and has exhausted its political usefulness.

Step over here behind the curtain and let me tell you what’s really going on. The lawmakers have realized that there is a gap that needs exploiting: that’s the gap between the effective price of marijuana (practically free) and the highly-inflated price that results from the War On Drugs.

I think we’re about to see a land-rush on the political side for the fat marijuana tax revenues, as taxation eats the gap between what ought to be more or less free, and what the risk of prison-time has artificially re-priced. 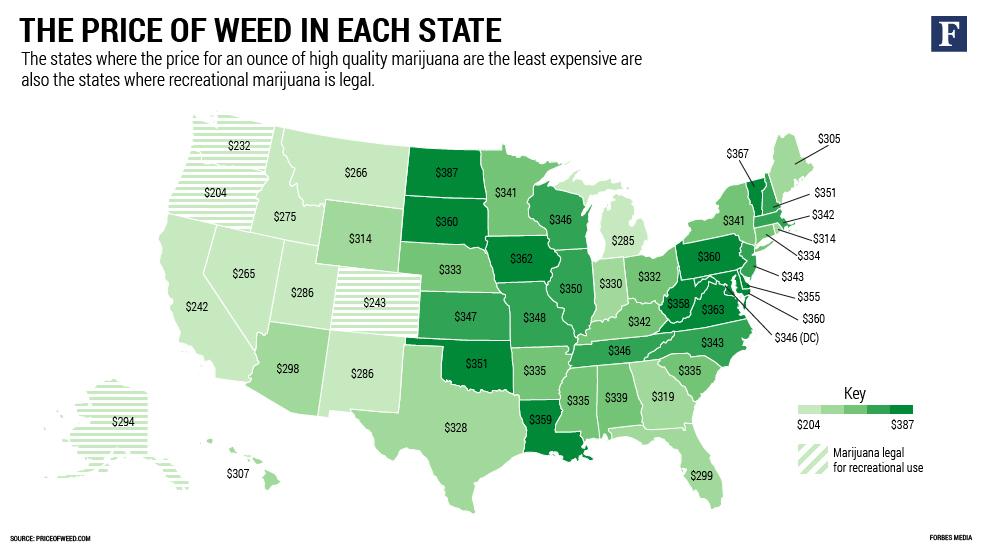 Forbes (behind an ad-blocker wall, so they get no link)

Back in 1999 I grew a couple of large marijuana plants in the bathroom of my house in Maryland – mostly because I loved the smell. I’m unfortunate: it doesn’t do much for me except make me feel a bit stupid and sleepy and I usually just head for the couch and end my day immediately. But, during the course of that experience, I discovered that a) anyone can grow marijuana easily b) it takes nearly no effort or skill to prepare c) it ought to cost about $1/lb. Not $250/oz. That’s the gap I’m referring to.

By the way, remember what I said about Oklahoma? On the Forbes map, the states I projected would be the hold-outs are the ones where it’s currently most expensive thanks to the downside risk of prison time. Consider the downside risk as a form of market manipulation, and you now understand the economics of smuggling 101. 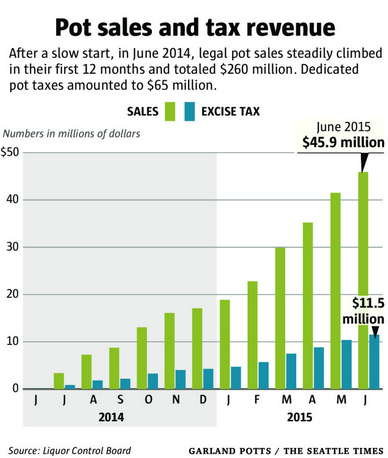 States like Colorado and Oregon, where it is legal, have been effectively undercutting the other states, which is interfering with their revenue models – state governments use the War On Drugs to transfer money from the private sector into the enforcement apparatus, and also use the War On Drugs to justify asset seizure – partial legalization is messing with that. It’s having the same effect that legalized gambling in Nevada did: all the politicians watch that tax revenue fly by and they drool enviously.

This is big business. Excise taxes on Alcohol raised $9.6 billion last year. Tobacco, in spite of reductions in its use, raised $14.5 billion. Why? What? Sure: “let’s screw the smokers!” sin taxes have been used as a regulatory mechanism for decades.

By now I’m sure you see what I’m saying is coming down the train tracks at you: legalized marijuana with regulation and tax-farming. Those 51% of republicans? They’re going to forget their hatred of new taxes for as long as it takes to artificially prop up the cost of marijuana by filling the gap between $300/oz and $1/oz with taxes. Besides, it’ll be for the troops. Federal excise taxes, going back to Hamilton’s taxes on whiskey (that triggered The Whiskey Rebellion) have always been one of the federal government’s favorite ways of claiming wars will be “self funding.” Like every federal excise tax, ever, it will fall disproportionately on the poor. 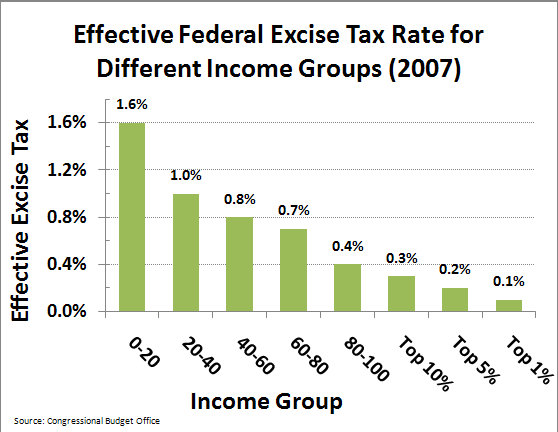 A rich person will have no problem going to Whole Foods and buying an ounce of organically-grown Jamaican Blue Mountain Fair Trade Blue Breeze (“Hand picked by teenaged virgins!”) for $299/oz. But, the wage-slave who wants to chill with a couple of bong hits of home-grown? No, we can’t have that.

It’s easy to make those predictions, because the wheels are already turning:

California’s legal marijuana marketplace is coming with a kaleidoscope of new taxes and fees that could influence where it is grown, how pot cookies and other munchies are produced and the price tag on just about everything.

Be ready for sticker shock.

On a retail level, it costs about $35 to buy a small bag of good quality medical marijuana in Los Angeles, enough to roll five or six joints.

But in 2018, when recreational sales take hold and additional taxes kick in, the cost of that same purchase in the new market is expected to increase at the retail counter to $50 or $60.

Here’s another data-point: big money is moving into the legal weed industry. To the point where old school illicit growers are concerned that they may be driven out of business. And the profits are attractive to Wall St. and other regulated industries. [bloomberg]

Alcohol giant Constellation Brands Inc. is making a foray into marijuana, a precedent-setting move for an industry that has mostly stayed on the sidelines during the cannabis boom.

Constellation will pay about $245 million Canadian ($191 million) for a 9.9 percent stake in Canopy Growth Corp., a Canadian seller of medicinal-marijuana products. The deal kicked off the biggest rally in nearly a year for Canopy, which trades on the Toronto Stock Exchange under the ticker WEED.

The legalization of marijuana in Canada and a growing number of U.S. states is opening up a huge potential market – just as demand for alcohol is slowing. Still, pot remains prohibited at the U.S. federal level, meaning American companies have to tread carefully.

Constellation, based in Victor, New York, said it has no plans to sell cannabis in the U.S. or other markets until it’s legal “at all government levels.” For now, it’s more a matter of identifying markets with growth potential, said Chief Executive Officer Rob Sands, whose company sells Corona beer, Svedka vodka and other brands.

In other words, Constellation is willing to bet $191 million that I’m right. And you know they’ve got lobbyists. When you’ve got publicly traded companies with lobbyists behind a market, it’s going to pop.

Here’s something that would really generate revenues:

I probably don’t need a disclaimer here, but: I think marijuana should be completely un-regulated. But that might hurt alcohol and tobacco tax revenue-farming. As I have mentioned before [stderr] none of this is about public health; it’s just a way of extracting wealth from the public and putting it in the hands of those who control society. 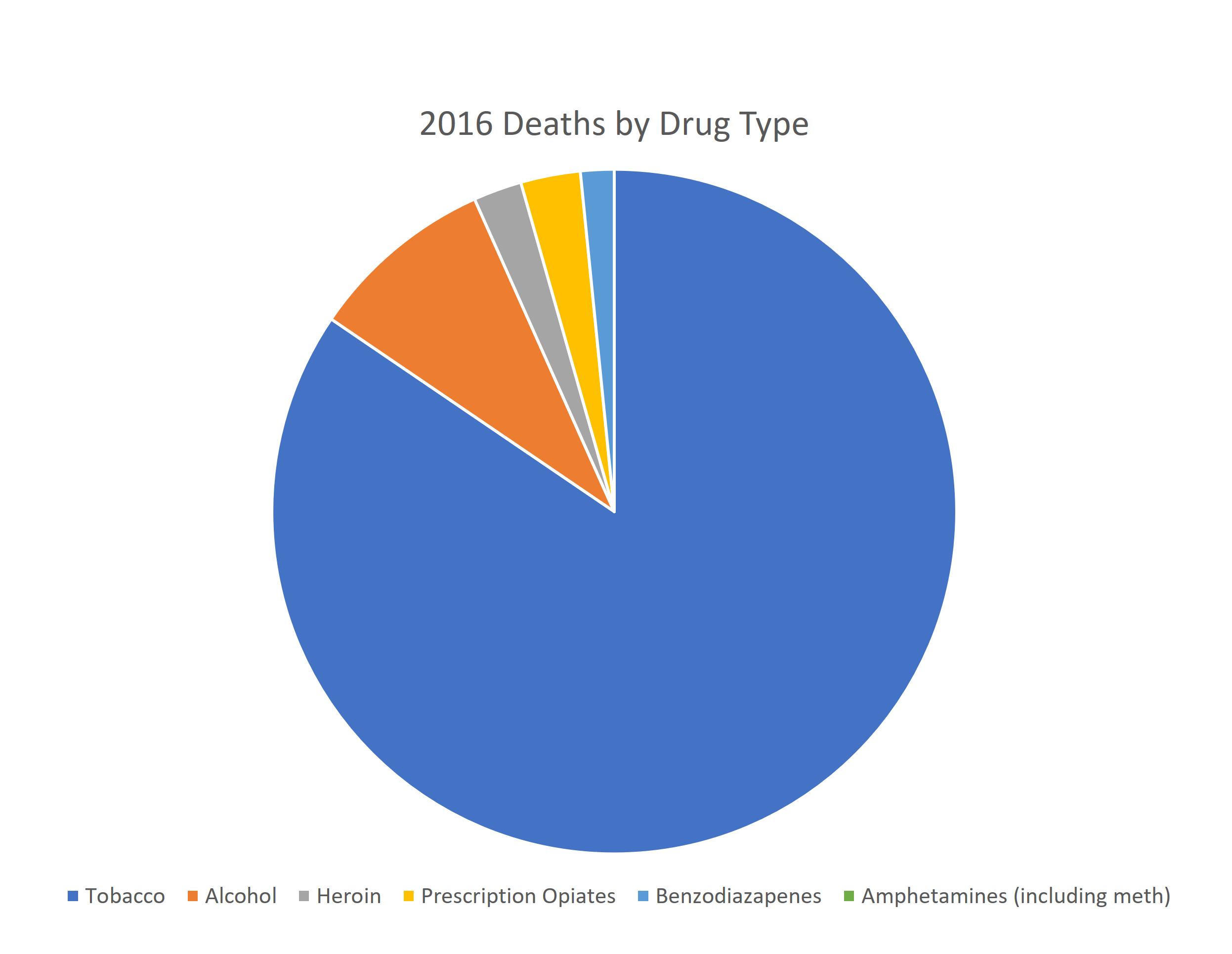 (I got these numbers from CDC’s report on 2015 deaths, 2016 deaths for opioids will be higher)

Look at where marijuana is on that chart! For that matter, look at what a crisis opiates are!