Here’s some more of my fascinating spam – another squint at the underbelly of the American nightmare: 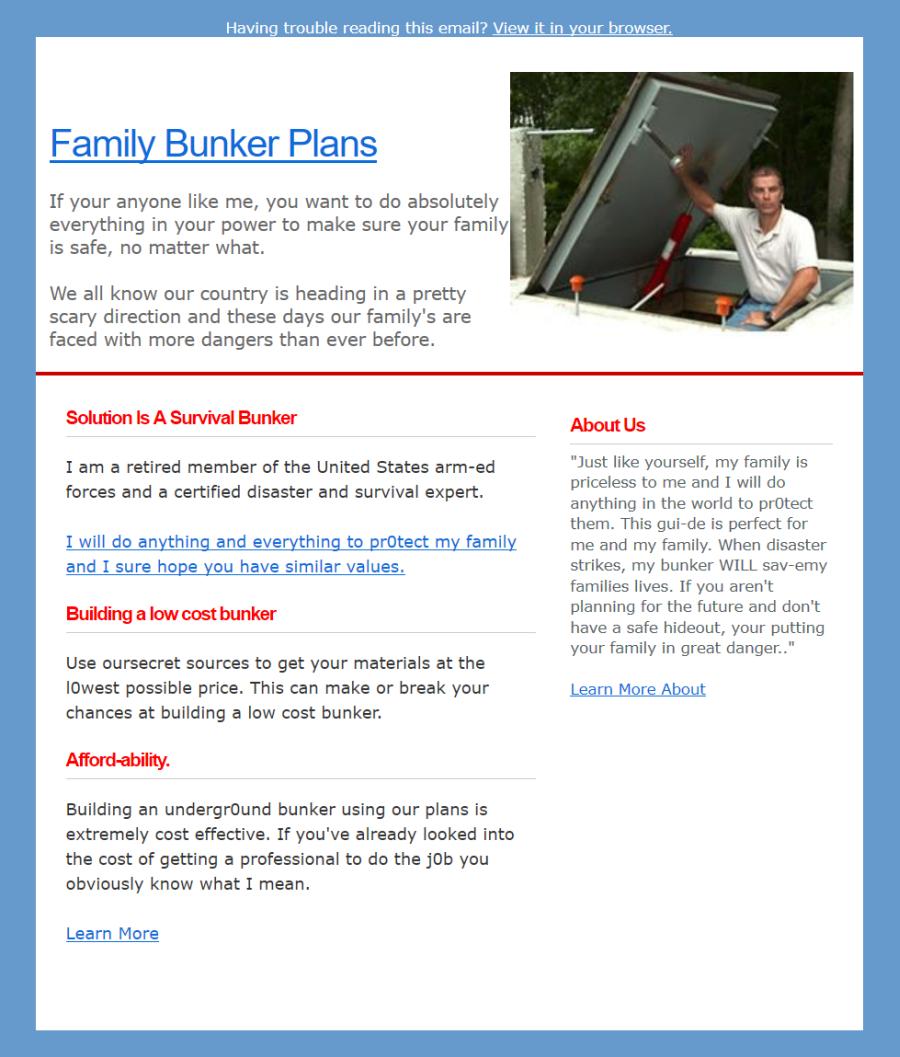 What I wouldn’t do is dig a nice hermetically sealable coffin for my family. Especially not one that was so obvious. It’s a death-trap, not a survival shelter. It needs a plaque attached to the door that reads: “Here lie the Smith Family.”

I have come to think of this as “toxic masculinity marketing” – all these stupid spike-pens and glare-proof sunglasses and guns: they’re just crap that’s being sold to men who have allowed themselves to become convinced that manliness is being ready to defend oneself against ambiguous threats, of even the most ridiculous type, at any time. It’s where Walter Mitty meets Rambo: some otherwise fairly normal guy, who – like most fairly normal guys – hardly ever gets in fights, or is attacked by bears, or uses a gun to defend their home; the sell is “if the shit goes down, you’ll be the guy with the gear and then …”  It always trails off. Why does it always trail off? Because if you actually start to think about the ramifications of social collapse, none of these measures make any sense, either. Why build a bunker when you can vacuum pack opium poppy seeds and hoard medicine? If a collapse happens, it won’t be the guy with the over-and-under night-vision enabled 5.56 with the 100-rd snail clip who gets the ‘females’ – it will be the guy who knows how to set up an alternator and a small windmill and battery farm. As usual, the guy with the fancy gun will be the guy with the alternator’s minion.

It’s hard to be more contemptuous of marketing, but these ads get me there – they are subliminally attacking their customers’ toxic masculinity under the pretense of building up their masculinity. “Oh, if you were a real man, you’d have a bunker…” but then there’s the bait and switch, the assumption that real men build bunkers, which is a lie. Normally I would avoid using terms like “real man” because it’s part of the trap in the first place; but what should I use instead? “Sensible people” might work, “thinking people” sounds a bit elitist, “solid thinkers” a bit humdrum – but, yes, sensible people don’t build bunkers, they partner up with their mates and extended families or tribes and take out the trash, dig latrines, teach kids about viruses and bacteria, and do the “gather” part of “hunt and gather.” Toxic masculinity is not what saves families after a nuclear war – it’s what starts nuclear wars.

Death-trap: that door is just asking for someone to park a truck on top of it. Have a nice day sucker!

FYI – the weird misspellings are an attempt to defeat single-word bayesian spam filters.

I Had No Idea This Was a Thing » « What Happened to Kurdistan?