It sounds like the Kurds have been out-maneuvered by the Iraqi regime; then left twisting in the wind by their American backers. Iraqi Abrams M-1 tanks (which are basically invincible against the light vehicles the Kurds have) were the convincing argument – the Iraqis inter-penetrated Kurdish positions in the Kirkuk area, essentially a peaceful “overrun” maneuver – and the Kurds realized that if they offered resistance, they’d be slaughtered.

The situation doesn’t look good for the Kurds, at all: the Iraqi military didn’t stop at Kirkuk, nor did they allow the Kurds to hold the oil wells north of the city – they are pushing north and expanding their area of control, which puts the Iraqi forces on a bee-line for Erbil, the capital of Iraqi Kurdistan. 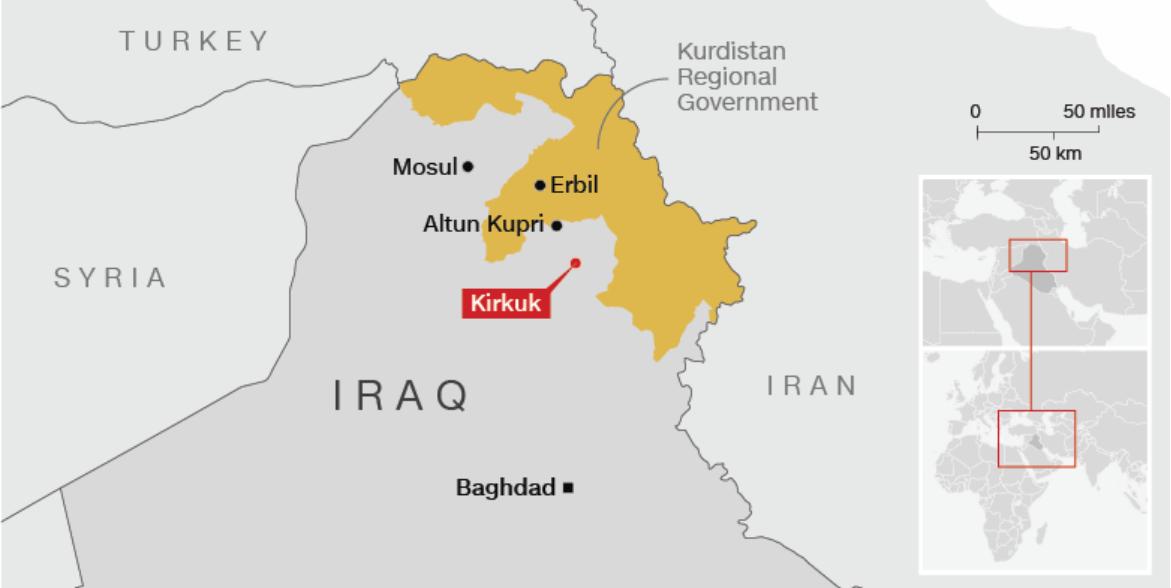 Territorial holdings as of this week [source]

At present, the Iraqi military is pushing the Kurds out of Altun Kupri. It appears that the news is downplaying the situation pretty hard. We’re not seeing a lot of reporting on the fighting – wait – “fighting?” Yes.

According to local reports the Kurdish forces near Altun Kupri tried to blow up a bridge to slow the Iraqi advance. Kurdish forces were armed with heavy machine guns and at least one howitzer, but footage indicated the Iraqi forces had a dozen artillery pieces with them and large numbers of armored Humvees. Footage showed Kurds sheltering behind hastily made defensive berms with a plethora of vehicles, including pickup truck “technical”, improvised trucks usually kitted out with a heavy machine gun or anti-aircraft cannons on the back. The mismatched forces, with the Iraqis using standardized US-equipment and the Kurds making due with a mish-mash of weapons illustrates what three years of war against ISIS has done to both groups of fighters. The US has trained almost 80,000 Iraqi soldiers and around 25,000 Peshmerga. Kurdish forces often lack the anti-armor weapons needed to slow down vehicles and have few responses to Iraq’s M1A1 Abrams. [jerusalem post]

The Kurds have a problem because they are mostly irregular troops, which were ideal for use as shock troops in house-to-house fighting, but they don’t have the kind of command/control and battlefield doctrine the US-trained Iraqi military have. The Iraqi military also have heavy artillery, which is the ideal tool for this kind of “ethnic cleansing lite” – you blast everything flat ahead of you and advance through the rubble.

Perhaps the reason that the US press is not covering what’s happening is because of the involvement of Iran:

Kurds say that the Iraqi forces include not only elite Counter-Terrorism fighters but also Iranian-backed Shia militias often called Hashd al-Shaabi. Iraqis tend to stress that this is an Iraqi army operation, whereas Kurds emphasize the Iranian role. There are also divisions within the Kurdish side with some Kurdish leaders associated with the Patriotic Union of Kurdistan supporting the Iraqi army against Kurdish forces associated with the Kurdistan Democratic Party.

Because of internal divisions in Kurdistan, they have probably divided and conquered themselves; my bet is that the Iraqi government is going to push all the way to Erbil. We may be about to see Kurdistan turning into a humanitarian disaster and genocide, when a few weeks ago we were thinking we might see a new ethno-nationalism.

The US’ strategy has played out exactly the way it was not supposed to: Iran is greatly strengthened, the alliance with Turkey is mortally damaged, and there will not be a client state in Kurdistan. 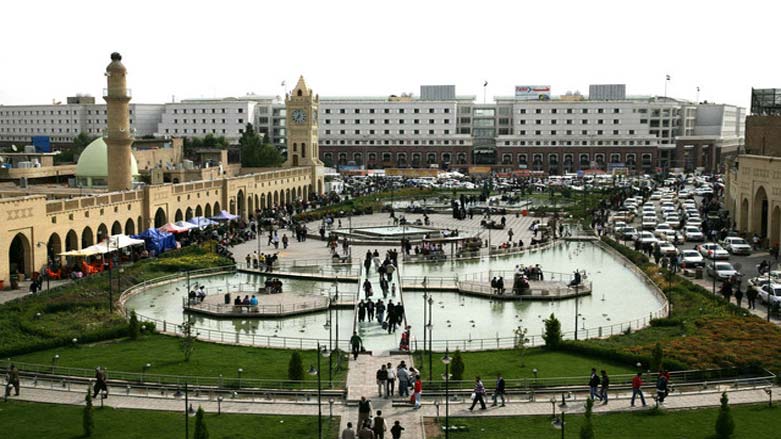 Erbil is a beautiful city. I hope we don’t have to watch US-made tanks and artillery, accompanied by Iranian militias, blasting it flat. I am afraid that the beast that devoured Raqqa and Mosul and Kirkuk is snuffling and lurching toward Erbil.

It seems that violent authoritarian nationalism is on the ascendant, worldwide – and I think the US’ political tone should get its share of the blame for that.  American use of military force and unwillingness to negotiate fairly has demonstrated to authoritarian regimes around the world that military force is effective and that repression works. Worse, the US has demonstrated that weapons of mass destruction are the best path for a third-rate power to protect itself – the world has become a much more dangerous place in the last decade, not a safer or better one. 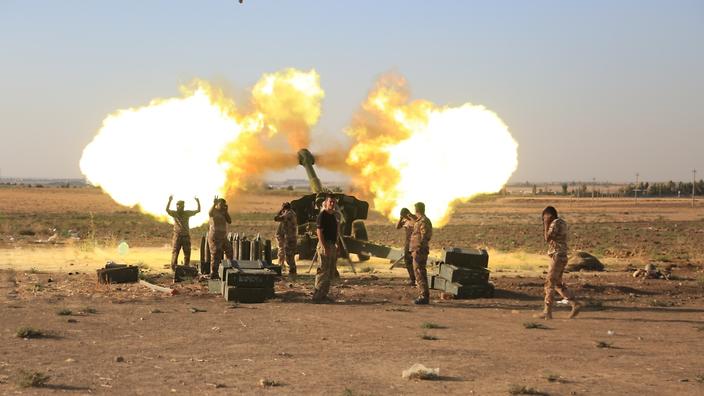 Iraqi military fire US-provided 155mm howitzers at Altun Kupri, while a US “advisor” mugs for the camera [source] This is the face of US foreign policy: grinning assholes firing high explosive area bombardment (a war crime)

In Catalonia, it seems that Spain has decided that authoritarianism is the path to pursue. They’ve been pursuing that strategy effectively for a long time, why stop now?

Meanwhile, ISIS has been more or less turned from a proto-nation-state into an insurgency, with the fall of its capital Raqqa. The US coalition did to Raqqa as the Russians did to Grozny: they bombed it flat and marched in over the rubble. Then, they declared “freedom!” Or, as Tacitus said it better: 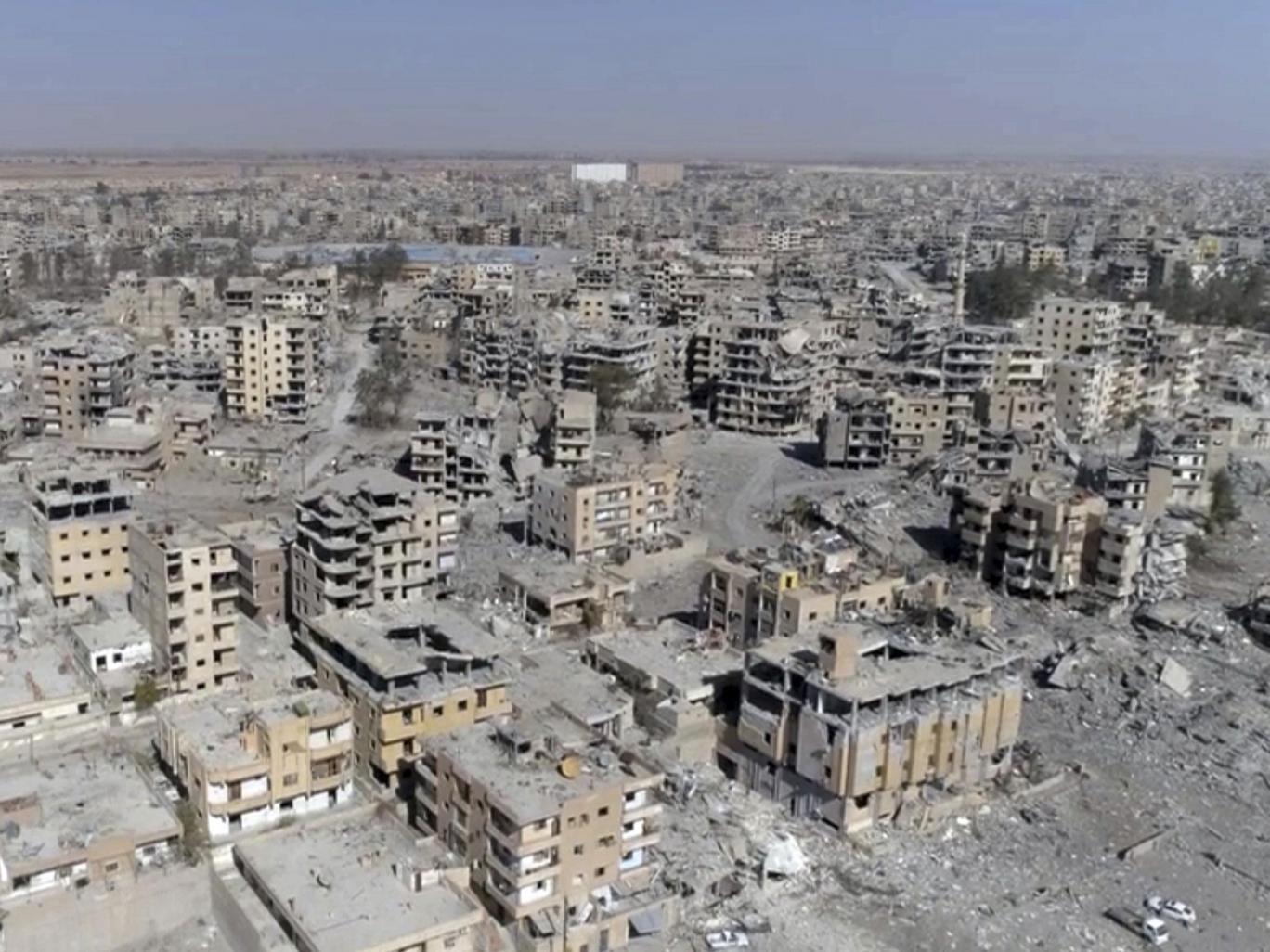 One other side-effect of the swirling mess going on: US military technology is now everywhere and in everyone’s hands. I doubt the Iranians will try to build their own Abrams tanks, but there are multiple generations of ATGM and AA missiles all over the place; I’m sure technology intelligence officers are having a field day.