This isn’t a piece of translated Voltaire; it’s something I found on Ebay. Occasionally things signed by Voltaire show up, but they are usually extremely expensive ($100,000+) or the have a brief ‘V’ signature.

I don’t have a ghost of a hope of picking up anything like that; I just have an Ebay search in so I can torture myself and keep an eye on what crops up in the bibliophile market. I can also tell you that anything signed by Napoleon Bonaparte is pretty much ridiculously expensive, or a forgery, or both. 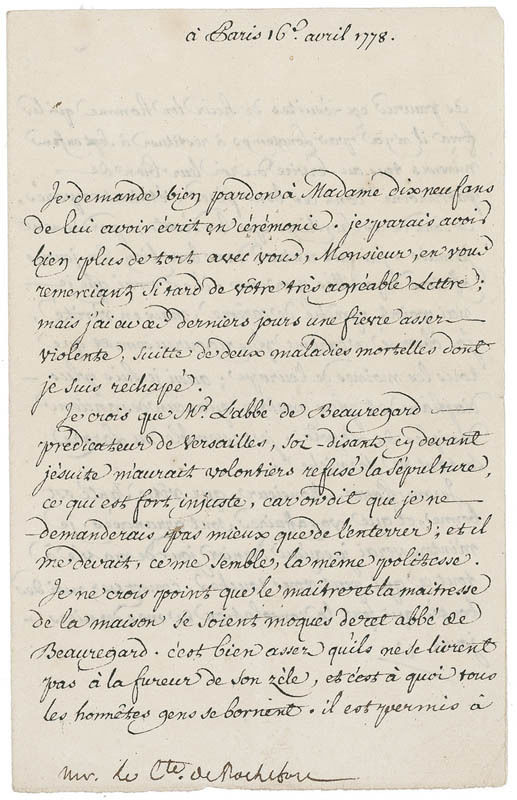 I just love his handwriting! 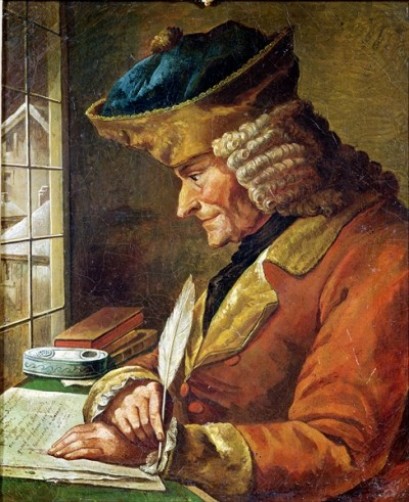 Voltaire wrote over 900 books and uncountable letters. On a good day when I was playing CEO at a start-up, I would sometimes send 150-200 emails. Most of the time, I was much less productive (meetings, sleep, stuff like that) – Voltaire wrote dozens of letters a day. This was probably done with a brass nib or a glass nib and an ink-pot.

When some of us started trying to train my father to use Email (he wrote all of his books manuscript, and did all his correspondance on an old Smith Corona) I laughed when I watched a documentary on Harlan Ellison, who keeps a closet full of old Underwood typewriters, just in case – dad doesn’t keep spare typewriters; we used to just fix the darned things on the very rare occasions that they break. Mom finally decommissioned the IBM Selectric for a computer, and Word Perfect. Anyhow – sorry, I digressed there – dad insisted that Email should be structured like a letter, or it wasn’t proper respectful communication. I tried a novel attack: “Email is more like a post card! It’s informal and it’s understood that it’s no disrespect to just say ‘Having Fun Wish You Were Here!'”  Dad’s response was to pull out a facsimilies of short letters from Voltaire, Richelieu, and (the nail in my coffin) Bonaparte. It’s hard to win arguments with my dad. I mean, if you’re right, he’ll acknowledge it immediately and won’t pull any Sam Harris “I’m right no matter what I say” rhetoric; the man is the pinnacle of intellectual integrity – he’s just right about a whole lot of stuff, a whole lot of the time.

The reason I doubt that letter was written with a quill pen is that quill pens tended to sometimes separate at the nib, which brass or glass didn’t. I spent a lot of time watching over the shoulder of France’s greatest living heraldrist (now gone) [d] and even he sometimes cursed quill pens. He taught me how to cut a quill, though, which was seriously cool for a 10-year-old. On the other hand, nobody wrote as much as Voltaire; it’s possible that his hands were simply blessed by the muses.

(That simple letter was on Ebay for $45,000. I think Voltaire would laugh at the ridiculousness. He’d immediately hand you his laundry list and recipe for lemonade and encourage you to get whatever you could for them. In fact, the Voltaire I’ve read about would make 5 copies of his recipe for lemonade, and give one of them to one of his enemies and sell the rest on Ebay.)