This is part of a short series that I will try to drop over the course of the year. I grew up reading National Geographic and it wasn’t until I was well into my adulthood that I discovered that I had been absorbing subtle doses of propaganda along with the cool stuff that excited and inspired me. While you’re reading about this one, you may be thinking “What about PROJECT JENNIFER?!” and, if you are, don’t worry – I’ll get to that one eventually, too.

I was captivated by the pictures they brought back from the deep trenches; the anglerfish, the skeletal long fish that looked like a life-support system for a set of crystal teeth, the vents that may be our distant ancestral homes. Exploring inner space, the deep frontier – I remember 1934 issues of National Geographic featuring pictures of Beebe and Barton, who pioneered the modern “stainless steel cannonball” design of bathysphere. Beebe’s design had a problem, that it was completely tethered to the ship above it, and it couldn’t move around. That turned out to be highly relevant. And, in the 1970s there was the Johnson Sea Link submersible disaster, in which a submersible got caught in wreckage and two of its crew suffocated; that was newsworthy and dramatic and I read about it in the newspapers that summer, while I breathed the plentiful clear air of Southern France in June. [wik] 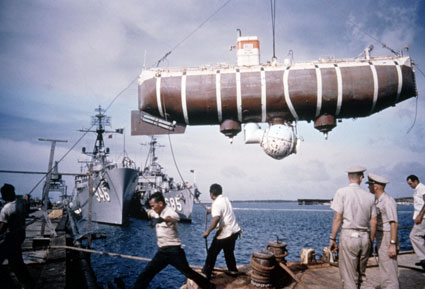 Then there was Trieste.

Trieste was a bathysphere suspended below a gigantic gasoline-tank to provide bouyancy – a brilliant safety design because the gasoline couldn’t compress any further, yet was lighter than water; they didn’t have to keep the pressure from collapsing the tank. The submersible carried some sandbags that could be dropped to re-balance it to rise. Basically, it was a hot air balloon design that worked in water, and it was theoretically capable of surviving to any depth that humans thought oceans extended to.

The Navy had bought the Trieste in 1958, not to set a world’s record, but as a scientific platform. It was carefully evaluated during the summer of ’57 by a group of ocean researchers: A biologist, an acoustics guy, a geological oceanographer. They chartered it to see if such a platform would be useful for naval research and decided, yeah, having the trained mind and trained eye right at a deep-sea work site would be ideal.

Admiral Arleigh Burke finally, tentatively, approved it, but conditionally: There would be no publicity. If you come back, we’ll publicize it, he said. But if you don’t, no one will know about it. Satellite launches were failing, there was lots of publicity, and it was embarrassing. He didn’t want more of that.

The satellite launches that were failing: those were CORONA spy satellites. 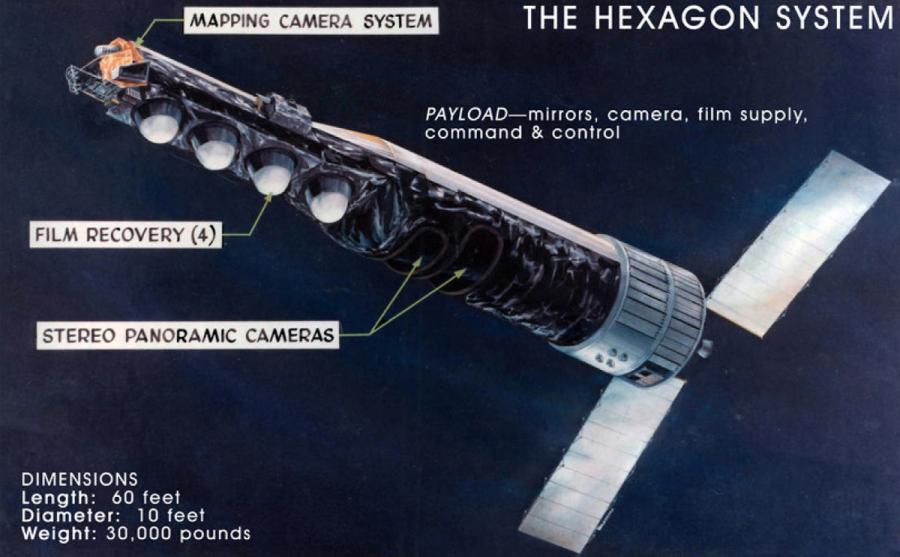 By 1971, the CORONA satellites had evolved to the vastly more capable HEXAGON (KH-9) system, which sported twin cameras so the photo interpreter could see in 3D. HEXAGON still used the CORONA technique of dropping a “bucket” full of film that was snagged in descent by an airplane towing a wire loop. [stderr] By the time HEXAGON was flying, there was no longer any cover story regarding the satellite launches – the denizens of the world had become jaded by rockets and ballistic missile tests. The spy satellite program of the time was now deeply wedded to the ballistic missile program; HEXAGON flew up on TITAN-II boosters designed to deliver nuclear death. 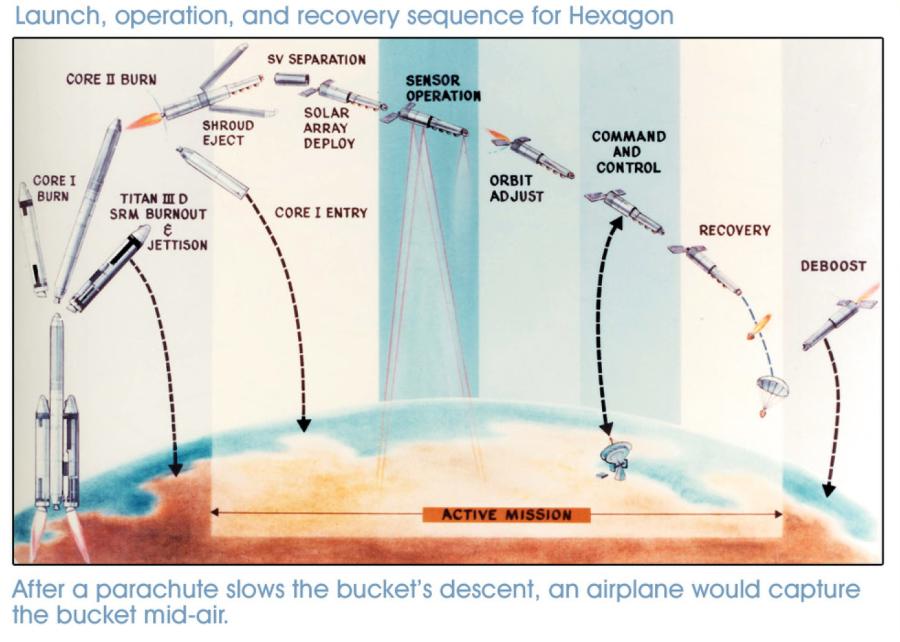 Somewhere around the time when the Trieste had proved its function, another was built. Trieste II – which didn’t get as much news attention. Another deep diver, Alvin, was being developed too, that was more mobile and had gripper arms that could be used for “sampling” – National Geographic covered Alvin too. [ng] Stories about Alvin and her unnamed sister-ship aren’t declassified yet but most likely she was used to lay the SOSUS [wik] line of submarine-tracking sono-sensors that listen for Soviet attack subs and missile boats. SOSUS went live in 1961; the timing of all these things is a bit of a giveaway. There was another mystery-ship built around that time, which carried the first full-featured side-scanning radar; it was capable of resolving incredibly accurate pictures of the ocean bottom. The side-scanning ship would virtually certainly have been able to easily find Titanic and other lost items but its descendants’ capabilities are still classified so the intelligence community would be reluctant to use the capability to find things like MH370. 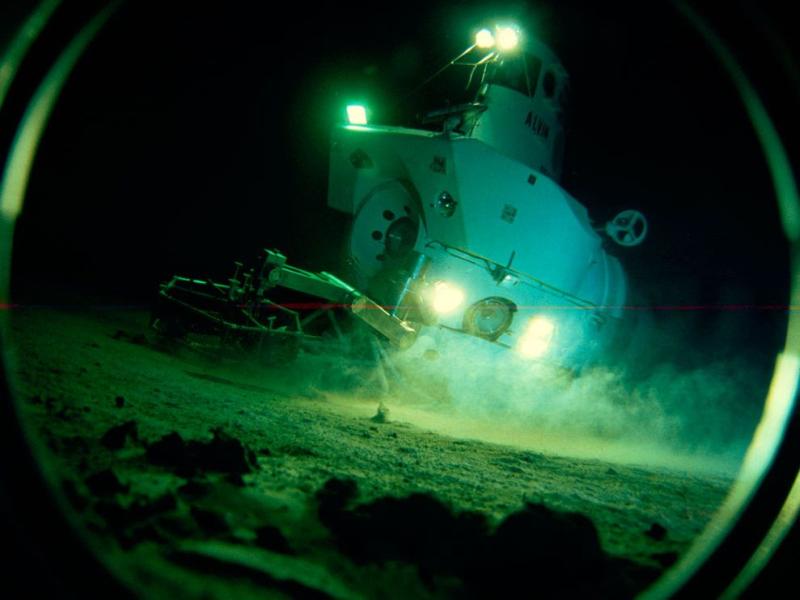 Alvin; the picture was probably taken from its remotely piloted drone (was featured in National Geographic) 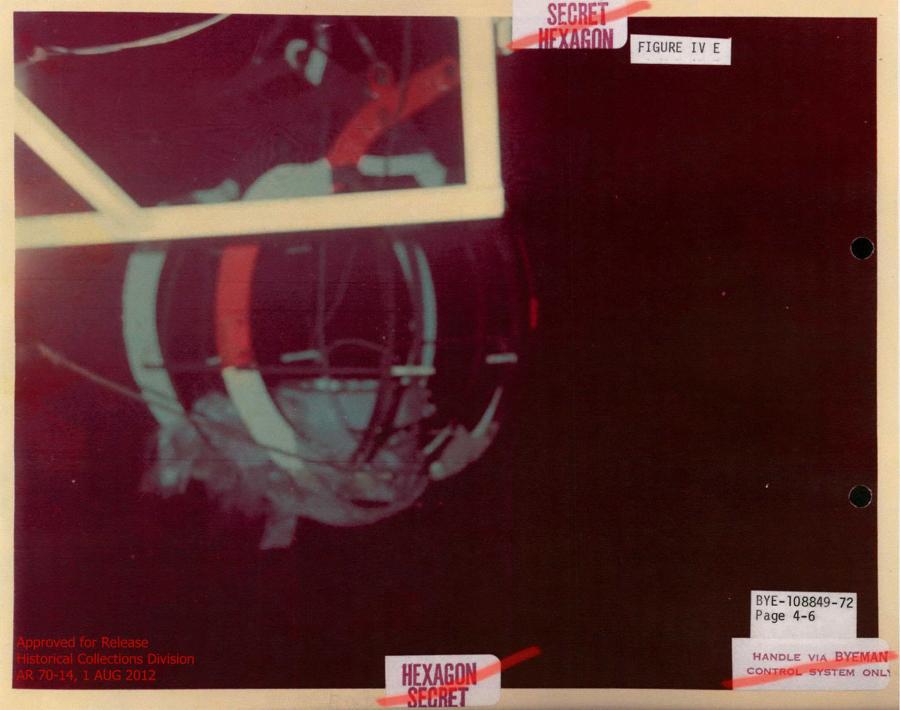 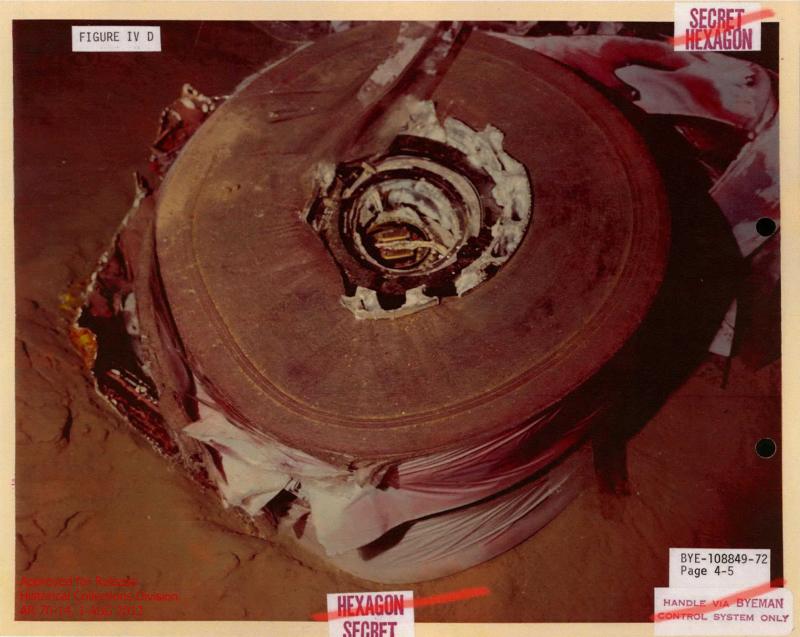 Reel of film sitting on the bottom, 5km down from the surface. Orbit to bottom ocean, that’s quite a transition.

But, all was not lost. The mission proved to be a valuable test of the Navy’s ability to carry out deep-sea recovery expeditions. In the report, CIA officials discussed some of the lessons learned, particularly from setbacks that were experienced on all three attempts.

“The third dive, the mechanical arm failed to work, almost preventing operation of the recovery device,” the report said. “The on-board computer has never worked. Much more attention is required to the use of high reliability parts and extensive subsystem testing to assure confidence in any given operation.”

The deep sea capabilities of the US have been a closely guarded secret for a very long time, since one never knows when something might come in handy. There’s a story (that hasn’t been declassified enough to write about, yet) that a certain Soviet submarine sank with a complement of nuclear weapons on board; when the Soviets later mounted a recovery effort they were nonplussed to discover that something had cut the ship apart enough to remove at least one warhead. I’ll bet that something was Alvin‘s classified sister-ship; think what an amazing story some smallish crew of people have been keeping secret for 30+ years. I don’t think the words “nautical adventure” begin to cover being miles under water in the dark, in a refrigerator-sized chamber with another person for days using little waldoes to torch apart a ballistic missile submarine to harvest Shiva The Destroyer’s eggs and bring them back to the surface.

Back, before I got more strident about my views regarding intelligence and secrecy, I had a friend who was an intelligence officer at CIA. Once time, for fun, I tried to feel him up a bit about JENNIFER, by asking “what happens when there’s an accident on a mission like that?” He said, “we call it a training accident and someone gets a visit and a letter.” And that was that. It could be, a truck backed up over you, or it could be you got shot by a militia somewhere, or it could be you ran out of air 2 miles down, in the silent dark.

I am not saying that the intelligence community shouldn’t do these things. Nor am I saying that National Geographic is wrong for acting as a cover for intelligence operations. It’s my opinion, however, that a great deal of this stuff could be done much more openly, with much less secrecy. It probably wouldn’t really matter, and the thrilling exploration and amazing feats deserve to be applauded because they are flat-out legendary. Researching the new information about this story, I admit I was shocked to learn that Trieste‘s dive might have been kept secret if it failed. “Training accident.” Humanity has learned a great deal of valuable stuff as a byproduct of pointless nationalist pissing contests.

So, I heard a story once about white-knuckled system administration. It’s not my story so I don’t know if it’s true; I wasn’t there, etc. But it’s such a good story I’ll repeat it in spite of the caveats. Apparently this organization that was responsible for doing stuff with a ship a lot like Alvin used to have a weekly meeting for all the project leaders – I’ve been in those meetings – you know, the dreaded Monday morning “go around the room and everyone says what’s up” meeting. So as the meeting proceeds, it comes around to one system administrator who says “we pushed a new patch for the network interfaces on all the systems, and bounced them.” At which point one of the other project leaders jumps out of his chair, “did you patch IP address range xx.xx.xx.?” The systems admin says “yeah, wh-?” and halfway through the sentence the other team lead jumps across the table, grabs him around the throat, and starts choking the systems admin. Finally everyone pulls him off and calm is restored and the meeting is adjourned. The person who told me the story says, as the red-faced system admin was being escorted from the room, the project leader yelled, “those machines you just bricked are 2 miles down all over the !*#&! continental shelf and they all stopped responding last night. Can you drive a bathyscaphe?” Sounds like that was almost a training accident.

Kurdistan Independence Vote Today – » « Surely I’m Not the First to Observe This!