The other day I posted a photo I found when looking for images about the many bombings that took place in the US in 1968.

The photo didn’t really have anything to do with bombings, per se, but it was an incredible photo (served up by Google because Grand Central Terminal was often considered a potential target by bombers and law enforcement) [stderr]  I did a few reverse-image searches with tineye, and that led me to a mother-lode of great photography from the early 20th century. 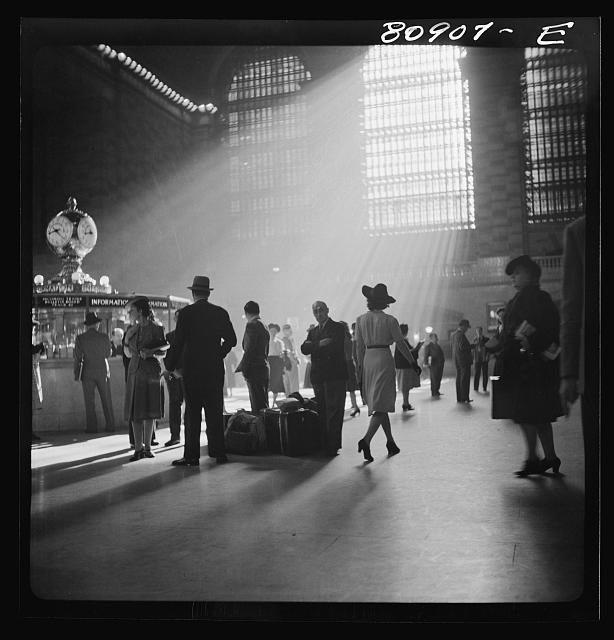 John Collier was part of the Farm Administration/War Office effort to document American life – all of which is now available from the Library Of Congress. There’s Gordon Parks there, too; basically, a gigantic make-work program for arts and culture, which matched the equally giant technology and infrastructure make-work programs. Things were built, then, that simply never could be, today: dams, roads, national parks, bridges. When certain people talk about ‘tax and spend’ this is what they’re deriding: a massive movement of money from where it was piling up in capitalist and war profiteers’ bank accounts (let me use blunt language) and putting it to work to stimulate the civilian economy. Nowadays, when ultra-nationalists talk about “make america great again” they’re usually coupling that with a self-abnegating desire to break up unions, and cut taxes for the wealthy, and what they don’t realize is that those jobs they’re crying over are a knock-on effect of the massive civil engineering and militarization the US underwent after WWI and WWII. 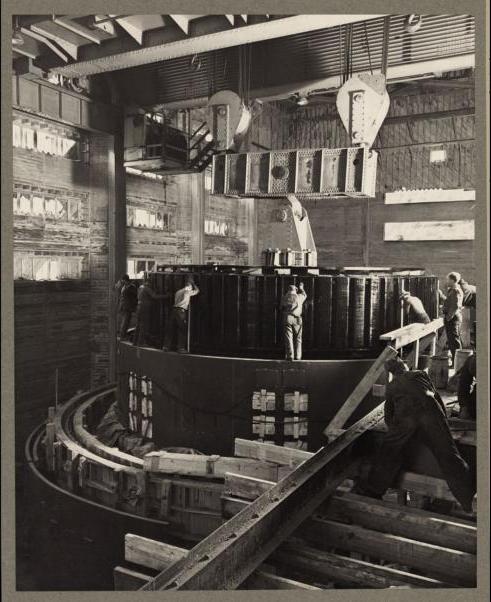 Installing a generator at the Norris Dam, 1935

I don’t know what I like most: the number of jobs that installing the generator created, or the composition and lighting in the photo. I’m going to go with “both.” Where do giant generators come from, today? In 1935 they came from Pittsburgh, PA, and Rochester, NY, and Altoona, PA – the giant, smoking playgrounds of capitalists like Morgan, Carnegie, and Frick. Now they come from Sichuan in China [dongf] – it was more profitable for the capitalists to have them built there, and profits, not jobs, are what capitalists want. 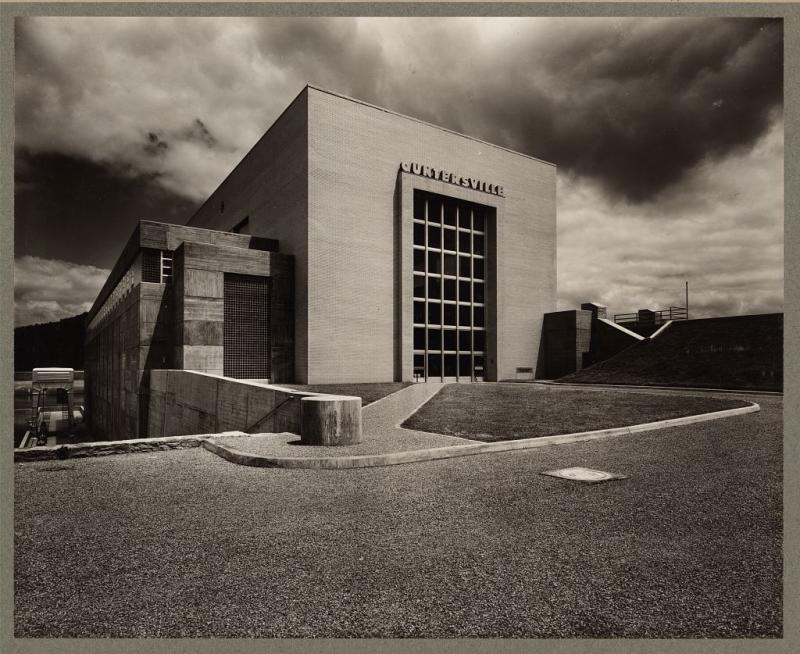 Steel and concrete, film and developer. Nowadays there are “fine art” photographers who try desperately to get tonal ranges and moods like that. This was just documenting the second American industrial age. 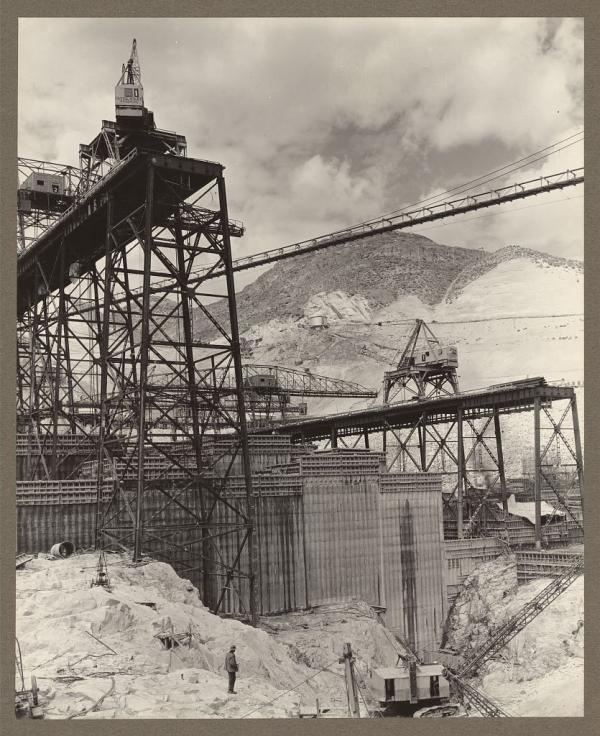 Pouring the spillways at the Grand Coulee Dam, 193?

Steel and concrete, earth-moving machines. The earth-moving machines became the technique for mountain-top strip-mining as it was practiced in Pennsylvania and Tennessee. The giant hydroelectric power plants produced the gigantic amounts of electricity needed for the Manahattan Project, Hanford, Oak Ridge. Oak Ridge,during its heyday created 75,000 jobs. That’s not a typo. 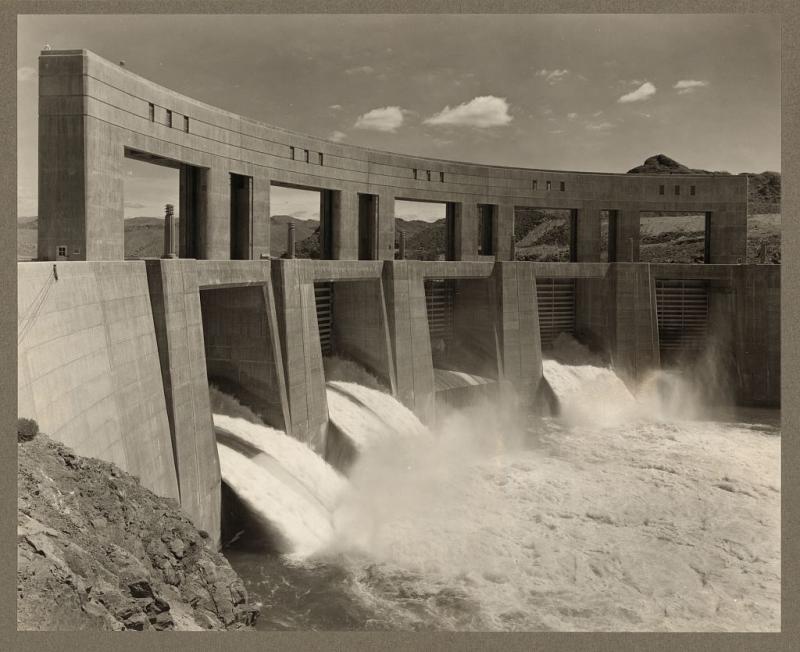 Industrial-age art of industrial age art. Art and jobs. As a photographer, I am green with envy at the composition, use of lighting, and exposure. I think “sure, I’d have gone blacker on my blacks” but this was the photographic paper of the time. I’d guess this was probably shot on a 4×5 view camera – notice how the photographer made sure the verticals at each end of the dam’s top-structure are correct? It’s hard to do that with an SLR. And look at the little door on the left-hand side of the top-structure! Suddenly, you realize that those “vents” along the top of the curve are probably windows for viewing the spillway. Hubris! 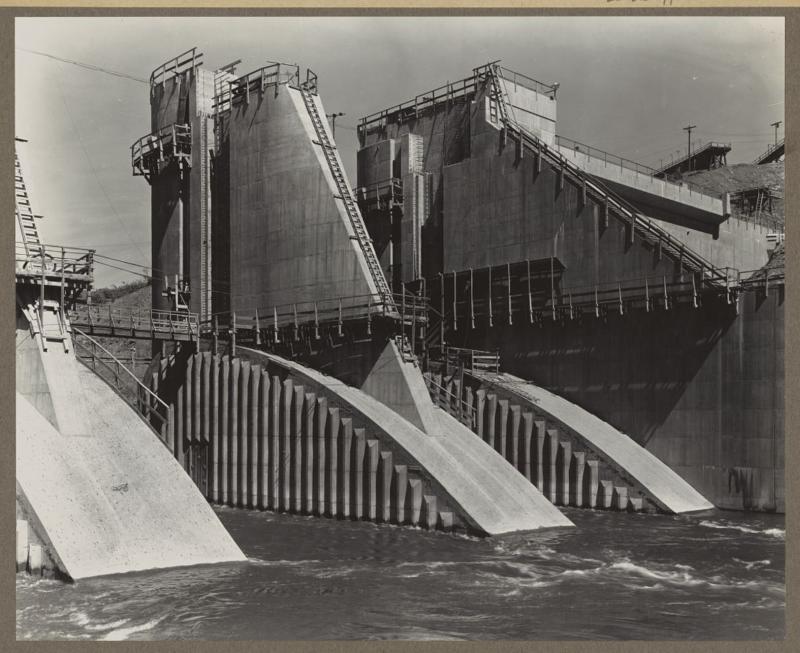 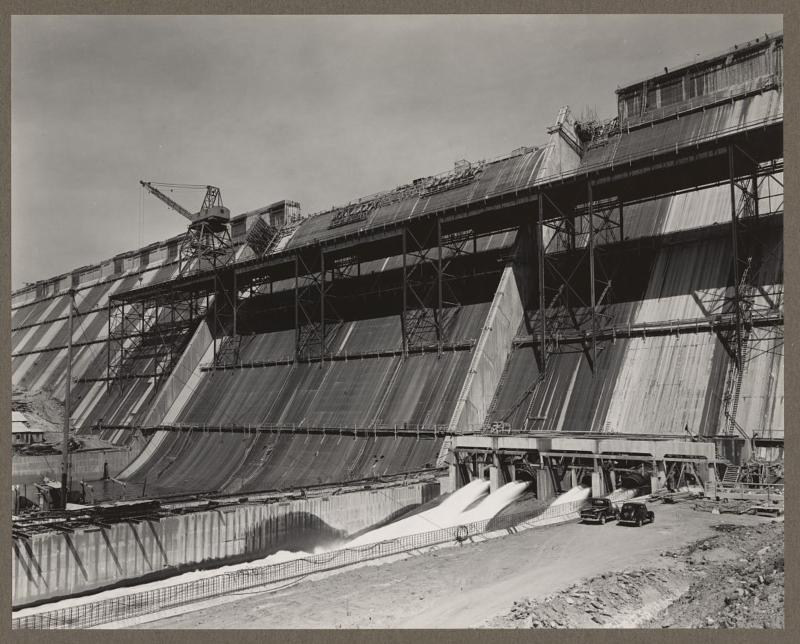 When people say “make america great again” they are probably remembering a grandparent who worked on something like this. My grandfather was a carpenter during WWII and assembled wooden aircraft hangars for the Air Force – he was proud until the day he died of how they could build an entire B-25 hangar in a day, and only had enough left over wood scraps for a small bonfire. When he spoke about the sense of unity and teamwork that his crew shared, his eyes would glow and he’d relax and start throwing back cup after cup of bitter black, boiling hot coffee.

The “make america great again” crowd are pursuing a real memory, but it’s not the memory they have been re-fed by the forces that control them. It’s the memory of the sense of purpose instilled in them by relentless wartime propaganda.

What made america great during that time was the totally militarized economy, resulting from three massive wars nearly back to back. One of the stories about WWII and the Manhattan Project that always struck me was how the CEO of Dupont told Leslie Groves, the general heading the Manhattan Project, “Dupont will provide you whatever assistance we can, gratis.” In other words, the capitalists helped boost the economy for the war effort by turning off the profit-valve for as long as it took. Teflon was invented for carrying uranium hexaflouride, which will apparently eat anything except Teflon; it worked out all right for Dupont.

You can tell that it was the wars, and not anything else, because between the wars there was economic collapse, and political uncertainty. What makes america great is when america saddles up and gets the steam up to go flatten and destroy someplace. That’s what gets america fired up.

But I don’t want to distract you from these beautiful photographs, which are part of american greatness. They’re all in the Library Of Congress – another great american institution – its gorgeous building was constructed in the early part of the great american industrialization, 1890, when Carnegie and Morgan and Mellon were transforming the country into monuments to their wealth. It is a great thing that america can afford to have such a collection of stuff. The Library of Congress has digitized these images and they’re all online.

Now let me tell you the mind-blowing part: those pictures above, I just grabbed them off a page at random. [here] Searching for “Farm Security” and “American Memory” gave back 280,000 such images. I pulled those masterpieces off the first page. It’s a huge collection and you can lose yourself searching around in it.

America isn’t building dams and power systems like that, anymore. Mostly, they’re trying to keep the old ones working, and to eke efficiency out of them where possible using advanced power-switching “smart grid” systems made in Germany and China. With, depending on who you believe, remote control by hackers in Russia. The big works, the dams, the steel mills – those have moved to where capitalists can take a bigger chunk of the action than they could in the US. And “foreigners stealing our jobs” will be the cry, but really the jobs were exported by the capitalists, because simply breaking the unions and dodging paying taxes wasn’t enough for them. Carnegie and Morgan and Frick got super-wealthy by gouging and abusing their workers – most of whom were immigrants who came, starving, to america to find food and work. They got work, all right, and their lives were shortened tremendously in the heat of 1200degree blast furnaces, no safety gear, and Pinkertons’ standing by to break their skulls if they complained and demanded a living wage. Now, the capitalists have moved the sweat-shops elsewhere; they’re making China “great”, now.

My friend Andrew Molitor writes a lot about images from the FSA [molitor] in his search for perfect negatives and images. If you’re interested in a sort of “theoretical mathematician’s take on composition” you might want to check out his writings.