A friend of mine asked me the other day about John McAfee’s threatened presidential run, “but he’s kind of opinionated, isn’t he?”

I don’t think “opinionated” is the right word. But I’m not sure what is.

When you start looking at what McAfee’s been up to, it’s a fascinating story of the relationship between wealth, the media, and drugs. If you haven’t noticed, the US’ drug policy is very different if you’re a poor black guy from if you’re a rich white guy. If you’re Heath Ledger or Cory Monteith, (the list goes on) then it’s suddenly it’s a tragedy, not just another junkie death, face-down, unconscious, strangling and not knowing it. If you’re rich (or you’re a media figure) we all become enablers of a sort: we disconnect Robert Downey’s fondness for cocaine from his excellent, twitchy, over the top, performances as Iron Man – or Ledger’s “method acting” craziness – as if the drugs are somehow not involved. I hope I’m not breaking any news here, but Jimi Hendrix’ guitar greatness had a certain amount to do with his drug use, too. 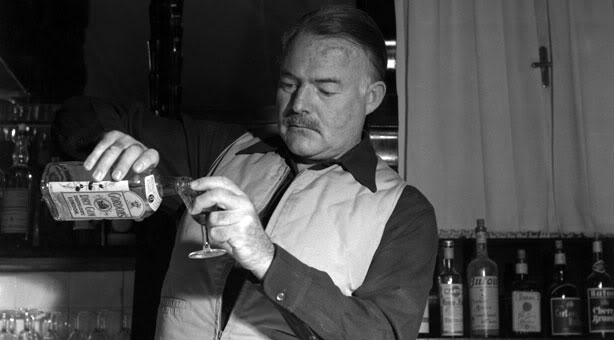 Behind all the genius-level performances brought on by drugs, there’s just the rest of the drug users. Some of them have great times, some of them break down, some of them die junkies’ deaths, and others just carry on, altering their states as they see fit, and go through life and whatever changes they experience. As a society, we are weirdly dishonest about drugs, allowing regulation (legality) to color our reaction to our own and other people’s drug use. Caffeine, tobacco, alcohol, are “normal” and we don’t tut-tut at someone who sneaks out of the workplace and has a triple espresso. In the 80s, ducking into the bathroom to snort a line was pretty common, and as I’ve mentioned elsewhere, political leaders have been variously tweeking or boozing for a very long time. [stderr] It seems as if it only matters when people are so impaired by their drug of choice that it makes them hard to work with. I would argue on technical grounds that Hitler was “hard to work with” when he was eyeball-poppingly pumped on pervitin and oxycodone. [stderr]

We should assume that, to some degree or another, we’ve all worked with or for people who are under the influence to some degree or another. I like to think I’m pretty open-minded: I know some of the speakers at conferences I’ve attended were variously flying on amphetamines, oxycodone, cocaine, alcohol, or caffeine. One guy I know had anxiety – stage fright – and used to chunk down an ativan (to go with the adderall he was already on!) before he’d start a class. Then he’d drink alcohol to bring himself back down: since it was all legal, it was OK, right? 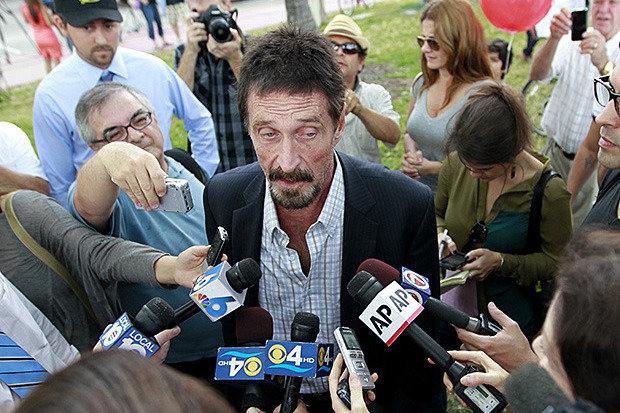 Anyhow, I was curious and started wondering what the hell McAfee is on. Because he’s like a weird energizer bunny sometimes, with big leaps of surreal trip-think like when he threatened to run for president, and offered to stop the “North Koreans” attacking Sony. [cso]

Apparently McAfee’s friend is a thing called: 1-phenyl-2-(1-pyrrolidinyl)-1-hexanone, street name “alpha-PHP” it sounds like it’s got some pretty interesting side-effects, urrr, I’m not even sure if “side-effect” is the word: it’s all effect. I’ve researched a bunch of this stuff for you, so the NSA won’t have it in your browsing history that you’re frequenting the places where it’s sold. By the way, if you’re a government user, do not go to the Erowid drug vault, because it’s on a lot of operation center audit watch-lists. 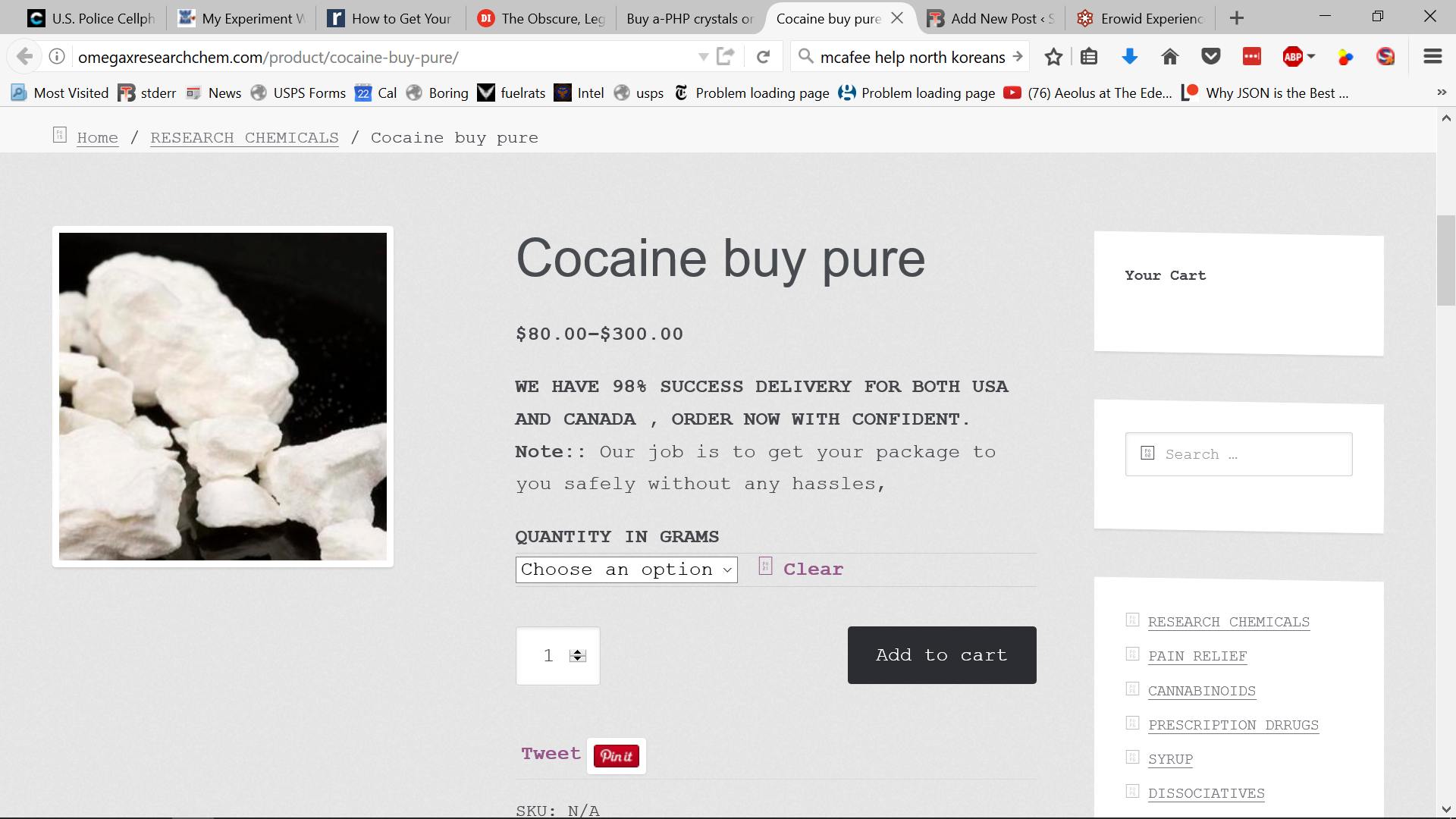 You can buy bags of alpha-PHP shipped right to you from Chinese “research chemical” companies. [probably don’t follow this: link] Apparently, McAfee travels around with bags of the stuff in his luggage. The Erowid psychoactive vault has a lot of good first-person experience reports on various substances – and some of the reports make me wonder why anyone would try some of this stuff.

First time ordered 1 gram about 3 months ago. It was in powder form. Was snorting it for about 3 weeks (very small quantities), until gone. Good initial rush, not so on comedown. Had to either redose, or smoke cannabis to kill the bad effects. By the time I finished it, I could feel mild pain in my kidneys, and when combined with weed, started getting panic attacks (thinking I’m going through a heart attack) which was pretty unpleasant. So I decided not to reorder.

After about a month, I changed my mind, and decided to give it another try and ordered a larger quantity from China, in crystal form.

Was snorting it daily for about 2 weeks. First, although being extremely productive at work and home. I was getting more and more anxious, irritable, almost psychotic. This was solved by some mental tricks (by muting amygdalia and letting grey matter to take decisions, in other words once you get irritated, don’t react right away, think what made you feel bad, and then think if you usually get mad in this situation, or blame it on drugs, or distract yourself by concentrating on your pulse or deep breath, or just force yourself to ignore the cause of your irritation.)

At the same time I started losing weight like crazy. Lost, or fried, about 10 kilos of fat and muscles (more fat) in those 2 weeks, looking like a fitness trainer (which is cool). My guess is that, while snorting, a-PHP would irritate/inflamate my thyroid (I would feel it getting bigger while trying to swallow) forcing it to produce more hormones accelerating metabolism. Also could not sleep at night, unless killed the effects of a-php with weed. Same for food: was stimulating appetite with weed, otherwise wasn’t hungry. [erowid] 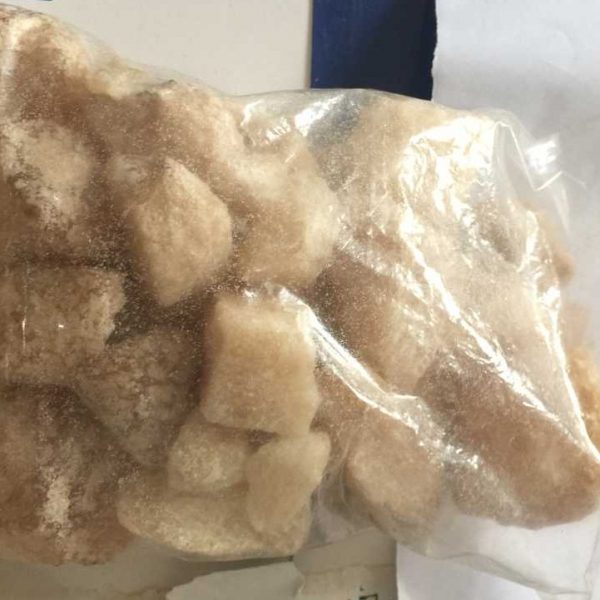 I don’t want to be a downer but sharp pains in your kidneys are probably not a great sign. There was another usage report that was genuinely scary: the guy freebased a large dose and his heart rate pegged at about 120bpm for 4 hours. Call me old and increasingly conservative, but that’s what I’d call an “adverse reaction” not “fun.” These drugs are whacking the crap out of your brain’s neurotransmitter levels, and that’s putting a load on everything that’s controlled by your nervous system. Accounts that include symptoms of depression afterwards scare me: you’re jerking your dopamine levels around, of course you’re going to experience cognitive emotional effects. 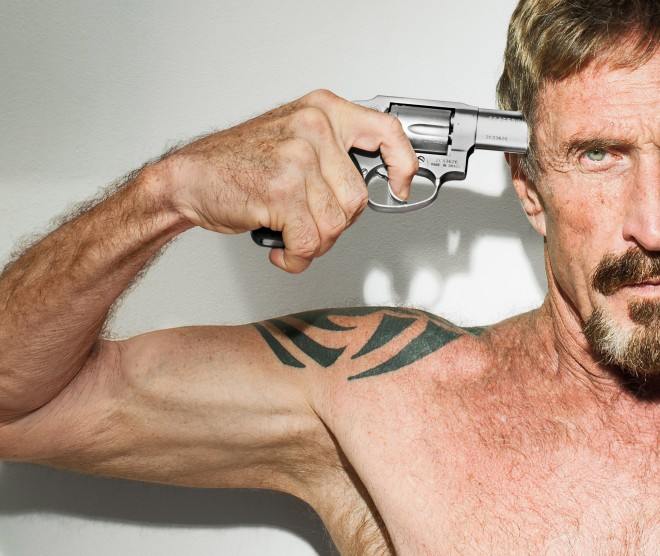 What are the long-term effects of this stuff? Consistently, the Erowid reports on alpha-PHP say that there’s a strong temptation to re-dose. One of the reports I read described the user having to figure out what the shipping time from China was so that they could ensure a constant steady supply.

Anyone who has experience tripping is probably familiar with “trip think” – the impetous, sudden, vivid ideas you have that flash into your mind. Sometimes the ideas are great, other times they’re indistinguishable from “schizophrenia.” For that matter, how is “high as a kite on cocaine” different from “narcissistic personality disorder” and how do we tell them apart? What if the patient is Adolph Hitler, or Donald Trump? Tripthink is thinking: stoned ideas are ideas:

A former member of his inner circle forwarded me a photo of a packaging label that one of McAfee’s friends took in the course of a four-day binge earlier this month in New York City. (At the end of the binge, McAfee appeared at a shareholders’ meeting for MGT Capital Investments, the tech firm he now runs. At the meeting, MGT shareholders approved the acquisition of two companies that McAfee owns and voted to change the company’s name to “John McAfee Global Technologies”; soon after that, the New York Stock Exchange nixed the acquisitions, and the SEC launched an investigation.) [nymag]

If I am reading that right, McAfee wanted to have his publicly-traded company buy his dope dealer, so he could have all the dope. What is the difference between tripthink like that and insanity? Especially since we have been learning that a lot of what psychologists classify as various mental disorders have to do with neurotransmitter levels.

McAfee described some of his intensely vivid paranoid fantasies to Davis during his 2012 visit. McAfee told him that he’d been walking along a beach one night when the Gang Suppression Unit, an elite Belizean police squad, began pursuing him in golf carts. He hid on a balcony, but the officers followed and silently surrounded him in the darkness. “Two of them were less than three feet away,” McAfee told Davis. “They stood unmoving. No one said a word all night long. They just surround you and stand still. Think about it. It’s freaky shit, sir.” Finally, McAfee claimed, the cops backed away and melted into the night. [nymag]

It’s interesting to me that the New Yorker article uses the psychological term “paranoid”, which is a diagnosis of a disorder (Paranoid Personality Disorder, per DSM-5) – the New Yorker is implicitly confused about whether McAfee is disordered or not. It seems reasonably to me to suppose that McAfee is, literally, experiencing what a ‘natural’ paranoid schizophrenic might, especially since ‘natural’ paranoid schizophrenia appears to be a matter of neurotransmitter imbalances. Is McAfee experiencing recreational insanity?

Three years later, Men’s Journal writer Stephen Rodrick visited McAfee at his home in Tennessee, where McAfee dragged him outside to show him proof that he was being shadowed by hit men from a Mexican cartel. “All they eat is cream cheese,” McAfee told him, scanning the leaf litter in the woods. “I find cream cheese packets everywhere. If there’s cream cheese, I know the cartel has been here.” [nymag]

“Rich people are eccentric; poor people are crazy.” The road to bat country is littered with cream cheese packets, discarded $20 bills, and everyone there is under surveillance.

I was teaching a class for SANS in New Orleans  in 2002, right after I had had emergency oral surgery. The pain was intense so I took one of the oxycodone the doctor had prescribed me. Suddenly, I had no short-term memory. I still remembered my material just fine but if I was side-tracked I would lose the thread. I explained the situation and everyone was pretty sympathetic; if I got lost I’d just say, “argh, I just got lost” and someone would remind me what I was saying, and off I’d go. That was not my favorite drug experience but I got good ratings.

“The Prophet of Paranoia” – Mens Journal on John McAfee [link]

By the way, the link I exposed above, the Chinese “research chemical” company: they sell powdered fentanyl. That’s incredibly strong stuff, and it’s killing a lot of people (because you can buy it in powered form from China with a 98% success rate, instead of having to buy heroin from your neighborhood drug dealer)

I Gargle in Vomit So You Don’t Have To » « Monday Meslier: 2 – What is Theology?