I wrote about how Hitler and many of his upper echelon leaders were smashed on opiates or amphetamines, or both. When I finished that summary, I mentally bookmarked to look up whatever I could find about allied leaders’ drug use during WWII; Winston Churchill, of course, was a notable drinker. 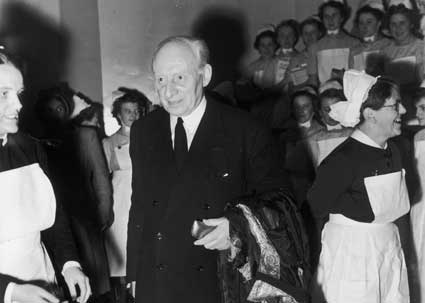 Suddenly a lot more became clear about Churchill: his ups and downs, his all-nighters, his drinking and showing no effect. He was moody throughout his life, and would go on “manic” binges and write copiously, or would sit inert and drink. By 1940, Churchill’s physician, Lord Moran, was giving him amphetamines to keep him up, and barbituates to help him sleep. One imagines a sort of meat-puppet being jerked onto its feet, spring-loaded with a bit of benzedrine, then knocked down when the house-lights are off, with the assistance of phenobarbitol. Up, down, up, down, up, down.

It’s inappropriate and probably outright dangerous to attempt retro-historical diagnosis, but Churchill himself wrote often of his “black dog” – depression – and often avoided easy opportunities for suicide for fear he might take them.*  Churchill later suffered from a series of strokes, which led to his resigning from public office, mild dementia and eventual death. His first strokes were concealed, though Churchill quipped, “The dagger struck but this time it was not plunged in to the hilt.”** Smoking, drinking, uppers, downers, it’s hard to point a finger and say what killed the bulldog. His was not a low-stress life.

It sounds like he was probably as out of his head as Hitler, around the same time. Later, after the war, when he began to decline, he was propped up with more amphetamines.

From 1940 onwards, Moran prescribed “reds” to promote sleep. “Reds” were quinalbarbitone (Seconal 100mg) which were favored hypnotics in those days. […] When Churchill was troubled with muzzy feelings in the head after his first major stroke in 1953, Moran prescribed a pill that Churchill called “A Moran” and from which he claimed great benefit. Moran gave his patient a test dosage of this pill a few days before Churchill’s important speech at the Conservative Party Conference at Margate on 10 October 1953.*** Although there is no clear record in Moran’s medical notes, his use of a preliminary test dose and and Churchill’s comments on the pill’s effects indicate that a “Moran” would have contained amphetamine.

Before his death, he apparently became a fairly unpredictable handful of a patient, the result of years of alcohol, drugs, and strokes. He was greatly diminished, and it’s hard to find photographs of him from that period; I think most of the world would rather remember him in his prime. Or perhaps his late prime. Or even his later-than-late prime. He was atop the tiger for a lot longer than most humans ever manage.

My feelings about Churchill are complicated. As an unashamed imperialist, it’s hard to approve of his actions, and as an avid reader of military history and strategy it’s impossible to avoid the fact that he was responsible for a lot of suffering from the consequences of his bad ideas. The forcing of the Dardanelles and the Gallipoli campaign was one of his ideas; the allied landings and assault up through Italy in WWII was another. He was as fond as big strategic games-play as was Hitler, and – while he never came up with an idea as stupid as invading Russia in the late sumer – he was emphatically not the kind of commander who should have been prosecuting a war like WWII. Most of them weren’t, though.

What I find endlessly amazing is how many people love and adulate their leaders, as many did Churchill. They cheer and they march and they die for some puffed-up drunken drug-addled popinjay, or a vicious racist goon. And after they’re dead and buried, their legacies, bad judgement, murderous pride, poor negotiation – get swept under the carpet and they are hailed as saviors or great leaders. I just don’t get it. These great leaders are the same ones who ‘negotiated’ their countries into corners they couldn’t get out of without bloodshed, then fought to the last drops of someone else’s blood. Yet humans continue to elevate them, instead of locking them away somewhere with a lot of beer and board-games, to endlessly measure the size of their hands against their fellows.

The Telegraph: “Churchill’s drinking was one thing, but what about the drugs?”

The Express on: “The big secret of Churchill’s stroke cover-up” (imdb)

Theconversation.com: “Churchill and his ‘black dog’ of greatness”

(* Could have been a bit of Churchillian drama.)

(** He may have been a horrible person, but damn could he do the “bon mot”)

**BMJ, Volume 310 “Lord Moran’s Prescriptions for Churchill”  – This letter is interesting because its author points out that Moran’s use of asprin prefigured today’s use of asprin as a blood-thinner for patients suffering from atherosclerosis; it’s possible that Moran’s treatments prolonged Churchill’s life.