I was fortunate to grow up almost completely irreligious; I’ve never felt a need to replace some “lost” faith or to seek my meaning in the gift of the gods. Reading a lot of history as a kid teaches you that the gods elevate and destroy everyone more or less randomly. Epicurus was right – if they exist, their affairs are complex and elevated enough that they’re more or less irrelevant to us.

My early encounters with philosophy were not good. After some teenage challenges like, “Oh, yeah, well prove to me that you exist!” schoolyard epistemology convinced me it was a waste of time, so I spent my life doing engineering tasks like hooking computers between networks and building systems that kept hackers out – practical stuff that didn’t need philosophizing in order to work. I considered myself practical, and I still do. I considered religion to be interesting as history (where it hasn’t disempowered itself out of the political sphere) and I still do. 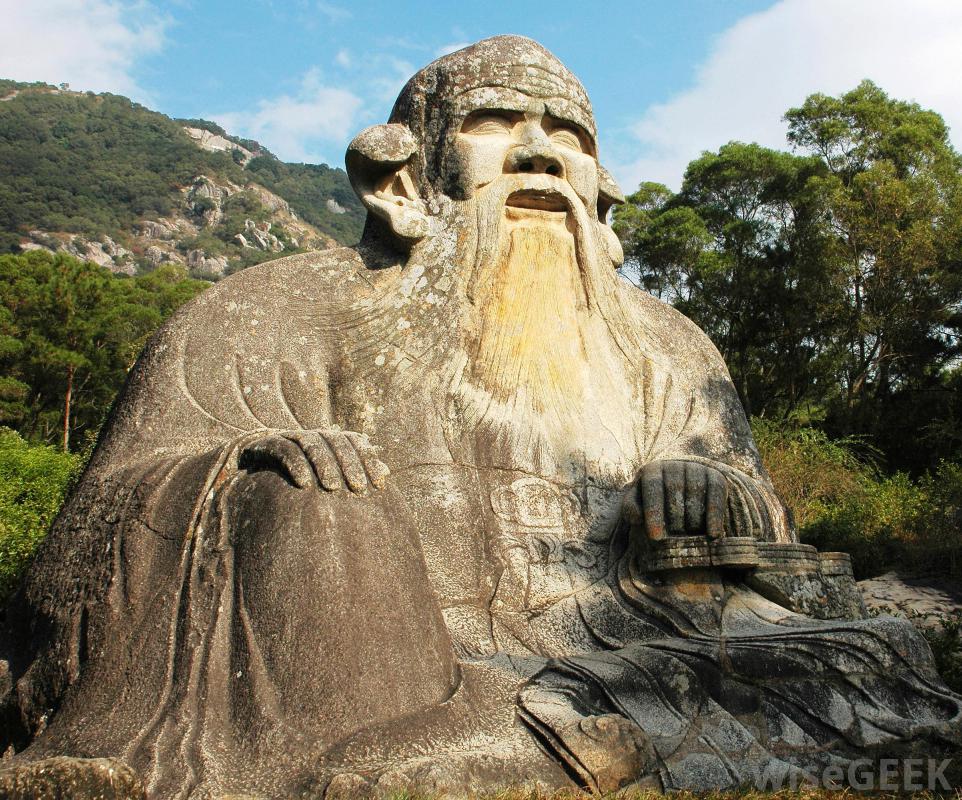 Statue of Lao Tze. The big ears show he’s extra super smart. Why do people have to goddify everything?

If you want to look at religions as historical artifacts and political tools, you realize that they’re finely graded – some are absurdly authoritarian (like calvinist protestant christianity) and others are squishy; the less authoritarian ones are interestingly intangible, like the warrior’s Zen, which I later learned had been mixed, unmixed, remixed, and Americanized by hippies and Alan Watts and DT Suzuki into something that would be unrecognizable to one of its early proponents. Some of these religions are so tenuously religious that one can plausibly say they aren’t religions at all – I’ve met buddhists who believe Karma is non-metaphysical, for example, and I’ve found that the best path is to avoid confrontation.

I learned to avoid confrontation by watching Bruce Lee movies. “The art of fighting without fighting” as expressed in Enter The Dragon, or Trent The Uncatchable’s Trick are a good way to deal with the “is it a religion?” question. It’s especially good with Taoism, because Taoism is sort of like a religion, and a dessert topping. Or a philosophy and a floor wax. Taoists don’t tend to be dogmatic about some things. I first flipped through Tao Te Ching (“A Book About The Way”) back in the 70s, in one of those stores that sold bead curtains, india cotton shirts, and patchouli incense. So, here’s how I confront the question of “is it a religion?” Some religions, it’s easy: it’s fully of goddy stuff and divine avatars that walk around smiting eachother. (Epicurus was pretty much right: those gods seldom bother stooping to smack down humans, except for that arch asshole Yahweh) but there are also sort of philosophy/religions that aren’t completely about imaginary avatars and what they expect from humans. To me, it boils down to authoritarianism: if your precepts are true because some really smart guy said them, you may be practicing religion. I want to see that your precepts are true for reasons. In other words, I want a constructive system that doesn’t depend entirely on a bunch of authoritarian pronouncements; I don’t care if the pronouncements come from a smoking shrubbery or an old guy with a benign smile. I want to be convinced.

Authoritarianism is key to my approach to religions in another way, too – I generally contextualize religion as a technique for political control. So, if I see that a religion has a whole lot of “render unto Caesar” or “be a good servant to the powerful” I’m going to be inclined to reject it because of the authoritarian argument. I was fascinated when I read Confucius, just after Nietzsche, and it seemed as though the great bloviator was right: it was about how to be a good slave. Conformity, conformity, conformity – everywhere you look. In retrospect my passing interest (and lingering appreciation for) Zen is probably because it’s nonconformist and and generally not very authoritarian.

So I come to The Tao. There are assertions in the Tao Te Ching, and surrounding it – unsupported assertions. Assertion: it was written by a really smart guy one day. Assertion: there is a “balance” to life and it’s all very nebulous and it does not appear to be a real ‘thing’ so much as it’s an emergent property of all the things. Assertion: we know wisdom when we encounter it. I’ve met people who interpret The Tao as everything ranging from Dharma/Karma to the Universe or conservation laws. I’m willing to keep it at the newtonian action/reaction level, which is pretty Taoist, if you think about it.

A copy of the Tao Te Ching has held a spot on top of my toilet tank for at least 12 years. Sometimes, I pick it up, and open it to a page at random, and read, and think. That’s the thing – the Tao Te Ching is not written as a great big mass of “thou shalt” and “this is how things are” nor is it complex – it sometimes helps me focus my thoughts, or distract myself, depending on what I need at the moment. I’m pretty sure that, at this point, I could read the book in tea-leaves; I’ve come to know it that well. And I’d say it stacks up well against things like the christian bible.  Very well, indeed – though it depends a lot on the translation.

Ursula Le Guin, who wrote the Earthsea books, has been a long-time scholar of the Tao Te Ching, and has produced her own translation of it. The language is restrained and elegant and beautiful – it’s a more literate version than some of the older translations that are trying to render the text with the flavor of court Chinese. It’s on my list of recommended books[list]

What’s interesting to me about the book is that it doesn’t really say “this is what you should do” but rather “this is how things are.”  I find it soothing and kind of humbling to realize that often, “this is how things are” is the same more or less as they were several thousand years ago. Are our problems this timeless, or is the author of the book simply playing on the commonality of human experience? There are occasionally references to “The Master” or “The Wise Man” but not as a statement of dominance; the references are more like a suggestion; it’s what I mean when I say that Le Guin’s translation is restrained and elegant – it’s decidedly un-authoritarian.

There have probably been books written about every chapter, and I wish I had a spare lifetime to do so. Sometimes, I find myself throwing up my hands and laughing because it does seem that this 2,000+ year-old book was written yesterday. Let me give you an example:

People hold life cheap.
The rich make it too costly,
that’s why people hold it cheap.

But those who don’t live for the sake of living
are worth more than the wealth-seekers.

See how subtle Lao Tze Is? Compare that with Matthew 19:24 and you’ll maybe see what I mean about how the Tao Te Ching doesn’t just whack you with a bunch of assertions about how you should behave.

I can picture Epicurus reading this and nodding along:

Chapter 74: The Lord of Slaughter
When normal, decent people, don’t fear death,
how can you use death to frighten them?
Even when they have a normal fear of death,
who of us dare take and kill the one who doesn’t?
When people are normal and decent and death-fearing
there is always an executioner.
To take the place of that executioner
is to take the place of the great carpenter.
People who cut the great carpenter’s wood
seldom get off with their hands unhurt.

Chapter 11: The Uses of Not
Thirty spokes
meet in the hub.
Where the wheel isn’t is where it’s useful.

Hollowed out,
clay makes a pot.
Where the pot’s not
is where it’s useful.

Cut doors and windows
to make a room.
Where the door isn’t,
there’s room for you.

So the profit in what is
is in the use of what isn’t.

Of course, human love of mystery, complexity, and bullshit have erected vast edifices around Taoism. There are various saints and spirits and avatars – I suspect Lao Tze would have had something arch and clever to say about that, too. I find it sad; there’s so much to think about in the world, so much complexity and silliness in reality, that it makes little sense to seek out additional bullshit – but that seems to be how humans have to do things.

I feel like we are presented with a set of puzzles, much like the kōans that some Zen schools would pose their students, that they could think about them and maybe understand things a bit better. If you take the book that defines Taoism, the Tao Te Ching – and leave behind all the superstructure of religion that accumulated around it – you have a puckish and provocative little book.

Trent the Uncatchable: The best way to never lose a fight is to … run away.

To clarify: here I am using “Authoritarian” to mean “based on authority”  i.e.: It’s right because our smart guy says so. It’s true because otherwise you get smited. “Do what I say,” shall be the whole of the law.

Back in the early days of youtube, before it was Google, there was a weird clip that was someone reading the Tao Te Ching with a text to speech robot. Its inflections were very weird and it somehow was very soothing to me; I used to fall asleep listening to it – this was about 1998 or so. If any of you recall it, and/or what it was called, I’ve managed to lose track of it and it’s pretty much impossible to find a version of the Tao Te Ching by searching the internet for the title.

If we know what wisdom is, why are we not all wise?

This posting may not have worked. I tried to write it in a circle. That’s a problem since I already write in circles. The puppy chases its tail.

Creep While You Can! » « “Walking Back The Cat”