Weed never did much for me. The first time I smoked it, I was watching Cosby, Himself and laughed so hard I think I separated a rib. Subsequent times, I just immediately head for the couch and go to sleep. If I need to sleep, I’ll just read a book on ethics.

Anyhow, since today is weed day I thought I’d share a picture of an invention a then-friend and I cooked up, back in 1999: the Nobel Peace Pipe. After our experience watching Cosby, Himself I was complaining that the smoke was hot and burned my throat. Then, I said to myself, “Self? You know nitrous oxide is really really cold when it comes out of a whip-it. What if you used nitrous to cool the smoke?” Then, then-friend named it the Nobel Peace Pipe, and it took me a couple days to source all the parts and assemble the first prototype.

It worked unbelievably well, since the usual process is to inhale the smoke, and hold it deep in your lungs. Doing that with a lungful of mixed nitrous oxide and smoke messes you up incredibly fast. Best of all, the nitrous oxide’s analgesic properties make you less likely to feel burned or dried out by the smoke, and the smoke is cooler (but way more dry). We had one friend who was notorious for taking massive hits, so he was our beta-tester – yes, we tested on human subjects – the system was a resounding success.

I probably don’t need to explain the process, but allegedly when smoking weed in a bong, one pulls a bunch of smoke into the bong body then opens a “valve” (usually a hole with a thumb held over it) that lets you “clear” the pipe by pulling air in the hole and smoke into the lungs. With the Nobel Peace Pipe, instead of clearing the pipe with air, you gently squeeze the lever on the whipped cream maker and release a lungful of nitrous into the pipe body, then suck a load of nitrousy weed-smoke into your lungs. Then, you fall over. 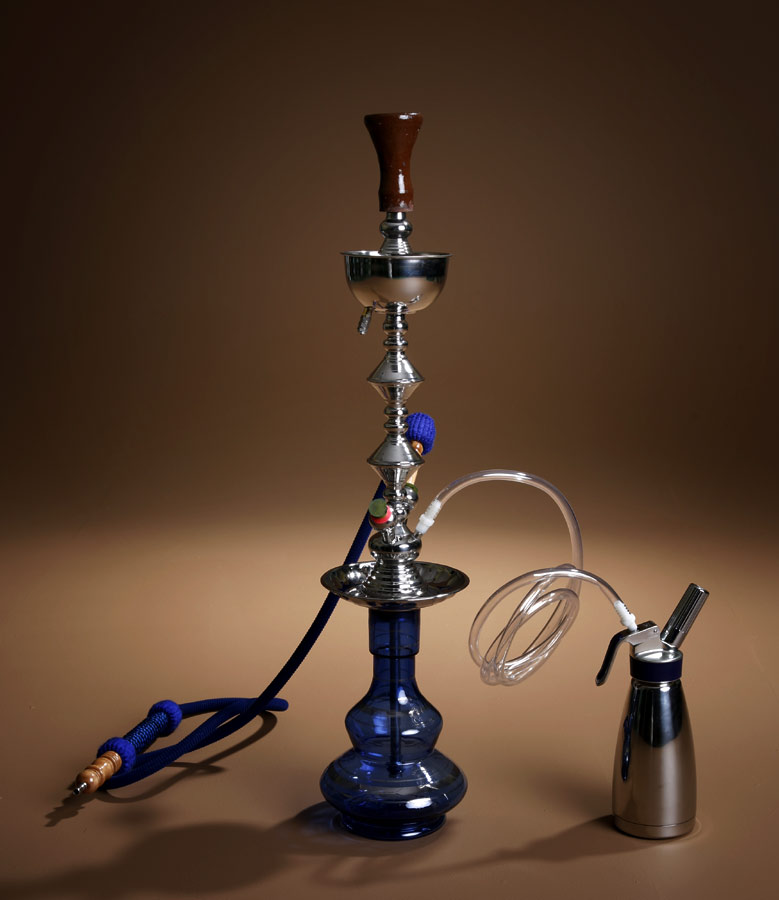 The pipe above was made for a friend who likes hookas and has access to an effectively unlimited amount of weed. It was particularly easy to make since hookas have a one-way air inlet valve on the pipe body, you just find a compatible hose-bib, some hose, and a whipped cream dispenser. The hose-bib screws on to the threaded outlet where the cream would come out, and onto the one-way valve on the pipe.  With a more typical bong, like some of the lovely modern multi-stage lucite water pipes, you would enlarge the thumb-hole and add a grommet (to seal it) then run the hose from the cream dispenser down below the water level in the pipe. Or you could use a one-way hose fitting and put the inlet hose pretty much anywhere in the pipe body.

There are several advantages to using the cream dispenser:

I forget what happened to Pipe #1. Since then I’ve made a few others; I’m up to #7. After #2 I started making little brass number and date plaques that read “Nobel Peace Pipe” on them. Because if you’re not proud of your work, you shouldn’t do it – and if you’re proud of it, you should sign it.

Be careful when working with PVC, nitrous oxide, and fire in the same vicinity, as they react sharply enough that you can propel rockets with the reaction. Nitrous oxide can be dangerous in lots of ways, so do not take this as an endorsement or encouragement to engage in illegal activities. Void where prohibited. Contents may have settled during HTML encoding.

I am not presently taking orders.

This method is wasteful of both weed and nitrous (FYI) it’s more of a “life of the party” kind of toy and probably not best for daily use.

He’s Got A Point! » « Uncomfortable With Flesh