Talleyrand, Napoleon Bonaparte’s chief diplomat, could have taught Trump’s team of motley fools a thing or two thousand. One of his famous observations: “Never interrupt your opponent when they are making a mistake.” Sun Tzu would have nodded. 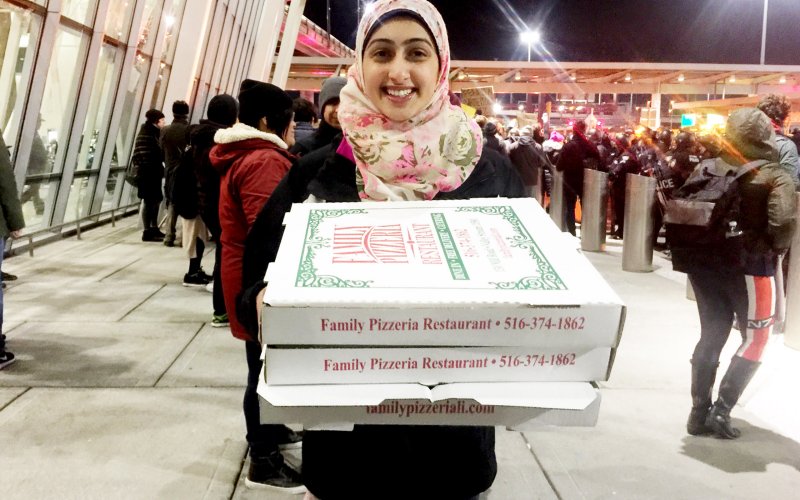 Some other strategic genius in New York responded to the Trump administration’s mistake by making their mistake more obvious. In Talleyrand’s terms, this would be: “Shine a spotlight on your opponent when they are making a mistake.”  And perhaps make sure the press is there with lots of cameras.

An (initially) unknown person called a pizzeria and ordered a whole lot of pizzas delivered to hungry and pissed off people at JFK airport.[1]

Behind barricades and police in riot gear, protesters took it upon themselves to feed their comrades. At 10pm, there were more pizza boxes than signs littering the floor.

It was an 18 year-old strategic genius who ordered 30 pizzas.

In the grand scheme of things, this will not affect much. It serves more to illustrate how poor a strategy random acts of hatred are, and how easily they can be turned to make the hater look bad. More to the point, the random hatred brought an as-yet un-moved strategic genius in off the bench, on the other side.

The counterinsurgency theorists write about “hearts and minds” but they do not understand that the way to win hearts and minds is by being mindful and not threatening. The “hearts and minds” (really: “clear and hold”) model amounts to “how much do we have to abuse someone to make them love us?” Now that Trump is in power, I’m happy to see that his administration are making mistakes as fast as they can.

Adam Curtis’ brilliant and insightful blog posting “How to kill a rational peasant” absolutely skewers the poor strategy of counterinsurgency proponents. It’s very worth reading and also obliquely debunks the idea that David Petraeus was some genius who devised the US military’s counter-insurgency manual: he cribbed it from a French officer named David Galula who helped mastermind France’s defeats in Algeria and Vietnam using the strategies Petraeus eventually dusted off and presented as new.

Also, if I may: much respect to Fatimah’s family (including her father) following her lead enthusiastically. I guess not all muslims are terrorists, and not all women who wear hijab are helpless submissives of male authority figures. Fatimah’s play is awesome across the line: the best chess moves threaten multiple of your opponents’ pieces at once.