From Gene Wolf’s “The Shadow of The Torturer”:

I put on the cloak… the hue fuligin, which is darker than black, admirably erases all folds, bunchings and gatherings so far as the eye is concerned, showing only a featureless dark. 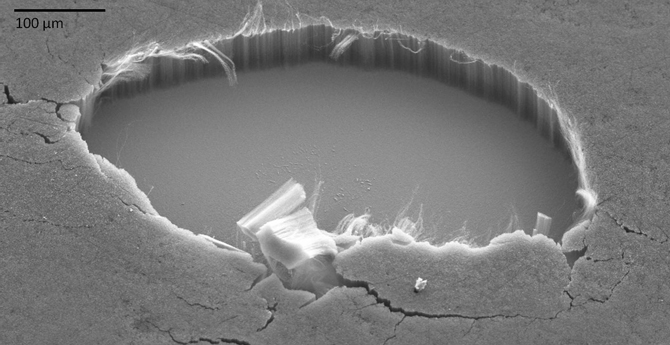 This is pretty cool stuff: what do you get when you take carbon nanotubes and align them into a material? You get material that absorbs more than 99% of the visible light that falls on it.

If I am reading this correctly: this stuff is going to look really black.

“The reflectance tests showed that our team had extended by 50 times the range of the material’s absorption capabilities. Though other researchers are reporting near-perfect absorption levels mainly in the ultraviolet and visible, our material is darn near perfect across multiple wavelength bands, from the ultraviolet to the far infrared”

The nanotech-based coating is a thin layer of multi-walled carbon nanotubes, tiny hollow tubes made of pure carbon about 10,000 times thinner than a strand of human hair. They are positioned vertically on various substrate materials much like a shag rug. The team has grown the nanotubes on silicon, silicon nitride, titanium, and stainless steel, materials commonly used in space-based scientific instruments. (To grow carbon nanotubes, Goddard technologist Stephanie Getty applies a catalyst layer of iron to an underlayer on silicon, titanium, and other materials. She then heats the material in an oven to about 1,382 degrees Fahrenheit. While heating, the material is bathed in carbon-containing feedstock gas.)

I’m constantly amazed at what’s coming up with materials science. Back in 1999, or thereabouts, I was at a USENIX conference and one of the other speakers was a failure analyst from NASA who had been involved in post-forensics of the Challenger disaster. One of the results of that was a great deal of additional testing, including firing blocks of ice at the leading-edge components of the shuttles’ wings. He showed some really cool footage of ice-blocks fired from an air cannon hitting the carbon/carbon wing components. The ice sort of liquified as it hit; pretty cool. The wing components were apparently about $250,000 apiece so they weren’t able to destroy very many of them — and, of course, destroying them was not the objective. When he handed the wing-edge around for us to touch, it was amazing how light the material was. It had the surface texture of glass or tile, but weighed about as much as if it was made of dry sponge. While I handled it, I felt like I understood a bit about what they mean by “rocket science” – it was a man-made material designed to withstand mach 25 re-entry. It’s not just “carbon fiber” it’s “carbon deposited in a mesh of synthetic diamond.”

Monday Meslier: 117 – Opinion of a Celebrated Theologian » « Hijinks on the High Seas