I’m going to begin today’s sermon with a transcript from a podcast I recently heard. It’s David Wood, speaking at Politics and Prose on “What Have We Done: The Moral Injury of Our Longest Wars.” Wood’s view is that wars can cause “Moral Injury” – a sort of post-traumatic stress disorder to our sense of right and wrong. The bit that stuck in my mind, which I went back and replayed and bookmarked, was an example that he gave – an example that is very typical of the experiences of many soldiers:

“I was telling the story about Nick Rudolph. So Nick’s a really nice marine, comes with a pretty intact sense of moral values. Gets in a firefight – a bad firefight that went on for hours and hours and hours and at one point the taliban were holed up in a farm compound surrounded by an adobe wall, and they were firing at the marines who were advancing trying to flush out the bad guys. And at one point, Nick sees someone coming around the corner of the building, shooting at him and his marines with a semiautomatic rifle, gets that person in his sights, and realizes that it’s a 12-year-old kid, and shoots him dead.

Here’s the problem: it’s maybe a “perfectly legal and tactically correct thing” to shoot some kid who tried to shoot you, but not when you’re part of an occupying military power.

Self-defense only applies when you are unquestionably under attack, which means you’ve got to be someplace you belong or have been invited to be. In the case of Afghanistan, knocking over one government and replacing it with your own, which then tries to dis-invite you (but you ignore) does not make you a guest resident. Going out on armed patrols into “enemy held territory” is turning things on its head: the armed patrol is an occupation force invading the places where people live and have lived for centuries. If they shoot at you, you are not morally OK if you shoot back – they’re trying to defend themselves against you and the patrol is doubling down on its aggression not defending itself.

Basically, the situation is this: imagine a bunch of criminals are robbing a bank. One of the customers in the store has a gun and decides to take a chance, pulls the gun, and shoots one of the criminals, who return a hail of fire obliterating the customers, tellers, and most of the bank’s lobby. We would probably say that the customer who shot the criminal was stupid, but that the criminals were the wrong-doers in the scenario. That’s pretty close to the scenario of a military occupation, except that in terms of warfare, we’d find the first customers’ actions completely acceptable (though unwise) if they were in uniform. 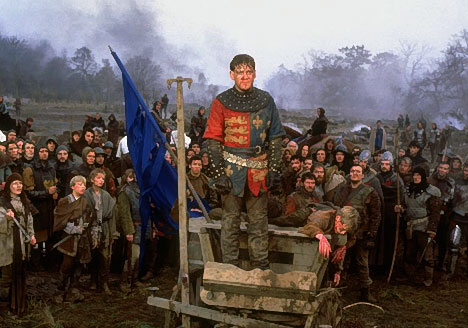 Now that I have led you deep into hostile territory, you’ve got to fight your way out. Psych!

Why do we privilege war so much? If we contextualize it as any other criminal behavior, a lot of it makes sense: people show up and murder uninvolved people, then blame them for getting murdered.

There are many philosophers that are thinking about the morality of warfare, and – amazingly for philosophers – there seems to be pretty solid agreement that wars of aggression are immoral. After that, it all falls to pieces. Many seem to think (as I do!) that pre-emptive wars, as they are fought, are immoral – they’re actually wars of aggression attempting to gain military advantage of surprise while claiming the moral high ground. But the morality of defensive war is also challenged by some philosophers. There are interesting and complicated questions that cut to the heart of nationalism: if a nation has a right to defend itself (since it represents the will of some percentage of its people) who is the right-holder of the national defensive right? In the case of the patrol in Afghanistan, they’d say they were there representing the Afghan government and that the government had, in effect, given them permission to go into harm’s way – and permission to shoot their way back out.

It’s necessary to expand rights to nation-size in order to reason like states do, so that an entire state can make war on an entire state. This, of course, is extremely sketchy reasoning – if a state is made up of individuals, the actions of the individuals are where the moral questions arise. So if country A attacks country B, we can say country A is engaged in a war of aggression and that country B’s military are within their rights to kill or harm country A’s military. But is that correct? Let’s suppose that Supply Sergeant J, from Country A, is killed by artillery fire from Country B’s attempt to defend itself from Country A’s XIX Armored Division. Supply Sergeant J was responsible for making sure the XIX Armored Division’s vehicles had their oil changed regularly – is Sergeant J’s nominal contribution to Country A’s war effort sufficient to justify killing them for changing the oil? We can probably excuse some anti-tank gunner who fires a missile at one of the tanks of the XIX Armored Division, as it roars across Country B’s fields. Can we excuse the tank commander for returning fire if they survive the missile? After all, their tank was attacked and have a right to self-defense. Actually, they don’t.

Suppose Country A now occupies Country B, and Country B’s heroic resistance fighters place a bomb in the mess hall of the evil XIX Armored Division. The soldiers who die and are maimed in the explosion are probably members of the victorious XIX Armored Division that sowed death and destruction across Country B. But there will also be crew-members that are new recruits – who haven’t even seen battle, who never do: they were killed simply for being there. National-level warfare, as opposed to common murder, collectivizes guilt and escalates violence to the point where uninvolved people who are practically civilians are “legitimate” military targets.

“The most profound objection to the traditional conception of national self-defense is that it permits, and often mandates, the mass wastage of individual rights in order to support the formal rights and status of political entities.” – David Rodin*

David Rodin gives a fascinating example of a state-versus-state conflict in the form of Kraft Foods versus Cadbury. He describes the different corporate cultures of the companies, the different finances and worker benefits, the different management styles and product sets: Cadbury was founded by Quakers and was intended to be a company embodying the Quaker values of hard work, peace, dignity, and equality. Kraft is a giant conglomerate that constantly buys other companies and sheds them after squeezing out operational expenses and profits. So, Rodin asks, “why did it never occur to anyone that Cadbury should have been defended against Kraft’s takeover bid by force of arms?” When we look at that situation, we immediately begin to load in other considerations, such as that the employees of a company don’t have the same sort of vested ownership as citizens of a country, that they don’t live in the factory, that Kraft’s takeover was nonviolent so that resistance would be a disproportionate response, etc. Yet, the US marines in Afghanistan had less vested interest in what was happening there than the Cadbury or Kraft workers did in their corporations’ battles.

When I think of these things, I simply wind up puzzled. I think it’s obvious that war is a crime, period. Self-defense makes sense in personal context where some individual is trying to hurt another individual and they act to prevent it, but we need to stop accepting the idea governments push: that a “people” make war on a “people” – it’s suspiciously like “collective punishment” which is generally recognized as a moral wrong not a right.

Governments hack our emotions – especially those of young men – and place them into dangerous situations where their only survival option is to kill other people. It’s a trick that governments play, and they play it deliberately: people are most dangerous when you convince them that someone wants to hurt their friends, so take a group, train them together so they can establish friendships, and drop them somewhere where their loyalty to their friends sublimes with their perception of the state and it’s “us versus them.” Every aspect of the military indocrination I observed one hot summer at Ft. Dix, New Jersey (D-5-3, Class of July 1983) encourages small group cohesion and group identity. Once you’ve built an armed “band of brothers” they’ll shoot back if they’re shot at, and the rest is simply a question of positioning the pieces on the board and dusting it lightly with propaganda. Military training regimes are planned around this, and therefore are deliberately and knowingly wrong because they are intended to produce dangerous individuals out of otherwise decent well-meaning human beings. Indeed, they weaponize the “decent well-meaning” part into making them killers: they’re decent to their band of brothers, they mean well for their band of brothers.

If we were to try to reason our way toward a moral doctrine of defensive warfare, the results would look very different from what we have today. Since we are defending ourselves against attack, the most culpable person involved in the attack is the leader of the attack. I don’t think it’s right to put a bomb in the XIX Armored Division’s cafeteria, but perhaps we are justified in putting a bullet through the head of the president of Country A. Oddly, “kings do not kill kings”** and it’s the kings who cooked up that idea. I’m sure it’s coincidence that the kings came up with that rule. The cost of warfare should fall squarely between the shoulder-blades of those that start the wars.

David Wood: What Have We Done: The Moral Injury of Our Longest Wars

(** Saladin to Guy of Lusignan at the battle of Hattin. My guess is that Saladin spared Guy’s life so that Guy could go on to lead more unsuccessful wars. Any sufficiently incompetent enemy is an ally.)