I have added a new category to Stderr blog: “Genocide”

Charles Mann, “1491 – New Revelations of the Americas Before Columbus” (amazon)

Howard Zinn’s “A People’s History of the United States” is already on the list. (pirated)  (amazon) 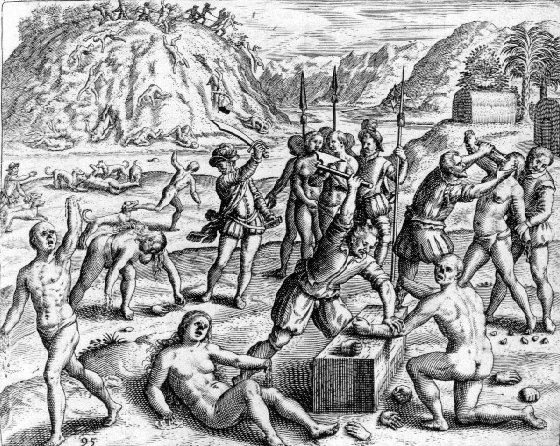 Arawak men and women, naked, tawny, and full of wonder, emerged from their villages onto the island’s beaches and swam out to get a closer look at the strange big boat. When Columbus and his sailors came ashore, carrying swords, speaking oddly, the Arawaks ran to greet them, brought them food, water, gifts. He later wrote of this in his log:

They … brought us parrots and balls of cotton and spears and many other things, which they exchanged for the glass beads and hawks’ bells. They willingly traded everything they owned… . They were well-built, with good bodies and handsome features…. They do not bear arms, and do not know them, for I showed them a sword, they took it by the edge and cut themselves out of ignorance. They have no iron. Their spears are made of cane… . They would make fine servants…. With fifty men we could subjugate them all and make them do whatever we want.These Arawaks of the Bahama Islands were much like Indians on the mainland, who were remarkable (European observers were to say again and again) for their hospitality, their belief in sharing. These traits did not stand out in the Europe of the Renaissance, dominated as it was by the religion of popes, the government of kings, the frenzy for money that marked Western civilization and its first messenger to the Americas, Christopher Columbus.

As soon as I arrived in the Indies, on the first Island which I found, I took some of the natives by force in order that they might learn and might give me information of whatever there is in these parts.The information that Columbus wanted most was: Where is the gold? He had persuaded the king and queen of Spain to finance an expedition to the lands, the wealth, he expected would be on the other side of the Atlantic-the Indies and Asia, gold and spices. For, like other informed people of his time, he knew the world was round and he could sail west in order to get to the Far East.

From there, the story gets uglier.