Whenever rational people are making fun of the “Noah’s Ark” myth, it’s inevitable that someone points out that Zheng He‘s treasure fleet was cooler than the biblical ark, and had the virtue of actually existing.

What I didn’t know is that the Chinese don’t mess around when they decide to build a reproduction. 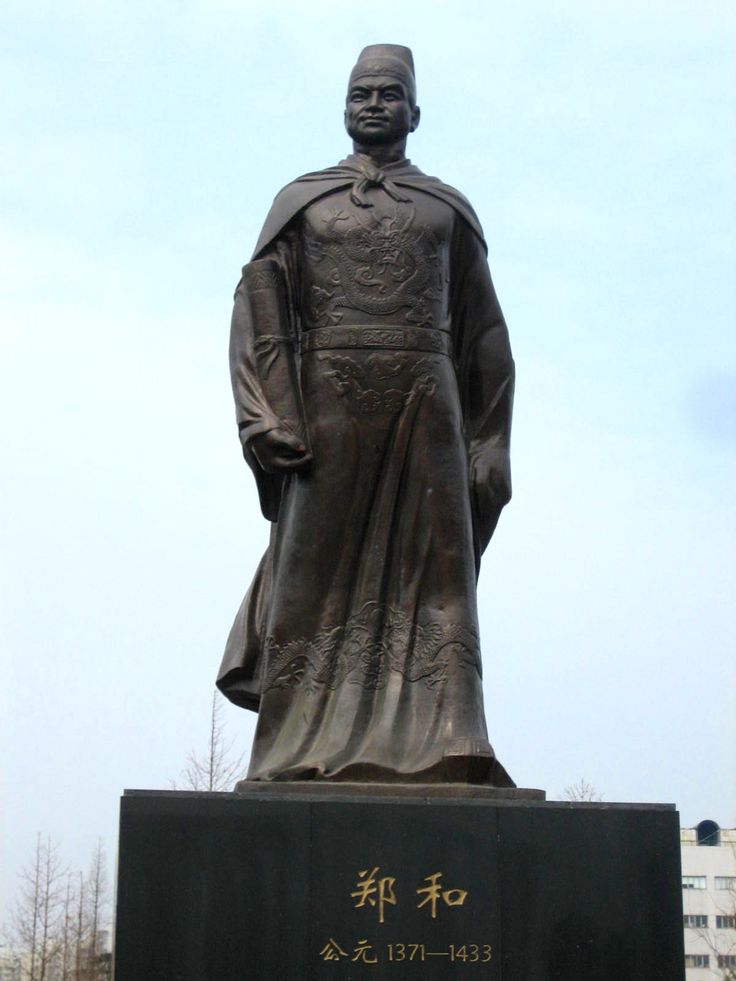 The way christians build an ark is: buy a steel barge then build a “boat” on top of it. I.e.: you start with a boat then build a boat. That’s sort of like building “my very own hot rod” starting with the chassis and power-train of a Dodge Viper. Zheng He actually sailed his boats, and they were actually built from the keel up, in Nanjing, with the help of 20,000-30,000 shipbuilders.

Building a wooden ship that’s intended to float and cope with things like typhoons* is not work for amateurs. And, if you get one thing wrong, you can wind up like Thor Heyerdahl’s Ra I.**  The people who built Zheng He’s boats had been building boats for a while, and knew what they were doing. They had to solve the very real logistical problems of getting the wood to the right place, drying, cutting and binding it, making it watertight, making the upper decks drain rain so it doesn’t overweight and flip, etc., etc. Ship-building is a serious, serious business, not to be undertaken by amateurs even if they’re inspired by god. If you read Massie’s Dreadnaught or Keegan’s The Price of Admiralty you’ll realize pretty quickly that strategic ship-building is so expensive a proposition that you’re gambling years of your nation’s economic output if you lose a fleet. For example, one does not simply go on monster.com and hire a crew for a sail-ship, then expect to survive in deep water. 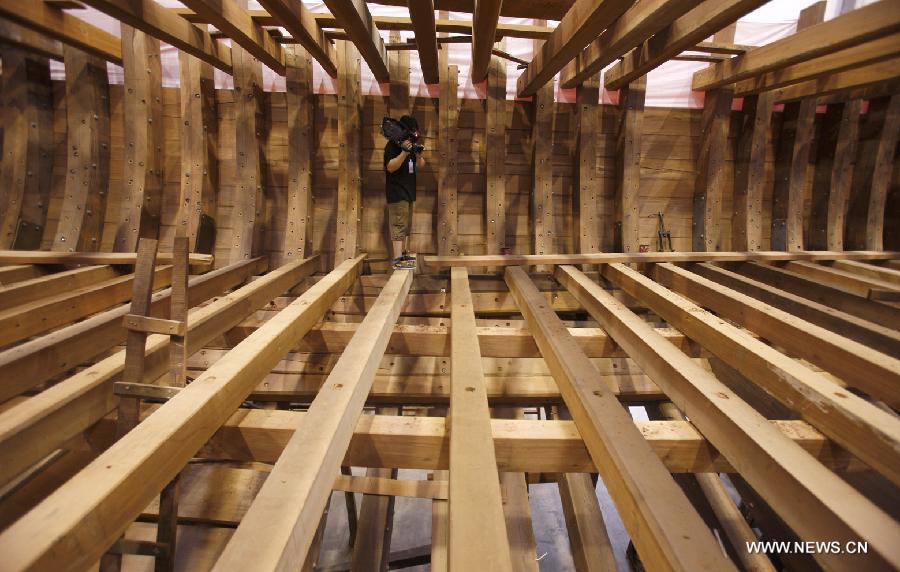 This is not your two-by-four covered with exterior plywood construction. 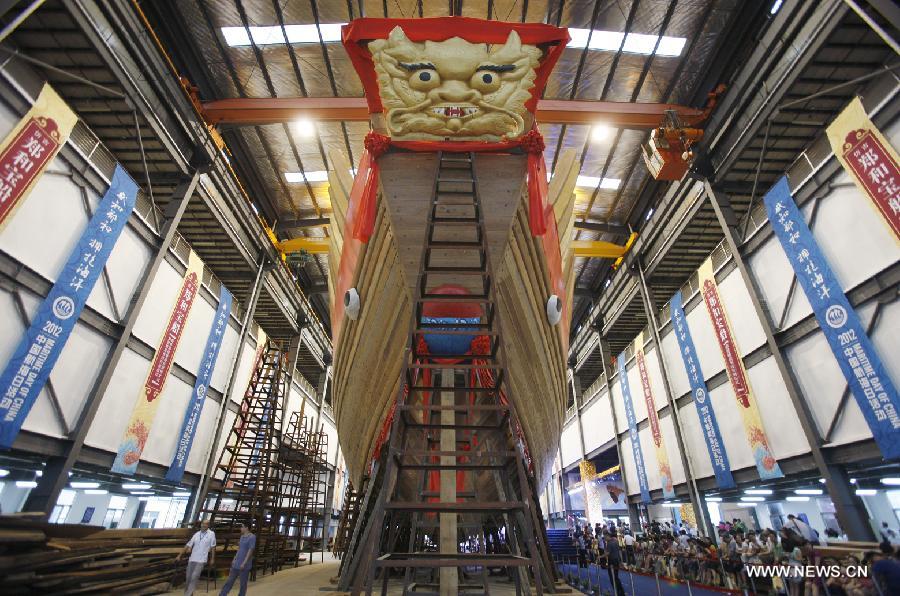 It actually has a keel! And googly eyes. 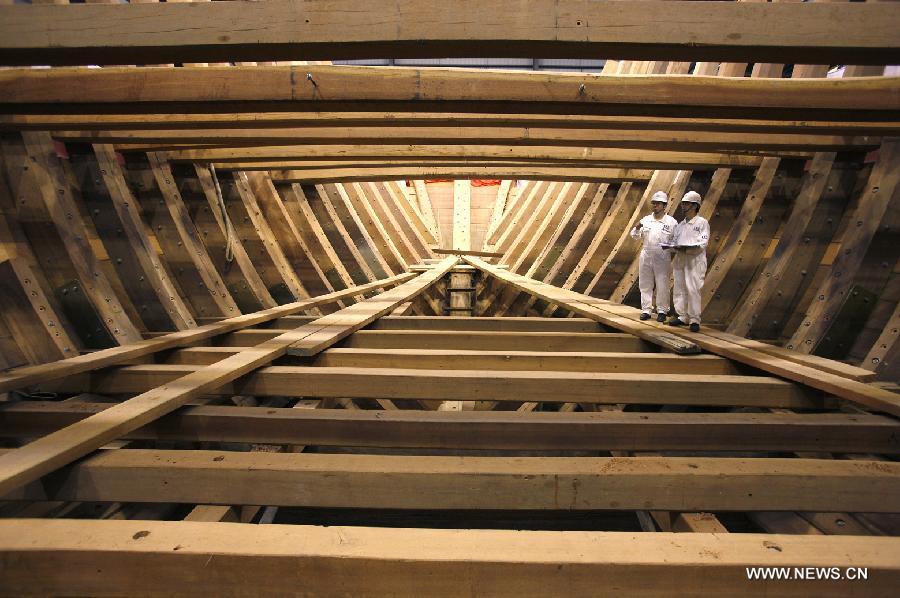 I love the guys in the bunny suits. Modern shipbuilding! 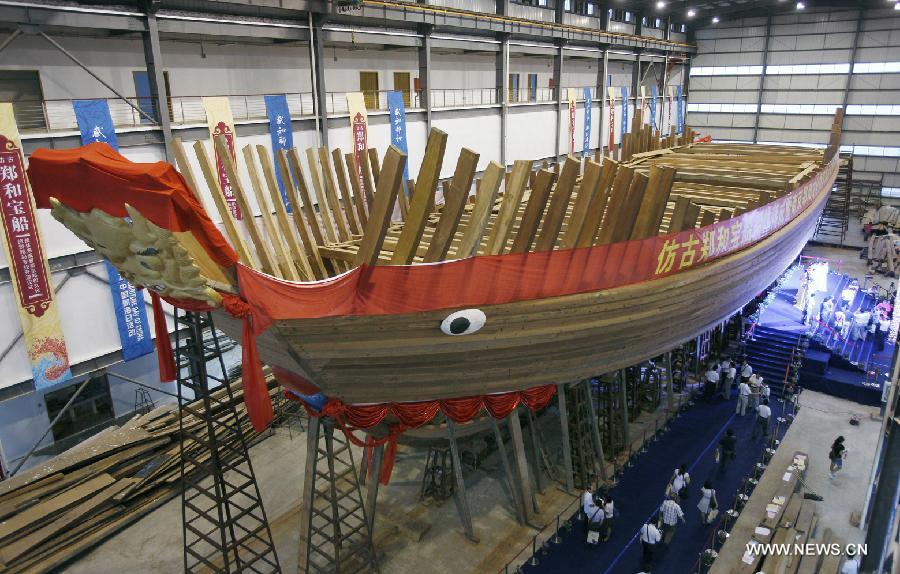 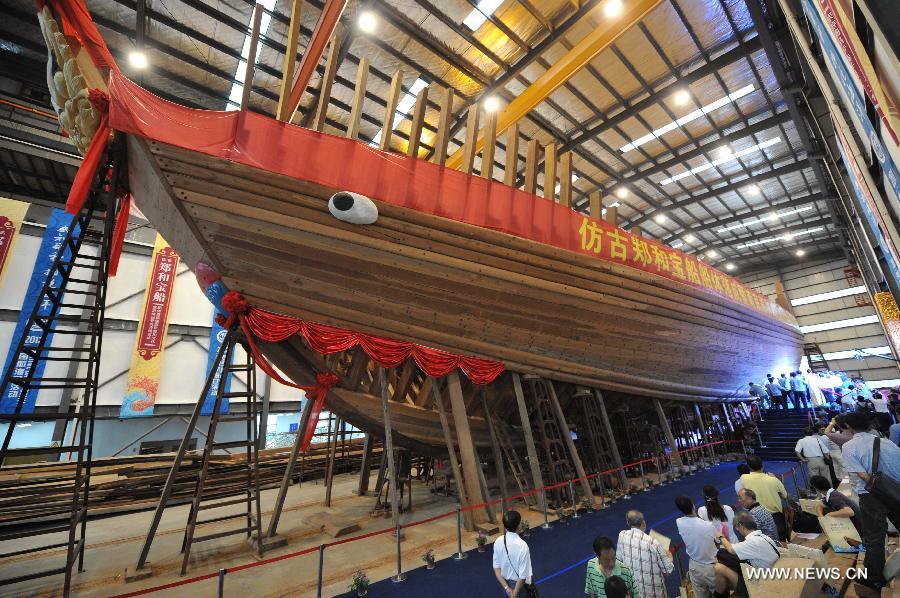 Source on the build pictures is: Xinhuanet

In its final resting place, it is not floating in the water. Because it’s a wooden ship and if you can keep them from having to sit in the water, they last longer. Unless they’re built on a steel barge, that is. 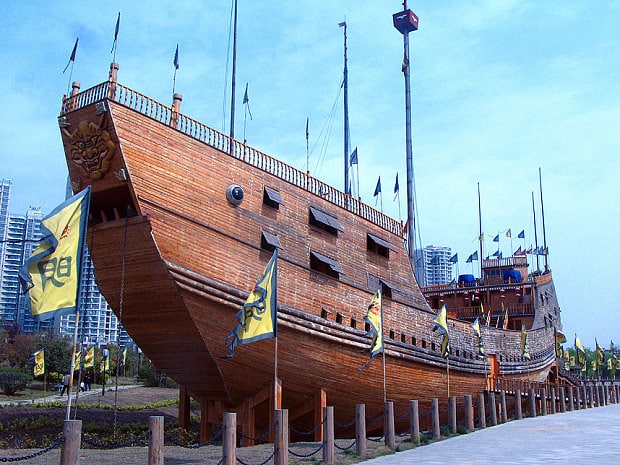 Looks to me like it’d handle sluggishly, with that high poop deck and forecastle. But that’d come in handy in a rough sea; you could run with the wind and waves would run under it. Maybe.

I’ll tell you one thing for sure: it’s more sea-worthy now than the various fake “Noah’s Ark” barges ever will be.

Tripadvisor: Things to do in Nanjing

Ancient Columbus’ Shipyard unearthed by archeologists (The Telegraph)
PS – Zheng He was not an “ancient Columbus.” Columbus was “a genocidal Zheng He”)

(* To be fair, a typhoon probably would have sunk the treasure ships. Typhoons are serious. But not as bad as what “Noah” supposedly had to deal with.)

(** I grew up reading about Ra I and II. So much respect for Heyerdahl! I am not sure he “proved” much but he sure had a great time and taught many people important lessons about “hey let’s try it! what’s the worst thing that could happen?”)

John Keegan: The Price of Admiralty

Robert Massie: Dreadnought Britain, Germany and the Coming of the Great War