Apparently there is some question as to whether George Washington’s family tree was lily white after all. White people often raped slaves*

What’s crazy, to me, is the idea – held by many in 2016 – that there are pure populations. Of any humans. I’m not a population geneticist, but my understanding is that if you’ve got a population and you add another population to it, within a fairly small number of generations, they’ll eventually wind up producing a new population that shares most of 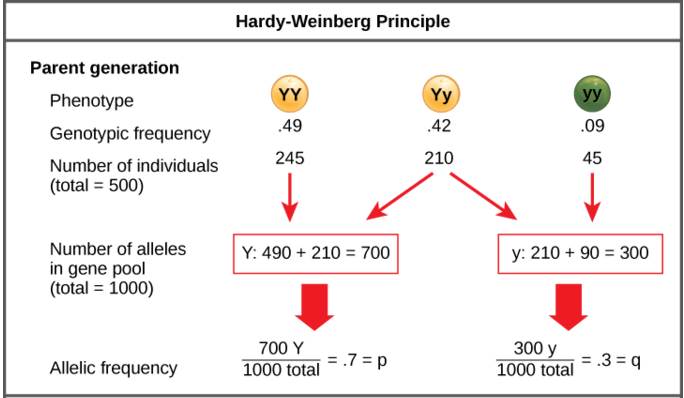 the genes of the original populations – especially if those genes don’t reduce fitness somehow. This is in accordance with the Hardy-Weinberg Principle, which appears to my non-geneticist eyes to be a straightforward application of statistics, allowing geneticists to reason about the proportion of alleles in the population over time, given a certain genotypic frequency and population size. You can simulate the effects of a new genotype coming into the population by watching the probability certain alleles will be expressed over time.  I think I’ve got that right (I expect the commentariat will correct me if I’m wrong!)

So, I got into a “friendly discussion” with a xenophobic racist, who offered the view that he was of “Pure English Blood.” Of course, I asked him what that meant, and he explained that his family were English as far back as could be, and hadn’t interbred with any (whatever)   I tried to break it to him gently** that it didn’t matter whether his family were “Pure English Blood” if they bred with anyone who wasn’t – which included anyone whose ancestors’d bred with anyone who’d bred with anyone whose ancestors weren’t “Pure English Blood.” I let that sink in for a little bit and then mentioned that England had, at various times, been overrun by Danes, Romans, the French, and Americans. So I asked him how he was sure that his great-great-great-grandwhatever-to-the-N’th hadn’t had a bit of a Roman holiday behind the woodpile? And, if that were the case, maybe he was part Italian. Or maybe a viking*** paused between looting and pillaging to do a bit of raping before they burned things. “We could be related, cuz.” I told him, then he blocked me.

Van Halen was clearly right. When we look at the genetic shadow cast by Niall of the Nine Hostages, it’s pretty clear that Niall wanted some, and got it, and:

Early in 2006, geneticists at Trinity College, Dublin suggested that Niall may have been the most fecund male in Irish history. Of their Irish sample, the geneticists found that 21 percent of men from north-western Ireland, 8 percent from all of Ireland, a substantial percentage of men from western and central Scotland, and about 2 percent of men from New York bore the same Y-chromosome haplotype. The geneticists estimated that about 2–3 million men bear this marker, and concluded that these men are patrilineal descendants of Niall. (wikipedia) 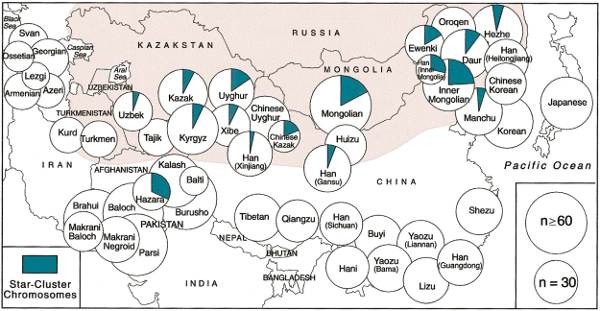 Pure blood is a myth (source)

The same can be said of Ghengis Khan, who – well – if you’re from any part of the world that the Mongols rode over, you’ve got a good chance of having some of the great Khan’s genes. When the Great Khan wanted some, he got. One in 200 men is a descendant of Ghengis Khan, which gave my internet “Pure English Blood” friend a better than lotto chance of being part Mongol. Personally, I’d think that’d be pretty cool. After all, conquering peoples tend to spread their genes pretty lavishly, which means that we’re descended from a great line of conquerors!  Conquered, too, if you like that.

Understanding of population genetics also ought to put to bed any claims of “ancestral lands.” Because, you can pretty much pick your ancestors, and say “Oh, yes! Ancestral lands!” Since I’ve got some Irish in me, and some Norwegian in me, and some other random American stuff in me, I’m probably part whatever I feel like I want to be. Do I get to claim my homeland north of Dublin, Ireland, or do I get a piece of the middle east? I may have some indigenous peoples in me on my great grand-mother’s side, but nobody ever knew for sure, or cared very much. Is Lyle, Wisconsin my “ancestral home” or is it Hell, in Norway?**** The “ancestral lands” issue is, of course, a big problem, when you have a racist state established on the myth of blood-lines in the middle east. Conflating cultural artifact (tribe) with racial interpretation (blood line) can lead to some horrible, violent, errors. The Nazis were as wrong about their ideals of racial purity as they were about the idea that a population could exist within other populations for thousands of years, and still be a blood-line at all. I’d bet that a lot of those Nazis were descended from Mongols because: 1 in 200.

People who imagine they’re pure blooded anything are living a racist fantasy (or they’ve mistaken racism for classism, which happens because they tend to go together) that utterly ignores the reality of conquest and human mixing, which is how humans have, you know, made humans for a very long time. You don’t have to go far back, either – World War II was a massive gene-mixer, especially in the parts of Europe that the Red Army marched across (though the Wehrmacht were no slouches in the burn, loot, pillage, rape department) (and the GIs were pretty skilled at wartime “romance”) (etc.) – there were rapes, and war brides, and casual flings, and the great big melting pot of humanity got another big stirring. It’s not just the winners’ raping-sprees, but the losers, as well. I occasionally wonder if the real concern some Europeans have about the refugees pouring in from Libya and Syria is that their “pure” blood is going to get admixed, as if the turmoil from WWII wasn’t enough. But they should remember – some of those Syrians and Libyans are certainly descended from Romans and Crusaders (and Mongols, of course) – they are little bits of DNA returning to their ancestral lands.

A funny thing happened a few years ago, I was in Ireland and made a point of visiting the (known) ancestral homestead. And, as I got to a pub and was drinking a cider, I asked if there were any McGroders around, because I was an American who was part McGroder and I’d come by on a lark. And one of the locals looked at me, “McGroders? Around here, we call ’em ‘The Danes’ because they’re all tall and blonde if y’know what I’m sayin’.”*****

I was initially a bit thrown by the “Niall… most fecund male in history” because that didn’t seem to line up with Ghengis Khan 1 in 200. Then I realized that Niall (600AD) had a 600 year head-start on Ghenghis (1250AD), so the shadow he cast was longer, proportionally. Do we measure these in terms of overall percentage of population? Niall wins with 20% to Ghenghis’ 0.5%!  Or do we measure in terms of global population of descendants?

As slaves, the women could not consent to the sexual advances of the plantation owner’s adopted son, but Kunkel said she tries not to think of the acts as rape.

“I try to focus on the outcome. He treated Maria with respect after the fact,” she said.

I probably don’t need to say anything further about that.)

(*** My Norwegian ancestors were always fishermen. So I am told. But it’s nice to be able to play the “viking card” occasionally.)

(**** I do get to say “my people came from north of Hell.” Which is some kind street cred or other.)

(***** I heard a really funny joke about that, but I’m not sure I can type it in, because it depends on pronounciation. So here it is:  WARNING: mildly “ethnic” but appropriate in this context