There’s an important piece being published at The Guardian, regarding the CIA’s attempt to conceal its torture program, and how congressional investigation was stymied (and allowed itself to be).

Most of it is material you should already be familiar with:

There are parts of the story that keep jumping out at me, parts which hint tantalizing at deep reservoirs of festering bullshit that the investigators surely know exist, and have chosen not to notice. For one, as before,  there is the issue of backups. The Guardian’s story describes how investigators were given a shared secure(well, secure-ish) network by CIA, with documents dropped in from the outside for the investigators. 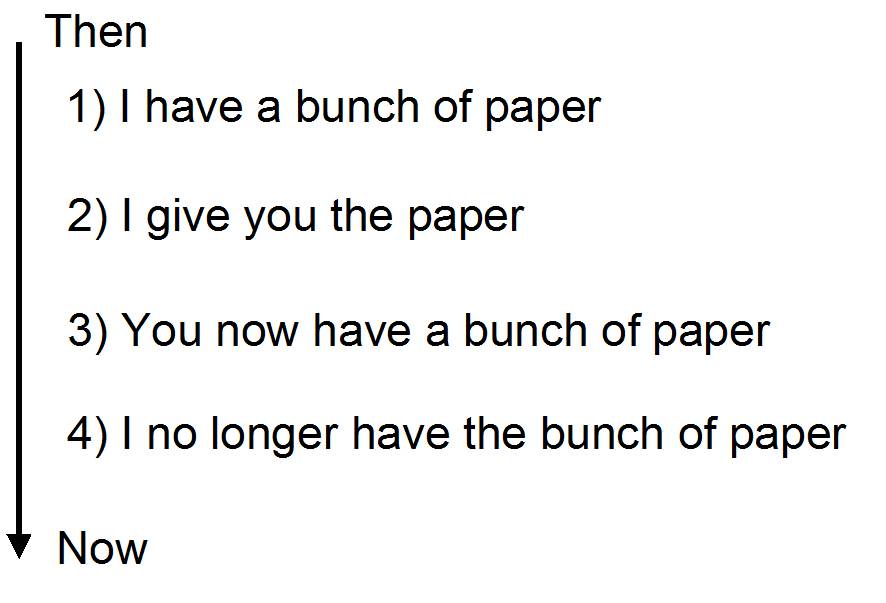 At least that’s how things looked back when Lucretius’ De Rerum Natura was nearly lost – that was a downside of the medieval approach to manuscript: it was manu and scripted and they didn’t have digital copy machines which are basically a scanner connected to a computer connected to a printer. 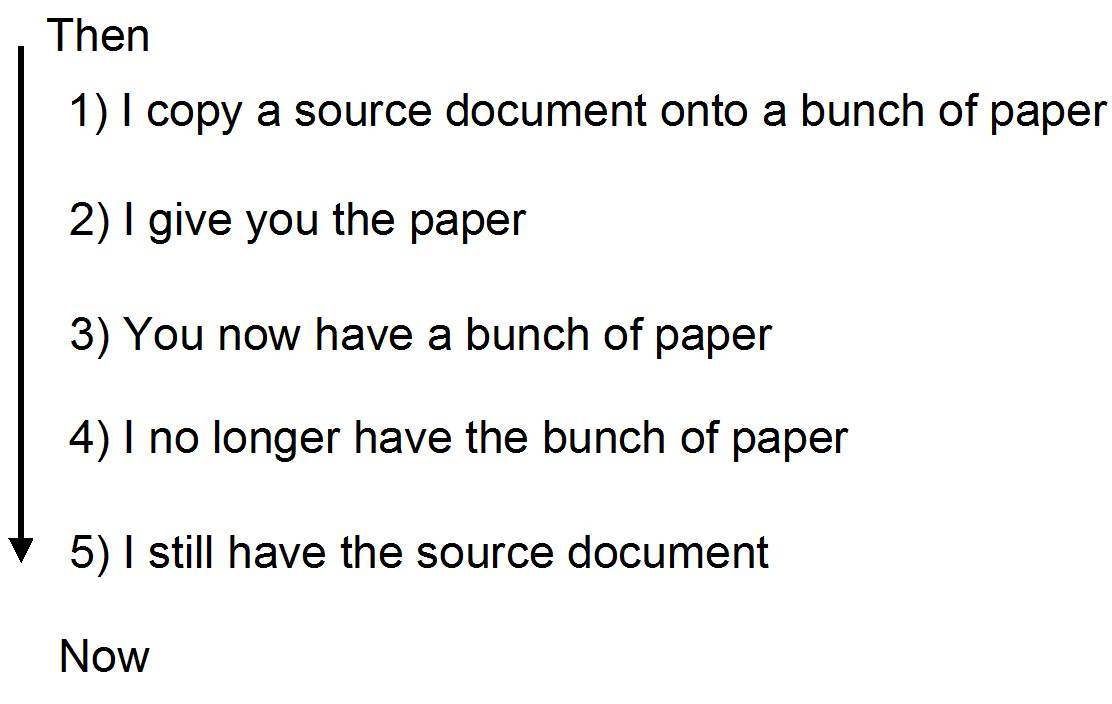 What “giving someone a document” actually looks like is Workflow #2. For some reason, the government wants us to pretend, along with them, that Workflow #1 is how documents move, whereas anyone with any experience with actual documents knows it looks more like Workflow #2. 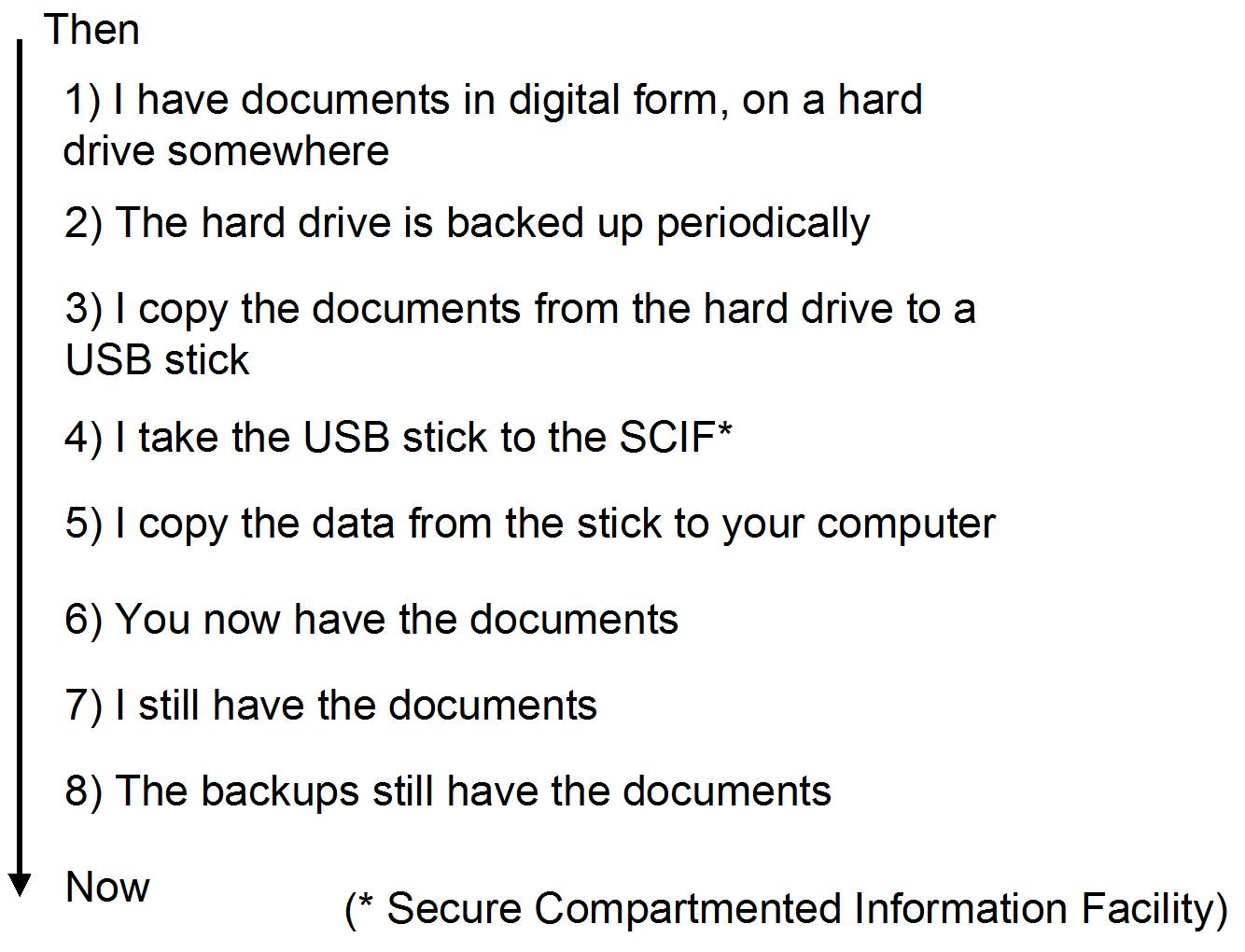 One of the key points that this scandalous story goes along with is the idea that data is easily destroyed, when all of our computer systems practices and processes are designed to make every effort compatible with convenience to ensure that does not happen. But, what baffles me is why the Guardian’s reporting goes along with the CIA’s utterly bizzare lie. When the data disappeared off the shared system, the CIA says “Oh, it’s gone now” and the congressional investigators stare sadly at the table, “yup, life sucks.” Are you fucking kidding me? Try this: “Get me another copy, even if you have to pull it from backup.”

Actually, some of the people who did the torture are still alive and well and probably collecting CIA paychecks. Others, who destroyed the tapes** are known to the CIA and (to some degree) to congressional investigators. Destroying the tapes does not cause their personal experience to somehow vanish from their minds. “Ooops! I deleted the evidence, now suddenly I can’t recall anything at all!”  That’s not how human memory works. That’s not how data moves.

That’s certainly not how bureaucracies work. We can be certain that the CIA has information in its institutional memory about who did what, and when. People submit expense reports that they flew to Thailand and stayed at Facility X for 3 weeks, people get paid to clean up Facility X, people provide food, people sell the gear, people keep the lights on, none of this stuff happens in a vacuum. Sure, it happens in secure compartments (that’s how security is done!) and covert operations are performed on black budgets that don’t have line-items like: “nylon straps, 5ea, $400”, “therapeutic backboard, 1ea, $3200”  But someone approved those expenses, and the people managing the logistics of the torture program could probably tell you damn near as much about what happened as the people being tortured, could. (By the way, since we are talking about a high crime, here, why hasn’t law enforcement done what they always do in pretty much every case: ask the victims? “Hey, can you look at these 30 pictures and point out the guy you say waterboarded you?”)

They called it the Panetta Review because the agency prepared a summary of its renditions, detentions and interrogations work for Director Panetta, who had come to Langley after Obama shut the program down. One version was a Microsoft Word document, clearly a draft, with the function allowing users to see each others’ changes enabled. Another version, apparently more final, was a PDF. Iterations by CIA were clear on view: “You could see the attorneys looking at it and saying, ‘Well, let’s make sure we can back this up, can you add more citations?’”

So, that’s one point. To summarize: the institutional memory of the CIA is not magically wiped clean when a few tapes are destroyed. Everyone, from the CIA to congress, to (unfortunately) The Guardian’s reporters – are accepting a lie that doesn’t stand up to a few seconds of scrutiny. President Obama, the Harvard-educated lawyer, “we tortured some folks” even starts talking like a dumb hick to help sell the “gosh we’re just so forgetful down here, we’re all a bunch of chucklefucks and you should see those CIA guys, they can’t remember what they had for breakfast, let alone who they strapped down and waterboarded over and over, nyuk, nyuk. What was I saying?”

It turned out that those contractors the committee thought the CIA hired to aid in collecting responsive documents were also acting as gatekeepers. They would review torture documents three times before disseminating them to the investigators to determine not only relevance, but whether higher-ups ought to make the call to turn them over. In some cases, the chain went up to the White House, to review for executive privilege – advisory conversations with White House staff, a broad category that typically keeps a record within the hands of an administration.

Oh, in other words, the “gatekeepers” know everything that was in all the documents. So we’re supposed to pretend that nobody knows anything, within a few sentences of the gatekeepers knowing everything. If this were a criminal investigation (which it should be!) that would be called “conspiracy” – except in this case, everyone including the reporters is in on it.

I have an idea for how you could learn everything: offer to waterboard the “gatekeepers.”  We wouldn’t actually have to do it, because they already know they’ll break and spill everything when the Saran-wrap goes over their mouth.

The other head-explodingly horrifying bit of the story is tiny. It’s kind of tucked over to the side, like a razor blade hidden in a slice of chocolate cake. Quoting:

The lack of communication had serious consequences. Without Durham specifying who at CIA he did and did not need to interview, Jones could interview no one, as the CIA would not make available for congressional interview people potentially subject to criminal penalty.

Got that? The CIA was allowed to tell the congressional overseers that they wouldn’t make anyone available to talk to the overseers who might potentially be subject to criminal penalty. That is the literal definition of “above the law” – hey, I’ll let you talk to people, sure, except I won’t let you talk to anyone I know is a criminal. Doesn’t that very construction mean that the CIA knows who is potentially subject to criminal penalty? Hint: those are the people you should be talking to. The CIA’s got a serious epistemological problem, here, and everyone is letting them walk away with it.***

It’s like one of those bad cop shows (except without Ice-T) where the prosecutors offer immunity to a complete douchebag to get testimony. Except apparently congress accepted that, the investigators accepted that, and The Guardian’s reporters just let that rather important point slide by as if it’s just another bit of landscape seen through the window of a fast-moving train.

(* Nobody competent does all their backups to a single medium. We can refer to the “backup copy” as if it is a unitary thing but “backup copy” actually consists of dozens or hundreds of copies over a window of time.)

(** Seriously: are we supposed to believe that the CIA has a VHS videotape recorder spinning tape of torture sessions, and that someone got their hands on the tapes and ordered them destroyed? That’s also bullshit. The tapes were produced at a “black site” in Thailand, but was the original source material tape? Or was the camera recording to a hard drive and the tapes that were destroyed copies? See Workflow #2. Either way: someone made the tape and that person’s identity is known to the CIA. Part of the dance*** being danced here is that destroying one set of copies of the tapes somehow causes everyone involved to forget what happened, too. There are loads of witnesses: ask them. They’re shameful motherfuckers who are keeping silent to protect themselves and their criminal co-workers, and they’re convincing themselves its “national security” not self-interest.)

(*** Traditionally, Washington analysts would call this “Kabuki Theater” except that Kabuki is actually an art-form and it’s more accurate to call these “flat out lies” or, perhaps, “Gives me the lie i’ th’ throat as deep as to the lungs? Who does me this?“)

Trump On Clinton As A Shooter » « On Power