In my previous entry I described the process of front-loading and political engineering in DoD procurements. As I was writing it, I happened to look over at PZ’s blog and saw there was discussion of Ray Kurtzweil… So I thought I’d maybe Kurtzweil a bit about the DoD.

Sometime in 2040 the US Air Force will hit the Bomber Singularity.

I took the costs of bombers, adjusted for inflation (which hardly matters) in round $millions, and chose heavy bombers that actually flew and bombed stuff. So we’re not comparing an F-16 to an inflation-adjusted B-52. 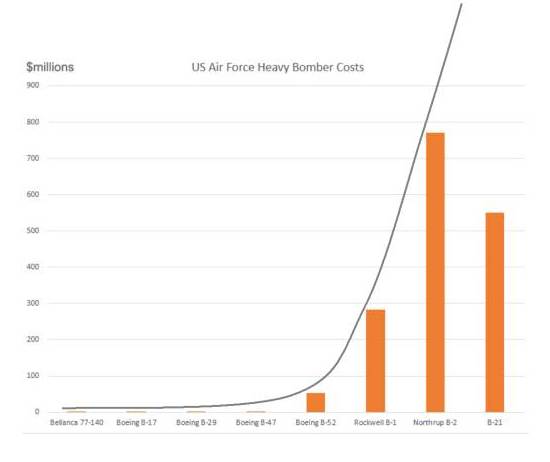 Omitted are things like the XB-70 Valkyrie, which was $770million per plane but they only made a few of them and besides – since I’m trying to do like Kurtzweil – it would have made an ugly bump in my chart of cherry-picked data. Joking aside, the reason I stuck with production bombers is that – in some cases – the unit cost did drop because of quantity; like the B-29.

There’s another thing that sort of messes up my chart, and that’s the B-21, which the Air Force is ludicrously claiming will cost less than a B-2. The Air Force is saying they’ll cost a ‘measly’ $550million apiece, but the program hasn’t even started to be front-loaded and hasn’t even had a single cost overrun yet. Just wait. If I’m still alive in 2030, when the plane is allegedly going to be ready to bomb things, I’ll be here to say “I told you so!” A more realistic estimate for the B-21 is (inflation-adjusted) $2000million. That’s conservative, actually, the F-35 is currently costing 5x its original projected cost; I suspect cost-padding techniques will have progressed significantly by 2030, and the B-21 will cost 10 to 15 times the number the Air Force is projecting. 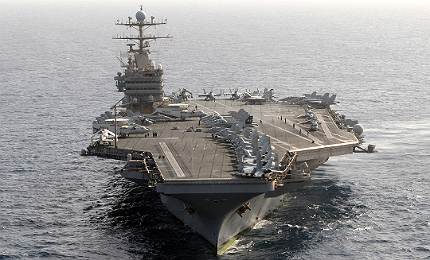 You know what else costs about $4000million?

We’re heading toward a “singularity” – by which I mean that the Air Force becomes a single bomber, a single fighter, a bunch of spare parts, and a handful of pilots. Think how much money they’ll save on pilots, since they basically won’t have any planes  to fly!

Ok, joking aside, my Kurtzweilian chart only shows that the Air Force is pretty much completely wrong about their estimates for the B-21. How can this be? Surely they’re not lying?! 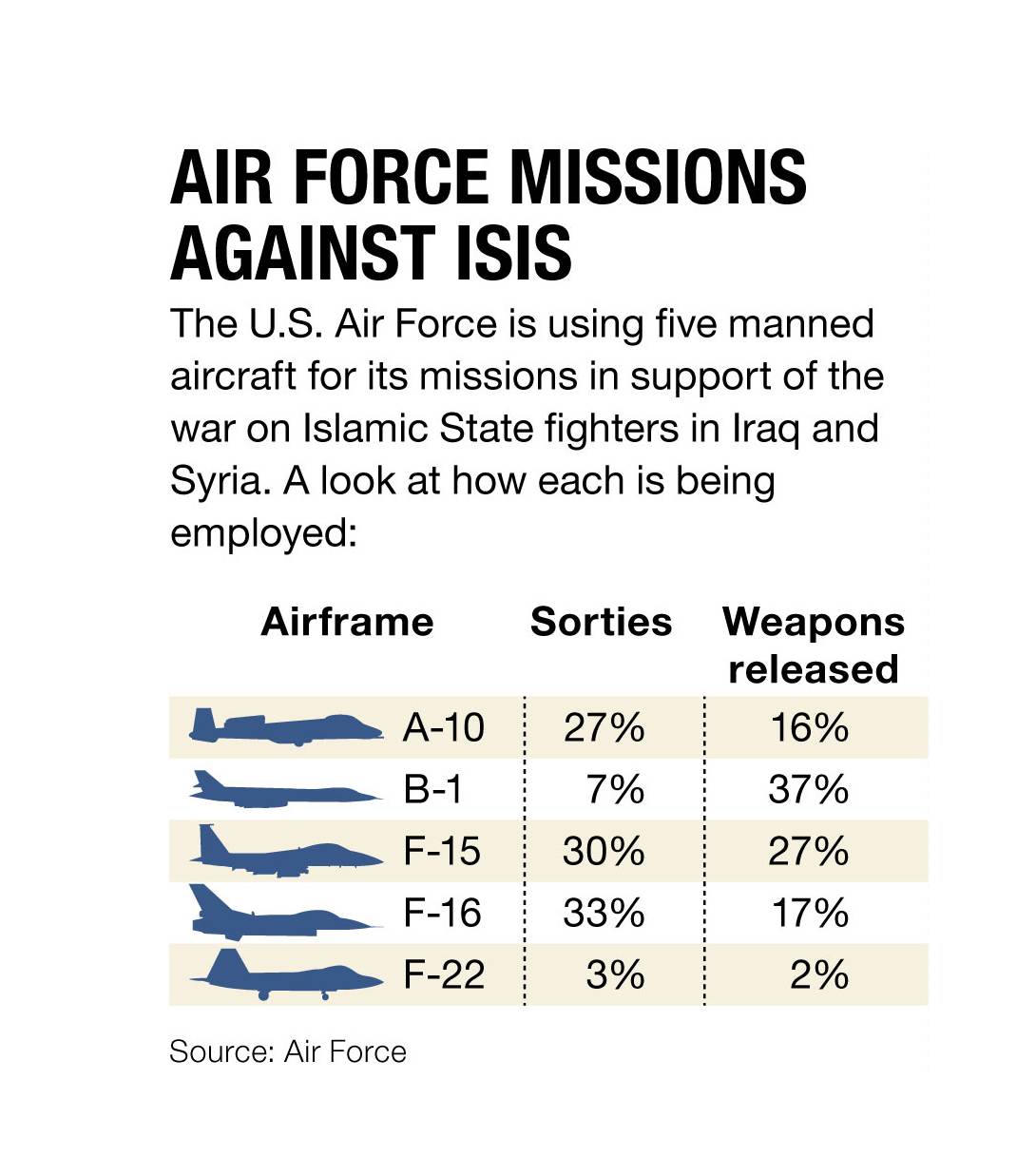 As a peacenik I kind of approve of some aspects of this situation. As the cost of aircraft goes asymptotic (I could generate a similar chart for fighter aircraft) the number goes down, which means the US is increasingly terrified of losing one of them – since it’d be a measurable percentage of the Air Force. We can already see this effect in the US’ airstrikes in Syria. Here’s an interesting graphic I got from Air Force Times:

That chart’s a bit old – they don’t have the B-52s in there, which probably dropped more exploding stuff than everything else put together as soon as they came off the bench.

Do you see what I see? Yeah, all the actual work is being done by the old workhorses, not the new hangar queens. The extremely expensive stealthy fast-moving stuff: it’s too expensive to risk. It’s also (probably) taking a lot more downtime. For example, the F-22 is more expensive to fly ($68,000 per flight hour) than the F-16 ($5,000 per flight hour) and mean time between maintenance (MTBM) of 3 hours – yes, that means what you think it means: you fly the thing 3 hours and it’s got to be pulled over and something needs to be replaced, checked, or topped off. It appears to be impossible to get a solid MTBM for an F-16 or an A-10, unfortunately. But the cost per flight hour is revealing.

The F-22s are down there because, if the Syrians actually manage to get a combat-capable jet up in the air, they’re going to – do something. Remember, the US is not at war with Syria (ha! ha!) so if a US F-22 shoots down a Syrian Air Force plane, it’s maybe a naughty bad thing. Like:

The U.S. military on Friday dispatched two F-22 Raptors stealth fighter jets to intercept a pair of Syrian Su-24 Fencer aircraft that flew in the vicinity of Hasakah, Syria, according to news accounts citing an unnamed Pentagon official.

The American pilots of the fifth-generation fighters made by Lockheed Martin Corp. tried to radio the Syrian pilots but didn’t receive a response, according to CNN’s Barbara Starr.

The Raptors chased away the Fencers to protect U.S. Special Operations forces that are operating in the area, and no weapons were fired, according to The Los Angeles Times’ W.J. Hennigan.

“Hey Syrians! Get out of your airspace!!”  I bet they didn’t respond because they were probably not aware that there were stealth aircraft operating in the vicinity.

Those aircraft the F-22s rousted: 1970s-era SU-24s. That was a relatively inexpensive Bambi versus a top-dollar Godzilla.

Which brings me to the point of this Kurzweilian exercise: the aircraft the US Air Force wants at the singularity are aircraft that nobody needs, not even the US Air Force. What the US Air Force needs is planes that pretty much work. The Russians and Chinese are also working on stealthy aircraft and that’s definitely an interesting strategic problem – but the US Air Force isn’t going to send its dwindling supply of F-22s against either of those nations; “extended operations” don’t really apply when you’ve got aircraft that are in constant need of maintenance. (Besides, as I mentioned elsewhere, the F-22s will be wiped out in their hangars by cruise missiles from thousands of miles away)

The Air Force ought to not be building bigger, better, high-tech boondoggles. They ought to be building affordable high-reliability survivable platforms suitable for fighting imperial anti-insurgencies. Cold War scenarios of the great big 3 hour throwdown (and then you need maintenance) between NATO and the USSR are not going to materialize unless the warmongers in Washington really go out of control and manage to drop everyone into a world of hurt.

The Atlantic has a great article “Uncle Sam Buys an Airplane” that I only found after I wrote this and my previous. If I’d known it was there, I would have just posted a link. I also had never heard of Norman Augustine or his “laws”:

“In the year 2054, the entire defense budget will purchase just one aircraft. This aircraft will have to be shared by the Air Force and Navy 3 1/2 days each per week, except for leap year, when it will be made available to the Marine Corps for the extra day.”

The article is from 2002, and describes Dick Cheney’s “low-high” strategy, which is basically where the Air Force has stuck itself: expensive stuff flying guard over cheaper more practical stuff. Sound familiar?