Baudelaire’s poetry was fuelled by opium and alcohol (what, did you think they were just dissolving sugar in their absinthe?) and he led an appropriately decadent life for an artist.

(Here’s a full-size version of the etching, if you want to see it. A few years ago someone who had the original plates for the etching did a series of pressings with them; they occasionally crop up on Ebay for surprisingly low prices – on the order of $30. A perfect gift for the Baudelaire fan in your life!)

The golden age of art books happened, as these things do, right before books became a commodity and people stopped lavishing attention on them. That suits me fine because there are enough great art books out there, and you can get them for relatively affordable prices on Ebay. Ebay, by the way, is a great place to look for weird/rare/antiquarian books – you won’t get the top-notch stuff (it seldom shows up) but you’ll find the 1st editions that the professional book-hounds turn their noses up at.

In the course of this series I’m going to point out a few of the better deals on these bound lovelies. Like with Systemantics, it’s a deliciously giftable idea if you happen to know a deserving book-worm.

Let’s look at the 1947 edition of “Flowers of Evil” (Fleurs Du Mal) which crops up on Ebay in the $40-$70 range. You’ll occasionally find extra fine editions in the $300 range but – just: wait. Set a search and sooner or later someone will put one up with “buy it now” for $45 and you can dance the happy Ebayer dance. 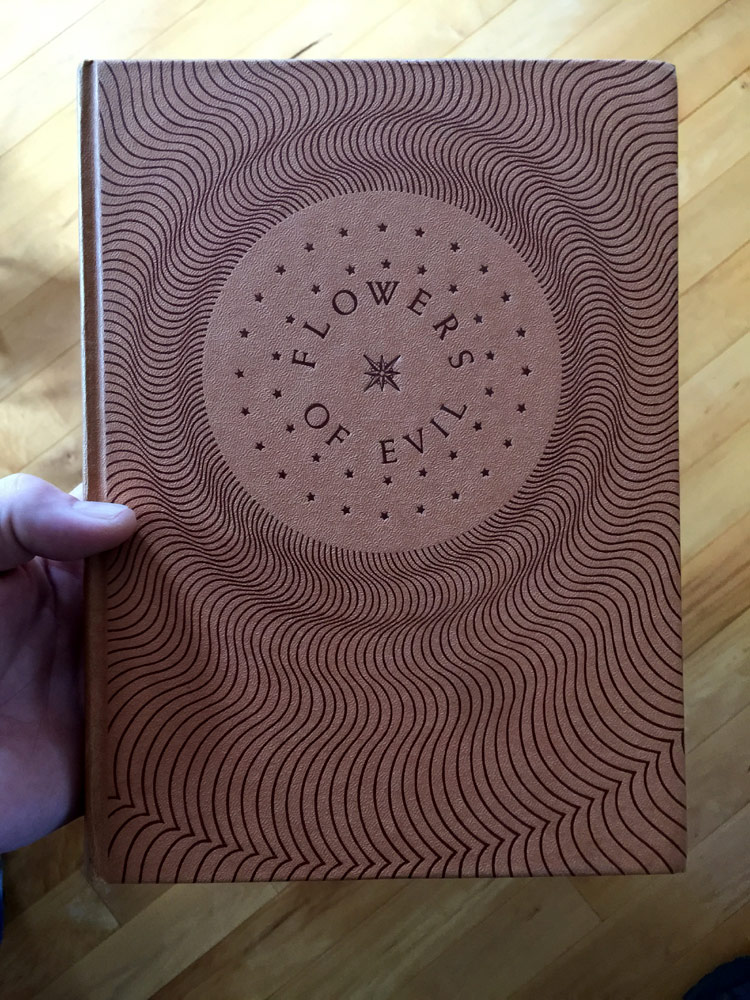 This is one reason I whinge about the wretchedness that is books today. Sure, a Kindle or an iPad is lighter and backlit. But there’s a tactile joy to these things.

I don’t believe it was printed on a letter-press with movable type; there’s no sign of impressions on the page. But it sure looks like it. Every page is elegant.

There are illustrations throughout – all suitably louche, featuring a world-weary avatar of Baudelaire, suffering the ennui of eternity. 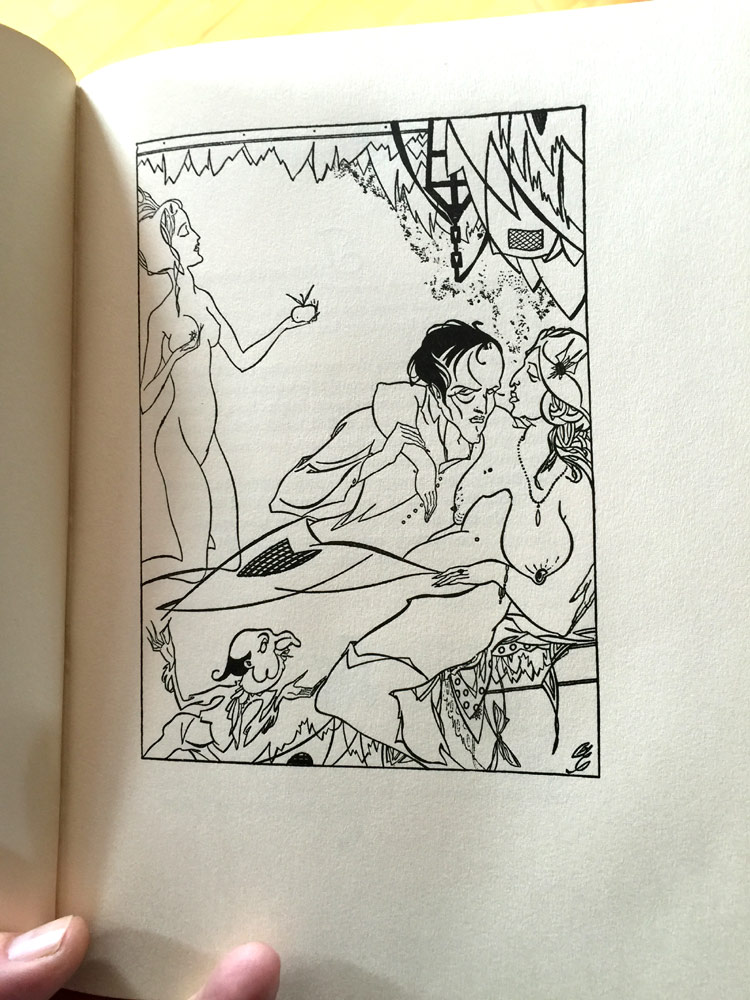 I love the art; it’s reminiscent of Aubrey Beardsley on opium. The cover says “Beresford Egan and C. Bower Alcock”

We need to remember that there was a time – 1947ish, to be exact, when books like these were banned pornography. People were arrested for screening movies that had implications of infidelity, and a book with a picture of bare breasts in it was likely to wind up on the bonfire of the vanities. For all that the US has made a big deal about freedom of speech, and so forth, it’s actually always been a fairly repressive country dominated by religious fundamentalists whose methods and mores are closer to the Taliban than to the enlightenment.

The Olympia Press in Paris was churning out books like “Tropic of Cancer” “Naked Lunch” “Histoire D’O” and “Lolita” – you can find those on Ebay, too, by the way: a 1st edition Olympia press version of Lolita will set you back about $3,000 – which is really not bad for such an important piece of literary history. Books like these were printed for a discrete “art” market, and were sold to the cognoscenti. Olympia Press were not great warriors of freeze peach, they were just out to capitalize on a new market that they did a great deal to create. By lowering the bar, they simultaneously raised it.

This is a reference shot of Baudelaire that I just had to include because it’s so darned gorgeous. I’ve done wet plate photography and there’s only one technique more demanding and frustrating and that’s daguerrotypes. The lighting and depth of field in this are perfect, the fall-off from the lens (looks like a big petzval) is yummy. Look at the depth of field on his neck-cloth! You can tell this was lit with light falling through a studio ceiling-window – most old portrait studios worked that way; the “hot spot” on the background is a gradient done with paint on the canvas hanging behind him.