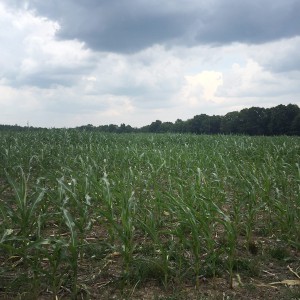 The corn is a bit shorter close to the drive, where the deer have been eating it.

A few years ago I had the warped idea of doing a GMO of my own. I don’t have a dog in the “War On Drugs” fight other than that I hate to see government have more to spend money and shoot people over. But I realized that it’s within the reach of an individual to make a significant difference using GMO techniques: roundup-ready coca plants, cold-hardy coca plants, cold-hardy papaver somniferium, and roundup-ready marijuana. I asked a friend who works in biotech patents about the feasibility and he said it’s probably within the reach of a dedicated amateur in a decade, or a professional in 2 years, and you’d need about $100k in gear. Then he said, “It’d be interesting to see what would happen – you’d have a perfect trifecta of badness coming after you: the DEA, the central american drug cartels, and Monsanto. You’d better hope the DEA caught you first.”

By the way, I bet that if someone was selling GMO pot, suddenly nobody’d mind, “hey, give me a hit of that flounder-weed!”