I was in Boots this morning and they were offering an anti-snoring ring for only $60. It looked like a pinky ring. A fairly ordinary one. In fact, you are supposed to wear it on your pinky. 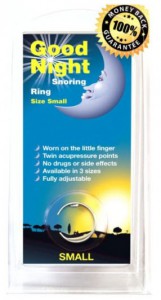 How does that even work? (I know: it doesn’t)  What is the theory of operation? This is not the “genetic fallacy” (rejecting something because of its origin) but rather a matter of basic epistemology (how do we make claims of knowledge) – how does the manufacturer have the ability to claim that the ring works, unless they have some kind of theory of how it works? Note that this is the root problem the scientific method tries to address – how can we fairly conclusively establish apparent cause and effect? A scientist would say that after a certain number of experiments that showed that the ring’s use stopped snoring, we might say “there appears to be a relationship between the ring and snoring”

One thing that always bugged me about much woowoo and most religion is that it has no plausible theory of operation. So, then, how does the proponent of the woowoo know it operates at all? Clearly, they don’t.

A few years ago a fellow I used to work with went off into woowoo land and told me he was selling a “healing modality” (“modality” and “quantum” are woowoo alert signals) that helped joints heal by beaming an unknown undetectable energy at them. I said, “if it’s unknown and undetectable, how do you know it’s there at all?” He just walked away, which – all things considered – was a pretty good response.

If the box on the snoring ring had said, “figure out a way of putting this pinky ring around your neck” then I’d accept that there was a theory of how it might actually function to stop snoring. $60 for a pinky ring – it ought to at least have a cabochon on it or something! I’d have bought one to take a picture of it and scan the instructions for you, but I don’t think I’m interested in rewarding the manufacturer of this little scam-item. Fortunately, there are pictures of it on Boots’ website.

Hardcore Gaming » « Monday Meslier – 173: HOW THE UNION OF RELIGION AND POLITICS IS FATAL TO THE PEOPLE AND TO THE KINGS.