I wanted to elaborate on my Best Friend Jason Kenney’s “poor counsel,” in which he advised the Albertan government to reach a “compromise” with the two Baptist schools that refuse to adhere to Bill 10, a law signed in by the previous conservative administration that obligated all schools to form a Gay-Straight Alliance or Queer-Straight Alliance should the students request one.

Shortly after these comments made the news, David Climenhaga of Alberta Politics pointed out that as a human rights issue, there is no reasonable way to compromise between Queer lobby groups who largely wish to enjoy the same privileges as anyone else and religious lobby groups who want to continue bludgeoning us out of existence.

Just to elaborate: the “Gay Agenda” has largely been about accessing the same civil sectors as anyone else, and enjoying the privileges that we are supposedly afforded by virtue of being a Western democracy. But religious reactionaries campaign from legal exemptions to treat Queer folks equitably in the name of their faith, thereby re-ifying the nature of cishetero privileges by making them, well, privileges rather than rights.

So I would like to see Climenhaga’s question repeated until it’s mainstream: “Where, exactly, do you plan to compromise?”

END_OF_DOCUMENT_TOKEN_TO_BE_REPLACED

My favourite and best ever of all time friend, Jason Kenney, describes his departure from Parliament as “bittersweet” …after collecting $38,000 from his federal salary to spend the entire summer campaigning for the leadership of a provincial party:

Kenny described his departure as “bittersweet” saying he has fond memories of his time in Ottawa and will miss the issues he’s worked on, and the people he has worked on them with.

Ah, yes, the “issues he’s worked on.” Trying to impose forced-birther policies on the entire country, denying climate change, running charities dedicated to himself, and pushing for “compromise” when it comes to queer rights. At long last, he leaves federal politics and narrows his focus to merely Alberta.

END_OF_DOCUMENT_TOKEN_TO_BE_REPLACED

Jason “I don’t get caught up in the details” Kenney seems to have a rather peculiar idea of how lawmaking works. In what must be the understatement of the decade, Education Minister David Eggen described Kenney’s ideas as “poor counsel” when Kenney suggested the government “compromise” with the Baptist schools defying Bill 10:

With two Edmonton-area religious schools saying they will defy provincial law that gives students the right to form a GSA, Eggen has not ruled out withholding provincial funding to the schools if they don’t comply with the legislation.

Kenney told reporters last week that Eggen was trying to score “political points,” and said the NDP government must balance provincial law against freedom of religion and freedom of association, and should work out a compromise with the Baptist school association that oversees the private schools.

But Eggen said it’s “poor counsel” from Kenney to suggest the government compromise in following the law.

“I find it curious that someone would counsel the government to compromise on what is a very clear law that was created to protect vulnerable children, to create a safe and caring environment for kids in schools,” Eggen told reporters at McDougall Centre, where the NDP cabinet was meeting Tuesday.

Ah yes, Jason Kenney would be the expert on scoring “political points.” Just say something to the effect of “taxes bad” while collecting an MPs salary deposited into your Totally Not a Campaign Fundraiser organization for a provincial party’s leadership election. Throw in some religious feardumb and tadaa! Instant points.

Maybe I should run for the Albertan Conservatives. I’ve got their shtick figured out!

My best friends and favourite “non-partisan” group of all time ever, Parents for Choice in Education, has some… rather partisan connections.

Parents for Choice in Education also devotes a page on its website to material from Alberta Can’t Wait, the Political Action Committee set up to raise funds for the campaign of social conservative federal MP Jason Kenney to lead the Progressive Conservative Party and merge it with the Opposition Wildrose Party.

The Kenney campaign material distributed by Parents for Choice in Education accuses the NDP Government of “social engineering” – a coded reference to a supposed conspiracy to proselytize young people to take up alternative lifestyles – and attacks Education Minister David Eggen, who has stated repeatedly that the law on GSAs must be obeyed.

While claiming to be non-partisan, Parents for Choice “had a board director recently meet with Jason Kenney and she sensed that his camp has taken the time to educate themselves on the issues and is in support of parent choice,” a commentary accompanying the Alberta Can’t Wait statement approvingly noted.

END_OF_DOCUMENT_TOKEN_TO_BE_REPLACED

My best friend Jason “I don’t get caught up in the details” Kenney is running a non-profit called Unite Alberta. Is he building homes for the homeless? Fundraising for disaster relief? Providing resources for battered spouses? Starting a pro bono legal network for civil rights prosecutions? Pushing awareness for prostate cancer?

Nah. He’s financing his campaign for the leadership of the “Progressive” Conservatives without subjecting himself to oversight from regulatory bodies–because it’s not a campaign organization–it’s a “non-profit”:

When you do a corporate search and pull what’s publicly available for Unite Alberta Ltd. you see that it is a “Named Alberta Corporation” with the corporate access number 2019802210.

It’s worth pointing out that if Kenney had registered Unite Alberta as a non-profit society he would have been obligated to file his financials with Service Alberta at the end of the year and we’d be able to do more than just take Kenney at his word when it came to how much money his campaign had raised and spent. It’s a far more transparent organizational structure and one Kenney didn’t choose.

So why is Kenney saying on his website and in the media that Unite Alberta is a non-profit when it clearly isn’t? I haven’t the faintest idea but inquiries with Kenney’s legal counsel about the discrepancy went unanswered by press time.

Bah. Details. You want transparency from the same party that “misplaced” $29 billion? Ridiculous! Just more red tape to cut through!

Must be some of that good Christian charity he wants to bring to government.

When I last guessed on who would endorse Jason Kenney next, I wagered it would be a Holocaust denier.

Well, Kenney has received his next endorsement, and I was wrong:

As Kenney leads a crusade against Alberta’s policies tackling climate change, it turns out the man running Kenney’s leadership campaign was once described as a “global warming critic” by the Globe and Mail.

Oh good. Just a climate change denier. Much better than a Holocaust denier.

He’s suggested those who agree with the scientists are participating in “wacky mass-behaviour,” dismissing climate change concerns as nothing more than a “sociological phenomenon,” a “popular delusion” and yes, even as a form of “collective psychosis.”

I can’t even parody this shit. 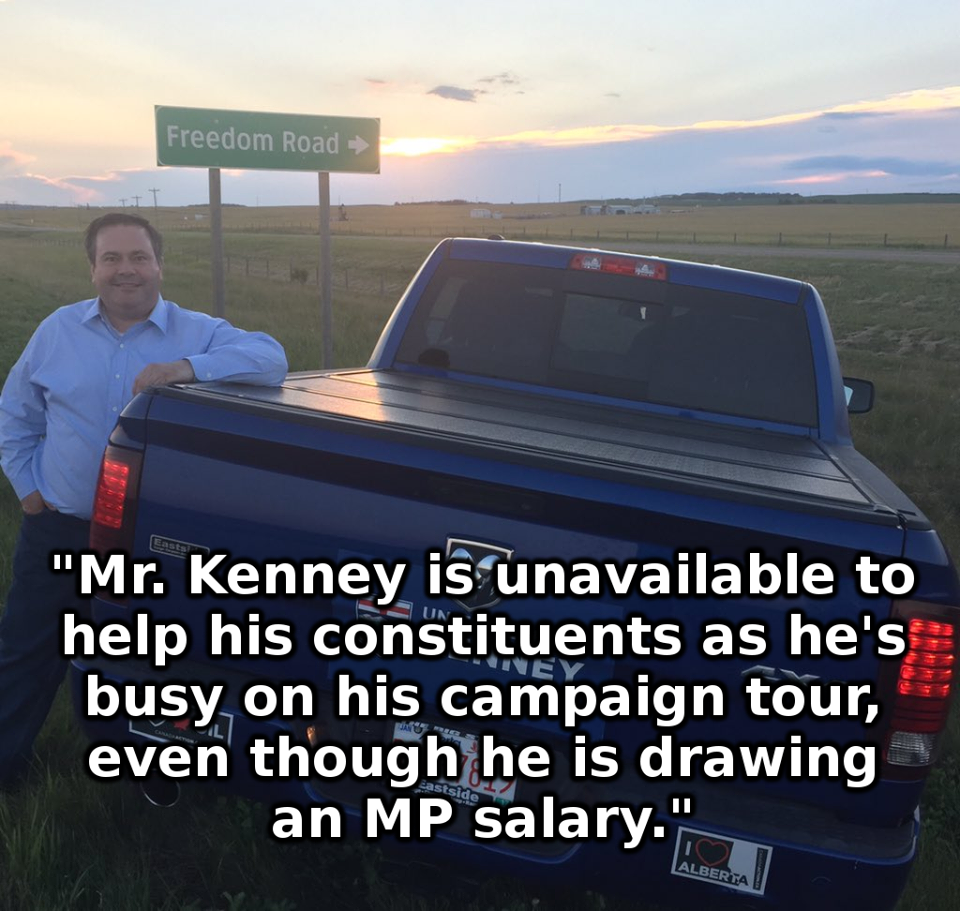 Jason “I don’t get caught up in the details” Kenney receives another endorsement from a conservative pundit, Sheila Gunn Reid. But this endorsement is a bit… erm, shall we say roundabout?

If you don’t support Jason Kenney’s bid to lead Alberta’s Progressive Conservatives, some of Kenney’s allies might launch gender-based attacks on you.

Shortly after, fellow Rebel personality Sheila Gunn Reid took to her YouTube soapbox to tar-and-feather Quest, denouncing him as a Liberal and even taunting the former MLA for losing to a “gender-queer Colombian immigrant” during the last election.

Basically, David Quest criticized Kenney’s bid for the “Progressive” Conservative leadership, citing Kenney’s history of being the political equivalent of cucumbers pickled in gasoline. So one of Kenney’s biggest fans, suspected garbage fire Sheila Gunn Reid, decided the best way to discredit Quest was by pointing out he lost his election to a, quote, “genderqueer Colombian immigrant.”

END_OF_DOCUMENT_TOKEN_TO_BE_REPLACED

Jason “I don’t get caught up in the details” Kenney, Canadian Trump-wannabe extraordinaire and prospective leader of the Albertan “Progressive” Conservatives, has a few ideas on abortion:

But now, now: Kenney claims his position on abortion has been “consistent since I first ran for Parliament in 1997,” and boldly alleges that “in my 20 years in Parliament I haven’t given a speech about this, let alone proposed a motion or a bill.”

That’s a creative interpretation of his record:

• According to Campaign Life Coalition, Jason Kenney has a perfect voting record on “life and family issues,” voting on a number of occasions in favour of legislation criticized as attempts to undermine the reproductive rights of Canadian women.

• In 2012, Jason Kenney voted in favour of Motion 312, a failed bid to redefine Canada’s legal definition of a human being, viewed by many as a backdoor to reopening the abortion debate – that motion that was even rejected by Stephen Harper.

• Kenney voted in favour of Motion 83, a failed bid to examine “the medical necessity of abortion.” In the House of Commons, Kenney delivered a speech arguing many abortions are “medically unnecessary” procedures and that with “scarce and shrinking dollars” for healthcare, tax dollars would be better spent on MRI machines.

• Kenney delivered another speech in the House of Commons claiming “the right to life” is “inalienable” because constitutional rights are “granted to us by our Creator.”

And let’s not even get into how Kenney thought a women’s group spreading awareness of abortion rights at his old university campus was in some way comparable to allowing the Ku Klux Klan, pedophiles or the Church of Satan peddle their ideas too.

This is the same guy who received a prize from Michael Gove and started the niqab manufactroversy in the last federal election. The same guy complaining about hipster communists as the true threat to Alberta?

I’d like to think that even the members of Alberta’s “Progressive” Conservatives aren’t so fucking thick as to elect Kenney.

At least we know he has the endorsement of forced-birther Alissa Golob, the woman who distributed photoshopped gore on anti-abortion pamphlets distributed when Trudeau announced his platform on abortion.

Class acts, all around.