I don’t deliberately visit Patheos often for one big reason: Portions of that network are, to put it charitably, like packets of guano flung into a ceiling fan. But lo and behold, minding my own business through an innocently conducted wikiwalk, I stumble upon the Christian theological case that trans folk are Baphomet.

I was doing some research

for an article on the statue of Baphomet which was unveiled in Detroit last weekend when I discovered some very interesting details.

For those of you who are not up to speed, the Satanic Temple unveiled a nine foot statue of Baphomet–or Satan.

As I looked at the image and read up on it I saw that the Devil is portrayed as transgender or androgynous.

The image in question, in case you’re curious: 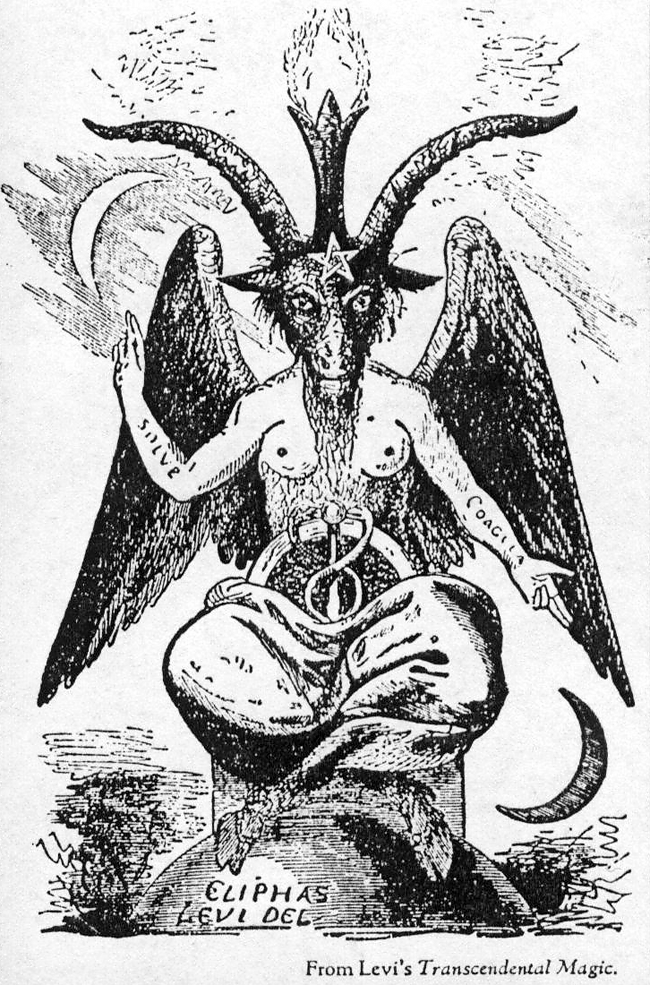 This should be good. We’re basing our argument off the fact that a particular temple in Detroit (whose explicit purpose is to troll Christian theocrats, no less) depicted the entirely fictional character of Baphomet as a goat-man with boobs. It mostly just quirks an eyebrow from me and solicits a “that’s kinda interesting, I guess.” But no, our quivering-knee’d Dwight Longenecker has a deadly serious point to make:

Rising from his lap is the pagan Caduceus–the rod with two serpents entwined that the pagan god Mercury carries. According to Satanic lore, this is a phallic symbol with the earth powers of the serpent intertwined.

The winged goat headed figure not only has male genitalia, but breasts.

Well, symbolic male genitalia, according to you.

Furthermore, when you look closely you’ll see that the beast has two arms–one male and one female.

On the arms are the Latin words “Solve” and “Coagula”. These mean “Separate” and “Come Together”. These are occult words for the task of the alchemist who takes what is integrated and natural–breaks it and then puts it back together in a new (and perverted) way.

Chemistry is PERVERTED! Are you telling me homosexuals have been recruiting from the Chemistry department THE ENTIRE TIME??

This is precisely what Satan is doing at this time with human sexuality.

He’s been talking about the gender/sex of this particular image of Baphomet but doesn’t seem to realize the whiplash he just gave me when he decided he was making a point about “human sexuality.”

That’s, uh, not even wrong.

gender confusion and “identifying” as whatever gender a person wants the distinctions between male and female are being broken and put back together however it is desired.

Not “however it is desired.” It’s being put back together in a way consistent with empirical evidence.

Bah, what am I saying? This is a theocrat we’re talking to! Don’t I have some babies to eat or something?

The celebration of “Caitlyn” Jenner

and constant publicity about this “transitioning” is a visual illustration of what is going on.

Uh, wait–now THE MEDIA is Baphomet? Make up your fucking mind, guy!

Ahhh, so like many theocrats, your research is based off of Playboy.

Can this be happening? American men are being set up to lust after another man who has artificially become a woman?

I hate to break it to you, bud, but people have been calling trans women “traps” for a loooooooooot longer than Jenner’s been around as a very-unappointed representative of the trans community.

Does that mean Caitlyn Jenner is a demon?

I’m not saying that,

No, you aren’t, you just asked it after you, you know, said that.

And that’s it! That’s the whole article!

Don’t ask me why I’m not a regular there.

Ask me anything (no, really) » « It’s the future: Non-browning apples