In the world there are thousands of edible plants. Nonetheless, the average person probably consumes only a few dozen of those on a regular basis. Lowers of processed foods probably eat even fewer than that. In grocery stores there are hundreds (or thousands, in cases of supermarkets) of items that have an ingredient list consisting of refined wheat flour, sugar, and palm oil. Or corn. Or potatoes. Or something like that, one of the few ingredients that are everywhere, in almost every ready-made food item.

Some of the rarely eaten foods are ignored for good reasons: be it poor taste or difficult harvesting process or small harvests. Thus these plants are known as edible yet seldom eaten and labelled as a “survival food” and reserved for times of famines. But many of the neglected plants are really tasty and amazing. They are ignored merely because the corporations that provide our dinners are busy producing and processing wheat, corn, and potatoes and don’t care to add new ingredients to their recipes.

Personally, I like variety in my food. I have nothing against wheat, corn, or potatoes, but at some point eating the same food every day gets boring. Food manufacturers satisfy eaters’ desire for variety by selling the same food in a different package, with different artificial flavors, colors, and shapes. But once you avoid processed foods (as I do), searching for variety by picking different ingredients for your meals becomes pretty appealing.

Without further ado, here’s one of the cool plants I like: 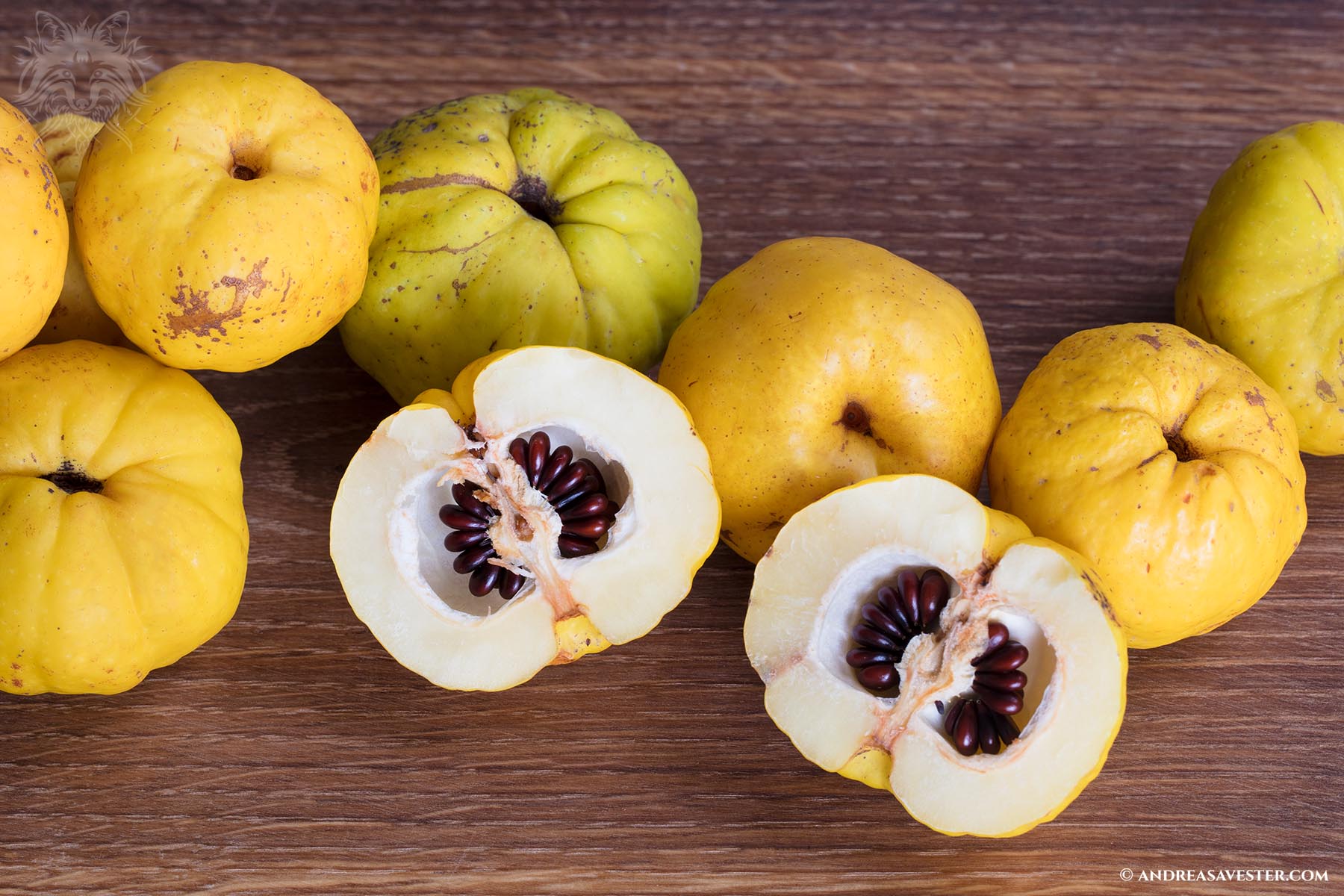 Chaenomeles japonica. This is going to be my food.

(While preparing this photo for uploading online, I had to think about how often fruit and vegetable photos are retouched in Photoshop to remove blemishes. This contributes to consumers having unrealistic expectations about how fruits and vegetables ought to look like, hence “ugly” produce ends up in the garbage so often.)

Chaenomeles japonica are generally grown as decorative plants. Their Wikipedia article barely mentions that these plants produce tasty fruits, stating that, “The fruit is edible, but hard and astringent-tasting, unless bletted. The fruit is occasionally used in jam, jelly and pie making as a substitute for its cousin, the true quince, Cydonia oblonga.” Of course, no nutritional values are given.

I dare to disagree. Japanese quince is, indeed, sour. If you are one of those people who like to munch on raw lemons (like me), you will probably love these fruits as well. Otherwise, well, yeah, they are sour. Anyway, Chaenomeles japonica fruit scent is absolutely amazing. They smell really, really nice. In Latvia they are occasionally called “Northern lemons,” because they can be used in recipes as a substitute for lemons. But we also have countless recipes for foods made from them. Jam, syrup, candied quince, and so on. We even have chocolate and cakes with pieces of quince in it. Personally, I mostly use quince in my tea blends. But I’m also more than happy to eat it with sugar in various desserts.

These shrubs are easy to grow too, this country is in hardiness zones 5a, 5b, 6a, 6b, 7a and 7b, and here Chaenomeles japonica grows well everywhere. 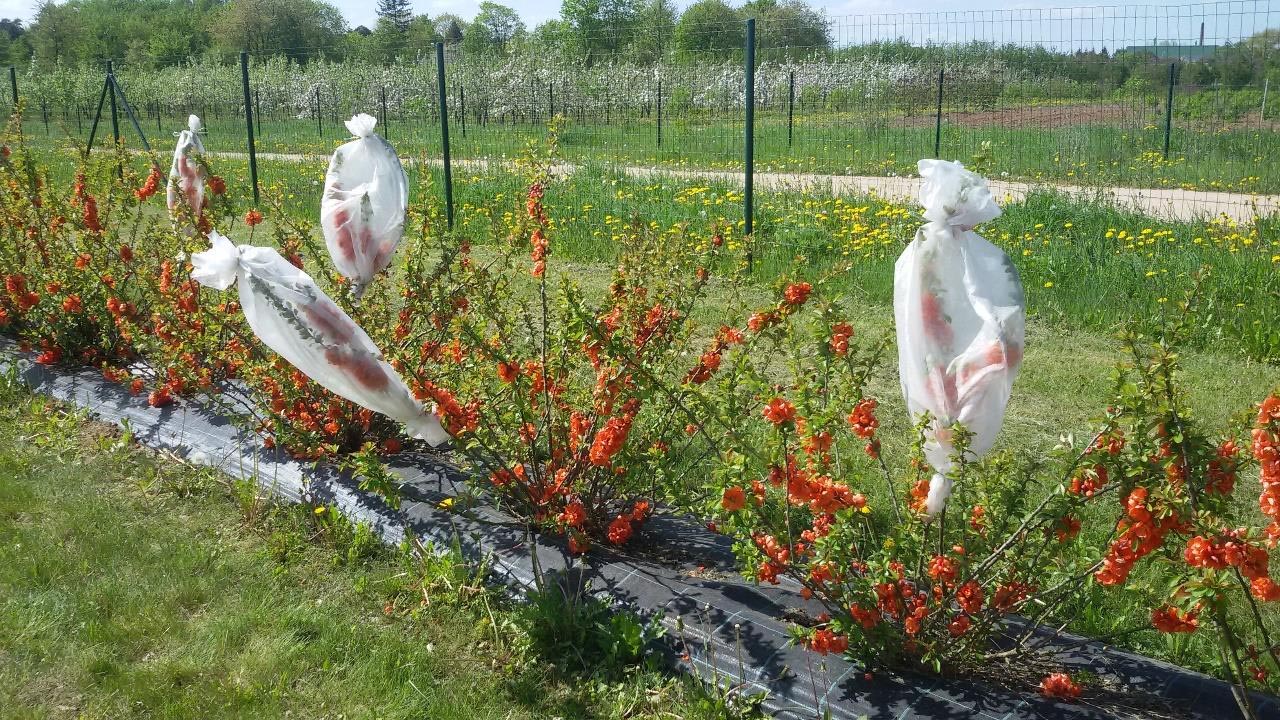 Image is from here. This photo is taken in a horticultural research institute, there are bags on some branches, because plants are tested for self-fertility.

Nowadays in Latvia Chaenomeles japonica is grown commercially. Grocery stores do not carry fresh fruits, but you can at least get them in farmers’ market during autumn. Their unusually common cultivation in this part of the world is pretty much the result of an accident. Here Japanese quince has been grown as an ornamental plant for more than a century, but it became an edible fruit after 1951. Back then, a plant nursery ordered Cydonia oblonga seeds in order to grow rootstock for grafting pear trees. In Latvian, both Cydonia oblonga and Chaenomeles japonica are called the same (“cidonijas”). Because of a mistake, said plant nursery got seeds of the wrong plant. That’s when Latvian plant breeder Alberts Tīcs started working on creating Chaenomeles japonica plants without thorns and with good quality edible fruit. He created several Japanese quince genotypes with large fruit and without thorns, but these plants were propagated with seeds.

Later, in mid 1990ties, Silvija Ruisa continued work on Japanese quince breeding in Dobele Institute of Horticulture, and in 2012 she registered the first cultivar named “Rasa.” Together with scientists from Lithuania and Sweden they created two more cultivars, “Darius” and “Rondo.” Those produce fruits that are about 30 to 50 grams, plants are thornless and winterhardy. And now that we have some Japanese quince cultivars that produce tasty fruit, people here have gotten busy growing, cooking, and eating them.

By the way, good cultivars make a huge difference. Some years ago I had a Japanese quince plant in my old garden, said plant was grown from seed, it was thorny and produced only a small amount of tiny fruits. The new cultivars are so much better.

This brings up what I consider a sad fact about modern horticulture—there are countless great plants that humans could grow if only we were willing to invest some work into creating quality cultivars. Unfortunately, people with money and resources instead focus on breeding the same old small handful of plants that we have already widely eaten for centuries or even millennia. I know countless wild plants that are edible and sufficiently tasty and could have potential to become our food. But no, too few people are interested in them, hence nobody invests time and money into creating cultivars with improved fruit size and quality.

For example, humans have spent a huge amount of time and money on creating decorative rose cultivars, but there have been very few plant breeders who instead worked on creating roses with larger fruit (rose hips are edible and tasty, they also make amazing syrup). Moreover, local plant nurseries don’t even offer for sale rose cultivars that were bred for food. If I wanted to eat rose hips, I’d have to grow wild roses.

Another example—even Korean and Siberian pines, plants from which people get pine nuts, are usually bred for decorative purposes. Do you want to plant a pretty decorative Korean pine in your backyard? Sure, pick any among hundreds of available cultivars. Do you want Korean pine nuts? Well, you can always plant some seeds that are harvested from the wild pine populations.

Of course, exceptions exist. Latvian plant breeders have created great Japanese quince cultivars with tasty fruit. Russian plant geneticists have done cool work on Actinidia kolomikta (winterhardy kiwi fruit relatives with tasty fruit, from those I have Actinidia kolomikta ‘Sentjabrskaja’ in my garden). They have also created cool rowan tree cultivars with tasty (meaning: not bitter and not astringent) berries (I grow Sorbus aucuparia x Crataegus sanguinea ‘Granatnaja’). I just wish such exceptions were more common. Even if some plant is unlikely to become the next staple food and an extra profitable cash crop, it can still be worth growing and eating, because a more varied diet is just fun. I cannot be the only person who likes to try new foods and have some variety in their meals.

By the way, if you know some tasty and rarely eaten plants that can grow in hardiness zone 4 (or maybe 5), then let me know in the comment section. I’m always looking forward to planting more edible delicacies.