Even since childhood, I have been indoctrinated that being hardworking is a virtue. Since I didn’t grow up in a religious household, I wasn’t exactly told that sloth is a sin. Nonetheless, people kept reminding me that being lazy is very bad. Yet they failed to explain why exactly it is bad for people to take things easy and enjoy life. Nor could they prove that I would benefit from all my hard work.

What’s up with all this indoctrination? Why other members of the society even care whether I am lazy or hardworking?

Here are some potential scenarios:

1. A hardworking person spends a lot of time and effort into building a nice house. Afterwards they get to live there.

2. A lazy person makes a shabby home from cheap materials and spends most of their days lazily lounging on the porch.

Both lifestyle choices concern only the person who has made these decisions. Other people shouldn’t even care how somebody wants to live. You can live as you want and leave others alone to do as they please.

Yet the indoctrination persists. How come? People don’t want others who are lazier than they to unfairly piggyback off their hard work and leech various benefits from them? Fair enough. Yet that’s not how societies work. In a society without unemployment benefits, people who don’t work don’t get any free goods either. In a society with guaranteed minimum income, lazy people will get the same free money regardless of whether they work or no. In a society in which people get unemployment benefits only for a couple of months after having lost their job, it is highly impractical for a person to choose long-term unemployment.

You would actually need a society in which unemployed people receive free money for their entire lifetime while employed people get no guaranteed minimum income before it even makes sense to accuse lazy people of freeloading. And most societies don’t have such laws.

But wait, the poorest people usually get free food from charity donations. Again: so what? If a person with spare income chooses to voluntarily donate some of this income to charities that provide free food for the poorest members of the society, where’s the problem? After all, those are voluntary donations, and nobody is forced to support freeloaders against their will.

But let’s be realistic—most “lazy” people (and I consider myself lazy, so I am speaking about those who share my lifestyle ideals) do work. They fully support themselves and don’t rely on welfare or charity donations; they merely work less than average. What was the problem with such lifestyle choices?

Here are three examples of Latvian folk songs, the stuff my teachers ordered me to learn by heart as a child:

Latvian folk songs were created back when serfdom was a thing. For my readers who are less familiar with European history, here’s a short summary from Wikipedia:

Unlike slaves, serfs could not be bought, sold, or traded individually though they could, depending on the area, be sold together with land. The kholops in Russia and villeins in gross in England, in contrast, could be traded like regular slaves, could be abused with no rights over their own bodies, could not leave the land they were bound to, and could marry only with their lord’s permission. Serfs who occupied a plot of land were required to work for the lord of the manor who owned that land. In return, they were entitled to protection, justice, and the right to cultivate certain fields within the manor to maintain their own subsistence. Serfs were often required not only to work on the lord’s fields, but also in his mines and forests and to labour to maintain roads.

To nobody’s surprise, people whose legal status was suspiciously similar to that of slaves were indoctrinated that they ought to work hard. Even after serfdom was abolished in 1861, these people’s material wellbeing didn’t improve much for many more decades, and they spent their lives as servants who owned almost nothing and cultivated other people’s land.

Why would a rational person choose to work hard when they do not get to keep the fruits of their work? Answer: there was no reason. Thus people got whipped as punishments for laziness and indoctrinated that being hardworking is a virtue and God will reward their hard work in the afterlife. Meanwhile, lords and landowners benefited from all those perpetually poor people working hard for them.

Incidentally, when I was a child, my mother taught me that I must learn to cook tasty food and diligently do all the housekeeping chores like cleaning in order to find a good husband. That was, well, odd. Why would any parent want their child to get exploited by a lazy future spouse who cannot even cook their own meals or wash their clothes? Answer: My mother, who was born in 1950ties in a rural community, was taught that men get to be picky and choose the best wife who is hardworking, keeps the house clean and neat, cooks tasty food, looks pretty, and has a pleasant personality. Meanwhile, women have to settle for any man they can find. After all, during her youth, male bachelors could have nice lives while female old maids were ridiculed by the entire community.

Only when I was already much older, I finally got exposed to literature that didn’t take for granted the idea that hard work is virtuous. Here’s an example: Anekdote zur Senkung der Arbeitsmoral, a short story by German author Heinrich Böll.

Of course, there is a problem with this German short story—it is too optimistic. It assumes that with hard work it is possible to earn a lot of money. More often than not that is not how capitalism works. 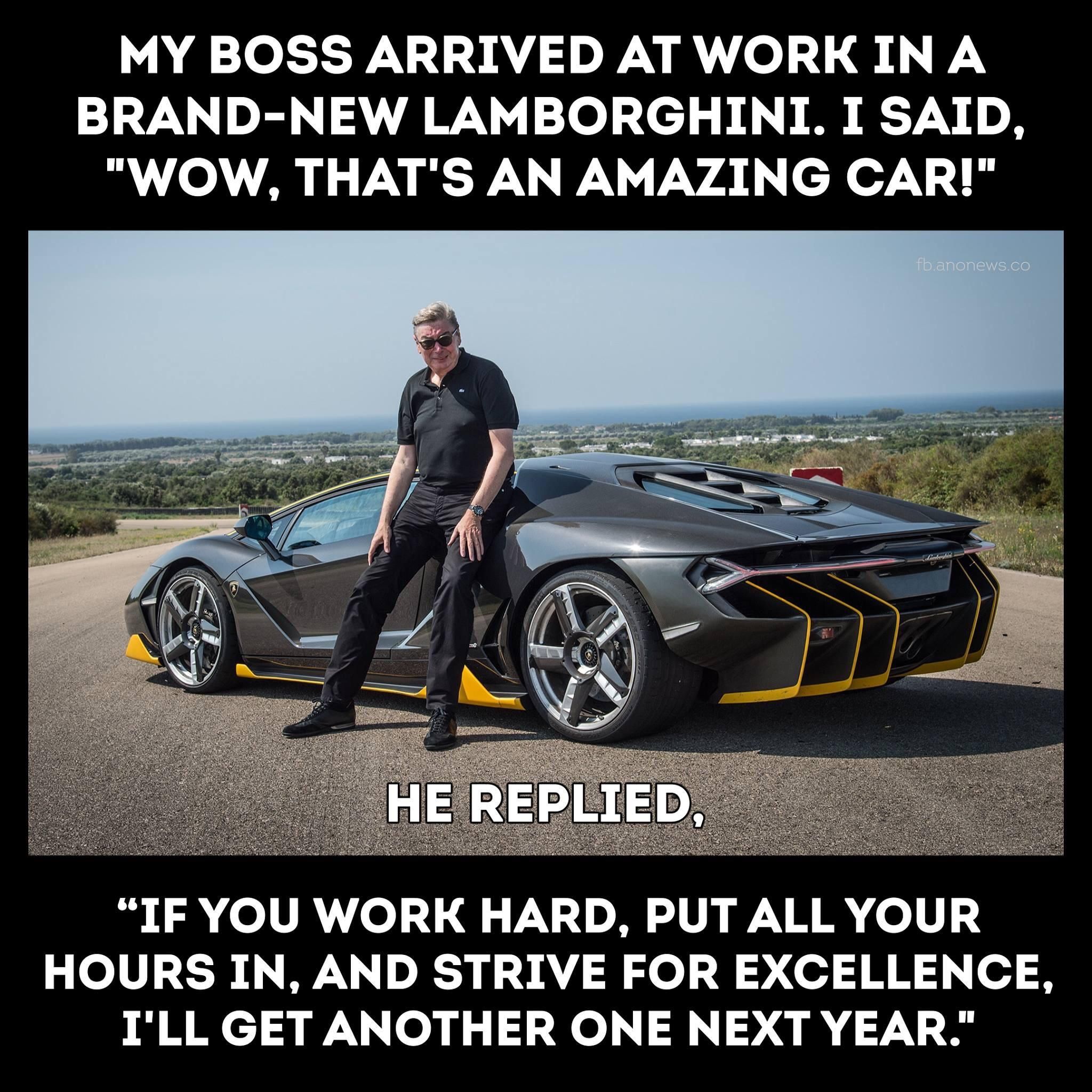 Only a minority of people, namely those who were already born privileged, have opportunities to choose careers where they get to keep the fruits of their hard work. In addition, often success in business depends on luck, and rewards aren’t proportional to how much effort a person invests in their business. More often than not, hard work does not lead to great wealth for the worker.

In addition, infinite growth and accumulation of more and more material goods is impossible on a planet with finite resources.

Some jobs can be done for as long as humans want to do them. For example, we can always create more art, write more literature. But the amount of some material goods humans can produce is limited. Natural resources are finite, and we cannot keep on building larger and larger homes with heating and air conditioning. Nor can we drive gas-guzzlers forever.

Besides, why must everybody even desire more stuff, more wealth, more material goods, a larger house, a newer car? In some hunter-gatherer societies people work for less than 20 hours per week. They spend all their free time on socializing, taking naps, singing and dancing, and just having fun. Of course, by modern standards, these people are very poor, haven’t accumulated any material wealth, even their homes are hastily made temporary constructions, but who cares as long as they are happy.

In modern society, a person is supposed to work for at least 40 hours per week. But what would happen if you decided to work for 20 hours and live with 50% less income? It can be done. Cook your own food (no, cooking is not that time-consuming), buy your clothes, electronics, and furniture in second-hand stores. If you own your home (no rent), have no loans (no interest payments), and no children, your need for money goes down immensely.

If you have a yard, expenses can be further decreased by growing part of your food. Fruit trees and berry bushes require only a few hours to plant and very little maintenance (just some light pruning in spring and mowing the lawn around them during summer). Personally, I also like to gather wild food. In my opinion, picking mushrooms is an enjoyable pastime, so I don’t count that as work.

Of course, the obvious drawback of the lifestyle I am describing is that it requires having some money as the initial investment (things get expensive quickly when you don’t already have a place to live).

Still, it is perfectly possible to comfortably get away with working much less than 40 hours per week. Since I am lazy, I have optimized my lifestyle so as to work as little as possible. For me free time for my hobbies brings more joy than owning the latest smartphone model and having lots of stuff.

So again, why was it virtuous to work hard? What’s up with this hard-work fetish some people, especially those who are religious, appear to have? And why did God aka religious authorities tell all the rubes, peasants, servants, and slaves to work hard? So that their hard work could be exploited by the wealthy elites, that’s why.