When a person enables the creation of a new helpless yet sentient living being, they should be responsible for taking care of this creature and ensuring its wellbeing. Be it a puppy, a pet rabbit or a human baby. But the question is who exactly ought to be held responsible for children—their biological parents or the society that forces people to give birth against their will?

We live in societies that force people to have biological children. Teens are denied fact-based sex education at schools. Contraceptives like condoms and hormonal birth control pills are expensive enough that poorest people cannot afford them. Sterilization surgeries are hard to obtain even for people who have money (I spent two years getting kicked out of doctors’ offices until I finally found a surgeon who agreed to surgically fix my body for a hefty sum of money that I had to pay from my pocket). Abortions are illegal is some jurisdictions and expensive in others. 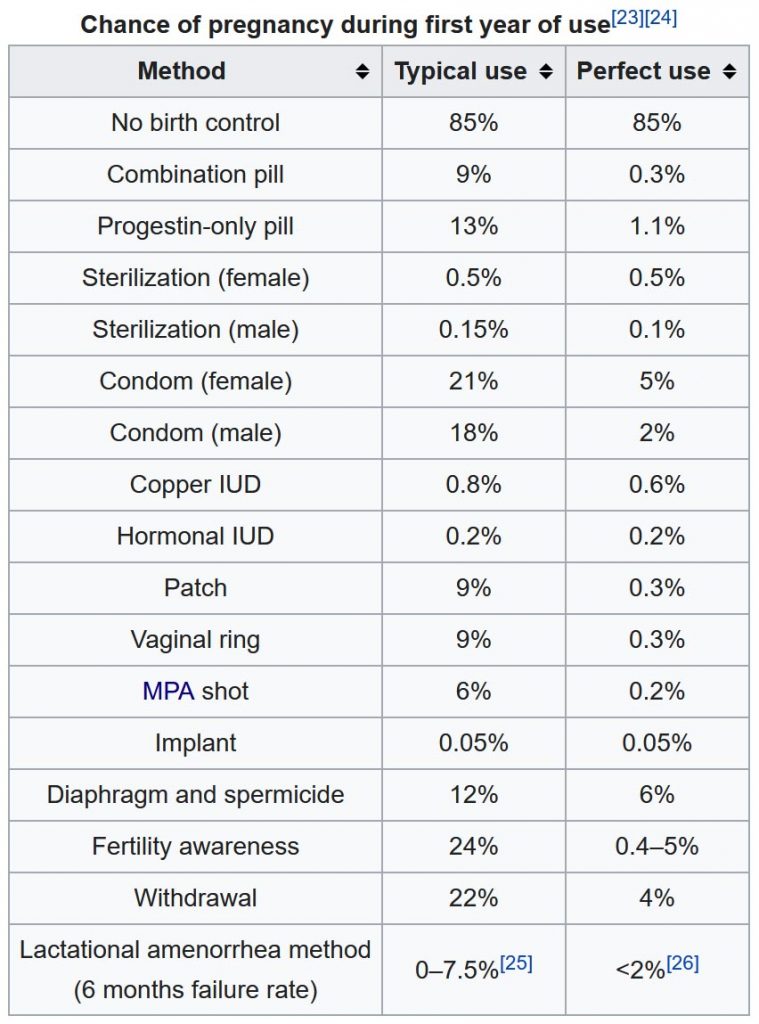 Data from Wikipedia. No birth control method is 100% safe. Thus many people who were careful and responsible and did everything correctly will need abortions anyway.

Basically, our societies, thanks to religions, deny people’s access to information and means to prevent unwanted births. Mifepristone (an abortion drug) is cheap enough to mass produce, but, no, thanks to stupid social norms, people cannot get it without paying hundreds of dollars and knowing how to pay with bitcoins.

Thus, of course, parents cannot be held responsible for their unwanted babies if they don’t even get to choose whether they want to produce a child. Forcing an immense responsibility upon a victim who got unlucky (going through an unwanted pregnancy is terrible enough in itself) is wrong. If new mothers want to abandon their babies, that’s their right. Granted, throwing out a newborn baby in a trash container would be pointless cruelty. Therefore, unwilling parents should instead leave their unwanted babies in places where they will be safely picked up so that state agencies can deal with finding somebody willing to adopt this kid. Alternatively, if poor biological parents want to raise their child but don’t have enough money, society ought to provide sufficient financial support.

If biological parents are denied choices, they cannot be held responsible for ensuring their child’s welfare either. Thus, responsibility shifts to the society in general and pro-life activists in particular.

For example, in Poland, a number of people believe that abortions should not be allowed even for fetuses with congenital birth defects. To all these people I could ask: Who will take care of all these disabled children? Are you personally willing to adopt one of them? No? Then shut the fuck up.

In fact, I am not even demanding that every pro-life activist adopts a severely disabled child and devotes all their free time and income to ensuring the best possible life quality for this kid. After all, that would be impractical—the number of babies with conditions like Down’s syndrome or spina bifida is much smaller than the number of pro-life activists. Still, I expect them to either take responsibility of all these babies or shut up.

While I cannot reasonably ask every pro-lifer to adopt some unwanted child, I do believe that every pro-lifer ought to happily pay large taxes, support free healthcare for pregnant people and children, support free university education, free food for children from impoverished families, etc. You wanted these babies to be born against their biological parents’ will? Now open your wallet and pay to ensure that these children get good life quality.

Essentially, forced birthers want all the goodies with none of the responsibilities just like kids who say, “I want a puppy but I don’t want to deal with dog poop or take said dog for walks every day also when it is raining or snowing.” These people want all fetuses to be carried to full term and more babies to be born yet they seem blissfully unconcerned about the wellbeing and life quality of these children after their birth. The moment a fetus is born, they just stop caring about it and want somebody else to shoulder the financial burden of raising a child.

All life is sacred. Until it is out of the womb at which point said life is welcome to suffer from malnutrition, lack of healthcare, or no access to education. As they say: “Be glad that you are alive. You wanted also good life quality? Fuck you!”

Also, what’s up with this desire for more babies in your society? Do all existing children have good life quality? Are their material and emotional needs met? Are there loving foster parents for every child that wasn’t wanted by their biological parents? Can the state provide help for all the families in which parents suffer from problems like addictions or substance abuse or in which any form of child abuse/neglect exists? Or maybe orphanages and abusive dysfunctional families exist? If so, then why deny access to abortions to people who don’t even want to have a child? Once another kid is born, who will take care of it? Personally, I have pretty high standards for what kind of life all children ought to have: loving parents, healthy food, healthcare, education, toys, access to various pastimes that aid their development like music or art schools, etc. And if parents (or society) cannot provide healthy environment for child’s development, then not creating a new child is a wiser decision.

Here’s the problem: The same conservative people who oppose abortions, in general, also oppose social welfare, child benefits, free healthcare or education for kids, or free healthcare for pregnant women. They even use the term “welfare mom” is a derogatory slur for (usually not married) women with multiple children who do not work and instead “create babies one after another in order to get more welfare benefits.”

First you deny poor people access to birth control and abortions and afterwards you complain that they create a lot of babies they cannot financially support on their own? Hmm.

The bottom line: According to conservatives, poor people should not have sex. Well, technically, gay or lesbian sex cannot produce babies, but conservative people perceive gay sex as filthy. I guess they just want poor people to not have any sex at all?

But wait, when people remain single for their entire lives and do not marry, that’s also frowned upon by conservatives. Thus, people should marry (somebody of the other sex, gay marriage being seen as bad). So people have to marry but have no sex with their spouse? But wait, when a woman is married, according to conservatives, she owes her husband sex. Conservative people will even say that providing sex is a wife’s duty, even if she is not in a mood for sex. But if poor people have to marry and have to have heterosexual sex and they cannot have access to birth control or abortions… That means babies.

And if a baby is born, then somebody has to ensure good life quality for this newborn person… Ouch.

There are some problems with the conservative mindset.

I have even heard from conservative people the following idea: “All methods of contraception aren’t completely safe. Abortions must be banned. Thus, if you don’t want babies, don’t have sex.”

But what if I want to remain childfree for my entire life. Does that mean lifelong celibacy? That’s seriously inconvenient for non-asexual heterosexual people. It’s inconvenient even for bisexual people. They can try to only date people of the same sex only to someday fall in love with somebody whose body can produce a child together with them.

Here we go back to forced-birther ideas—whether you want children or no, you will have to have them. At least that’s the kind of world these people want.

Pro-life activists use two kinds of arguments that attempt to justify their desired abortion bans: (1) “save the babies” and (2) “punish the slut.”

If a person genuinely wants to reduce the number of abortions, they should advocate for fact-based sex education for teens and free (or at least cheap) contraceptives. That actually works. Abortion bans do not reliably reduce the number of abortions anyway. Desperate people will always seek illegal back-alley options. Abortion bans only cause suffering and threaten pregnant people’s health and lives.

As for “punishing the sluts,” the entire idea of a baby as punishment is just so twisted and sick. Basically: “We can’t let sluts get away with free pleasure devoid of consequences, so let’s ban abortions. That will teach them a lesson and make them embrace chastity. Or else they will suffer the consequences and pay the price for their lewdness.” Even if conservative people want sexually active adults to suffer, how do they think it makes a child feel to know that their parents didn’t want them? All children ought to be wanted and loved; they shouldn’t be seen as God’s punishment for promiscuity. They shouldn’t be used as a threat to produce fear and coerce adults into practicing sexual abstinence.

Back when I was a teen, during a sex education lesson at school, the teacher told us that people who have multiple abortions during their lifetime are irresponsible and have some problems with their heads. But really, with typical use, a person who uses hormonal birth control pills has a 9% probability to get pregnant during the first year of use. And that’s just one year. They are rolling the dice again and again, year after year. The probability to need multiple abortions during your lifetime is pretty high even for a person who diligently uses birth control. Shaming people who need abortions is just classical victim-blaming.

Due to random chance, some people get unlucky and experience an unwanted pregnancy. But others, those who are the rest of the society, want to believe that they are in control of their own lives, they want to think that such misfortune cannot happen to them, so they blame the victims so as to assure themselves that all unlucky people must have been careless, and since they are careful with their pills or condoms, such bad luck cannot happen to them. But it really is just bad luck. With a 9% probability to get unlucky every year, some people are statistically bound to just have bad luck.

Ultimately, people must have a choice to decide what happens with their bodies. Fetuses are non-sentient anyway. It is pregnant people who have a capability to suffer. And unwanted pregnancies cause plenty of suffering—both physical and emotional pain.

Forced birthers should just recognize their hypocritical attitudes and shut up.

Ultimately, I still think that the society should financially support impoverished parents. There should be free healthcare, free food, and free education for children who need it. I want this primarily for the sake of children rather than for the sake of making struggling poor parents’ lives easier (though the latter is also a nice additional benefit). A child is innocent, cannot choose their parents, and doesn’t deserve the suffering of growing up in poverty. No child deserves to be deprived of food, healthcare or education just because their parents cannot afford to pay for it.