It’s July now. The month in which people are reminded that they could try to reduce the amount of waste they create. Plastic Free July challenge encourages people to refuse single-use plastics in July (and beyond). The idea is that people can experiment with ways how to reduce the amount of plastic waste they create, find great alternatives for disposable goods, and hopefully also develop some new and better lifestyle habits.

What can you do? Here is a list of some basic ideas you can try. And in this blog post I have already written about how individuals can try to reduce the amount of waste they create. Basically, avoid single-use plastic packaging for the goods you buy, refuse takeaway items (plastic bags, bottles, straws, coffee cups), replace single-use items with reusable items (for example, safety razors and glass straws instead of plastic equivalents).

And here’s a picture with a summery of various things you can try to live with less waste: 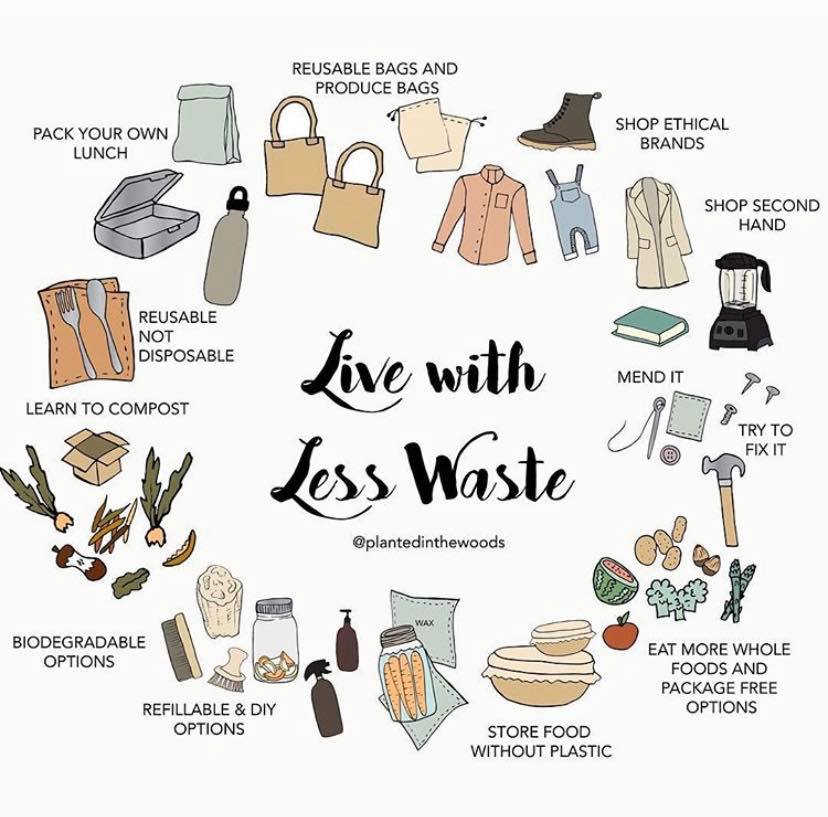 How to Live with Less Waste

Incidentally, “plastic free” and “zero waste” are aspirational rather than realistic terms. For practical purposes, a completely plastic free life is pretty much impossible. All electronics, bicycles, cars, public transport, etc. contain plastic components. When people talk about living “plastic free,” their goal isn’t eliminating all traces of plastic goods from their life, instead their goal is to stop dumping plastic trash in their waste bins and to reduce the demand for newly made plastic goods, especially single use plastic goods. Similarly, “zero waste” is also aspirational, in reality the goal is to live with less waste. It’s up to every person to figure out what constitutes “less waste” for them, because our individual life circumstances determine how we can or cannot live.

I have already written about how to live with less waste, so this time I’ll instead discuss reasons why somebody should bother doing this in the first place.

Plastic pollution is a huge problem. Firstly, nonrenewable resources were used in order to produce that drinking water bottle you used once and threw out immediately afterwards.

Secondly, plastics cause harm upon becoming trash. Recycling is possible only for some types of plastics, thus only a fraction of all the plastics are collected and recycled or more commonly—downcycled. Most plastic items simply end up in landfills or oceans.

Or they get shipped to some of the poorest countries on this planet. Wealthy countries do not want to deal with their own trash, so they just put it on ships and dump it on impoverished communities in other continents.

Sorting your trash is better than nothing, but recycling simply cannot be a solution for the humanity’s waste problem. Instead we must stop creating waste in the first place.

People often say that their individual efforts to live with less waste are near pointless—a single person cannot make a difference. That’s somewhat true when we have billions of tons of trash, one person cannot put a large dent in that number.

Moreover, what a single person can or cannot do depends on their community. If there are no grocery stores with bulk bins next to their home, if all the fruits and vegetables in nearby grocery stores are packaged in plastics, if restaurants in their neighborhood use exclusively plastic food containers, then a person who might want to create less waste has little choice and they cannot do much about their environmentally harmful lifestyle habits.

Of course, everybody can always do at least something. Shopping bags can be reused (and if you cannot afford a nice fabric shopping bag, plastic bags can be reused at least a few times). You can drink tap water and carry around your own water bottle. And if tap water is not safe to drink where you live, you can at least choose to buy water in large bottles rather than tiny ones (thus needing less plastic packaging by weight).

Still, ultimately what people can buy depends on what shop owners choose to put on shop shelves. So should we instead focus on businesses who produce the goods we use?

Believe it or not, once again it is complicated. For example, I have spoken with a Latvian small business owner who talked about her struggles trying to produce and sell food with less packaging. She wanted to sell less wasteful products, unfortunately, it was hard.

Nowadays instead we have hundreds of different glass container shapes. Every food manufacturer wants their own uniquely shaped food container for some stupid marketing purposes. And if one small business wants to reuse glass jars, then shoppers must bring only these uniquely shaped jars to the exact store where they purchased some food. More importantly, this small business must wash these jars themselves, and the chances are that they do not have automated machines that can do it. Thus it is cheaper to buy new glass jars than to collect and wash the existing ones.

I have also spoken with owners of local zero waste stores who talked about the problems associated with getting food from the manufacturer to the store. Many large food manufacturers are willing to ship their products also to small grocery stores. Unfortunately, most are unwilling to reuse packaging. Getting some pasta from the manufacturer to the store in 20 kg plastic bags and then from the store to the individual household in reusable containers is better than the standard delivery chain in which everything is packaged in 0.5 kg plastic bags, but there’s still some waste.

On top of that, a store cannot possibly sell food without packaging unless in their neighborhood there are enough people who want to go shopping with their own empty containers. Without clients, a business cannot function. Unfortunately, in zero waste stores many foods end up being more expensive than in large supermarket chains, because they are a small shop. This is already a problem, thus zero waste stores often market themselves as “health food” stores to attract more customers. There are two zero waste stores in a walking distance from my home. Both of them offer single use paper bags for those customers who have forgotten to bring their own empty containers.

Ultimately, small businesses can do whatever they want, but current consumption and waste production trends won’t noticeably shift unless large corporations agree to participate. For every zero waste grocery store there are hundreds of conventional supermarkets where everything is wrapped in plastics. And corporations do not want to change their practices in cases where it increases costs. Often dealing with bulk bins is more expensive for a business than throwing out single use plastic packaging. Bulk bins must be refilled and washed, the contents that spill from them must be cleaned from the floor. A shop must also deal with weighting food, printing barcodes, and dealing with shoppers who will inevitably mess something up.

Another problem businesses have to deal with are consumer expectations. Some shoppers want their stuff to come is fancy looking and pretty packaging. They will frown upon plain brown recycled paper or similar plain and visually unappealing packaging and pick a competitor’s product that is unnecessarily overpackaged.

Thus individual actions of consumers and business owners have limited efficiency. So we need new legislature. Basically, environmentally harmful items and practices must be either banned or heavily taxed. Otherwise there will be little change.

Another problem is that recycling plastics is hard due to there being so many kinds of it (with even more various additives). This makes it harder to sort and recycle post-consumer plastic items. States could impose limitations on what kinds of plastics can be used for what purposes.

For example, recently I spotted a protein drink in a PVC bottle on the shelf of a local grocery store. PVC is impossible to recycle. Why did the manufacturer choose to use PVC rather than PET or something else than can be recycled? Well, PVC is cheap and they clearly didn’t give a damn about their products’ environmental impact. There would be two ways how to discourage such practices. One option is to put a noticeable tax on non-recycleable packaging so that manufacturers are forced to choose the environmentally better option is order to save money. The other option is to outright ban the use of PVC and other nonrecycleable plastics for packaging. This goes also for packaging made from composite materials that cannot be recycled. Either ban it or tax it heavily.

States could also enforce standards. For example, instead of there being hundreds of different wine bottles, it could be possible to pass laws mandating that all wine bottles must be the same in order to make it possible to wash and reuse them. The current system of recycling packaging is not an adequate long-term solution to waste issues, we need laws to make sure that less waste gets produced in the first place.

Unfortunately, politicians do not want to suggest new laws that would be frowned upon by their voters. In most countries a significant portion of the population dislike the hassle of having to reuse bags or containers, hence they oppose bans on various convenient items like plastic bags. In some countries (the USA) people even manage to turn this into a question of their social identity and liberty. After all, we are talking about a country in which rolling coal is a thing, anti-environmentalism is widespread, and some people engage in conspicuous pollution for entertainment or for protest.

So here we are—stuck in a terrible situation that is hard to fix. So why do I bother walking around with my own reusable shopping bags and food containers? Firstly, I do not like the idea of leaving a trail of trash behind me. I have little hopes of succeeding in making the world a better place (I’m a pessimist), but I at least don’t want to make things worse.

Secondly, I know some people who would be willing to use reusable bags and containers in their daily life, but they don’t do it due to feeling embarrassed or fearing social disapproval. They don’t want their neighbors or their grocer/butcher/fishmonger to perceive them as extremists for doing something weird. By doing something unusual I contribute to making environmentally friendlier choices more socially accepted and expected. If environmentally conscious behavior and attitudes became widespread, politicians and businesses would be more likely to do something about the problem.

By the way, a sad side note: websites that offer resources on how to live with less waste often also tend to push various dubious and pseudoscientific ideas. I mean the usual crap: claiming that conventional foods are dangerous due to toxic pesticides and that therefore you have to buy overpriced organic food (I have written about this problem before). Or that all plastics are inherently and utterly horrible and will poison your food by leaching toxins (this is plain false; also cue promotions for scams from the detox industry). Never mind natural healing and alternative medicine (aka scams), “natural food” (whatever the hell that even means), and so on. Beware!