Once the forge body is all assembled, the next problem is to see if it can get hot enough to weld in. The whole exercise is completely pointless if you can’t use the thing for its intended purpose.

Around about this point I began to worry about thermal mass. Anything you’re heating up that’s not your work-piece is wasted heat, sucked of the interior of the forge by Maxwell’s demon. But we’re in the land of unknowns, here: it may be that there’s too much cement, or something like that. There’s a lot of cement. Here’s another thing: there’s always still moisture in the cement so when you light it, a lot of heat is carried away in the form of steam until the cement is dry. There are a lot of variables and the only thing we can do is try: 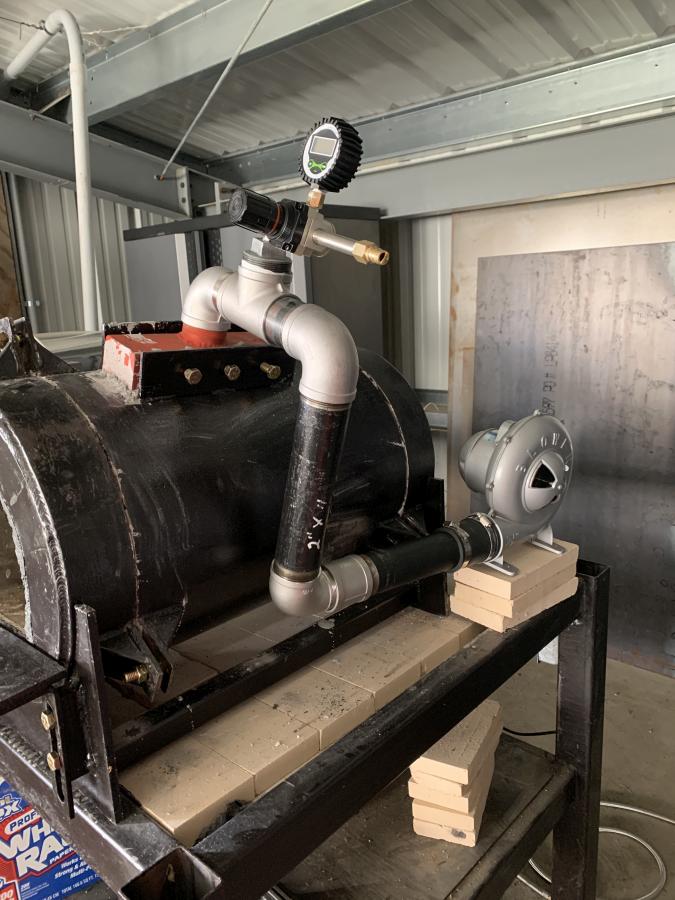 There have been several versions of this, and there may be another someday. The current version has the injector moved down to be next to the fan.

Let’s look at this in reverse order:

The fan – that’s a classic blacksmith’s electric blower fan. It makes a good solid wind, suitable for blacksmithing. I figured the adapter, which is a pipe repair collar I managed to slide over both ends; it works great. Then, some plumbing. At the top is the propane injector. The injector is nothing magical – it just dumps propane into the air-flow headed toward the ribbon burner. Plenty of mixing happens up on the red plenum on top of the burner, but some forge-builders feel that the injector jet matters, or the mixing matters. Experimentally, I have moved the injector down near the fan (no difference, but I like having it away from the upper part of the forge anyway) It’s pretty simple: if there’s too much propane, you can smell propane, which means WARNING WARNING WARNING time to re-figure things. If the burner hiccups then it means there’s not enough air. If it goes out, it means there’s too much air. Once you find a combination of controls that works, you leave it alone. 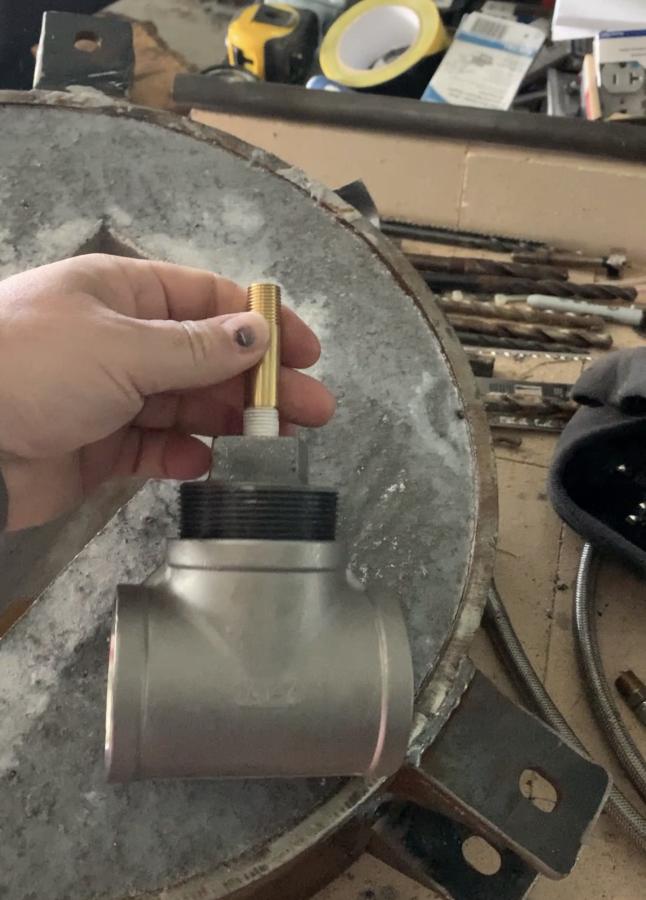 Later, I threaded the inside of the cap, too, so a nipple could be threaded into the reverse end, with an end-cap on it with a couple of holes drilled into it. The forge was running too rich and I was hoping I could get enough back-pressure on the line that the pressure gauge would work. It didn’t. So, I have no idea what propane pressure I am using though it seems to me to be less than my old forge used.

My old forge had “venturi style” burners – burners where the force of the propane jetting into a semi-enclosed place, causes the air to mix for ignition. They burn very cleanly and hot, but they’re not even in the ballpark of a “blown” forge with a fan providing 3-4 times as much air as the venturis. In principle, ribbon burner forges can run much more efficiently. They don’t, however, run cooler.

For curiosity’s sake I made a small variety of injectors, and tried them, and as far as I can tell it makes no difference. Let’s hear it for science!

At the right end of the regulator cluster you can see a weird thingie. That’s a quick-connect propane connector; it’s pretty neat – you can disconnect it while the propane is on full pressure and it closes the line. It leaks a little but, seriously, if you need an emergency one-hand disconnect, it’s great. It also means you can throw the disconnected line onto the floor (where it’s cool) away from the action. Seems like $35 well spent. None of the propane lines need to be able to hold high pressure once you’re past the quick connect, though I’ve bubble-tested everything and it’s all tight.

Time to light it:

The usual process for lighting a forge is to light a paper towel and throw that into the maw, then hit the gas. So, I did that. Then, I remembered that I hadn’t turned the air blower on, yet, so there was probably propane building up in the line, waiting to eventually reach the flames and explode. So, I turned on the fan.

Once  had that all sorted out, I was able to twiddle the various air/fuel settings and get some pretty pretty flames. Then, the question was “will the forge reach welding temperature?”

There were some other problems. Because it’s pressurized, the area in front of the maw is a sort of death-beam of heat. If you reach to get something, even with 3-foot tongs, you’ll burn all the air off your arm if you’re not wearing gloves. It’s interesting because that forces the user to be very judicious about where they place objects and how they will be able to grab them quickly with tongs. It’s challenges layered on challenges.

I made up a chunk of wire rope and tried to weld it: no dice. That depressed me. But there was still a lot of steam coming off the forge body. And, it was “singing” – a kind of high pitched pulsing scream. I reasoned (correctly) that it might be a result of resonance because the fuel/air mix was not burning evenly, so I re-plumbed the whole feed system to place the injector down near the fan. Problem solved. I sounded creepy and “creepy” is not the vibe I wanted. 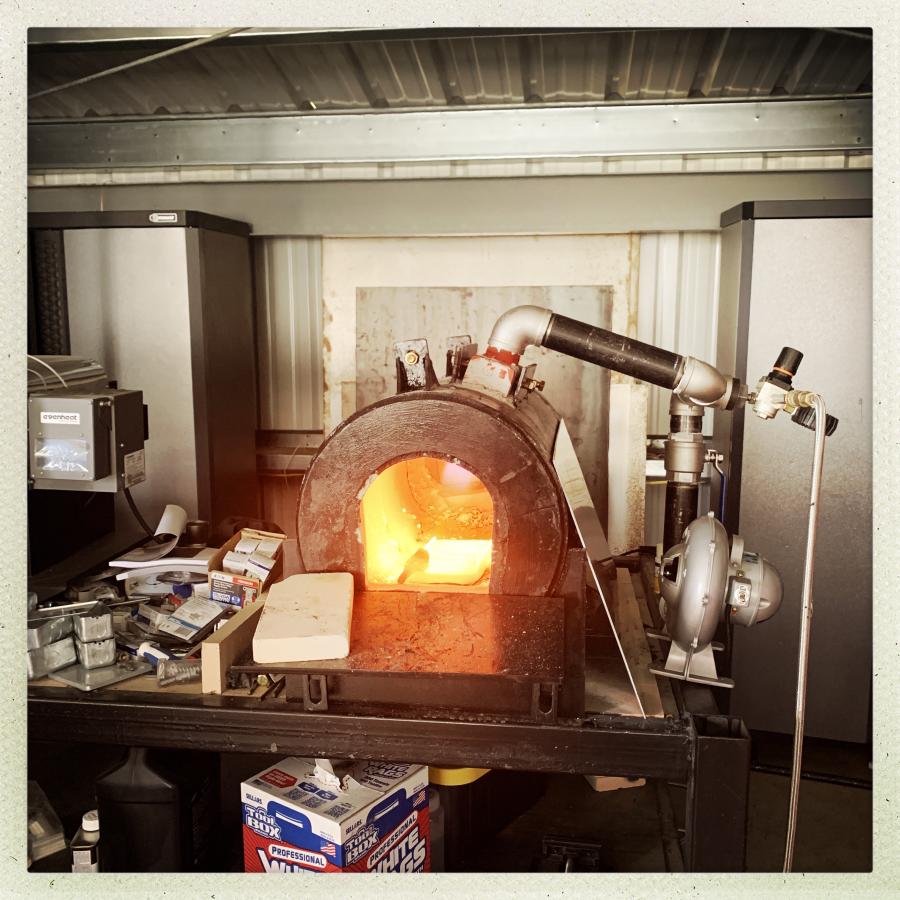 That bright yellow heat is what you want! Yesterday, I made up a block of 1095 and 15n20 alternating strips, tack welded them together, and forge-welded them into a pretty nice-looking bar, which I then twisted and squared up. It’s in the annealing bin right now, but today I will take it over to Mr Happy Dancing Bandsaw and see if the welds look clean. If they are, I will section it up and make some knives out of it!

There’s still a bit of work to do on the thing. You can see a plate of aluminum resting against the right side. I plan to make some stand-offs (center-tapped) and weld them to the side, then mount the aluminum to serve as a heat shield. This thing badly needs an exhaust hood – it projects unbearable heat straight out the front. For now, I’m happy and I can forge things again!

Instagram has a filter that adds fire to images or video. Naturally, I thought “what would it do with something that was really on fire already?” 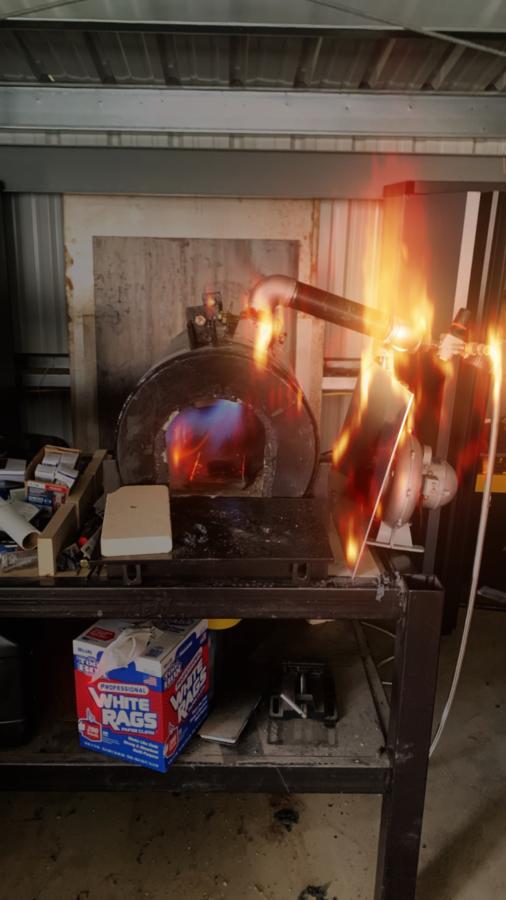 Look at the the way the propane feed line is burning! Holy crap! RUN!

Uploading the video to youtube was a fountain of irritation. Needless to say, youtube detected patterns in the music I used and sent me a message to the effect “assclam has a copyright claim on this music, continue?” Yes. “They will be able to monetize your video, continue?” So I had to file a signed statement to the effect that Carmina Burana, which was written in 1939, is out of copyright. The video will probably be pulled (I know the performance is still under its copyright, but I’m pretty sure some internet assclam does not hold the copyright to that performance, Warner Brothers does because Warner Brothers owns all the music.) Someone please explain to me again how capitalism helps make our world better by giving everyone access to all the music?

We Only See the Slight Echoes » « Things That Happened