“Oroshigane” is the Japanese word for “shop metal” – steel that is home-brewed from whatever the smith decides is interesting.

I believe that this technique is similar to the process that results in steel known as “wootz” – the original ‘Damascus’ steel which we now know resulted from the silk road trade route carrying various forms of steel to places where they were smelted down, together, and the steel produced took on a subtle ripply look as a result of imperfect mixing of the various elements alloyed into the billet. Put another way: you take some brake drum, a bit of exhaust pipe, and some railroad track and a bunch of carbon and melt it down, then maybe you wind up with a usable carbon steel.

Being familiar, in principle, with a process does not mean the same thing as having done it. So tomorrow I’m headed out to Oregon (Bandon) to Dragonfly Forge, to see if I can make some orishigane and make a decent blade out of it. It’s going to be a busy week and I don’t really know how things will come out other than that, in theory, this should all work fine. As dad says, “in practice, things are harder than in theory.” 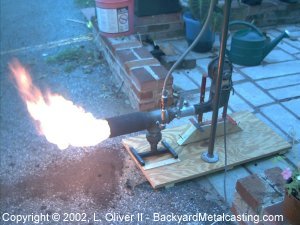 A waste oil burner; I just grabbed this off a google image search. Looks pretty typical – an air pipe with an atomizer in it, and a heat collar to ignite the atomized diesel fuel once it’s oxygenated. This is all low risk stuff as long as you keep the O2 tank away. In the picture, the air pressurizer fan is not running or that flame would be bright blue and pointing off the screen.

I have the body of a steel smelter I’ve been (slowly, with many interruptions) building. It’s actually come along a fair way, so this class is timely – I may learn I’ve been haring off in the wrong direction. Or, maybe not. But smelters are a really interesting problem. You need to make them out of something that can handle a lot of heat and not melt or oxidize. And they have to be able to withstand thermal cycles that make many things crumble to dust. Then, you need a heat source. The obvious (and expensive and dangerous) one is oxygen/acetylene – that will turn pretty much anything to a puddle and, as they say “a puddle is welded.” Anyhow, I’ve been thinking about jet burners off and on for a while and that’s another piece of the puzzle: I have a design, it’s in my head. I have steel and a metal lathe. I had hoped to bring a prototype of my burner out to Oregon with me, but I kept coming up with better ways to make it, and/or I didn’t have the right tooling for the lathe, so it has proceeded in fits and spurts but I have nothing to show for it except I’m going to do some hand-waving. Anyhow: a lot of home-built burners are pretty frightful things, that look like a plumber went mad with frustration and decided to mix things up a bit. You’ve got Y-pipes and atomizers welded so they come into other pipes from the side, and so forth. I rearranged all the components around the idea that the burner body itself fits inside the air pipe, supported by two smaller connectors that carry pressurized air and diesel fuel. There’s a crazy fellow in Australia who uses propane for the pressure to atomize the diesel fuel and I just don’t like that idea much. There’s another guy who uses a compressor and a y-connector attached to an oxygen tank, so he can bleed in just a bit of oxygen in case things aren’t exploding violently enough. Anyway, I’ll be very happy to see how sensei generates the heat for the smelter we’ll be using. It would have been fun to bring a bomb of my own but if it didn’t work that’d be embarrassing, and if it did work then I’d be being obnoxious.

I’ll be posting write-ups when I can about what I’m up to, but like usual, I’ll be mostly busy at class and may be too tired to sit down and whack away at the laptop.

This is going to be ever so much less depressing than reading about the start of World War III, and watching the climate crisis and humanity’s pathetic response to the pandemic as the world slides into authoritarianism. I’m going to ignore the news for a whole week, more or less.

Morale Check » « A Convoy of Dunces