It took a remarkable amount of time to smear three coats of paint on the doors.

Then, it was a matter of sandwiching the fiberglass, which I cut to size with a circular saw. Cutting fiberglass sheet is really unpleasant and you come home with pieces of glass in your hair, shirt pockets, etc. You can’t wipe it off, because that can just drive the shreds into your flesh. When I got home I stripped my clothes off in the yard and came back later to shake them out and get them into the washing machine.

To assemble the sides, I positioned everything carefully, then put clamps at the corners and used a 5th clamp to tighten each region before I put a screw in it. When the screws hit the fiberglass, the top piece would sometimes crawl up the screw, which effectively disassembled the region. Clamping it solved that problem and I did not have to pre-drill a hole. Getting holes in the edge of the fiberglass made the upper part of the door get side-to-side stiff, so the whole thing felt much stronger and straighter when it was done. 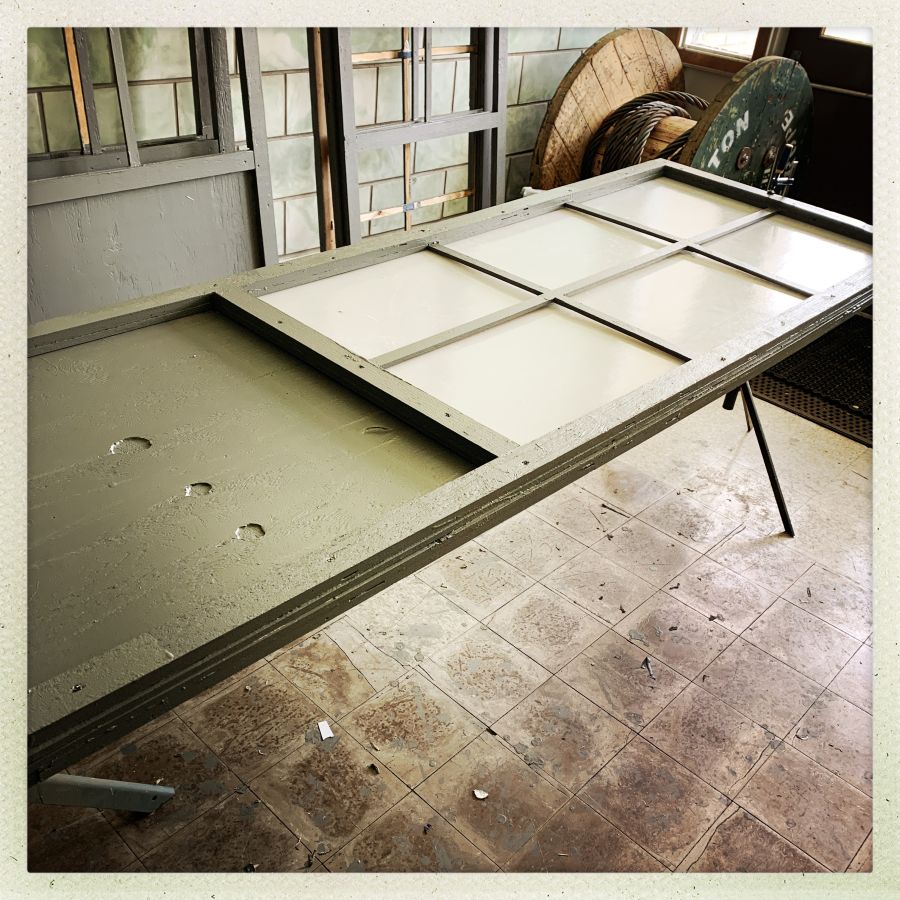 The doors are supported on steel jack-stands I bought from Uline back in the 90s. They have been some of the most useful tools I’ve ever purchased – they’re basically a variable-height sawhorse that can support a truck. I’ve sawed them, accidentally, and it’s loud. I’ve shot one of them with a .308 (did not penetrate!) and I’ve drooled paint all over them.

I’m down to about 2 cups of paint, which I have been using to cover screw-holes and edges. But, basically, it’s done. 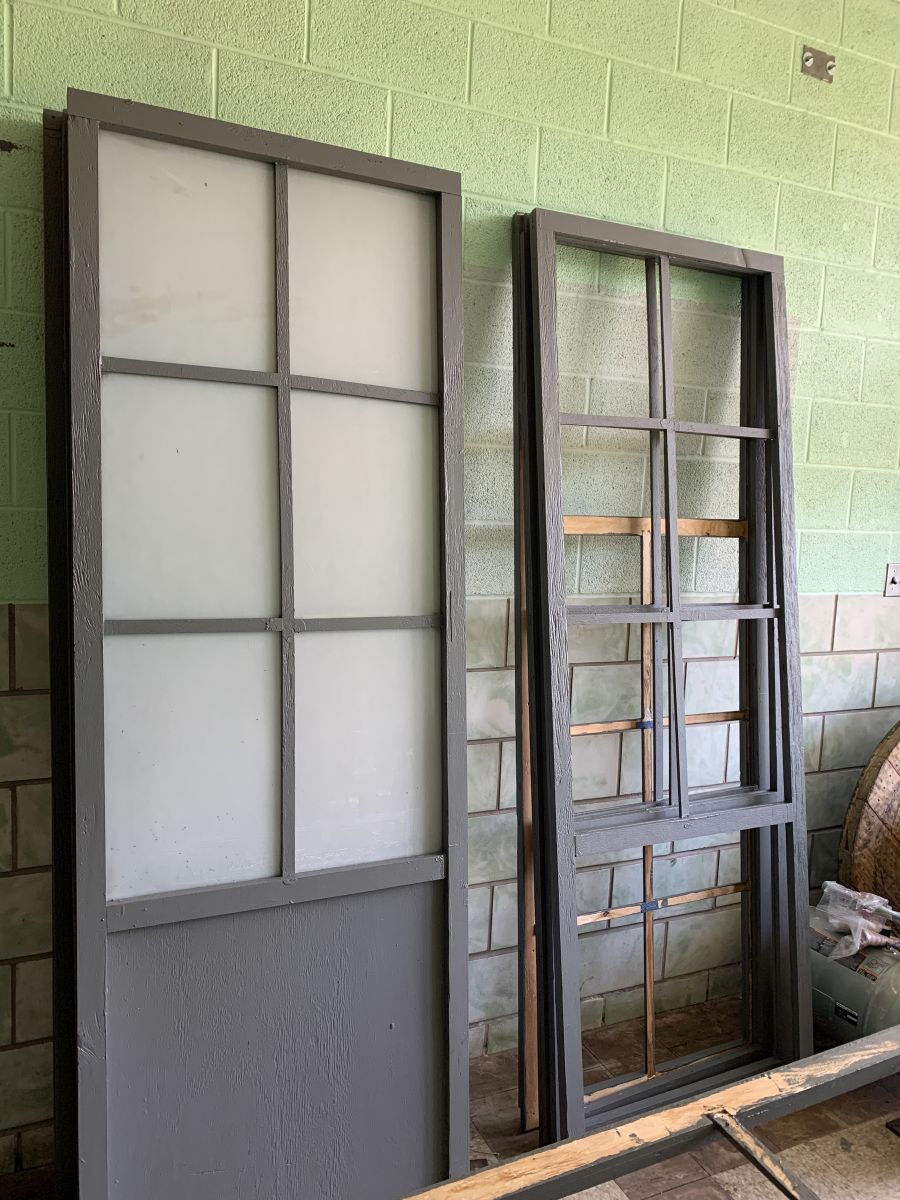 If you look at the intersection of the lattice on the left, you can see what the urethane glue/linen join looks like after it has a few coats of paint on it. It looks fragile but it’s 1/2″ plywood. Each door weighs about 30lb.

I made one embarrassing mistake. My original design dimensions called for 5 doors that were each wider and would cover the same distance. I thought that narrower would look better (it does!) so that made 6 doors. Naturally, I had 5 pieces of fiberglass. 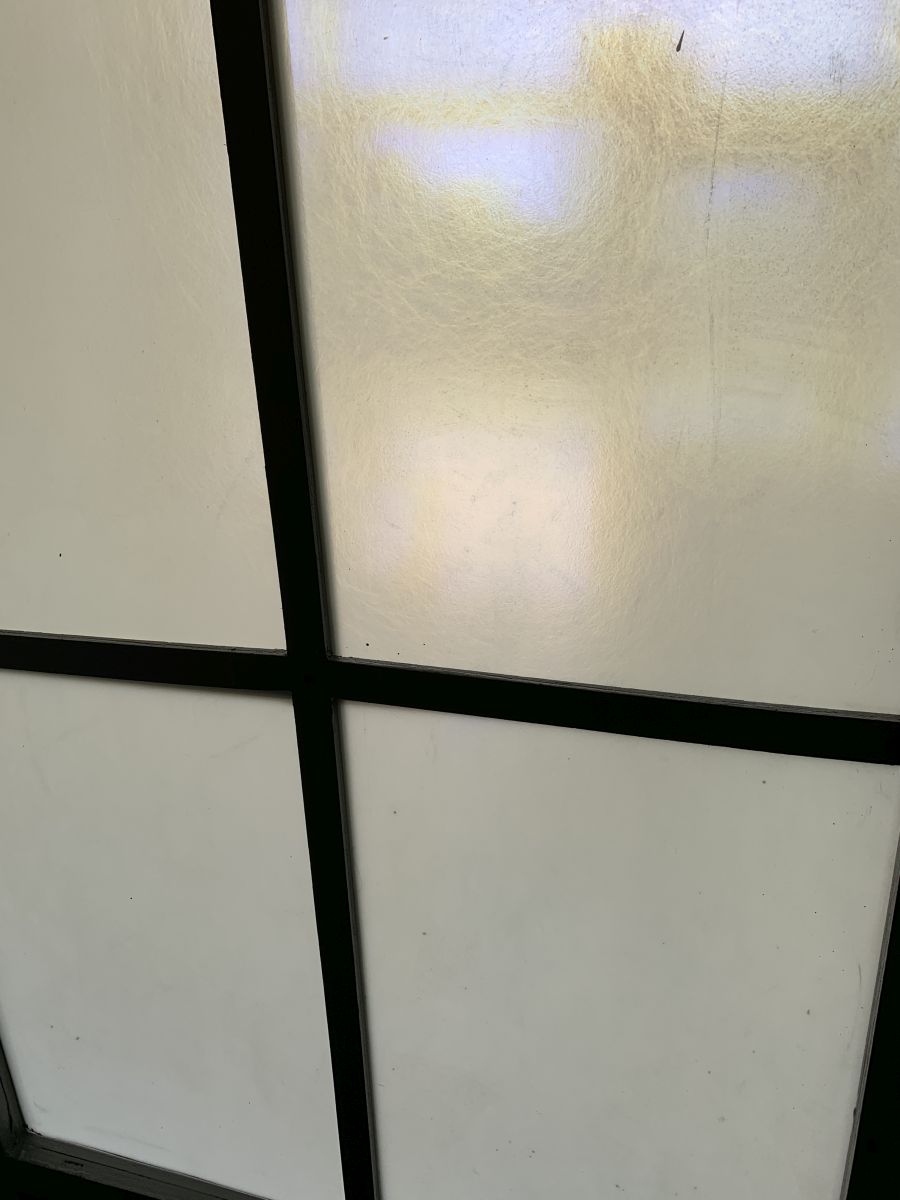 The light is going to shine through these things just … so

Because it’s 4×8-foot sheets, shipping is by freight truck only, which means considerable shipping. $150 for the sheet, $250 to ship it. Since the shipping is fixed cost, at that size, it becomes a matter of “what other stuff might I need?” That would be a good parting word to put on my tombstone, if I were going to have one.

Keeping in line with my strategy of “experiential building” I now have the dimensions of the door-edges: 2.5″. That means the floor rail will be, ummmm, 6″ and I’ll allow a little space between the doors so they don’t hit. I have a 2′ by 8′ sheet of brown poly butcher’s block for the floor rail – I’ll cut two 6″ strips, bevel the edges at 45deg to make them less stubbable, and then cut channels along the top that are 3/4″ x 1/4 deep for the base-pieces to ride in. Then I will cut matching base-pieces that get screwed to the bottom of the doors with stainless screws. The floor rail will get some silicone sealant and pan head tapcon screws to keep it in place. I am flying by following my nose, here, so I worry a bit about the design. It seems to me that having the rail slightly elevated will make it serve as a rain-block to keep moisture out. Using a base-piece on the bottom of the door will keep the foot of the door from sitting in a potential puddle of water, and polypropylene glides nicely on itself.

Once the floor rail is done, I can figure out the header. The header’s going to be interesting – laid up plywood with some kind of divider sandwiched in it (maybe sheet aluminum, maybe ABS plastic) I’m going to need to mount that at the right height, correctly against the upper beam of the opening. There’s a galvanized steel cross-beam that I ought to be able to make brackets on – probably glued-up plywood screwed into the steel, then my door header screwed into the plywood. “To Be Determined.”

In the meanwhile, I have been collecting all the components for the propane system. The way the propane company guy mounted the regulator is really half-assed – a wire-loom clamp screwed into the panel. I want to build a nice mounting-plate for the cutoff valve, pressure regulator, and quick-release connector – all three nicely in a neat row, bolted solidly to the wall.

I am so far behind on this project that it’s not funny. And, it has made me push everything back farther and farther. My “To Do” list is terrifying, still. But, as soon as I have the propane line re-done and can drop a few electric runs, I can light the new shop up and forge again. My need right now is not for more blades, though: I have knife-mounting jobs to do and a lot of blade-polishing and finishing, all blades from last year.