My projects, I realized, define my life and separate me from reality. When I am working on something, I am totally focused and nothing else matters, so all the evil of the world temporarily fades from my mind. Although, that’s not entirely true. When I am thinking about an article, I often read and re-read sources, and I sometimes mutter under my breath as my subconscious formulates my viewpoint. I am careful not to have one of my creative avenues bleed over into the other and destroy it – imagine if I started trying to make art that represented how I feel about the Palestine situation; it would not be pretty. I want to make elegant-ish cooking knives, not killing tools.

So, instead of working on the doors (I’ll comment on their status below) I took a down-day on Sunday, stayed home (it was 90 out and I have no AC) and mostly sat in my office under the fan. I’ve been down to my last few drops of laundry soap, so I decided, finally, that it was time to make more.

Making soap is a bit messy because if you’re not careful it’ll boil over and then you have some clean-up to do. A bit of windex and a paper towel cuts it right off, but once the soap is fully cured, it’s cleanup in water.

It’s really easy to make; I’d like to encourage any of you who have been considering it to just give it a shot! There’s not much that can go wrong – you just measure stuff into the pot and heat it up, stirring regularly. I set an alarm for every 10 minutes and play Fallout.

Liquid soap is (duh!) all about managing the water-level in the mix. That’s not a big deal, you just need to be careful not to dry it out and burn it, or turn it into a “soap volcano” by making it boil hard. Simmer slowly, stir often, and if you add more water, make sure it’s hot water so you don’t get soap volcano. (Adding cold water to boiling soap makes it foam like crazy; I don’t get that at all, I’d expect the opposite reaction but that’s not what you get)

After you cook it down into a ropy gelatinous mess, then you rehydrate it with a bunch of near-boiling water. Then, you stir the ropy gel into the water until it melts – a couple hours off and on – and bottle it off. That’s it! Can you stir with a spoon? You can make soap.

That’s it. I let it cool in the pot for a couple hours (do not put boiling water in polypropylene jars, they will melt) then pour it off. If I am concerned about the little “head” of foam I use a gravy separator to clear a bottle, but generally I don’t care. Since I use less than a tablespoon per load of laundry, that’s a pretty long-term supply. I also put scent in some and use it as shampoo, from a big dispenser in my shower. 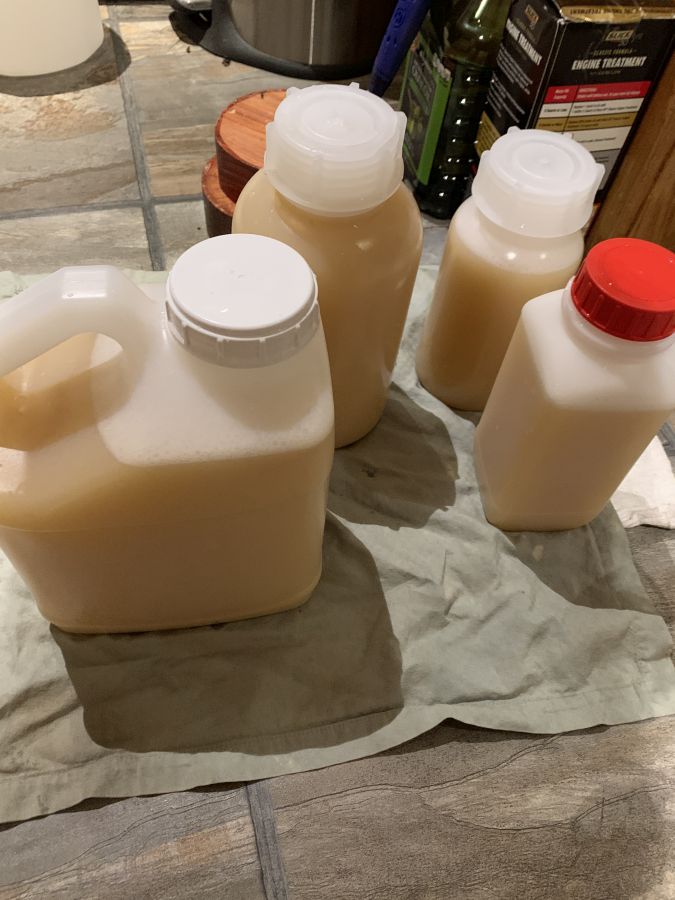 Now, on to the status of other projects. I have the forge body on my shop bench and have been cutting pieces off an L-bar. The plan is to weld pieces of the L-bar all over the inside of the body, so there’s something for the cement liner to lock onto. That’s all ongoing. It’s very relaxing to hear the bandsaw chewing away in the other room while I paint.

The painting is going … apace, and that pace is slow. I’ve got a routine down, which means I’ll be done and I can forget the whole thing fairly soon. So far each door has 2 coats of paint and I still have 3/4 of a gal of paint left. My plan is to just use it up. I’d love to stop but it’d be stupid to just let the stuff go to waste. Once I have the paint done, I think the rest will go fairly fast.

Meanwhile, I have been stubbing together the propane feed controls (cutoff valve and pressure regulator on the wall) and forge controls (PIC, K-type thermocouple, and slow-open propane valve). I think I will do all that when I have the jacket cast completely on the inside of the forge body. I’ve been thinking what kind of form I need to build and I’m not happy with the options that have been leaping to my mind.

It’s driving me nuts how slowly I work on things, lately. I am blaming the clot-busters. I swear I do feel lazy and a bit woozy all the time, but maybe it’s just an excuse.

The Leg: Scampering, Not Quite » « I Don’t Think John Oliver is “Funny.”