This is an experimental commissioned piece. I’m happy with how it came out, but I have to admit it’s a bit unconventional.

Apparently it’s been doing well in operational testing, so that’s a relief. The specification I was given was that it be large and heavy-ish but with a large handle to counter-balance. And something to do with motorcycles would be a plus.

So, I made a batch of canister damascus of 1095 powder and motorcycle chain. Because of the alloys in the motorcycle chain, it came out ludicrously tough – when it came down to polishing it, I found that I could leave it sitting on a sanding belt and it’d get shiny and warm but basically no metal would remove. When you’re trying to make big flats like this, that’s a problem since it just takes forever. I think I spent two full days just polishing it. Then, once it looked like a mirror, I parkerized it. 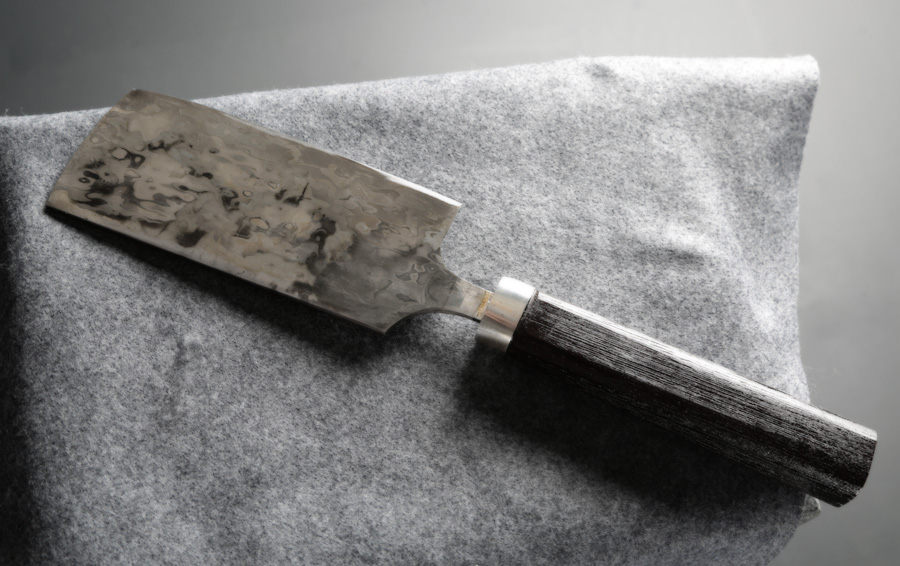 The handle is an African hardwood called “Wenge” that is lovely and hard and has a complex grain. To bring the grain out, I brushed the wood with a wire brush. The silver wrap ferrule is just a piece of silver I wrapped and brazed then epoxied in place. It’s a really solid set up.

Cleavers like this need to be very thin, which is nice because it means you get it about where you want it and then keep polishing it thinner and thinner and there’s really no such thing as “too thin.”

Notes on commercial photography: this was hard, because it’s got an extreme range of brightness. If you look a the butt of the handle, there’s a small hot spot, and a matching hot spot on the ferrule. The main light is a big soft box to camera forward-right, and there’s a small strip-light to camera rear-left to make the handle not just look like a mass of black anonymity.

I’m probably going to shift my cleaver-making style back toward more traditional, with the tang at the top of the blade so there’s a great big side to use for ${whatever}. You don’t really need all that much blade real estate but if you’re slaughtering some cabbages, I guess it’s good to have something divisive.

Notes About Herd Immunity » « Are You Flippin’ My Pancakes?