It appears that an ancient smith in Persia was making steel that was close, in today’s terms, to what we’d call “stainless steel.” The question is whether that was lucky, or intentional, or both.

Chromium steel, commonly referred to as stainless steel, is thought to be a recent manufacturing innovation, but new evidence suggests ancient Persians stumbled upon an early version of this alloy some 1,000 years ago, in what is a surprise to archaeologists.

Ancient Persians were forging alloys made from chromium steel as early as the 11th century CE, according to new research published today in the Journal of Archaeological Science. This steel was likely used to produce swords, daggers, armor, and other items, but these metals also contained phosphorus, which made them fragile.

“This particular crucible steel made in Chahak contains around 1% to 2% chromium and 2% phosphorus,” Rahil Alipour, the lead author of the new study and an archaeologist at University College London, said in an email.

Back in the “good old days” smiths engaged in back-breaking labor to experientially figure out the properties of various metals. It’s not like nowadays, when you can go to New Jersey Steel Baron and order up a stack of 1095 high carbon steel 1/4″ x 2″ x 48″ and it arrives in a FEDEX truck a couple days later. Ancient smiths were melting down material they collected in various places, adding their own mix of special ingredients, and seeing how it performed. I was interested to see that the Persian steel had a lot of phosphorus in it, too – they got the chromium right but should have replaced the phosphorus with vanadium. But, at that time, there was no “vanadium” that anyone knew about. For sure, if an ancient smith had started making chrome/vanadium steel, their work would have been considered magical – except it wouldn’t forge-weld properly to anything.

Nowadays, smiths like myself refuse to work on “mystery metal” because you can spend hours producing something that looks great but snaps in half, or doesn’t hold an edge – and you have no idea why. I’ve talked to smiths who make knives out of old saw blades but even that is a crap-shoot; some saw blades are 15N20, others 1095, and more are “whatever went in the crucible that day” but they work as saw blades because they have plasma-deposited carbide on the teeth which means that the rest of the blade doesn’t have to do anything beyond “hold the whole thing together.” That, in a nutshell, is what pattern-welded blades, like I make, do: I can make a blade with welded cable on the faces, surrounding a chunk of 1095, and my whole problem boils down to making sure the 1095 ends up where the edge is going to be. My suminigashi brew is a bunch of stuff that no smith in their right mind would use for a blade, but it’s great for the facings of a blade because it’s tough stuff and can help hold the blade together.

By the way, I was talking with another smith about how hard it is to drill a hole through my suminigashi and he pointed out that what’s probably going on is that the transitions between the carbon and mild steels are forming carbide crystals in there. And, as he pointed out, “drilling carbide with a carbide drill means you use a lot of drills.” This is stuff that, today, we sort of kinda mostly understand, but a smith in ancient Persia would have just noticed that this particular batch of steel was particularly shiny and resisted rust well, so he tried to make more of it. 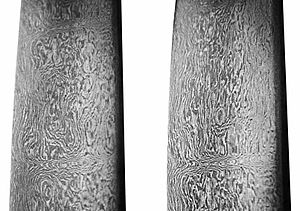 Then, as a thread through the entire story of Persian steels, is wootz steel. Modern smiths get into fist-fights about wootz. See, wootz is the original “damascus steel” (Damascus being a city in Persia, right?) and there are wootz blades of Persian origin going back to around 800AD when Persian smiths started getting their hands on steel from Northern India. It appears that they probably threw it in a crucible together with other stuff and, when they broke the crucible open and started refining the metal into a bar, they noticed a weird “watering” pattern. Basically, what was happening is that the different impurities in the steel (vanadium and manganese, mostly) made it separate slightly as it cooled; you got these treelike shapes (also referred to as “dendritic steel”) in the steel which were different ductility and hardness from the rest. Today, we get a similar effect by layering different kinds of steel together, and quenching them differentially, but the original wootz had its watery grain just by the accident of how it was made. I imagine that the smiths who first saw that were very excited, and spent the rest of their careers trying to refine and reproduce that kind of mix. Today, there is a small hard corps of smiths who spend their weekends dancing and drinking around propane/oxygen fueled vertical smelters full of a bit of this and a bit of that; i.e.: Joe’s secret wootz mixture of 3 parts disc brake, 1 part 1095, 1 part semitrailer axle, and some powdered vanadium thrown in. To me, it has the feel of a holy ritual that calls out across the years and miles.

Making steel was a critical military technology until the gunpowder age (and, even then…) and it’s fascinating that, as a great military technology, various pieces of steel found their way all over the place. There are 13th century viking swords, unquestionably forged by vikings, but the metal appears to be of Chinese or Persian composition. Scientists can track this stuff. It’s so damn cool.

By the way, pre-1940s steel is valuable in its own right. Sunken WWII battleships are valuable (I’d love a chunk of the Tirpitz, seriously) in their own right. Hmmm… Let’s do it as a quiz. Make your guess as to why, and the answer is ROT-13 below: