Imagine being told “there are some ballistic missiles coming your way in 5hr, but for political reasons we need you to hunker down in a hole and grip your ankles and hope that they hit where they are supposed to. OK?”

I think I’d be complaining, as enlisted ranks do. When I was Private First Class Ranum back in 1983, I believe I made significant contributions (unpublished, unfortunately) to the Science of Complaint. It’s what soldiers do.

Now, we know that the US Government knew 5 hours ahead of the Iranian ballistic missile strike: Where the strike was going, and the missiles that were being used. Troops at the targeted airbases were told to “shelter in place” which I would interpret as “commandeer a backhoe and make a really deep slit trench, set up my GoPro cameras on the arm, climb into the trench with some cushions, and earmuffs and eye protection, then record an inbound ballistic missile strike for my youtube channel.” As Trevor Noah pointed out, you could finish watching The Irishman and have some time left over, with advance warning like that. You could also be nearly 200 miles away, even driving at a reasonable speed. [db]

“We knew, and the Iraqis told us, that this was coming many hours in advance,” a senior administration official said, adding, “We had intelligence reports several hours in advance that the Iranians were seeking to strike the bases.” Troops stationed at bases in Iraq remained in protected positions for hours – they were ordered into bunkers, clad in protective gear, and told to “shelter in place,” according to military officials.

It appears, further, that the Iranians wanted to demonstrate the accuracy of their missiles. So, they targeted stuff on the air bases that they knew didn’t matter. 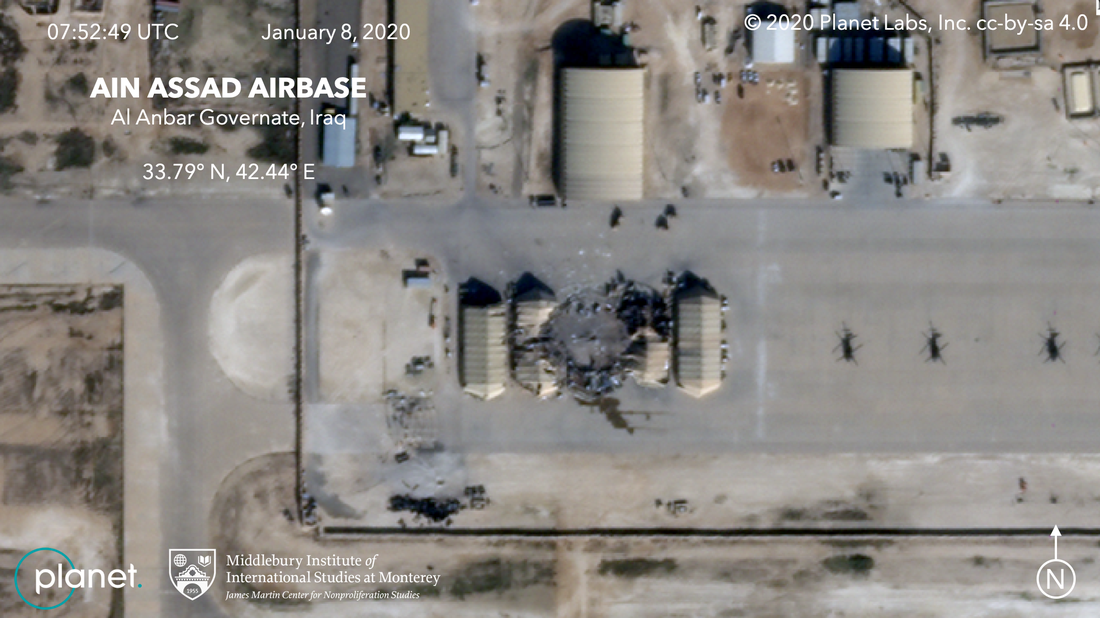 Air bases are pretty big. Somewhere in all that, were a few Americans, complaining bitterly.

Based on US military experience in Afghanistan, there’s a good chance that the US part of the base is isolated from the Iraqi part, in order to prevent “blue on blue killings” where an “allied” soldier decides to throw a grenade at their US counterpart or commander. US fort-building nowadays is concentric forts. Let’s have a look on Google maps. 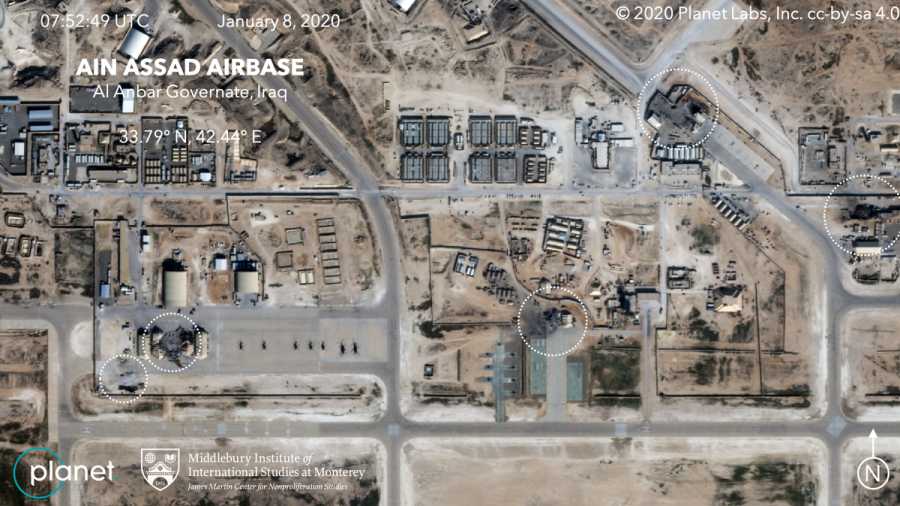 You can locate the damage south of the revetment hangars, which means the Iranians were aiming about 1,500ft from the American part of the base: 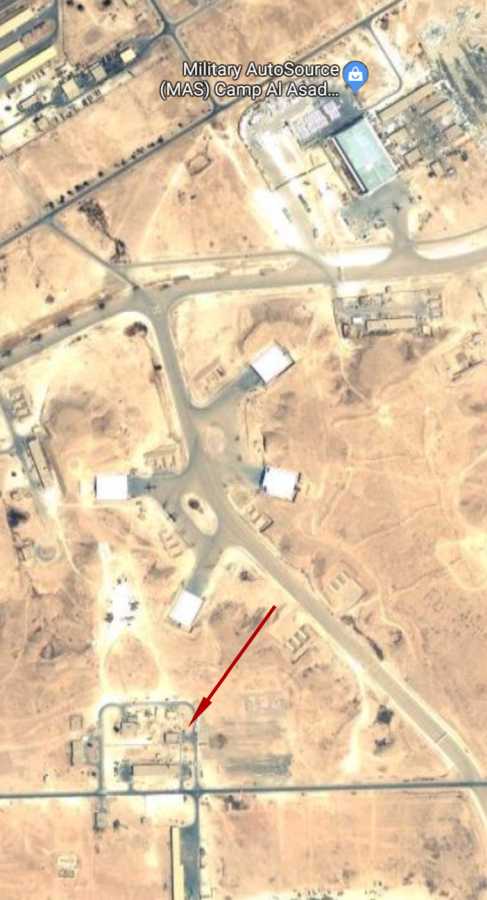 red arrow is where the missiles hit. US base is marked with google map pin

PS: Wow is that google map out of date!

By the way, I don’t know if you know this but GPS coordinates returned by google maps or civilian GPS devices are all deliberately skewed, slightly. One of the things the Iranians probably captured when they captured that CIA drone a couple years ago, would have been a US military GPS unit, including encryption keys, which would be worth quite a lot to anyone who needed precision navigation for military purposes.

Anyway, the missiles would have impacted about 1/2 mile from any Americans so there probably was a light-show and a lot of noise and excitement but no danger except to people’s ears.

It’s amazing that so many in the military revere Trump. This is the guy who has been jackassing US strategy and who finally had them take a show-drubbing in order to satisfy Iranian honor for something he did. Iran, apparently, has better control of its news media than the US, and announced (for internal consumption) that 80 Americans were killed.

Mike Pence is also getting some lies told, because he’s a good christian who follows those 10 commandments, especially #9: [cnn]

“The ballistic missiles fired at American bases…we believe were intended to kill Americans. We have intelligence to support that was the intention of the Iranians,” Pence said during an interview with NBC’s Savannah Guthrie.

Pressed by Guthrie, the vice president said it was “not at all” risky to let Iran take the shot. He said the US response at the bases was not “simply hunkering down,” noting that the US military repositioned personnel and assets, ultimately avoiding any casualties.

Uh, Mike, how did the US know where to reposition the personnel to?

The US embassy in Baghdad is … interesting. Nothing screams self-confidence like spaced armor and (I assume) mortar and missile catchers on the roof. And notice there’s nothing near it – noplace for snipers to hide, etc.  There is a significant wall around the entire compound, with crenellations just like those on Fort Zinderneuf. 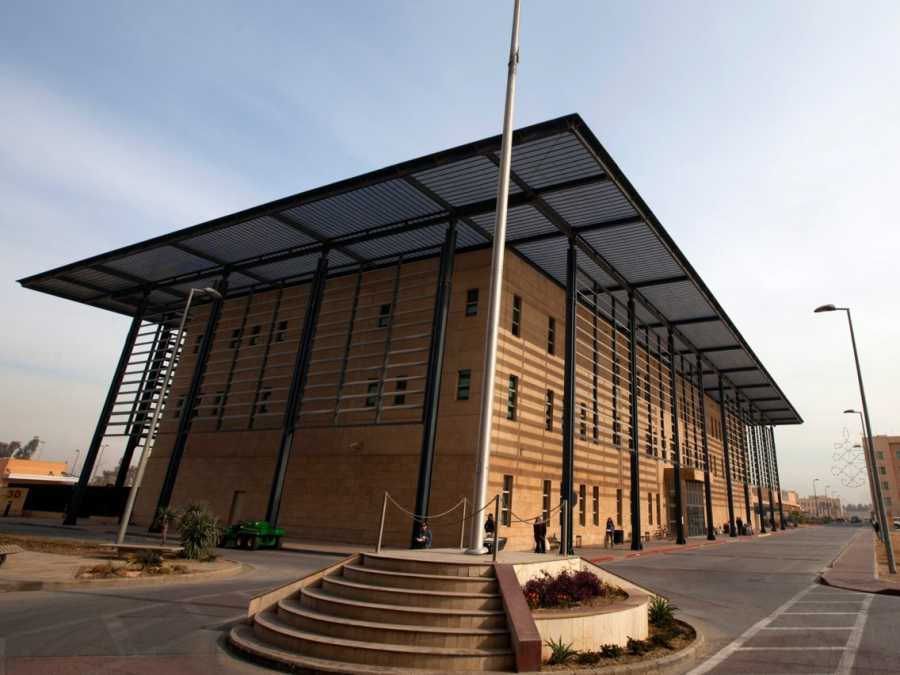 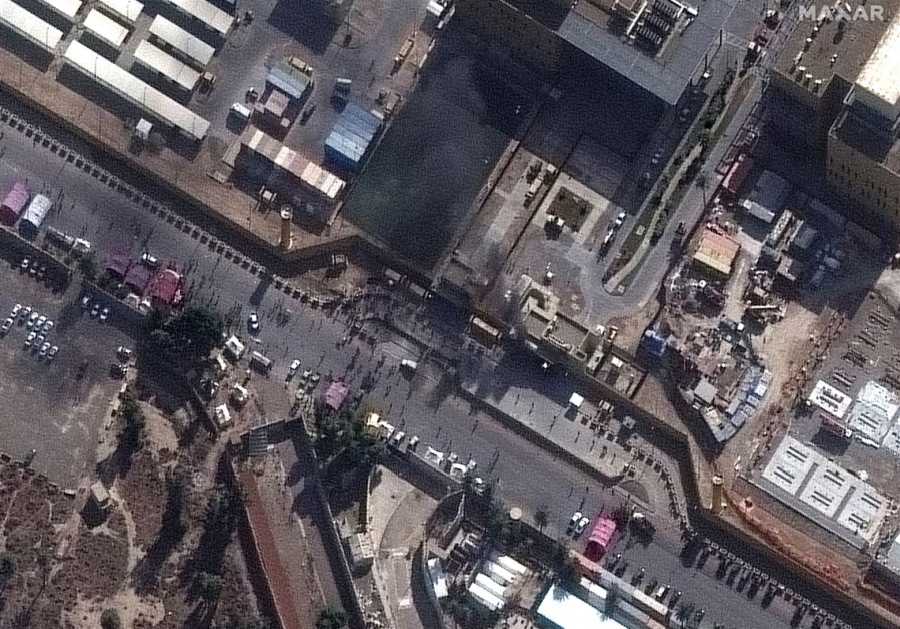 It looks like the buildings that the rioters burned were the reception center. Look at the gun towers on either side of the main gate, and all the crash barriers! 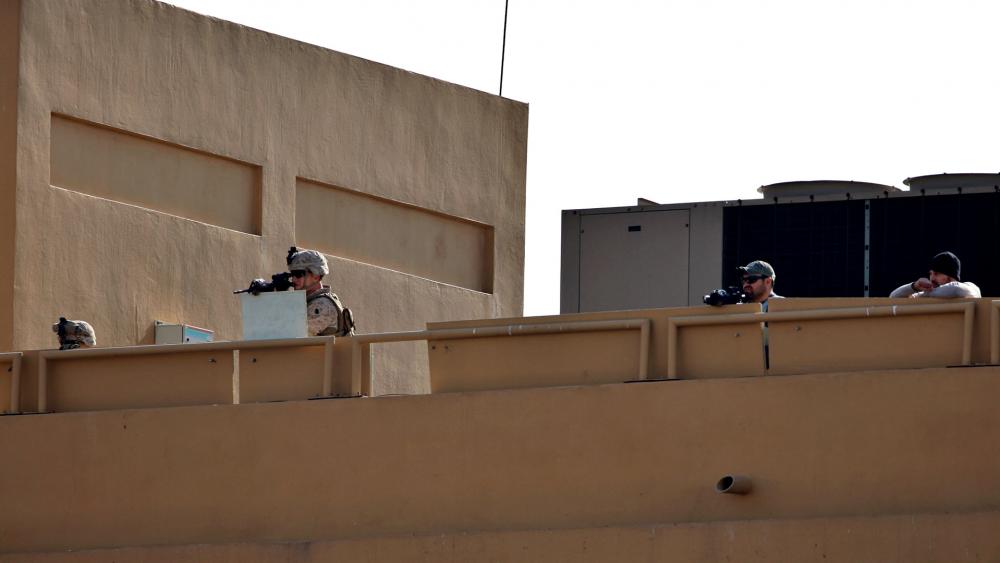 The Iranians were obviously just sending a message and not trying to hurt any Americans, or that’s where the missiles would have landed.

I’m fascinated by how round the blast-zone from the missile is. I’m assuming that’s the demarcation of where the shockwave was supersonic and then subsonic – it looks to be about 100′ across. I suppose we could guesstimate the payload from that, but it’s easier to guesstimate the payload of ballistic missiles as: 500lb – 1000lb, because that’s what a nuke weighs and there really is very little other purpose for building ballistic missiles. The Iranians were signalling that, when they get a nuke (not “if”) they will be able to deliver it accurately.

When you’re actually trying to kill someone, you’ve got a spotter on the ground a mile away with good optics. “OH, hey, US convoy leaving the base out the south gate!” That’s how the US does it; it’s what the expensive drones are for. The Iranians also have drones.

I wonder how long it’ll be before some of those GoPro “look at us getting missiled!” show up on youtube.