Mike P and I [reddrag] often share our successes, and warn each other of our failures. Somehow we got on the subject of using nickel sheet in damascus in place of high nickel steel.

I did some experimenting early on and determined that nickel looks snazzy and welds well to steel, using nickel sheet on some crazy transition-lines for high contrast blades. Then, I had what I can best describe as a brain-fart: I literally have no idea what I was thinking when I did this.

“If I had thin layers of nickel welded into a stack of 1095 it would make fine bright lines that would look pretty dramatic!” 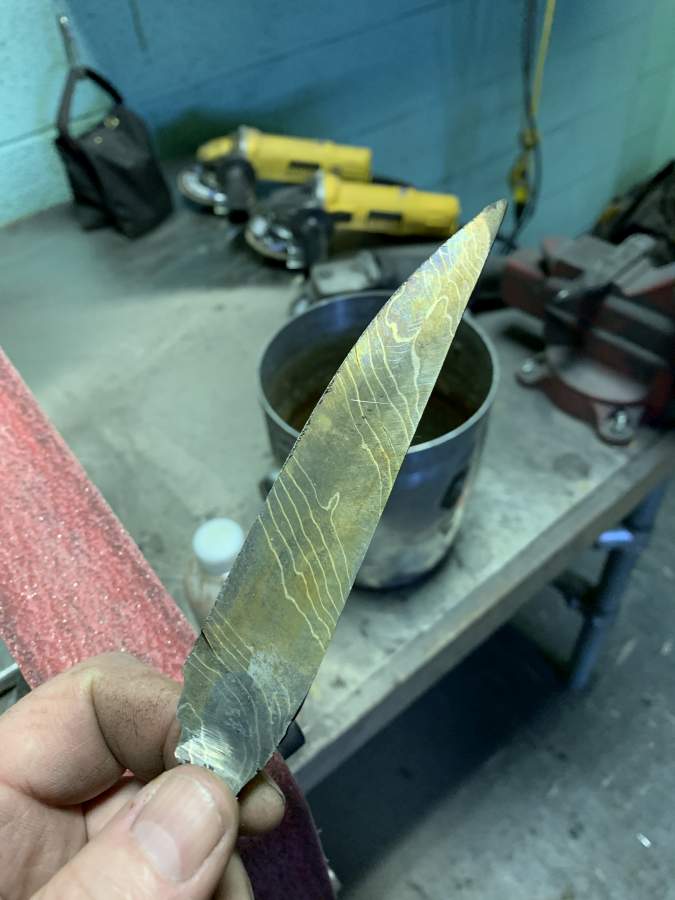 But I forgot that it would also mean that the nickel weld-line would transition across the edge; nickel doesn’t sharpen well.

Then Mike and I had the text-message conversation:
Marcus: “put it in the fucked box, or try to grind it out?”
Mike: “grind it thinner.”
[time passes]
Marcus: “OK, it’s thinner but this is a radial blown weld.”
Mike: “grind it really thin.” [Mike is suggesting that somewhere in there is a region where it twisted instead of splitting; I just have to find that before it becomes a knitting needle]
Marcus: “I’m going to hit it with the mig.” 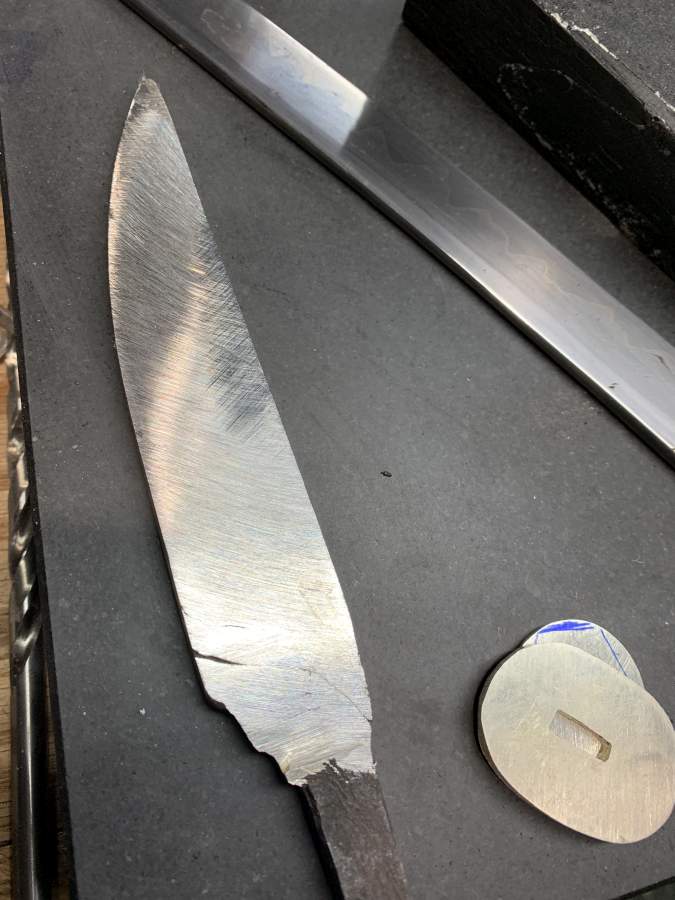 That’s not actually as crazy as it sounds; my mig welder is currently loaded with flux core steel wire, which is also 1095 steel! Besides, there’s really no point in doing anything else with this piece, unless it’s to cut the whole blade shorter by carving out the zone with the bad weld. Actually, hmmm, I may do that.

Mostly I wanted to illustrate some of the visuals you may be dealing with when you’re looking at a knife blade that hasn’t fully revealed itself, yet. I’ve probably got 4 or 5 hours of work in that piece, if you count prepping the steel, laying up the billet and welding it, cutting it and hammering it into rough shape, then refining it with a grinder. This piece is also an experiment because I flattened the side using my 12″ disc sander – a terrifying monster – which gives a close to perfect flat surface.

Where I really started to smack myself for being stupid was when I realized that the twisted nickel goes across the cutting edge and – even if it’s a good weld – it’s not a cutting surface. It’d make a nice belt buckle, or a gooby, or a bottle opener, but a blade is out of the question. Don’t make these sorts of decisions when you’re tired. If I had used 15N20 I’d have a pretty nice piece of steel to work with. If I had gone horizontal and done a couple of cut/fold/layers it’d look great as long as I welded a thin piece of something down the center to form the edge. With this piece, I could have gotten away with grinding the dead spot (or mig welding it) out, then flattening the sides and welding something like a chunk of 1095 between them. 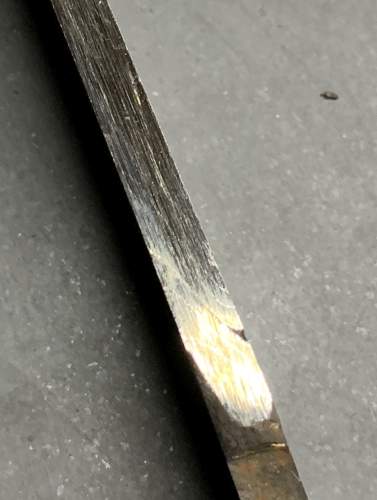 It just looks like a chip, but actually it’s a deep rift going into the heart of the steel.

The “Green New Deal” is Soooooooo Expensive » « Tuck, My Fruck is Stuck