You can’t own all the problems; sometimes the best you can do is give a small nudge and let nature take its course.

Lately, however, “let nature take its course” has a cruel and dishonest ring to it. I can hear it in the nasal tones of Jordan Peterson or the mellifluous self-deception of Lou Dobbs. It’s a reminder that the world is unfair and nasty; that that is why we should not simply throw up our hands and let the rich and powerful do what they will, why we suffer what we must. Here’s one good reason, off of the top of my head: if we let the rich and powerful do that they will, they’ll usually end up attacking and obliterating someone helpless. After all, if they wanted a fair fight they wouldn’t be trying to get increasingly powerful, they’d compete fairly. What a silly idea – fair competition is for losers.

I went to haul a trunk-load of stuff from the shop (welder, mask, gloves, steel stock, rebar, chopsaw, etc) in the back of the Tahoe and, as I was passing by the puddle in the woods, I slowed down, thinking “I wonder if there is any more ill-advised frogspawn?” 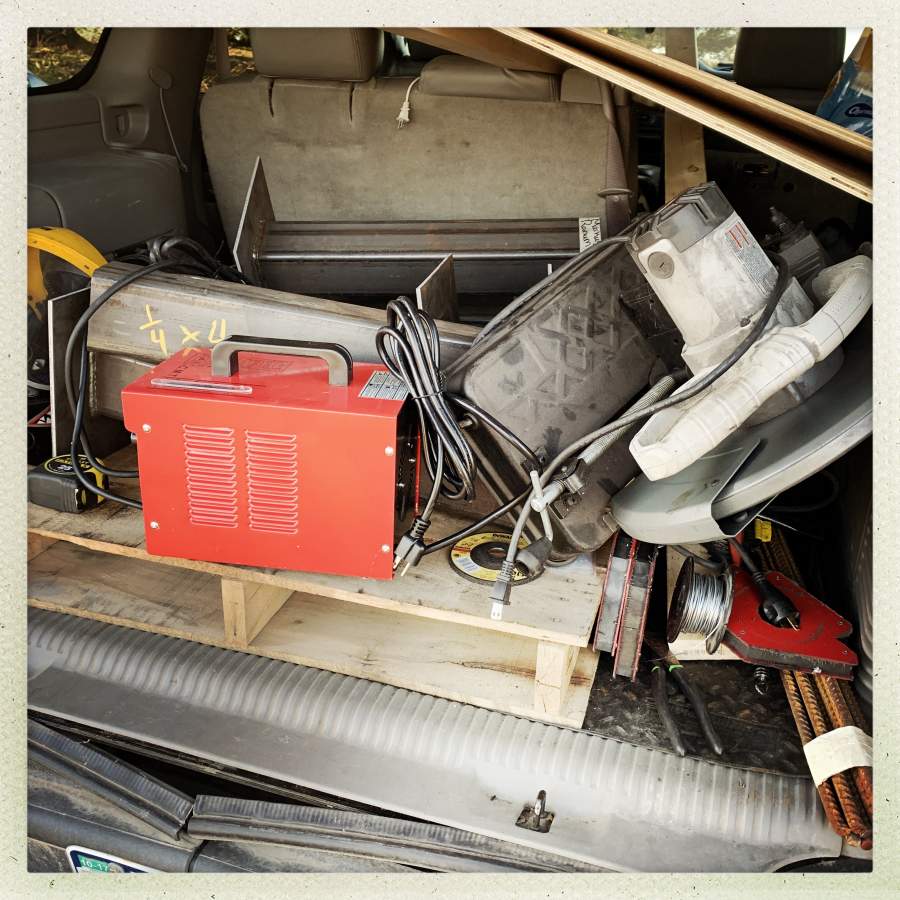 tailgating: it’s how I roll

There was so much that I had to bring a 5-gal bucket with a lid, and more or less drained the puddle, which had receded considerably and consisted mostly of frog eggs. The hero of the story had arrived just in the nick of something. I’m a bit unsteady on my feet right now because my left big toe is having a gout attack, and it’s throwing my balance off and causing serious pain. Naturally, I shambled and stumbled and wound up standing in the middle of the puddle, from whence I was perfectly positioned to collect all the spawn.

Something had been nagging my subconscious about the last round of frog spawn: I had made no attempt at all to see how it was doing.

Normally, I would not mention a little detail like the gouty toe; I wouldn’t want to be a complainer. I know people who constantly suffer much worse pain and refuse to let it slow them down. On the other hand, my pond back there is rough terrain and walking was painful; I was sitting in a great big V-8 powered American 4×4 and, instead of walking, I could just hit the “4W HI” button and drive down there, dump the spawn, and head back. Normally, I’d feel lame driving the 200 yards from my house but on the day I was actually lame. By resisting my natural stubbornness, I was striking a blow against toxic masculinity, or something.

I parked and scrambled, teetered and tottered and made my way to the lip of the pond then peered down into the water looking for the first spawn mass. And, there it was – about 90% consumed by salamanders; a small army of salamanders was crawling all over the remains.

“Out of the frying pan, into the fire” is the old expression – except that in this case those tadpoles had no agency at all, they were just along for the ride. But what could I do? The salamanders were there, first. One could get all heavy and metaphorical, and I did. I sat there for a bit thinking about America’s non-crisis of migrants – people who are so unhappy with their current situation that they’re willing to undertake a dangerous trek up to the North, to a land where the anarcho-capitalists have already created a berth for them as part of the permanent underclass. After years of backbreaking labor milking soy beans for the Whole Foods customers, your kids may someday grow up to pack boxes at an Amazon.com warehouse. I had forgotten that my little pond is Hobbes’ playground, a battle of all against all where superior force wins. Wishing for the heron (who sometimes shows up to eat “my” frogs) to come take the salamanders down a peg simply would not be fair either.

Naturally, it makes no sense at all to judge a bunch of salamanders by my standards – they’re not Spartans, Nazis, or Israelis, they’re just salamanders and some idiot had dropped a load of yummy eggs right in their laps. The gods have taken sides and this week it’s the salamanders’ week. As Abbe Meslier wrote [stderr]

Through an effect of Thy Providence which watches over Thy creatures, these, our destroyers, murder each other, and thus furnish us with sumptuous repasts. O Allah! HOW GREAT IS THY GOODNESS TO THE CHILDREN OF WOLVES!” 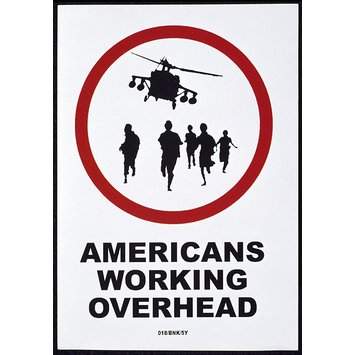 At some point, I must have gone through realizations similar to Meslier’s, rejecting morality as saying little more than describing our starting-perspective. The salamanders are not going to establish a United Nations of Marcus’ Pond safety zone for the tadpoles; they are not equipped to read Sam Harris’ The Moral Landscape and, uhm, discard it as a bunch of retreaded virtue ethics and circular argument. Since nature did not equip them thus, they are beyond such reproach. But, careful, that same argument exonerates republican lawmakers just a well – it goes like this: having been raised in an environment of religious and political propaganda designed to stunt their growth as moral beings, we cannot expect them to display a fully-matured moral sense. Therefore we cannot blame them any more than we can blame the salamanders that eat the next generation of their competitors. I can’t make a good moral argument for any of this stuff; I no longer try. All I can say is that I tried to save some frogs. It made me wonder if someone should be warning the migrants, “beware, you are heading into Hobbes’ playground, where man exploits man” and naturally, they’d drop the punchline of the old joke, “back where we came from it was the other way around.” America ought to come with a warning label. It’s a country where the most vicious and corrupt rise to the top and they won’t hesitate to have their private security gun you down if you ask for a seat at the table.

“Out of the frying pan, into the fire” – it’s easy to forget that, for the saying to make sense, you first must recognize that you’re in the frying pan.

I feel like I ought to be able to sort out how I feel about the frog eggs, but I can’t. I guess “let nature take its course” is where I’m coming down, but didn’t Benjamin Netanyahu just say more or less the same thing about the west bank? Poor Nietzsche tried to sort these things out as his brain was collapsing all around him, and he was a better thinker than I’ll ever be. It’s something I will never figure out; I may not even figure it out enough to have an opinion about it. 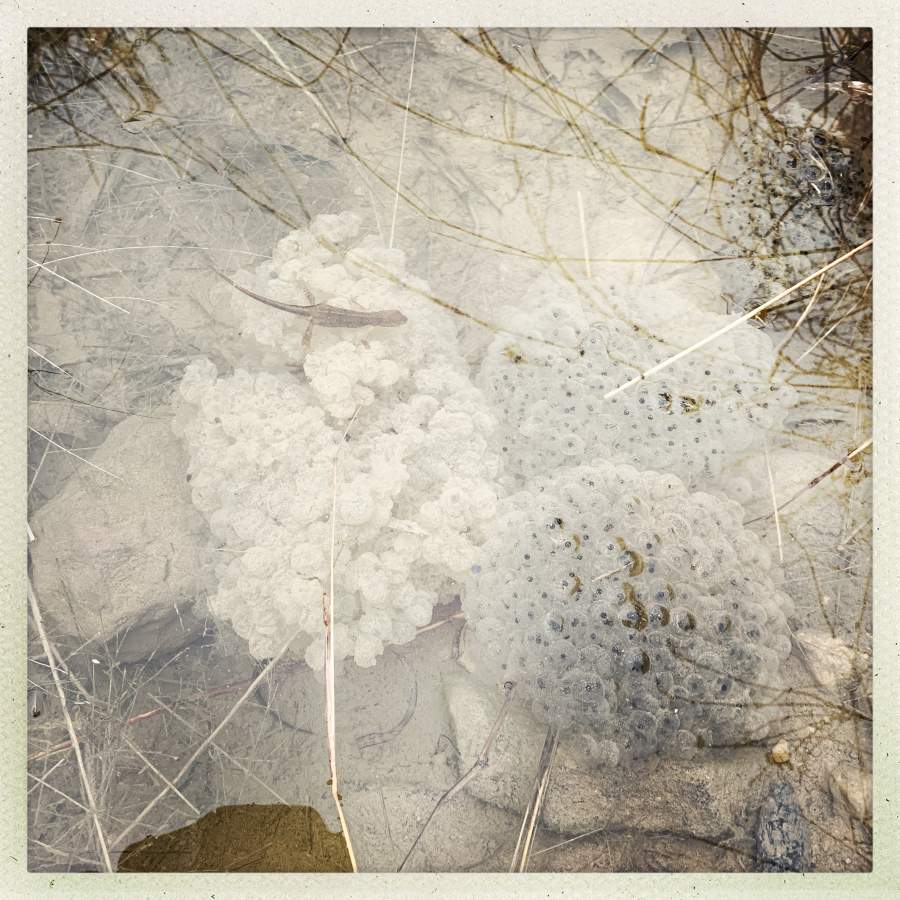 We cannot judge them by our morals, because we have none

Because of the water-flow in the pond, the new egg clusters fetched right up next to the old one (pictured above, with salamander eating the lone remaining few tadpoles in the eggs). The gods are cruel. Oh, wait, that’s me.

With a feeling of less certainty I returned to the car. My foot hurt and it was getting late and I still had a lot of welding to do. But that was not going to happen, either: I had forgotten I put more road-worthy tires on the Tahoe and it’s no longer carrying great big cleated mud-stompers. While I was standing around judging the morals of salamanders, my truck had found a nice soft resting-place and snuggled right in. Monday, I will have to go ask my neighbor to pull it out with his tractor. 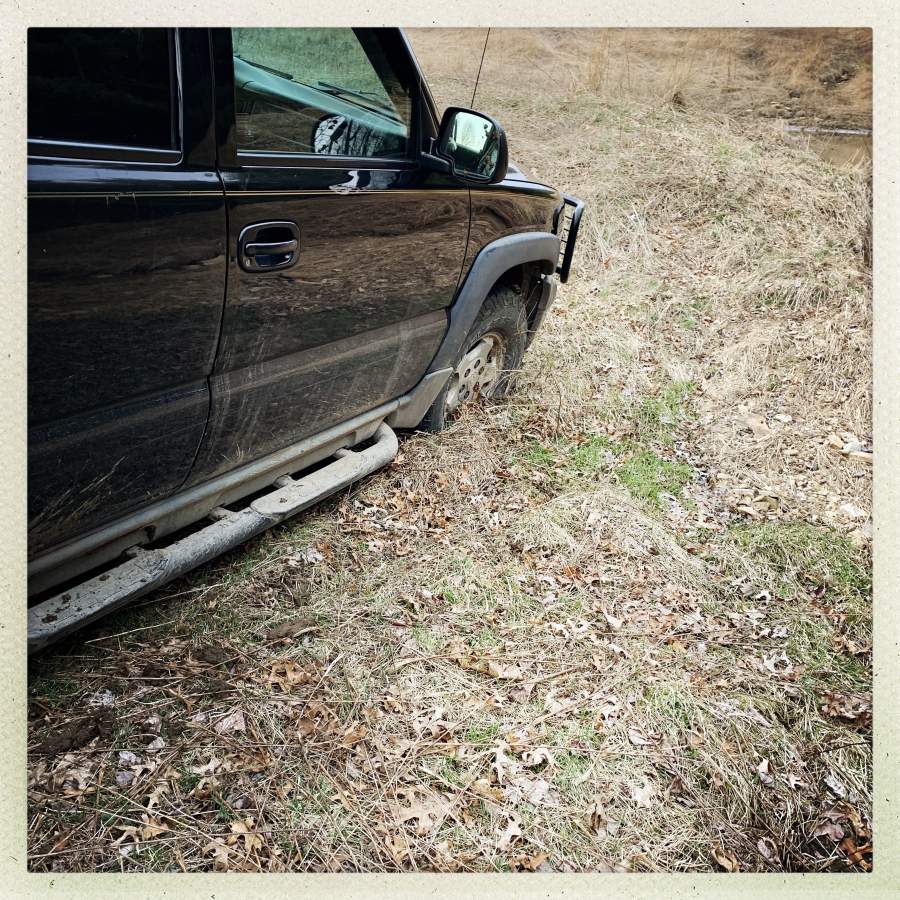 And that got my mind whirling again. What would it be like to have to worry that my neighbor would call ICE instead? Some of my neighbors probably don’t like that I’m an atheist. If it were Hobbes’ playground up here, what could I expect if I asked a neighbor for help? The veneer of civilization is not thin, it’s nonexistent.

Reverence For The Law » « Randomness