“You know,” said he, “my brethren, my disinterestedness; I do not sacrifice my belief to any vile interest. If I embraced a profession so directly opposed to my sentiments, it was not through cupidity. I obeyed my parents. I would have preferred to enlighten you sooner if I could have done it safely. You are witnesses to what I assert. I have not disgraced my ministry by exacting the requitals, which are a part of it.

“I call heaven to witness that I also thoroughly despised those who laughed at the simplicity of the blind people, those who furnished piously considerable sums of money to buy prayers. How horrible this monopoly! I do not blame the disdain which those who grow rich by your sweat and your pains, show for their mysteries and their superstitions; but I detest their insatiable cupidity and the signal pleasure such fellows take in railing at the ignorance of those whom they carefully keep in this state of blindness. Let them content themselves with laughing at their own ease, but at least let them not multiply their errors by abusing the blind piety of those who, by their simplicity, procured them such an easy life. You render unto me, my brethren, the justice that is due me. The sympathy which I manifested for your troubles saves me from the least suspicion. How often have I performed gratuitously the functions of my ministry. How often also has my heart been grieved at not being able to assist you as often and as abundantly as I could have wished! Have I not always proved to you that I took more pleasure in giving than in receiving? I carefully avoided exhorting you to bigotry, and I spoke to you as rarely as possible of our unfortunate dogmas. It was necessary that I should acquit myself as a priest of my ministry, but how often have I not suffered within myself when I was forced to preach to you those pious lies which I despised in my heart. What a disdain I had for my ministry, and particularly for that superstitious Mass, and those ridiculous administrations of sacraments, especially if I was compelled to perform them with the solemnity which awakened all your piety and all your good faith. What remorse I had for exciting your credulity! A thousand times upon the point of bursting forth publicly, I was going to open your eyes, but a fear superior to my strength restrained me and forced me to silence until my death.”

The abbot Meslier had written two letters to the curates of his neighborhood to inform them of his Testament; he told them that he had consigned to the chancery of St. Minnehould a copy of his manuscript in 366 leaves in octavo; but he feared it would be suppressed, according to the bad custom established to prevent the poor from being instructed and knowing the truth.

Earlier, I commented about how miserable Meslier must have been – now you can read his own words.

Regarding his accusation that “my parents made me do it”: Meslier is probably referring to the ancien regime practice of disposing of sons. The first son, being the heir, was kept close to the family and raised to take over the family business. The second son, the spare heir, would go into the military, and the third into the clergy. Also, being in the clergy was not a “calling” as it is in protestant America – roles in the church were for sale and were part of a great family’s investment and growth plans. For example, you have Armand DuPlessis (known as “Richelieu”) who was raised to be a soldier, went to military school to pursue the profession of arms, but, when his family was granted a bishopric as a “thank you” from king Henry III, the family tapped young Armand for the job (and pocketed the substantial revenues that came with the post!) – he was a fascinating historical character, the warrior-cardinal. 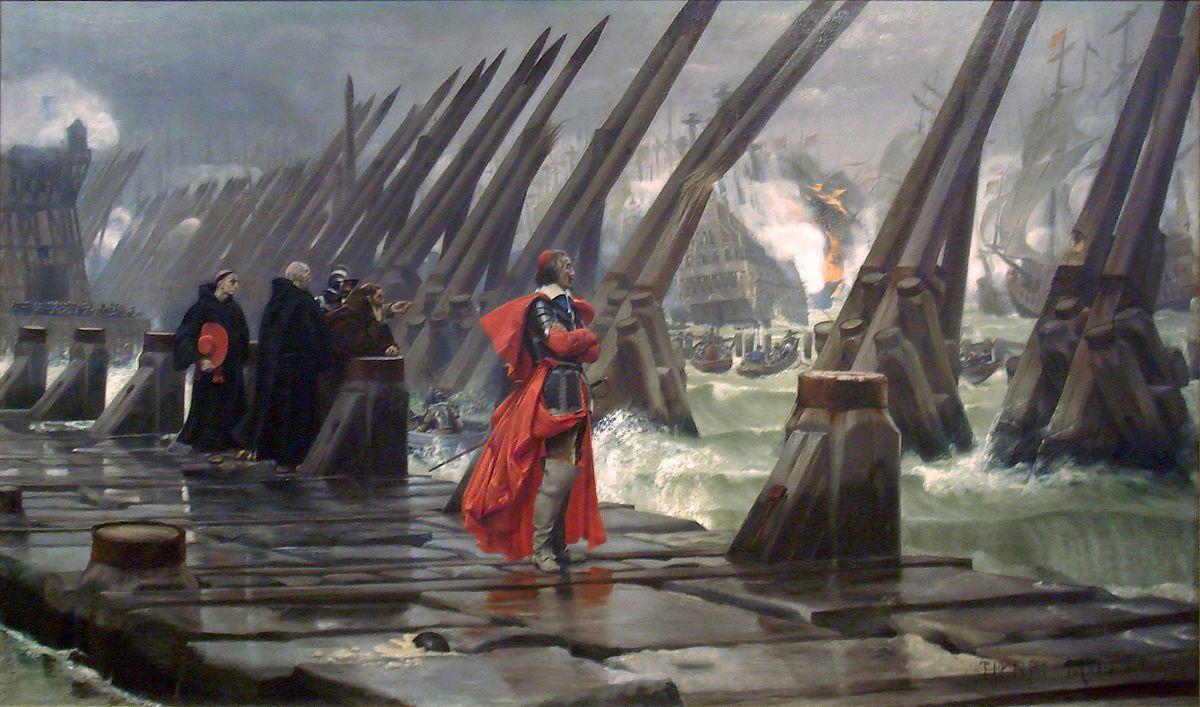 When I was a kid, I loved the painting above (for its colors, composition, complexity!) when I saw it at the Musee Des Invalides where it has hung my entire life. He really did dress like that, too: he went out in his cardinal’s robes with armor over them, quite the target.