A: The instinct that gives us a sense of justice. 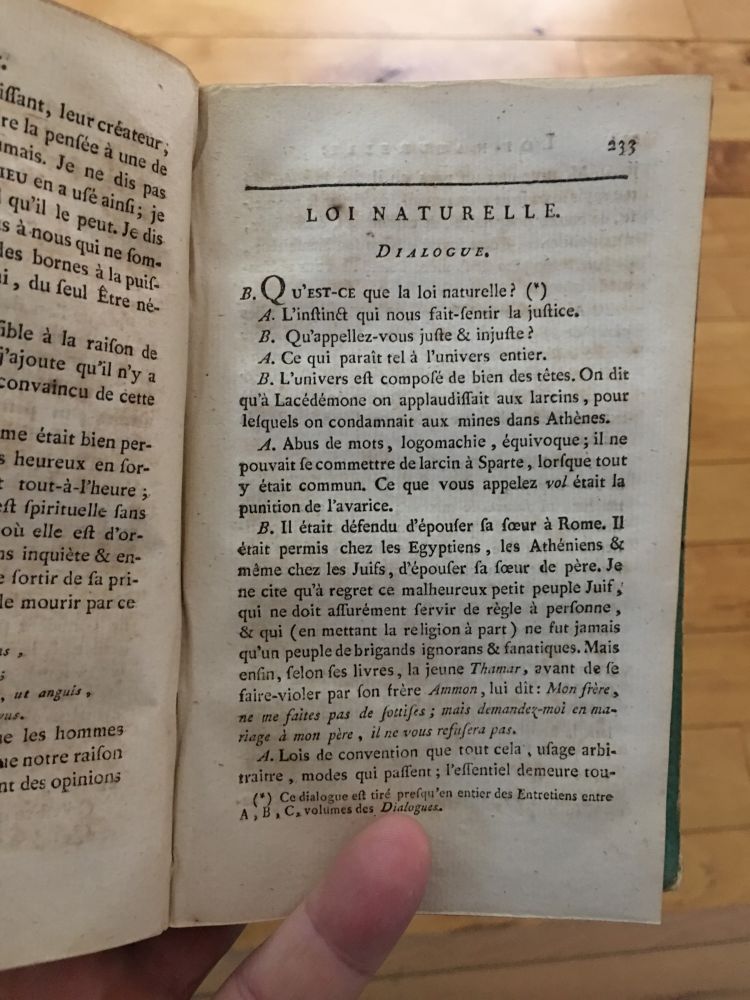 B: What do you consider just and unjust?

A: What seems that way to the entire universe.

B: The universe is composed of many minds[1]. I understand that in Lacedemonia they cheered those guilty of larceny that were condemned to the mines in Athens.

A: Semantic quibbling; one could not commit larceny in Sparta, because everything was held in common. What you call “theft” was punishment for avarice.

B: It was forbidden to marry one’s sister in Rome. It was permitted among the Egyptians, the Athenians, and even the Jews to marry one’s fathers’ sister. I observe with regret that the unfortunate Jews, who certainly don’t apply their laws to anyone else, and who (setting their religion aside) are a people of nothing but brigands, ignorant and fanatical. Finally, according to the books, the young Thamar, before being raped by her brother Ammon, told him, “My brother, don’t be silly, but ask for me in marriage from my father, he will not refuse you.”

A: Laws of convention all the same, arbitrary usage, passing fads; the essential remains: show me a country where it is honest to steal from me the fruit of my labor, to break one’s promises, to lie for gain, to defame, to assassinate, to poison, to be ungrateful to one’s benefactor, or to beat one’s parents when they bring you food.

(*This dialogue is pulled almost entirely from volumes A, B, and C of the Dialogues)

I assume Voltaire’s footnote is a reference to Plato’s Dialogues.

Voltaire, as a French aristocrat of his time, was antisemitic. There’s no excuse for it, he was skeptical enough about everything else that he was certainly capable of realizing that he was simply looking at another form of religious fanaticism to be dismissed along with all the rest. Yet, he did not. I always found that odd, since Voltaire grew up surrounded by the folly of the pre-revolutionary French court; surely he could have seen that calling the Jews ignorant and fanatical brigands hardly distinguished them from his own class.

What still amazes me about Voltaire’s Encyclopedia is that he wrote it – all of it – as a sort of side project. The volume this page was drawn from is one of 6, comprising around 500 pages each. If one were to try to assemble a collection of Voltaire’s writing, it would make anyone else who writes want to stand there and weep silent tears of envy.

Don’t Do This While You Are Driving » « It’s Not an F-35 But It Sucks Pretty Hard Anyway!